Not so long ago innercity Johannesburg had been written off by many investors. Now a new wave of large private-sector investments is set to make the old CBD desirable again, transforming previous ‘no-go’ areas and dilapidated or abandoned buildings into mixed-use urban spaces. These will create much-needed affordable housing and, according to Johannesburg mayor Herman Mashaba, help ‘close the chasm between the rich and the poor in our city’.

By the late 1990s, many corporates had moved north to Sandton and landlords had abandoned a large number of buildings, with some ‘hijacked’ by squatters or slumlords. Central Joburg was ‘slipping inexorably into ruin and decline’, says the study Taming the Disorderly City, which describes it as a ‘filthy, chaotic and uninviting place’.

Inner-city rejuvenation has been firmly on the city’s agenda ever since the Johannesburg Development Agency (JDA) was formed in 2001. The agency stresses that its work ‘is not about basic service delivery, but it drives spatial transformation, which is the heart of develop-mental local government in an urbanising South Africa’. To date, the JDA has been instrumental in revitalising Constitution Hill, Newtown, the Faraday Station precinct, upgrading Main Street and making it pedestrian-friendly, reconstructing and renovating the Drill Hall and developing the Fashion District. 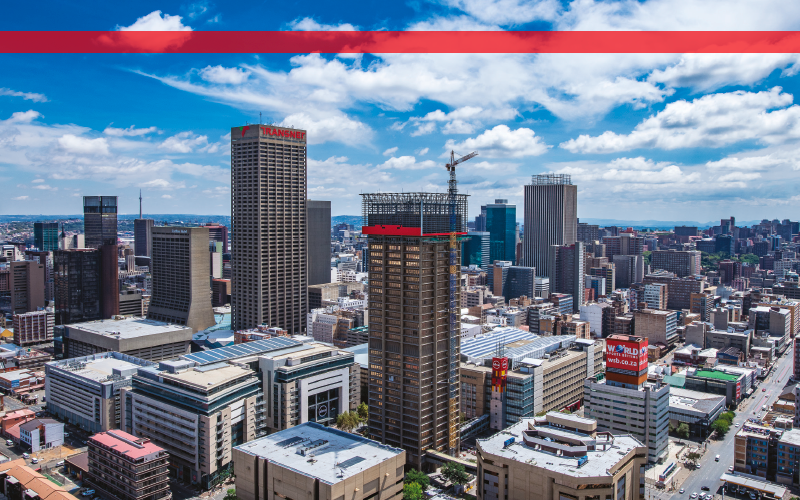 When it comes to choosing which innercity areas to rejuvenate next, the JDA looks at strategically important precincts that have a distinct identity and economic development potential and which are hampered by declining conditions, a poor public environment or a need for public services and infrastructure.

Earlier in 2019, city leaders proclaimed Johannesburg to be ‘on the cusp of great change’. This year could mark the turning point for CBD regeneration, with three massive bouts of private-sector investment backed by the public sector: the R1.2 billion Jewel City, R400 million Absa Towers Main, and an expected R20 billion worth of buildings made available to developers by the city.

These projects indicate that there’s a big appetite for repurposing existing buildings in the city centre. So big, that Thomas Chapman, founder of social impact architecture firm Local Studio, predicts that within the next five years there won’t be any building stock of scale left that’s suitable for adaptive reuse. ‘Most of downtown is already spoken for,’ he says. ‘It’s finite, like a non-renewable resource, so we won’t be able to rely on it in the future.’ 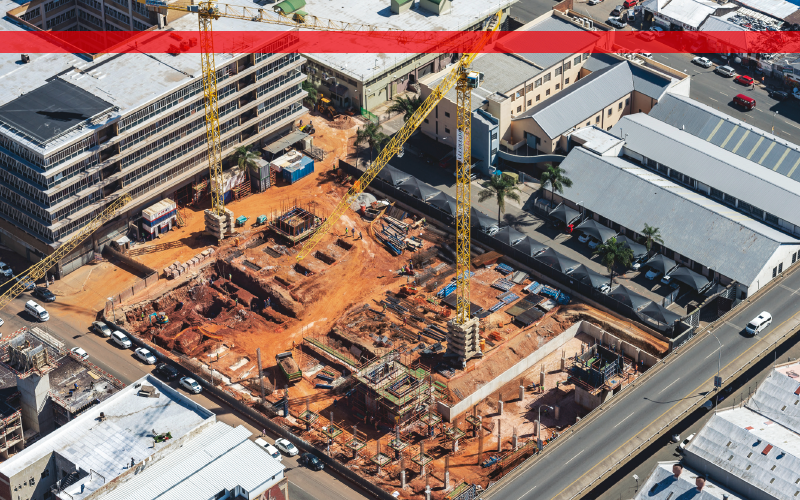 On the upside, this will mean that today’s tired, old – and often unsafe – office and industrial buildings will have found a new purpose. And that the provision of affordable rental housing is being attended to, enabling more lower- to middle-income earners to live closer to their workplace. Helen Botes, CEO of Joburg Property Company (JPC), which manages the city’s property portfolio, told attendees at the last AGM: ‘We said that we were going to turn the inner city into a construction site, and we have already done that. If you look around you will see cranes and construction taking place throughout the inner city.’

One of the sites with frenzied building activity is Jewel City, where Divercity Urban Property Fund is converting the previously walled-off diamond and precious-metals precinct into a modern, mixed-use urban neighbourhood. For decades, the six block-precinct in the eastern CBD was off-limits to the general public, because the high-value diamond, gold and platinum jewellery manufacturing that gave the precinct its name required heightened security.

‘There will be a crescendo of activity as those buildings that require less time for completion are progressively added to the active construction programme,’ says Derrick Pautz, development manager at local property developer and investor Atterbury. The group has a significant stake in Divercity, which is backed by Ithemba Property and Talis Property Holdings, with Rand Merchant Holdings Property and Nedbank Property Partners as cornerstone investors. The recently formed fund is injecting a total of R2 billion into Johannesburg’s urban renewal – a move that is hoped to revive investor confidence in the inner city. 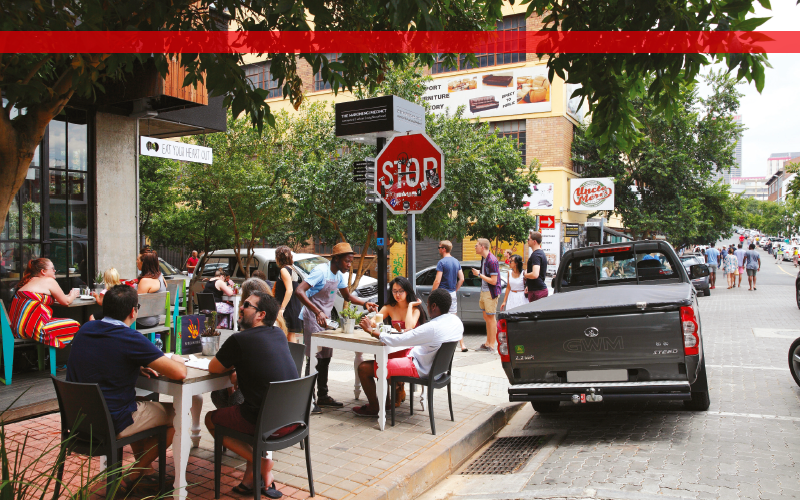 Divercity’s urban developments intend to be catalysts in redressing the spatial injustices of apartheid by bringing affordable rental apartments, amenities and socio-economic opportunities to the inner city. Jewel City, for example, will feature a school, a clinic, a gym, recreational facilities, a supermarket, fast-food outlets and restaurants. As well as 20 000 m2 of commercial space, it will also offer up to 2 200 new apartments, ranging from micro-studios to family-size two-bedroom flats. The first residents are expected to move in from November this year as the first floors of residential development are completed. According to Atterbury, the upper floors will be available first, moving down the buildings until all floors are finished, with the first phase due for completion in April 2020. 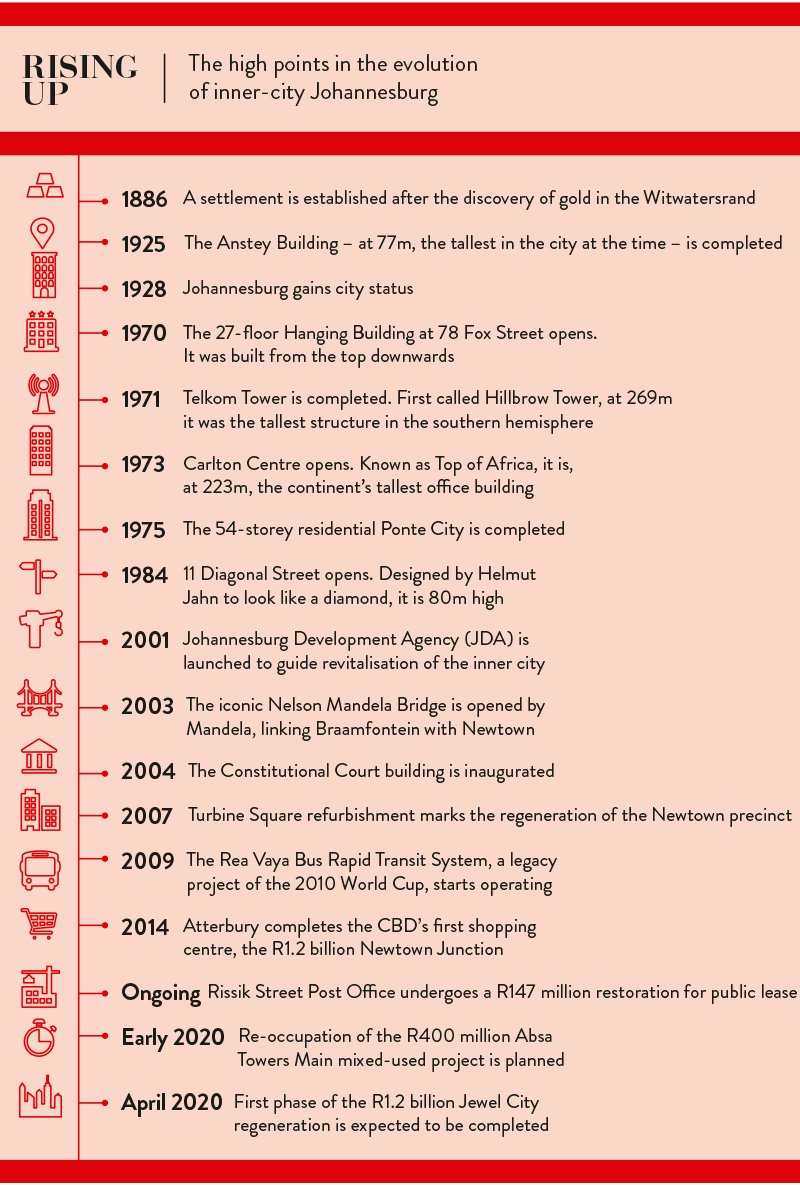 Gass Architecture Studios recently revealed its architectural design for Jewel City, which will see the facades of the existing industrial buildings – some dating back to the 1930s – being refurbished, repaired and decorated with local art, without substantially altering their external appearance. The precinct’s industrial heritage will be reflected by exposed concrete, brickwork and steel as well as in the naming of the buildings and public artwork. Less than a kilometre to the west, Divercity is repurposing a Joburg landmark, the 30-storey Absa Tower. The 130m-tall skyscraper is getting a dramatic makeover, inside and outside, with a completely new facade. 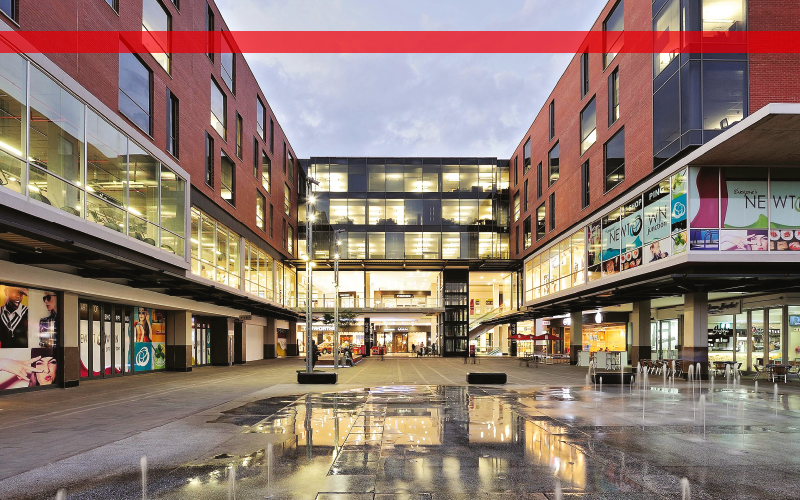 Once the R400 million Towers Main project is completed in 2020, Absa Bank will be leasing back nine floors of office space. A further 20 floors are being converted into 520 affordable rental apartments, which will be launched in phases, starting at the end of this year, while another level will be dedicated to coffee shops, restaurants and recreation facilities. ‘The building is very well suited to a residential conversion, with lots of natural lighting,’ says Pautz. ‘We’re using a special lightweight brick to limit the load on the existing structure. It is designed to be long-lasting, with quality, durable materials used to construct cost-effective, resilient units.’

On top of addressing the backlog in housing and amenities, Divercity’s projects set out to improve the wider neighbourhood and contribute to the city’s vision of raising the quality of inner-city life. There will be an urban park with trees, a children’s playground and a public square with sidewalk cafes. A pedestrian walkway with benches, lighting and street art will invite people to walk along Fox Street from Absa Towers Main through Jewel City to Maboneng – the trendy, rejuvenated precinct that Forbes magazine once named one of the world’s ‘coolest areas to live in’.

Although nearly 20 Maboneng buildings had to be auctioned off in April 2019 after owner Propertuity went into liquidation, the general outlook for this vibey precinct remains positive. Divercity has R400 million of residential accommodation under development in Maboneng, which together with Absa Towers Main and Jewel City will add more than 75 000 m2 of new residential space (more than 2 500 apartments in total) to Johannesburg by April 2020.

‘Creating affordable rental accommodation in a mixed-use precinct in a central city location gives wage-earning employees the opportunity to live close to work, which is extremely rare by global standards, and especially so in South Africa,’ says Tebogo Mogashoa, chairman of both Talis Property Fund and Atterbury Property Fund. ‘Besides the luxury of offering a short walk to work, the pedestrianised precinct is also integrated with public transport for those who travel further.’ 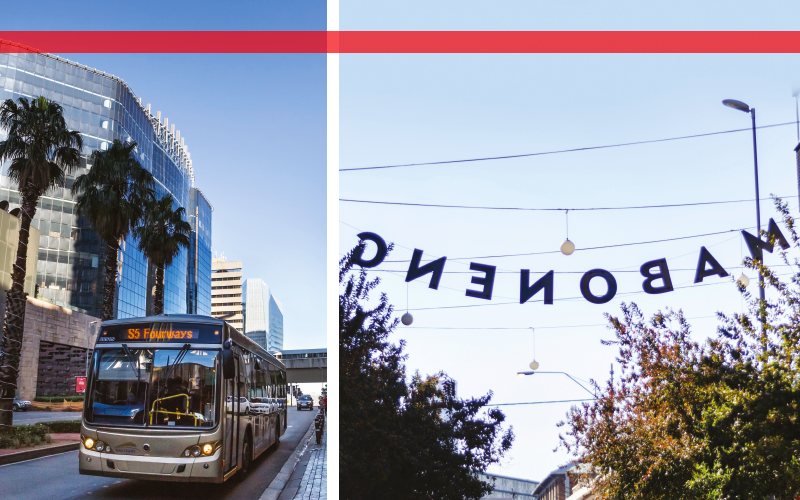 Another benefit is the safety aspect, which is crucial for a city that is struggling with high crime rates. Experience has shown repeatedly that ‘live, work, play’ precincts that are busy around the clock tend to be significantly safer than city areas that are deserted at night and on weekends. ‘We firmly believe that this and similar developments will help curb crime in urban areas,’ says Jewel City architect Georg van Gass.

In May, the city launched a quick-reaction anti-crime unit specifically for the inner city. Eighty police officers are reported to be on standby, working undercover in crime hotspots. In addition, they monitor the city’s CCTV cameras, which are equipped with numberplate- and face-recognition technology.

In April, Mashaba announced another massive boost for the Inner City Revitalisation Programme when he officially handed over 24 developments consisting of 84 properties to private developers who will invest R20 billion, with construction beginning within six months.

‘These developments are predominantly mixed-use, with emphasis on affordable residential units, affordable student accommodation and affordable retail spaces for SMMEs,’ he said. ‘In total, this first group of developments is expected to also yield 10 096 job opportunities within the city and up to 6 500 housing units costing [from] R900 per month per unit – excluding utilities – to R4 500 per month. Though plans are still in the approval phase, it is expected that 1 500 of these will comprise student beds.’

Mashaba added: ‘This is just the start of the change we are bringing to the city, with even more buildings and developments set to take place in the future.’ This could also be the start of city planners and architects tackling challenges such as Johannesburg’s heavy reliance on cars and its need for open public spaces.

Chapman, whose firm strives for urban regeneration that has a social impact, sees great opportunity to effect urban change in Johannesburg. Or as he puts it: ‘We’re lucky to have a poorly planned and ugly city that welcomes change.’