The Gautrain was one of the best things that could have happened to Rosebank. As part of a Fifa World Cup legacy project, it integrated the suburb into Johannesburg’s rapid commuter network, linking it to OR Tambo International Airport and Sandton. Expansion plans are under way that could see a further 150 km of track added to the current network of 80 km, thereby easing traffic congestion and making Rosebank even better connected.

‘The June 2011 opening of the Gautrain Station in Rosebank’s Oxford [Road] has caused a flurry of activity in the property market, with new builds and revamps of older office buildings,’ Jane Parker, Broll area specialist and commercial broker, said at the time. Today, she says, Rosebank is transformed. ‘It’s vibey; it’s trendy. Everybody wants to be here.’ 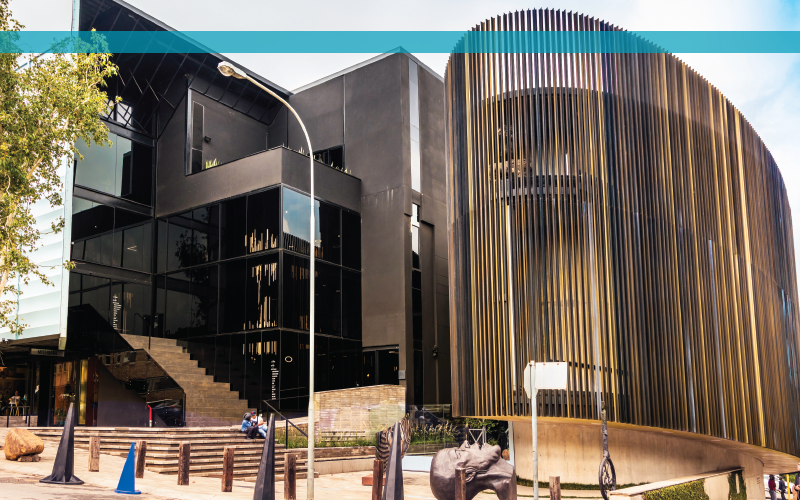 This is partly a result of the Gautrain station and the efficient public transport, but insiders argue that the area would have boomed anyway because it’s such a well-positioned node – one of the city’s priority development zones – and that it is attractive to both commercial and residential property investors.

Since 2013, more than R7 billion has reportedly been invested into revamping the area. ‘Rosebank has developed at a tremendous pace in recent years and is today undoubtedly one of Johannesburg’s fastest-growing and most fashionable places to be,’ says Rupert Finnemore, Gauteng regional head at Pam Golding Properties. In a media statement he describes it as a ‘vibrant mixed-use commercial, retail, entertainment and residential hub’ that has evolved into ‘a favoured destination’ of Johannesburg residents.

He adds that central Rosebank is seen by many investors as offering advantages over nearby Sandton, not least because it’s less severely impacted by high traffic volumes. 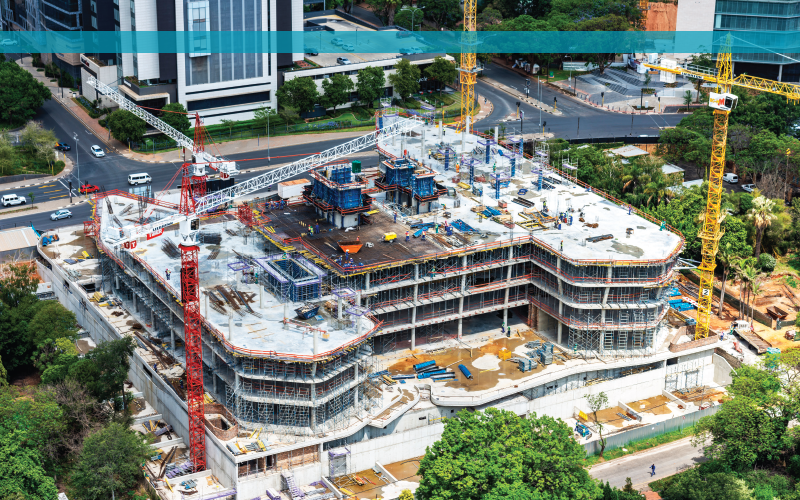 The Gauteng Tourist Authority describes Rosebank as halfway – physically as well as metaphorically – between the Johannesburg CBD and Sandton. ‘Where Joburg is edgy, gritty and cosmopolitan, and Sandton is sophisticated, fast and easy, Rosebank’s identity is welcoming, grounded, trendy and creative,’ according to the official online gateway, which also proclaims that ‘all roads lead to Rosebank’.

Architect Rudie Botha refers to Rosebank as the smaller pedestrian Sandton. ‘The area is growing and businesses are moving here,’ he says. ‘But the scale is still human, with great suburbs in the surrounding areas.’

His co-founded company, Werkhof Architects (which focuses on the ‘sensitive and humane’ design of residential, commercial, industrial buildings) has been operating from the Zone in central Rosebank since 2016. The location was chosen because the team wanted to be in the midst of the hustle and bustle of the centre, allowing them ‘to interact with the people we design for’. 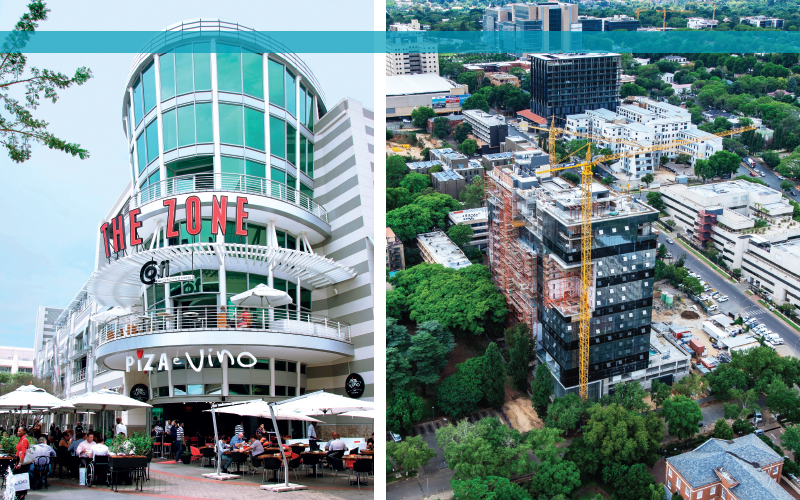 Botha, whose offices feature a ‘living wall’ (an indoor vertical garden of greenery), notes the thermal comfort that vegetation brings to the urban environment. ‘The main difference between Rosebank and, say, Sandton is that the flora in the area makes it fresh and attractive. I always feel much cooler here, thermally speaking. This is because of the established trees and fauna.’

The tree-lined streets and pavement cafes add to the aesthetic appeal of Rosebank. Between early October and November, there’s the added charm of the Jacaranda trees that transform areas such as Tyrwhitt Avenue – on either side of Oxford Road – with their purple blossoms.

Some of the new developments, which increasingly pay attention to sustainability and green building aspects, incorporate various forms of gardens and indigenous plants. Rosebank Link, the 15-storey steel-and-glass office tower developed by Redefine Properties, has been designed with indigenous plants growing in executive roof and podium-level gardens as well as vertically along the parkade wall. This brings a touch of nature into the skyscraper, which has a 4-star Green Star Office Design v1.1 rating. Its address couldn’t be more central – 173 Oxford Road – with direct access to the Gautrain station, the Zone and Rosebank Mall. 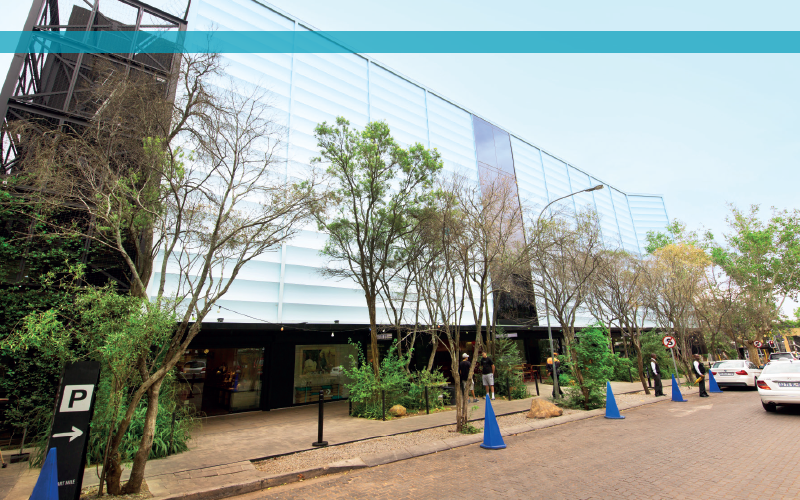 In lower Rosebank, the Thirty Keyes apartment complex – set to break ground in early 2019 with completion expected by the end of 2020 – will encircle a green courtyard. Landscaping studio Fieldworks has already selected indigenous highveld grasses, shrubs and perennials to re-establish the vegetation that originally grew in the Witwatersrand region before Johannesburg was built.

The courtyard and roof garden apartments come with their own landscaping packages, which will allow buyers to choose between a low-maintenance indigenous option, an organic ‘forager’ package with year-round edible plants and produce, and a do-it-yourself gardening option.

The site is diagonally across from the Keyes Art Mile, which is home to the Everard Read Gallery, the iconic Circa Gallery (built in 2009 as an elliptical structure featuring 400 10m-tall aluminium ‘fins’) and, more recently, the Trumpet building, which opened its doors in 2016. 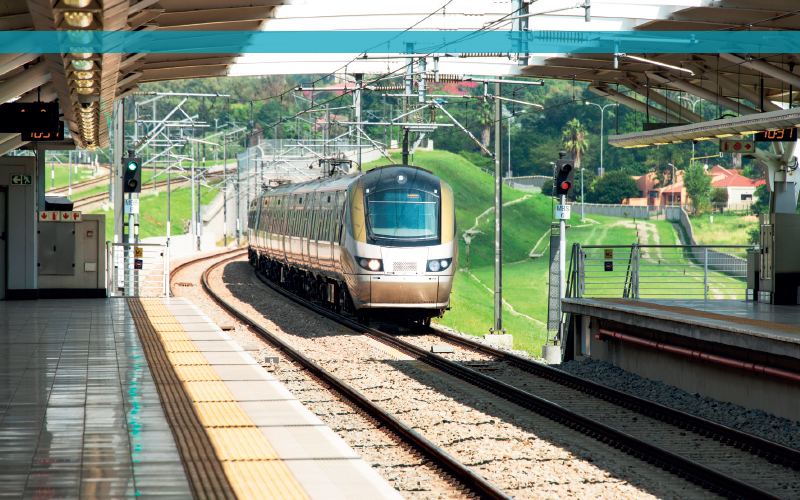 Designed by architect Peter Swanepoel of StudioMAS and developed by Tomorrow Co, the Trumpet has attracted arts and design-focused tenants as well as trendy eateries. Celebrity chef David Higgs’ acclaimed rooftop restaurant Marble promises ‘not just a plate of food but a theatre of experience’. As a free side dish, diners are treated to spectacular views over the city.

Developer Anton Taljaard points out the ‘unmistakable Joburg vernacular’ of the upcoming apartment complex on Keyes. ‘It’s a place that encompasses what the Art Mile is all about – convenience, old-school values, significant architecture, well-considered design and good art.’ He told the Rosebank Killarney Gazette recently that the site was chosen for its location on the ‘golden mile’ from Braamfontein to Sandton, where the city planners are seeking to increase housing density. In addition to being on the doorstep of trendy restaurants, bars and art galleries, the curated neighbourhood of the Keyes Art Mile is within walking distance of public amenities such as the Gautrain station, Netcare Rosebank Hospital and excellent schools, including St Theresa’s Convent, Kingsmead College and Rosebank Primary.

‘The beauty of Rosebank is that it invites people to walk around because it’s compact and pedestrian friendly,’ says Parker. She explains that the Rosebank Management District has been instrumental in improving the central area, which at one stage experienced a bit of a lull. 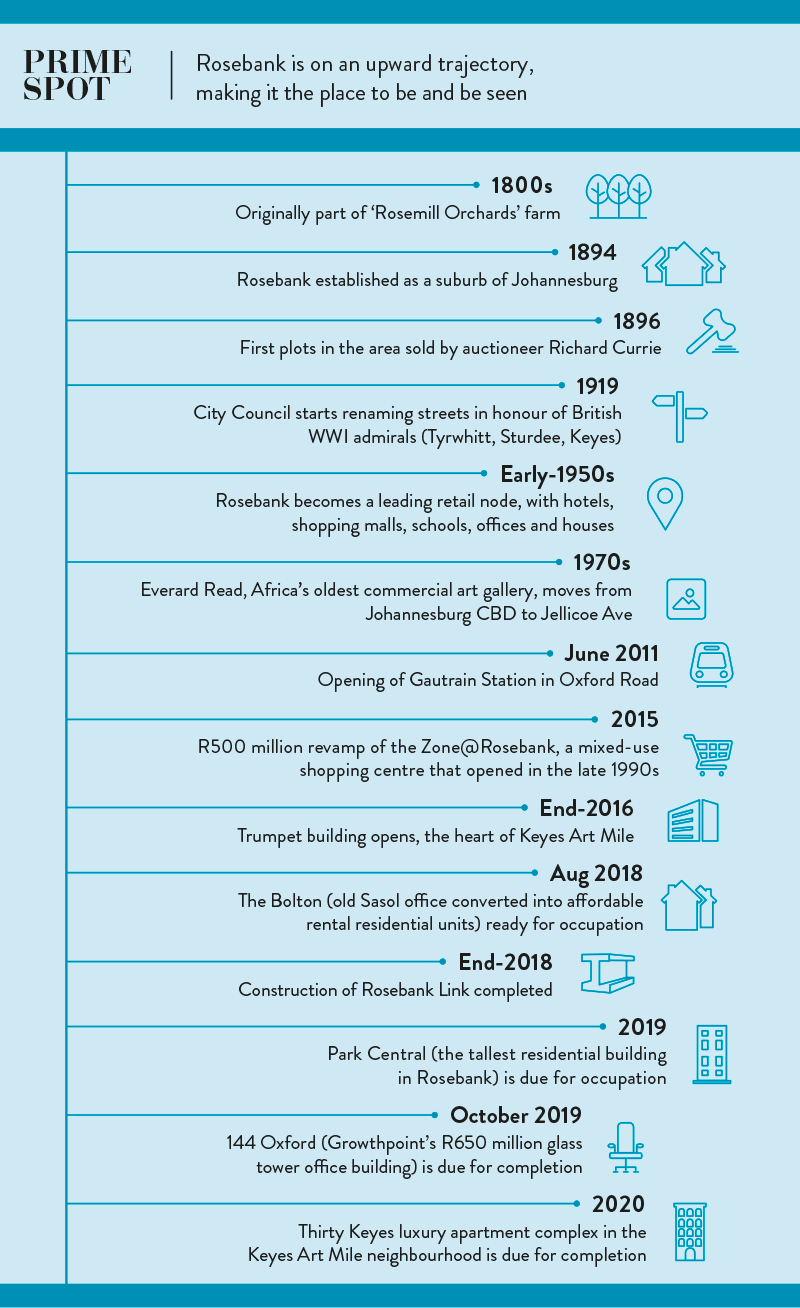 The suburb’s desirability has also been boosted by the careful refurbishment of old buildings, where the original architectural features have been retained and enhanced with modern finishes.

The revamp of the 1930s Fire Station, for instance, took care to balance the old with the new, ensuring that the modern offices complemented the original art deco character rather than imitating it.

Another example is the Conservatory. ‘The old office building on Baker Street has undergone a refreshing refurbishment, with great retro design that is trendy and unique,’ says Parker. ‘The new boutique-style units are available as a sectional title purchase as well as a rental offering.’

Broll’s office market report for Rosebank (September 2018) notes the area is also seeing old-style offices being converted into affordable rental residential accommodation. The old Sasol building has been transformed into the Bolton, a complex with contemporary rental apartments for young professionals, ranging in size from 30 m2 and 60 m2. The building has a pool, a boardroom, biometric access control and free WiFi.

Another trend identified by Broll is the demolition of old buildings to make room for new high-rise apartments, such as the Vantage, Tyrwhitt and Median. The report lists another demolition project: ‘The Galleria site, previously home to Times Media, has been demolished, with construction due to commence on a 90 000 m2 mixed-use precinct comprising offices, retail, a hotel and serviced residential apartments.’ 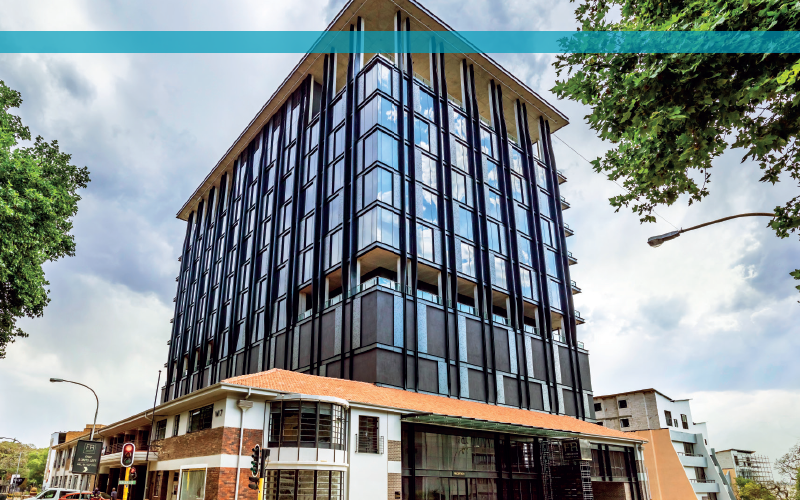 The monthly rental cost for A-grade office space in Rosebank starts at R175/m², according to Broll, with certain P-grade buildings achieving up to R250/m². The company also notes a demand for P-grade offices with parking ratios of five bays per 100 m² of office space.

‘Rosebank has been very successful on new speculative developments, despite the economic environment,’ states Broll. ‘Rosebank Towers was fully leased out on completion […] the Fire Station development has a few small pockets left, the Conservatory has a full take-up both on sectional title sales and rental. This track record bodes well for 144 Oxford Road.’

The 35 000 m2 P-grade office project, which is marketed as the gateway to Rosebank, broke ground in the first quarter of 2018. The striking building being erected on Oxford Road will com- prise two interlinked office towers and a centralised office core with a multi-volume atrium.

Growthpoint describes it as ‘eye-catching’ and ‘breathtaking’, featuring a spectacular glass facade that offers exceptional views across the city. The energy-efficient, smart building is aiming for a 4-Star Green Star certification.

Further along Oxford Road, the first phase of the 300 000 m2 Oxford Parks Precinct has been under construction since April 2017. The medium-density, mixed-used project targets a 4-Star Green Star Sustainable Precinct Pilot Rating and, in addition, each building will individually strive for a minimum 4-Star Design certification. ‘The vision is to create a sustainable public environment that will assist in supporting the longevity of the investment by making an attractive, pedestrian-friendly precinct with well-managed infrastructure,’ says Carollyn Mitchell, director at developer Intaprop. 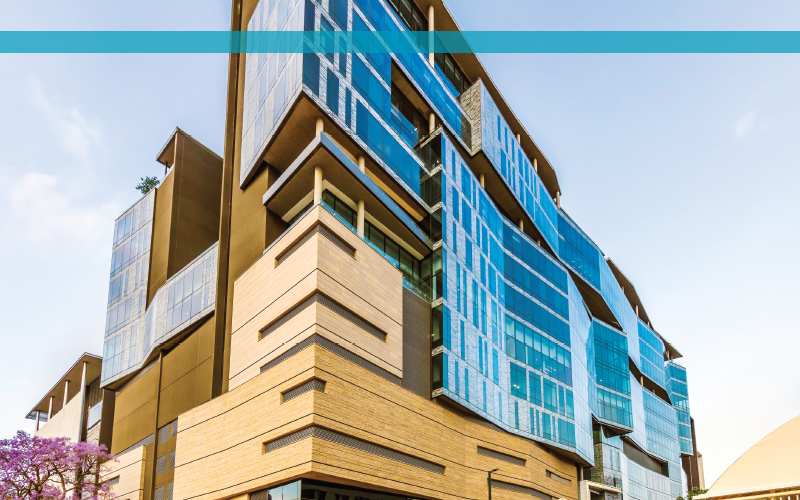 In order to seamlessly integrate with the rest of the city, there will be no fences around the precinct, which stretches from Illovo to Rosebank along Oxford Road. According to a media statement, passive surveillance design techniques have been implemented to increase the security and well-being of pedestrians. Furthermore, the friction of the road surfaces will increase incrementally from Oxford Road towards Cradock Avenue, to slow down cars and make drivers aware of pedestrians and cyclists.

The first building in the precinct, with BP as the anchor tenant, on the corner of Oxford and Jellicoe roads, was due for completion by the end of 2018. The six-storey structure has a high-performance building envelope and strives to operate optimally right from the start, targeting a 5-Star Green Star Office Design v1.1 rating for its energy-efficient, sustainable design.

The construction activity that is adding ever more high-rise buildings to the skyline has likened Rosebank to a Johannesburg version of Manhattan. But while the two inner-city suburbs may both exude a cosmopolitan, big-city atmosphere and trendy lifestyle, Rosebank seems to be on a more sustainable building trajectory than New York, steering towards an urban future that is less concrete jungle; more people-centric.