Nearly 14 years ago, an old building, with a damp, derelict basement at the corner of Roeland and Buitenkant streets caught the eye of Mervyn Sloman. ‘It was a shell of a building, with a hole in the ground floor so you could see straight into the basement,’ he says, and describes how this space – opposite the landmark Kimberley Hotel near Parliament – seemed a good fit for his new bookshop. ‘I had already been looking all around central Cape Town and the outskirts for many months to find the right space,’ he adds.

It was Sloman’s wife who saw the potential in the historic corner building that, once renovated, found a new purpose as the Book Lounge. Since opening in December 2007, the shop has become a favourite destination for literature lovers to discuss and buy books, as well as for authors to launch their books. It has won awards for ‘best independent bookshop in SA’, and with its charming interior – a large chandelier, tall wooden shelves and tables stacked with books, as well as couches and armchairs enticing customers to stay – attracts a loyal client base to the increasingly popular East City Precinct.

This part of the City Bowl (situated between Cape Town’s CBD and District Six) is evolving dramatically, with new buildings going up and old ones disappearing or being re-purposed. 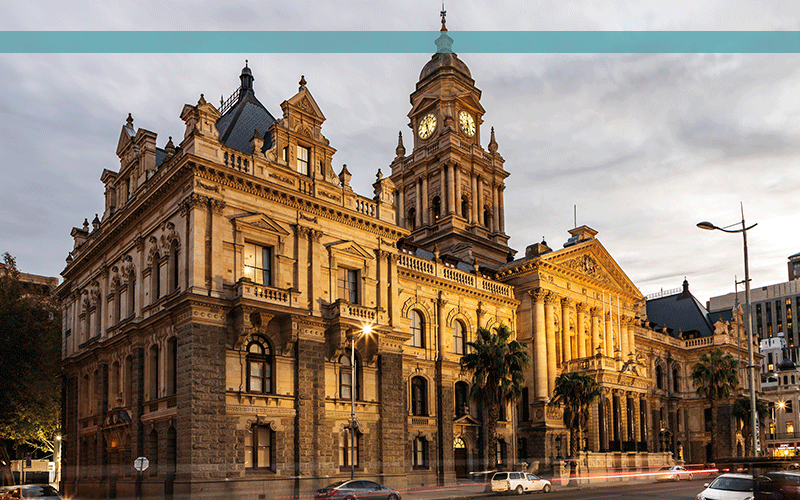 ‘The East City is special to me as it is historical, dynamic, creative, varied and central. Like the east side of many cities, there’s a mix of old and new, of work, industry and vibe,’ says Crane Briggs. ‘It’s very Cape Town in that it’s multicultural, with a magnificent view of Table Mountain, but also retains evidence to its very painful past, such as the forced removals from this area during apartheid.’

The once-gritty commercial area has been likened to London’s Shoreditch or New York’s Meatpacking District, as its commercial heritage buildings are being converted into micro apartments and its pulsing nightlife draws a younger crowd to the area. The thriving coffee culture has brought more than 60 coffee shops to the CBD alone, with the East City featuring Haas Coffee, the Parisian-style Swan Café and roasteries such as Kamili, and the steampunk-themed Truth Coffee, which was twice named ‘world’s best coffee shop’ by the UK Daily Telegraph. Progressive businesses such as the plastic-free, natural grocery store Nude Foods are driving the city’s ‘sustainable living’ movement.

Yet it’s not all about having fun and being hip. ‘Some important South African institutions are based in the area, from the City Hall and Central Police Station, Home Affairs and the Old Granary – now the Desmond and Leah Tutu Foundation – to the District Six Museum,’ according to Crane Briggs.

‘There’s been a deliberate effort and hard work, over many years by different stakeholders from government to graffitists, to make this precinct work in various ways and to be a cultural quarter. I appreciate this planning and the sometimes difficult decisions made.’ A key driving force in this is the Cape Town Central City Improvement District (CCID), which was established in 2000 as the first of its kind in SA. The NPO oversees a total workforce of about 600 people, among them large cleaning crews who remove litter, cigarette butts and graffiti tagging from the streets. Its highly visible public safety officers patrol the CBD on foot and by vehicle, around the clock, every day. The East City is one of four precincts managed by the CCID in the 1.6 km2 city centre area – the others being the conferencing, hospitality and financial precinct; the retail hub and heart of the CBD; and the parliamentary and legal precinct. The boundaries of the East City stretch along Parliament and Adderley streets, Cape Town Station and the Grand Parade (Darling Street), Canterbury Street and Roeland Street.

‘For many years this precinct has been the heart of the design and craft economies of the Central City, and it is still the trendy precinct people flock to at the weekend,’ says the CCID in its 2019 State of Cape Town Central City report. ‘In the past four years, the Central City’s most characterful precinct has come into its own in terms of its investment value and potential.

‘In 2018, three major developments were completed, including the upgrade of the Cape Town City Hall (R27 million) and the Old Granary (R31 million), with 2019 seeing the completion of the R75 million five-star boutique hotel, Labotessa. At least R265 million worth of property was either completed, under construction or in the planning or proposal phase in the East City in 2019. This includes redevelopments, refurbishments, upgrades and new developments,’ it reports. But that was before COVID-19 hit, with its devastating impact. One of the latest casualties in the area was the legendary Fugard Theatre, which closed permanently in March 2021 and is available for a new tenant. In search of uplifting news during the crisis, the CCID reported in September 2020 that the East City Precinct was ‘holding its own with property sales and developments worth millions of rands continuing in spite of the coronavirus pandemic causing economic upheaval’. This was partly thanks to the Harri, a R70 million mixed-used apartment block under construction in a modernist Art Deco building at 75 Harrington Street.

‘We sold right through lockdown and are on track to complete construction in June 2021,’ says Jeff Kleu, co-developer at Sepia and Silk, the company behind this upmarket ‘aparthotel’ development. He says that the drop in interest rates as well as a tax incentive via the Section 12J scheme helped drive the off-plan sales, attracting local investors as well as those from Germany, the Netherlands, Australia, Zimbabwe and Hong Kong.

Investing in an ‘aparthotel’ such as the Harri, with its 48 micro and loft apartments and trendy communal living and working spaces, offers flexibility in uncertain times, because buyers can either treat their apartment as a personal residence or add it to the existing pool of rental units. By April, just 12 studio apartments (starting at 24 m2/R1.4 million) and two of the six double-storey loft apartments (priced at R2.5 million and R2.7 million) were still available. ‘The whole building is a celebration of the mountain,’ says Kleu. ‘The stunning views of Table Mountain start from the second floor upwards, and the loft apartments have views of both the mountain and the harbour, presenting an uninterrupted panoramic vista from their seventh-floor balcony.

‘From a capital value point of view, the precinct is experiencing an upswing as new life is breathed into the area and more buildings are coming online.’

Just up the road at 84 Harrington Street, a new R120 million mixed-use development is under way. According to the CCID, Wolf & Wolf Architects is behind the building, which will feature retail units, a restaurant, coworking space and residential living. Nearby, another project (Kesler) by affordable co-living developer HOMii Lifestyle is also under construction, but details are still to be confirmed.

The urban co-living and working trend is also taking off at the other end of the East City, where the 50-year-old family-owned Townhouse hotel is being re-purposed in Plein Street. The Petousis family (who still own the Vineyard hotel in Newlands and the Oude Werf in Stellenbosch) had to permanently close the Townhouse in March 2021 due to the COVID crisis. They entered into a partnership that will turn the traditional hotel into the Neighbourgood East City, a serviced building offering ‘more than 100 thoughtfully designed co-living suites’ from R7 500 a month. Murray Clark, CEO of the new owner, property developing firm Neighbourgood, says ‘our plans for the property envisage connected communities of young working professionals. This vision aligns well with the revival plans for the precinct and the people who are making the inner city their home for both work and play’.

Crane Briggs says she enjoys the diverse mix of people in the area, and the energy during the week as they move about purposefully, while Kleu comments on the appeal of ‘hidden nooks and crannies, and sneaky passageways’ that only reveal themselves once you explore the area. 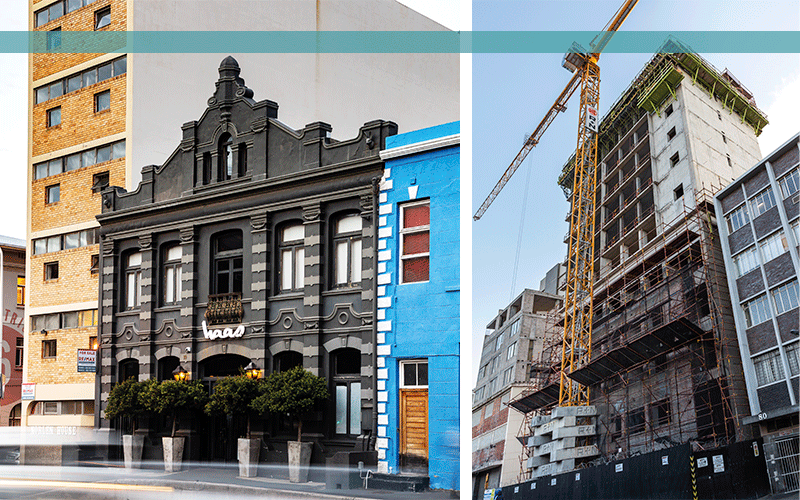 ‘There’s an alley being converted by Nude Foods where you can have lunch, just opposite New York Bagels,’ he says. ‘Another alley at SurfaRosa connects two buildings, and is hugely popular at night. Seed and Circus has a courtyard in the back, and Truth Coffee has a hidden cocktail bar where you need to phone in advance. We will activate our alley between the Harri and the building next door. All these little features complement each other and add to the mystique of the area.’

This rise in interest and foot traffic will also benefit the long-time businesses in the precinct, such as the Portuguese Dias Tavern, Italian restaurant Cousins, Roeland Liquors and Charly’s Bakery (which has its own reality TV show, Charly’s Cake Angels). And, of course, the Book Lounge. Sloman says he still believes he opened his bookshop in the right place. ‘When we started out nearly 14 years ago, there was a sense of possibility in the area, of something about to happen,’ he says. ‘You walked down the street to find that one building had been refurbished, the one next to it was falling apart, and the third would be somewhat in between. Today this ratio has changed, with far more new or revitalised buildings than derelict ones.’ Yet the one thing that has not changed for him about the East City is the feeling of possibility.