The shrieks and laughter that used to accompany the amusement rides at Ratanga Junction have been replaced with the sound of demolition and construction machines. Billed as ‘the wildest place in Africa’, the theme park closed its doors for good in May 2018, after providing nearly 20 years of family fun in Century City – the multi-use development just outside the Cape Town CBD.

Ratanga’s nearly 120 000 m² of Indiana Jones-style land with rivers, palm trees and subtropical landscaping is undergoing a complete redevelopment. Over the next few years, the area will be transformed – featuring new offices, residential apartments, a hotel, retail units and a retirement property, among remodelled waterways that are framed by established vegetation and, as a backdrop, offer a postcard view of Table Mountain. 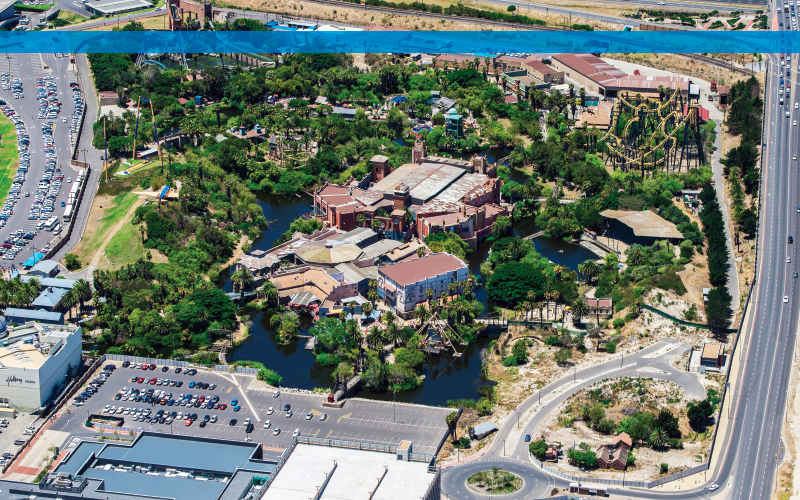 ‘Ratanga existed on borrowed time,’ says John Chapman, director at Rabie Property Group, which has been the driving force and sole developer of Century City since 2004. ‘It was ageing rapidly and requiring constant maintenance, which was not funded sufficiently by the influx of visitors. The business model on which it was originally based did not deliver the expected results, even over the long term.’ Today, all the rides have been removed. The popular Monkey Falls was scrapped along with the remaining water rides, while some of the other attractions were stripped, refurbished and shipped to new homes. 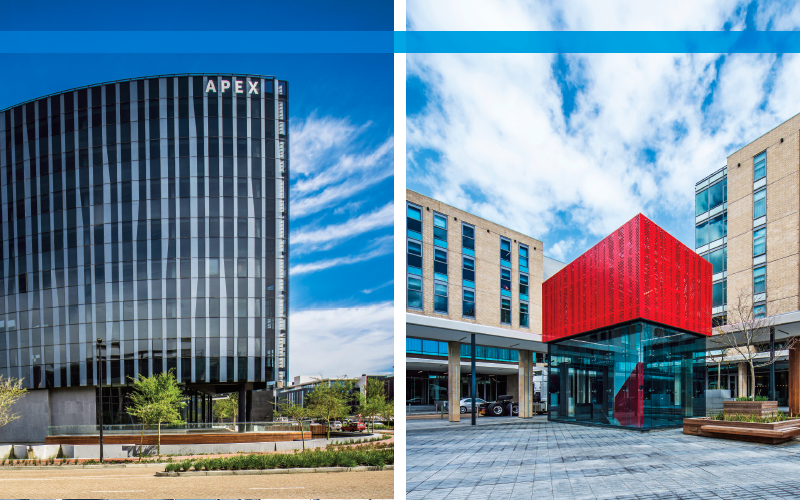 The massive Cobra roller coaster, for instance, is now entertaining thrill seekers in the US. The Congo Queen (a giant swinging boat that was painted gold and renamed ‘African Queen’) has been given a second lease of life in a new Mamelodi shopping centre, together with three other rides. Two further attractions, Crocodile Gorge and Diamond Devil Run, had already made way for the construction of the R1 billion Century City Square project around the conference centre that was opened in 2016. ‘Robbie Ross is currently on site, demolishing the old Ratanga buildings,’ says Chapman. ‘As part of the Ratanga legacy, we’re retaining the train infrastructure and are investigating rerouting the tracks to offer a leisurely, scenic ride along the waterways.’ Where possible, the theme park’s lush, two decades’ worth of vegetation will also be retained in the new Ratanga precinct. Any plants not reused will be donated to community organisations and public facilities, such as Lentegeur Psychiatric Hospital in Mitchell’s Plain. 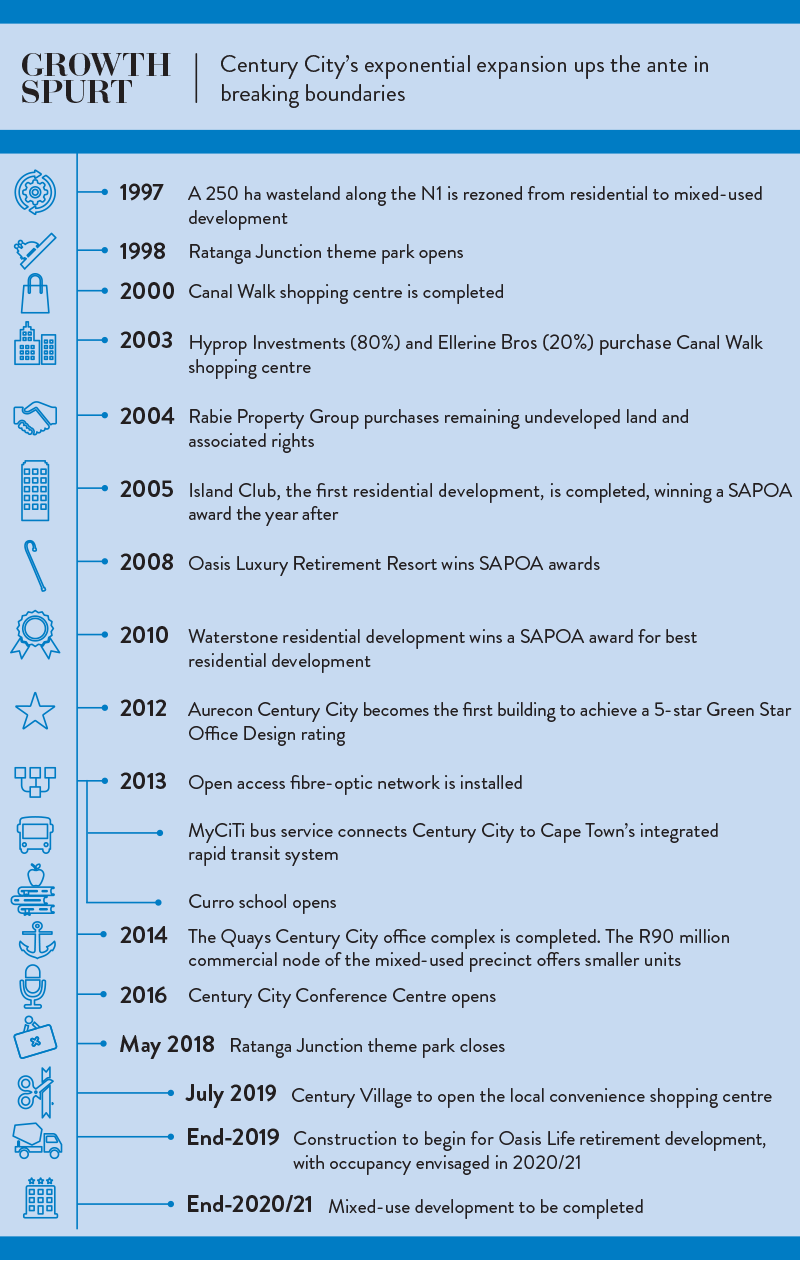 One big drawcard will continue to be water, which is the recurring theme in the ‘city within a city’ that is Century City. At the heart of its 250 ha footprint lies the 16 ha wetlands nature reserve, Intaka Island, which serves as a natural purification system for the surrounding waterways. The protected area attracts more than 35 000 visitors a year and is home to around 120 species of birds and 177 indigenous plant species, some of them threatened and on the Red Data list.

As part of the redevelopment, Ratanga Junction’s original water features are being remodelled and enlarged, boosting the appeal of the canal network that incorporates 8 km of navigable waterways. At the core there will be a new island – a green lung similar to Intaka.

Chapman points out, however, that unlike the Intaka nature reserve with its ecological conservation mandate, the new Ratanga island will primarily be a public green space for people to enjoy. ‘Visitors, residents and office workers will be encouraged to walk and jog across the bridge, and sit and reflect on the water and in surrounding gardens,’ he says, adding that it will also enable canoeists and stand-up paddlers to venture further on the canals than the current lock system allows.

‘Many of the water-based sport activities, the weekly parkrun and other community events will use this new scenic public realm. A pedestrian bridge over the Grand Canal will link the Ratanga redevelopment with the Bridgeways precinct,’ he says, summing up: ‘Water adds value to our development.’ Therefore all Rabie’s new residential units in the redevelopment will have a view – either across the waterways onto the green island, or towards the mountains and Table Bay.
The upcoming retirement development – Oasis Life Century City, planned to consist of 250 apartments spread over 10 to 12 storeys – will also feature water. The development will be situated along the waterways where a boardwalk will invite residents for a stroll or to sit on benches. ‘Historically, Century City was a neglected, waterlogged and windswept section of land,’ says Chapman. ‘The area was called “sewe pannetjies” – seven pans – as it included seven ephemeral or seasonal water pans that used to get very wet in winter and dry in summer. Even though the multi-use development is not built near a natural river, it benefits from having a high water table.

‘The initial vision of Century City originated with Martin Wragge, then the CEO of the original developer Monex, who said, “Let’s make the water an asset”.’ Wragge is credited with creating the canal system and Intaka Island, as well as laying a water pipeline from the Potsdam municipal wastewater works to Century City. That was in the late 1990s, and today the managed wetlands help maintain the water quality in the canals. ‘It turned out to be an engineering feat, as the stormwater would have flooded this area if we had built up the entire land,’ says Chapman, adding that the recycled effluent made available from the Potsdam plant is treated to a level that is suitable for irrigation. The Century City Property Owners’ Association (CCPOA), which is in charge of the day-to-day management of the suburb, now exclusively uses the treated affluent for watering the common areas and the various residential and commercial complexes. Treated effluent is also used to run the cooling systems and flush toilets in the precinct’s green star-rated commercial buildings. The recently completed Sable Park office buildings (home to Discovery’s regional head office) already have dual plumbing systems for this purpose, as do the Palme Vue and Axis residential buildings. The CCPOA has urged commercial owners to retrofit their buildings with systems that use non-potable water for flushing – something Canal Walk shopping centre started to implement during the 2018 drought. 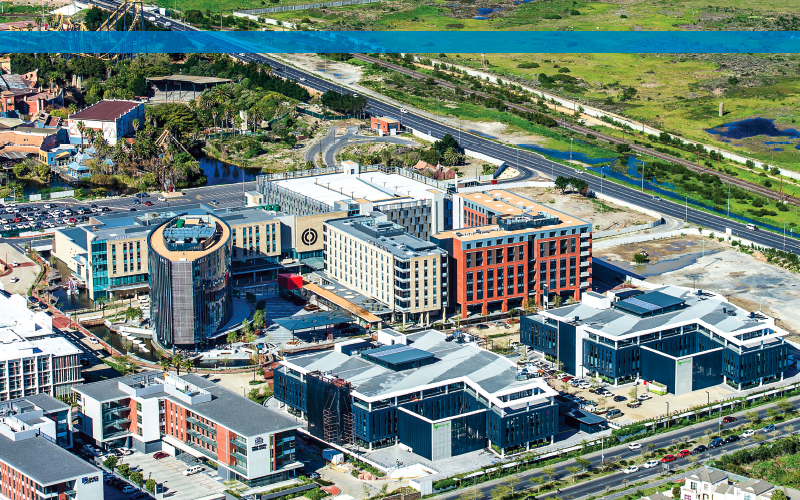 There is also talk of Rabie taking some of its investment properties off the water grid, including hotels and the conference centre. ‘With the current cost of the [treated effluent] water well below potable water the current economic benefit will only be further accelerated as the financial cost of municipal water starts to reflect the shortage and environmental impact,’ states a document outlining the node’s green initiatives.

Century City, which according to Chapman, had 22 green-star rated buildings by early 2019, is striving to achieve the highest concentration of green buildings in one precinct. The Bridgeways precinct incorporates an ever-growing number of such environmentally sustainable buildings, including those around Century Square at the conference centre, as well as Astron Energy, Bridge Park, Absa, No 3 Bridgeways (home to Philip Morris), and the business centre.

Meanwhile the construction of Sable Corner, a glass-fronted office block that is the last in the series of buildings on Sable Road, is under way. Access to the site has been unlocked as part of the Ratanga redevelopment. Another project will kick off in mid-2019, using land that currently serves as a Virgin Active parking area (which in turn will be moved into a structured parking deck). The planned mixed-use development will feature an 80-roomed hotel with a courtyard. ‘At present we have a combined 540 rooms across the Century City Hotel, Marriott, Colosseum Luxury Hotel and StayEasy, but we need more rooms to service the conference centre,’ says Chapman. ‘Next to the new hotel we’re planning about 96 small apartments to accommodate first-time homeowners.’

There are also plans for another large office building on Sable Road, two levels of underground parking and affordable smaller offices (from 100 to 150 m² upwards), as well as some retail and a showroom – all in one development on one erf. At the opposite end of Century City, near Curro School, a convenience shopping centre is nearing completion. Called Century Village and modelled on Palmyra shopping centre in Claremont, it will have Spar as an anchor tenant and hand-picked retailers, including a bottle store and a pet shop. 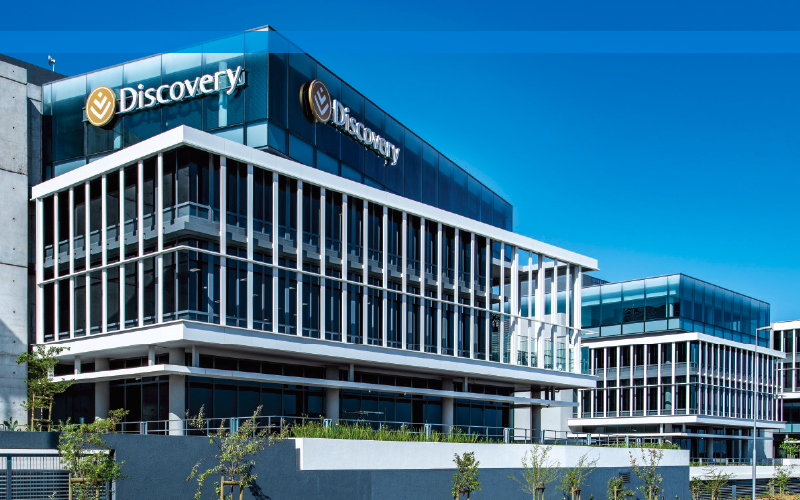 The CCPOA conducts regular surveys to find out what the commercial and residential property owners want, and noted a demand for a small, local shopping centre that would allow residents, office staff and parents on their school run to shop without having to navigate the three levels of paid parking and sheer scale of Canal Walk. ‘We listen to our members,’ says Chris Blackshaw, chief executive of the CCPOA, which runs Century City like a mini municipality and is responsible for security, management, landscaping and cleaning, among other things. ‘One of our early challenges was how to inject some soul and heart into the precinct,’ he says. ‘We started by forming sports clubs such as canoeing, stand-up paddling and athletics for both residents and office workers. We involved the big corporates in touch rugby and five-a-side soccer leagues. Now we host regular sporting festivals and other events, such as the parkrun, which attracts 1 200 runners every week.’ In addition, there is a natural goods market, night markets, outdoor cinema events and an arts trail. And for those missing the excitement of Ratanga Junction, there are plans to revive the theme park’s smaller rides in the Ratanga Family Entertainment Centre, which will target four- to 10-year-olds.

Once the Ratanga redevelopment and the Century Village shopping centre are completed, there will still be pockets of undeveloped land available in Century City (some of which is currently used for e-parking). Yet even as the greenfield opportunities come to an end, there will be scope for brownfield developments, says Chapman. Some of the older buildings could already do with a green retrofit or possibly even be rebuilt from scratch.

One thing seems obvious: the decrease in available property stock combined with Century City’s lifestyle offering and central location will ensure that this city within the city will remain a desirable place to live, work and play.