Driving inland from the historic heart of Umhlanga towards the Ridge, one can’t fail to notice the construction boom that is transforming the area. A random count through a car window recently came to six large tower cranes on this short drive. And there are many more constructions sites, with and without cranes, in greater Umhlanga.

The affluent resort town has grown rapidly from the original seaside holiday ‘village’ of Umhlanga Rocks (with its landmark red-and-white lighthouse) to include Umhlanga Ridgeside (a vibrant four-precinct development east of the M41), Umhlanga New Town Centre (the mixed-use ‘live, work, play’ nucleus of the Ridge) and La Lucia Office Park (the more mature office node on the south side of the M41).

No longer a sleepy holiday resort, Umhlanga is one of SA’s hottest locations for property development. Its population has mushroomed by 57% within the 10-year census period, ending in 2011, and big corporates have flocked here – among them Absa, KPMG, Vodacom, Illovo Sugar, Unilever, Discovery, Investec, FNB and Nedbank. Many property developers and specialist consultants involved in developing Umhlanga have also relocated here. For example, Growthpoint and AECOM both occupy Green Star-rated buildings that are certified by the Green Building Council of South Africa (GBCSA). 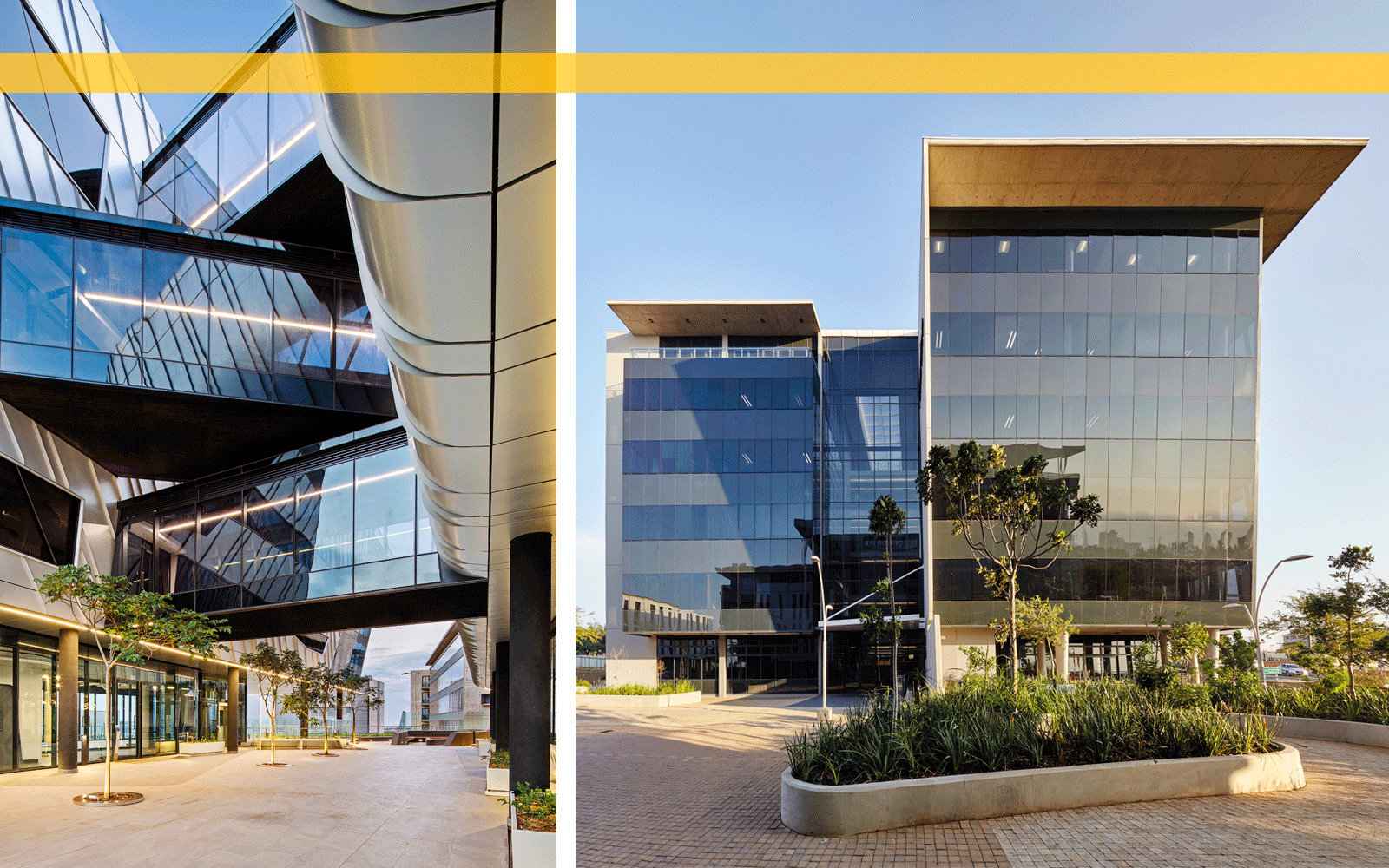 The area’s property market has seen strong growth in prime-grade and A-grade office space as well as in high-end residential property. According to Broll’s latest Office Market Report for Umhlanga and La Lucia, the office parks in the latter area have reached maturity and remained stable without significant development in recent years. ‘By contrast, the enormous amount of development across all categories (office, retail, residential and hotel), in both Umhlanga Ridgeside and New Town Centre as well as neighbouring Cornubia and the Sibaya Precinct to the north, is expected to create opportunities in the form of jobs and economic stimulation,’ states the June 2018 report.

Approximately 87.9% of total stock in Umhlanga and La Lucia is A-grade and many buildings offer sea views and attractive, landscaped gardens, states the report. ‘Many new additional office develop–ments are scheduled to be launched in the next 12 to 24 months. This new space, measuring approximately 100 000 m2, is expected to create numerous quality opportunities for blue-chip tenants for the foreseeable future.’

These trends echo Gauteng’s migration to the north, which saw businesses gradually moving from the Johannesburg city centre to Sandton, creating an entirely new CBD. In KwaZulu-Natal, businesses and residents are moving from the Durban CBD and Westville to the Umhlanga area, which has already turned into a thriving economic hub. 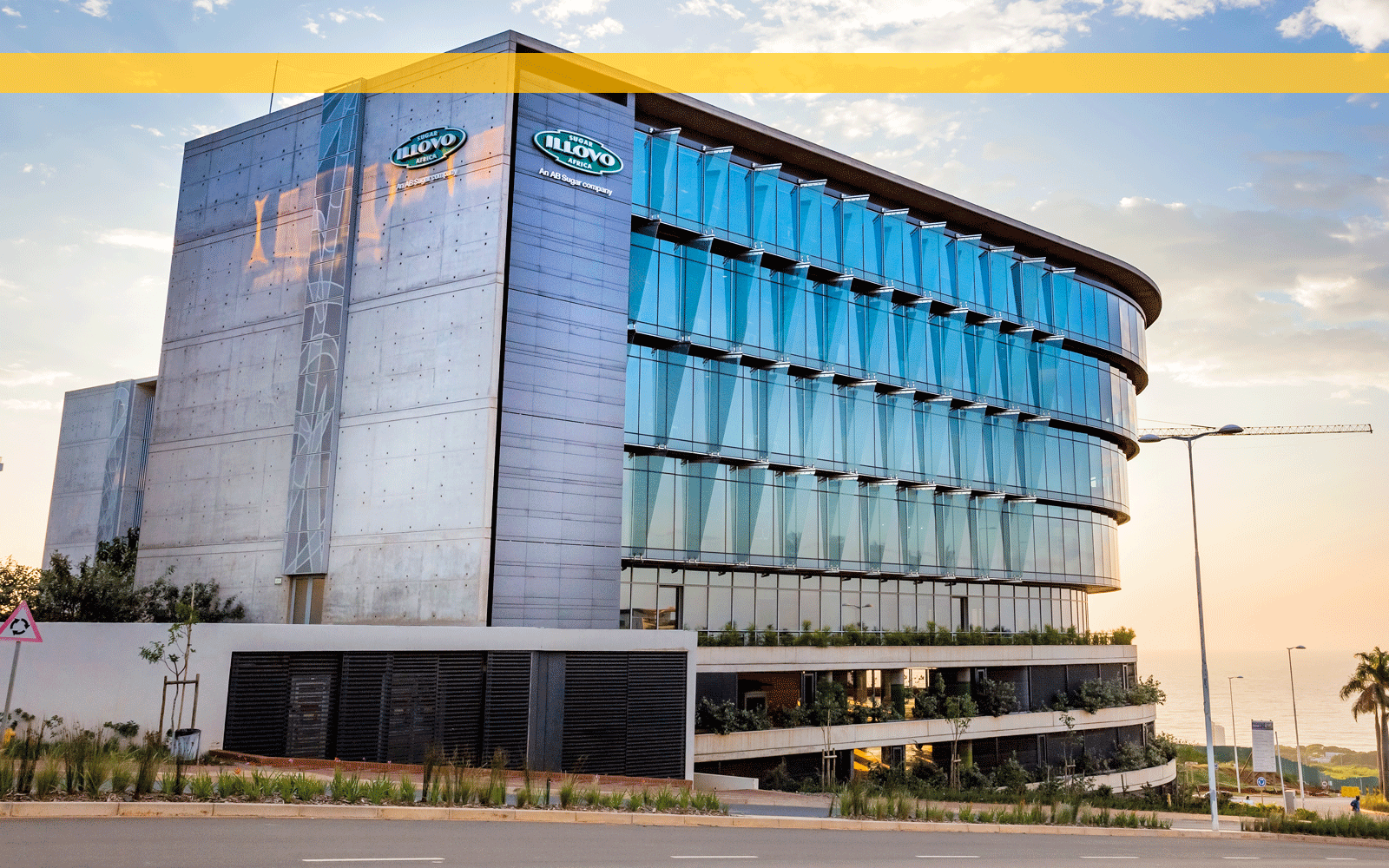 Part of the attraction lies in the proximity to the Durban CBD (less than 20 km away) and King Shaka International Airport at Dube Trade Port (about 17 km from the New Town Centre).

At the same time, the upgraded four-level Mount Edgecombe interchange has also improved the traffic flow and linked Umhlanga to the region’s motorway network.

Another drawcard is the Gateway Theatre of Shopping, one of Africa’s largest malls, which has served the region for the past 17 years. At the time of writing, Gateway was in the final stages of a R750 million expansion and revamp, allowing it to compete with two newcomers: the R1.8 billion Cornubia Mall and the R1.5 billion Ballito Junction Mall (both opened in 2017).

Competition will become even stiffer with the opening of the high-end 33 000 m2 Oceans Mall in 2019 – part of the prestigious R4.2 billion Oceans development in Umhlanga Rocks, which will consist of three towers featuring 460 sea-facing, luxury apartments and the five-star Radisson Blu Hotel.

‘Within the first four hours of the apartments being for sale, R1.55 billion of apartments were sold. This sale is a South African record,’ Oceans Umhlanga developer Vivian Reddy told Independent Online (IOL). The previous one-day advance sales record also took place in Umhlanga Rocks, in April 2015, when R1.2 billion was reserved for apartments in the fifth and final phase of the luxury R3 billion Pearl Sky beachfront development, according to IOL.

‘Investor confidence in Umhlanga Rocks is evident, with new and current developments totalling a conservative R10 billion,’ says Tongaat Hulett, the sugarcane grower and agri-processing firm that has evolved into a leading property developer in the province.

This may sound like ‘Sandton by the Sea’, but it’s not. True, Umhlanga features high-rise office buildings, upmarket apartments and hotels catering for affluent travellers, just like Jozi’s economic powerhouse Sandton. But what sets it apart is its year-round, warm climate and spectacular natural beauty.

The majority of buildings offer panoramic views stretching from the Indian Ocean coastline across verdant hills and valleys to the pristine Hawaan forest – a private, beachfront nature reserve that contains one of the country’s last examples of a primeval dune forest. 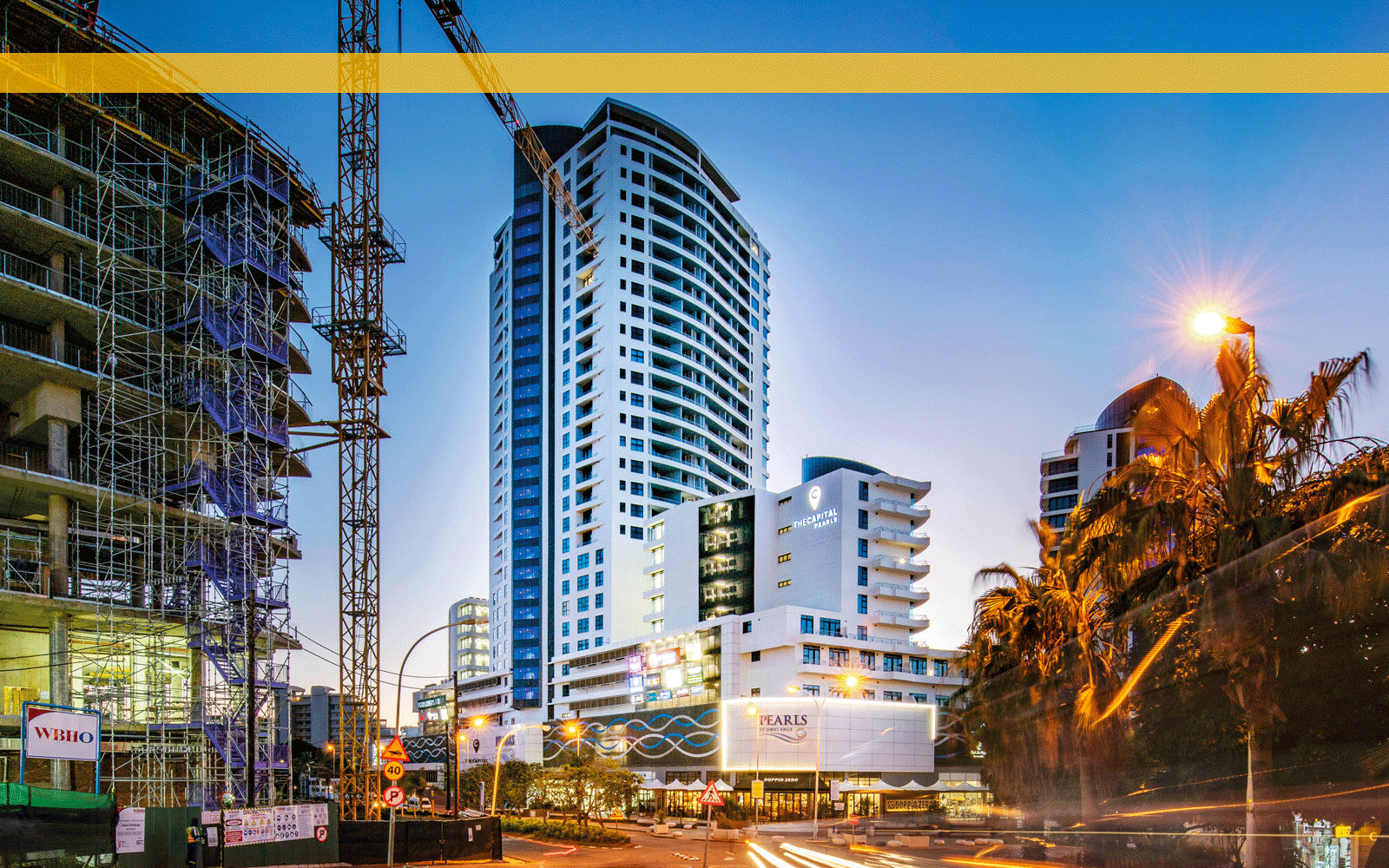 Sunshine, sea and sand make for a more relaxed atmosphere than in landlocked Sandton, with Umhlanga Rocks marketing itself as a place where ‘every day feels like a holiday’. While some local residents lament the fact that their ‘village’ is losing its charm and authentic character, there’s been a concerted effort to embrace the future by the tourist authority as well as business, property owners and other stakeholders. In 2016, a ‘place-branding’ campaign was launched to dust off the nostalgic image in favour of a more modern, energetic vibe that appeals to locals, holiday-makers and working professionals alike.

‘Some of our hotels are seeing four generations of families making memories and establishing traditions,’ says Cara Reilly, head of place-making for the Umhlanga Urban Improvement Precinct (UIP) management company, UrbanMGT. ‘So while concerns are that the village of old is disappearing, the vision is mindful of Umhlanga Rocks’ history while shaping a new village, and a new experience, one with better pedestrian accessibility and connections to green spaces and beaches; a higher-quality retail and dining offering; a raised level of security; cleaning, greening and maintenance through the UIP and municipal structures; and a greater range of activations bringing life to Umhlanga Rocks.’ 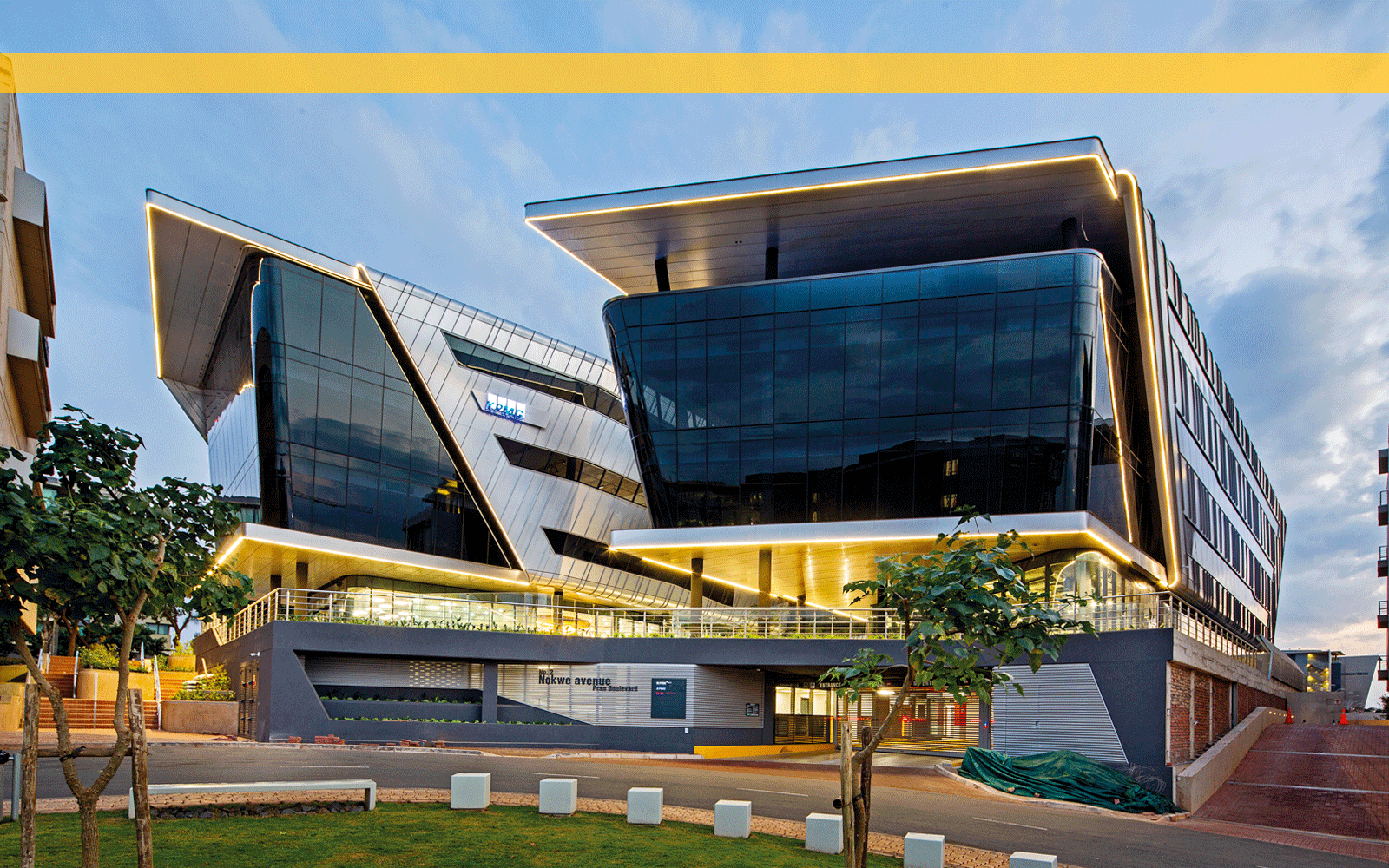 Until recently, the village used to be the region’s go-to place for restaurants, bars, hotels and upmarket apartments, while (according to the Broll report) Ridgeside was ‘purely commercial in nature’. Now the lines have started to blur and there is an array of leisure amenities and shared public spaces in the Ridgeside precinct.

‘Multiple residential developments have since commenced and will house internationally branded hotels, adding to the prestige and convenience of the node as well as embodying the “live, work, play” concept,’ states the report.

Nedbank’s green R1 billion Park Square, due to open in the New Town Centre in November, reflects this concept by promoting a healthy work-life balance. The goal is a 5-star Green Star As Built rating and, for the well-being of bank staff, a 4-star Green Star Interiors rating. 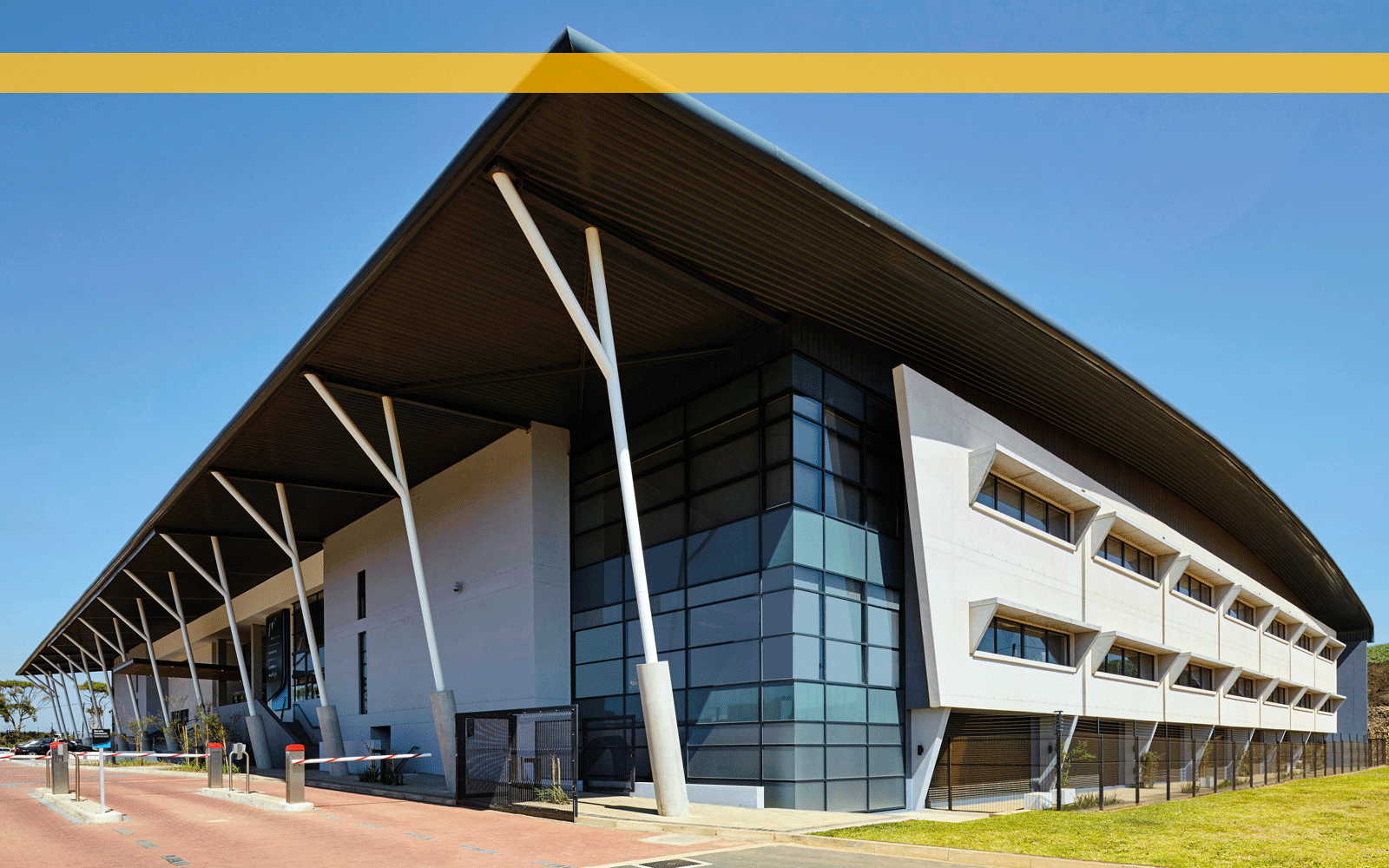 As the name suggests, there’s a park (the adjacent CJ Saunders Park) and a square (the 3 500 m2 Mediterranean-style piazza at the core of the development), which are intended to bring people together in a seamless link between office, retail and public green spaces. ‘This innovative and connected space encourages people to think beyond the boardroom, take time to unplug and to connect with one another,’ says Ken Reynolds, Nedbank Property Finance divisional executive. ‘By similarly drawing the surrounding communities for shopping and relaxing, the overall effect is a sociable, communal space that emphasises a convenient and balanced work-life experience.’

Park Square incorporates 36 000 m2  of lettable commercial space (with Nedbank occupying about 50%) and 4 000 m2 of lettable retail space, with Spar as the anchor client.

The aviation-themed supermarket has an aeroplane cockpit as its reception desk, and a mobile app will be introduced to allow office workers to order and pay for groceries online and pick them up after work.

The development will be easily accessible by the Go! Durban rapid bus service that is currently being rolled out. ‘Adequate facilities for staff and visitors to cycle to Park Square have also been provided,’ says Adhir Imrith, associate at Arup, which provided full multidisciplinary engineering services, including sustainability consulting, for the development.

He explains how the design strives for optimal indoor environmental comfort. ‘Fresh air is being provided at 66% more than standard building regulation requirements. The building and facade design allows for high levels of thermal comfort, natural daylight and access to external views, while also providing glare control.’

Arup conducted various facade studies to optimise glazing performance and compare shading options to suit the local climate. ‘We found that a well-designed building envelope can reduce total energy consumption of the building by up to 40%,’ says Imrith. 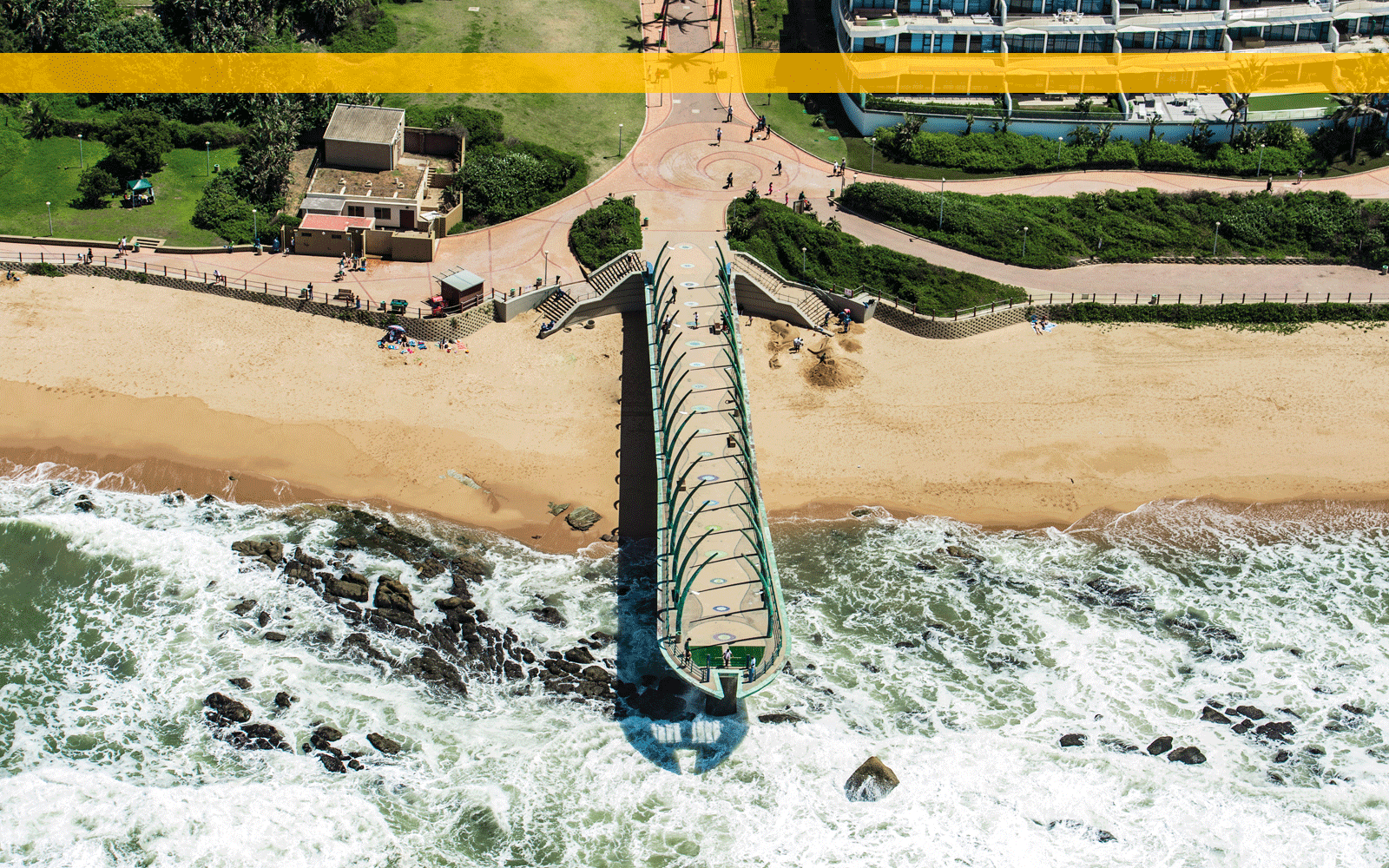 Another key factor that drives energy efficiency – particularly in Umhlanga, where summer temperatures frequently reach 30°C and beyond – is the HVAC system. ‘Chilled water to the system is supplied via a central chilled-water plant with high-efficiency, air-cooled heat-pumps/chillers. The chillers are supplemented with an ice-storage system.

‘The Nedbank call centre area will be heated and cooled via a variable air volume system. This allows airflow to be adjusted in accordance with the occupancy load – established from duct-mounted return-air carbon dioxide sensors – hence reducing the overall fan energy consumption of the system.’

This is yet another testament to Umhlanga’s strong position as a prime property development and investment destination. There’s no slowing down and the magnificent KwaZulu-Natal coastline is about to be transformed some more.