A stable, high-speed fibre-optic line is non-negotiable for motion graphics artist Adriaan Landman when it comes to choosing a suitable co-working space. That, and a dedicated desk to hold his two 27-inch screens and massive computer box, which houses six hard drives and high-end graphics cards. ‘Actually I could work from home,’ he says. ‘But the reason why I prefer to rent a desk in a shared office is that I need to be with the right people. There’s a great sense of community and energy in our co-working space. We feed off each other.’

After eight years with a Durban-based wildlife documentary production firm, Landman decided to go freelance in 2017. He initially shared an office space in an eco-estate in Kloof but has recently moved to Cape Town, where he rents a desk in the bustling Bo-Kaap, working alongside other motion graphics and visual-effects professionals. There are plenty of coffee shops and restaurants nearby, as well as other co-working spaces, such as Inner City Ideas Cartel and Work & Co.

‘It’s easy to move to a different city if you know people in the industry that you gel with and can plug into,’ he says. ‘Our industry is a team effort. The skillset required to produce one animation sequence is so vast that you need to collaborate with others. My agreement with Motif Studios, from which I rent my desk for a monthly fee, is that they give me their work overflow. And at times when I’m frantically busy, I pass on some work, such as modelling or rigging, to someone in the office who specialises in it to free up my time.’

This spirit of collaboration, mutual support and social connection is what attracts people to co-working – which is spelt without a hyphen and defined by Harvard Business Review as ‘membership-based workspaces where diverse groups of freelancers, remote workers and other independent professionals work together in a shared, communal setting’. By choosing to cowork, these professionals can network, bounce ideas off one another and feel less isolated than if they worked at home or rented a conventional office. Many use the opportunity to establish business relationships.

While the spaces themselves can range from purely functional to hipster, old-school charm or living room-style cosy to luxuriously upmarket, their basic services generally include uncapped internet access, security, electricity and water, cleaning as well as the use of shared areas for relaxation and socialising. The add-ons vary dramatically – for some this means barista coffee, free tea and fruit-infused water; for others it’s being able to take their dog along or chilling over table tennis, while there are those who thrive on panoramic vistas or make use of a concierge service, beauty bar and wellness room. 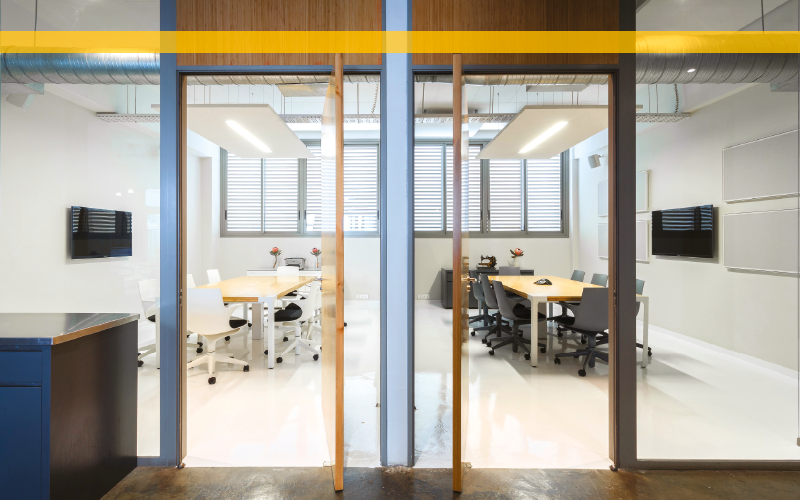 Yet the major selling point is flexibility (you can typically pop in 24/7 to plug in and work; hop between co-working spaces in different locations; and pick your rental option, from hot-desking via a dedicated desk to a private office). And it’s cost efficient, as overheads for co-working are much lower than those for owning or renting a traditional office that is tied into a multi-year bond or lease.

This appeals not only to remote workers and startups but also to established companies and even large multinationals – such as Microsoft, IBM, MasterCard, Oracle and Etihad Airways, which now rent entire offices in co-working spaces for their employees.

‘As companies are cutting back on real estate ownership, they can reduce their operational costs by finding a co-working space that offers all the facilities of an office for much less than an office,’ says Linda Trim, director at FutureSpace, a joint venture between Investec Property and workplace specialist Giant Leap. This means companies can remain flexible, whether they are expanding or downsizing or simply testing the local market.

In SA, the saving for co-working – compared to a traditional office – can range from 30% to 50%, according to FutureSpace. ‘South Africans continue to adopt the massively popular global trend of co-working spaces. Around the world, we see a marked shift in demand for shared offices that are as well designed and sophisticated in service as five-star hotels,’ says Trim, who in April launched a premium co-working space in Bryanston – the third after FutureSpace’s successful Sandton offices at 61 Katherine Street and 96 Rivonia Road.

‘We’re still deciding where to open our next office. There’s definitely a big need, although some areas, for example Sandton and Rosebank, are already overpopulated with co-working spaces,’ she says. 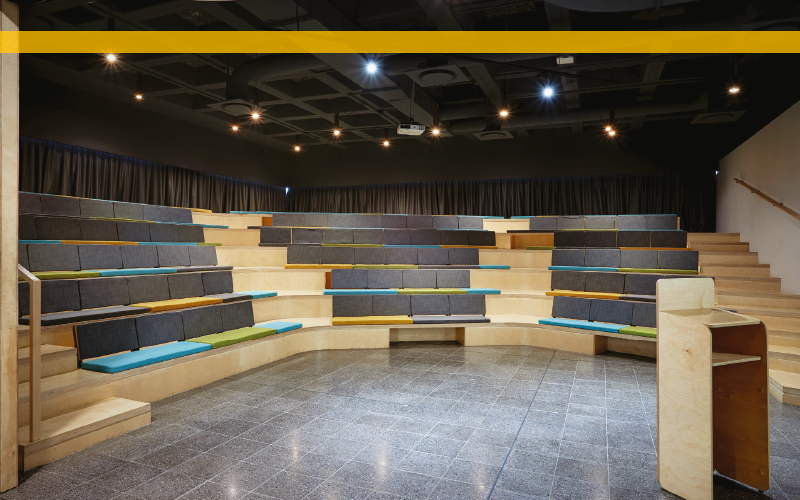 ‘Every five days, a co-working space opens in London and every 7.5 days, one opens in New York City,’ notes the US study. ‘This high frequency of openings shows the massive and strong influence of co-working on major cities, but also on fast-growing tech hubs like Austin and Denver.’ Cape Town is ranked 19th among the top 50 global cities by co-working growth, with 25.9 days between new spaces opening, which is on par with Singapore and Columbus, Ohio. In the country analysis of the highest density of co-working spaces, SA comes 23rd with 0.4 new spaces per year for every 1 million of the population (tied with Germany).

‘As of May 2019, the co-working industry is at an all-time high,’ the study states. ‘With an increasing number of co-working management software and tools rolling out to make workspaces more efficient, the potential of flexible workspaces continues to stretch into the horizon. The overall numbers for 2019 may be more conservative than 2018, but the growth per capita in less populated states and countries shows continued high demand for co-working spaces all over the world.’

The concept was popularised by WeWork, the New York startup founded in 2010 that is now valued at a staggering $47 billion and about to list on the stock exchange. It’s a disrupter in the same league as Uber and Airbnb – the taxi service that doesn’t own cars and the hotel business that doesn’t own real estate. WeWork also doesn’t own the bulk of its properties, preferring to lease. Yet last year it became London’s largest office occupier after the UK government, leasing 240 000 m2 across the city, reports commercial estate agency Cushman & Wakefield.

WeWork intends to be a ‘holistic support system’ rather than simply a flexible office space, describing itself as ‘a place where we’re redefining success measured by personal fulfilment, not just the bottom line’. A growing number of clients are large corporates with 1 000 or more employees. At the latest count, the co-working giant operated 689 office locations in 120 cities across the globe.

One of the new additions is in Rosebank in Johannesburg, which will open later this year and marks the chain’s foray into Africa. The Link, next to the Gautrain station, houses the continent’s first WeWork space on six of its nine floors. The space features ‘art-filled lounges, bright and airy conference rooms, and sleek private offices’ in addition to an on-site wellness room.

According to Reuters, the company’s business strategy in SA differs from its other markets as it’s based on a revenue-sharing lease with its landlord, Redefine Properties. This means adjusting the rent according to the income generated from sub-letting. ‘We’re looking to expand our footprint across Africa, and we’re very excited about the potential here,’ according to WeWork MD Eugen Miropolski. ‘But right now, we’re fully focused on launching in Johannesburg and building our local community.’

Further south, local workplace sharing company the Bureaux has established three very distinct co-working communities in its Cape Town locations. ‘Our electric Woodstock branch [at the Woodstock Exchange] brings you old-school charm with a flair of retro; just enough to get you in that creative mood,’ states the company, which was founded by freelance photographer Greg Beadle, who saw the need for a communal working space where professionals could flourish without paying high overheads.

The explanation continues: ‘With a laid-back surfer-style atmosphere, our Sea Point co-working space is for that special urban/town professional. The worldly Waterclub branch is for that premium executive who needs just a little bit more. This is the professional that wants to impress and likes the nicer things in life.’ 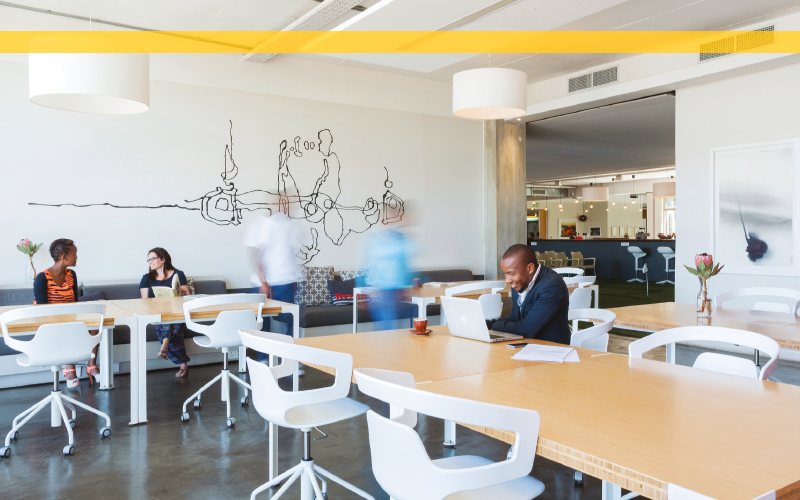 Members can choose from a package that offers access to hot desks and meeting rooms in all three Bureaux locations, to personal desk space and private office suites on a monthly rental. ‘The future looks bright for those businesses that enable members to sign up for not one space but five to 10 different spaces,’ says Paul Keursten, CEO and cofounder of Workshop17, which won ‘Best Co-working Space’ in the 2018 Southern Africa Startup Awards. ‘We have seen the same development in gyms where large players dominate the market and offer members the opportunity to tap into their offering, wherever they are.’

Workshop17 has six workspaces: Maboneng in central Johannesburg, West Street in Sandton and Firestation in Rosebank, and in the Western Cape there is Tabakhuis in Paarl, Watershed at the V&A Waterfront, and 32 Kloof Street, which is due to open in Cape Town in July. The membership plans allow for walk-in day use, monthly memberships and nomadic workers, who need just a couple of hours each month.

Keursten welcomes the emergence of a ‘mini-market trend of integration’ in which co-working spaces offer on-site gym facilities, a crèche for working parents, social spaces such as clubs and events, as well as educational resources and programmes. ‘The concentration of living, learning, working and playing in one area also reduces our time in traffic and, with this, the pollution and traffic jams that are caused by separating life and work in time and space,’ he writes in an opinion piece.

It’s a model that seems to work in SA as co-working spaces thrive, with ever more locations popping up to cater for the changing needs and expectations of our globalising mobile workforce.

Jane Molony, executive director of PAMSA, on how paper and its  by-products are a... END_OF_DOCUMENT_TOKEN_TO_BE_REPLACED