To understand the depths of the continuing water emergency in Southern Africa and other parts of the continent –and the innovative responses to the crisis – you need to go underground. There, beneath the parched topsoil, you’ll start to tap into the reservoirs of groundwater that hold so much hope for thirsty communities and water-dependent industries.

In south-western Tanzania’s Lupa goldfield, for example, Shanta Gold’s New Luika gold mine recently had a skid-mounted borehole-water treatment plant installed as part of a project to source and clarify water extracted both from underground and the Luika river. Meanwhile, in north-western Botswana, 1 500 people in the remote community of Habu – which had gone for years without a reliable water supply – recently celebrated the launch of a water-supply scheme that draws on two boreholes, drilled and installed by JG Afrika, Franklin Wells and the Paul G Allen Family Foundation.

In the Eastern Cape towns of Hankey and Patensie, meanwhile, the local municipality had to find an alternative water solution when the national Department of Water and Sanitation cut the water quota from the Kouga dam to both towns. In May 2019 executive mayor Horatio Hendricks told local reporters that ‘groundwater exploration in and around the towns has finally borne fruit and the municipality will soon start equipping and connecting boreholes to the water-treatment works. Our hope is that the combined yield will be sufficient to stop water rationing’. In 2018 the municipality secured more than R41 million from the Provincial Disaster Relief Fund for groundwater and borehole development in the two towns. ‘Three boreholes were drilled in Patensie,’ said Hendricks. ‘Two boreholes delivered good blow yields of 20 litres per second and 40 litres per second, while the salinity of the water is also at an acceptable level.’

Then, on the lush banks of the Western Cape’s Bot river lagoon, the Arabella Country Estate marked another year of being awarded full ISO 14001 certification, for its international-standard environmental-management system. ‘Over the past 20 years we have taken action to forge long-term sustainable plans regarding water and our immediate environment to ensure sustainability and that we are able to mitigate many future issues,’ says estate manager Dirk Uys. ‘Through the use of established boreholes, a water-purification plant, wastewater treatment for recycling and reuse, as well as stormwater harvesting, the estate is able to ensure sustainable water usage.’ Uys points to a 20-year study showing that the estate had successfully met its water demand using groundwater, with no apparent negative or significant impacts, and despite the region’s recent drought.

A gold mine, a rural community and a golf estate. You couldn’t get three more economically diverse locations. Yet they all have the same eternal challenge: finding the water they need to survive. Increasingly, businesses and communities across the region are turning to boreholes to help them meet that challenge. 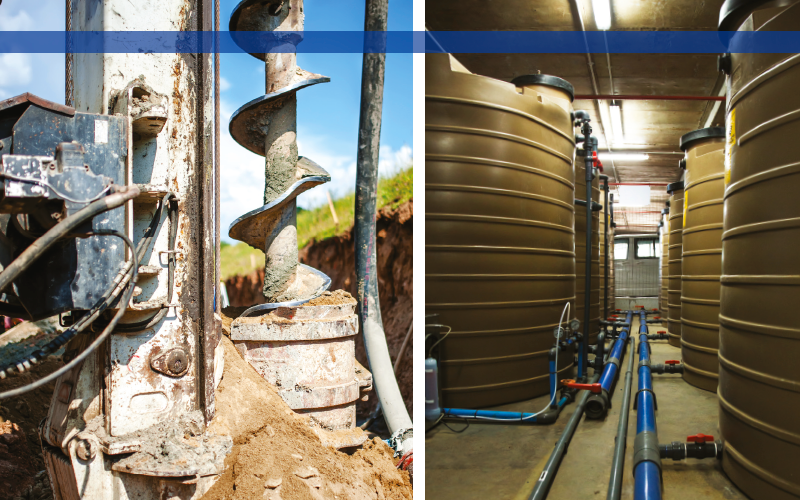 Remaining in the area around Arabella, in December 2018 the Western Cape’s Overstrand municipality awarded Veolia Water Technologies South Africa a long-term contract to operate and maintain its bulk-water services infrastructure. The 15-year contract, said to be the largest of its kind in SA in terms of equipment and number of facilities, covers five surface-water sources, one river abstraction plant, 17 boreholes and three springs. That’s a fairly extensive operation, and the recent expansion of the municipality’s bulk water and wastewater infrastructure comes in response to a rapidly growing local population.

The trouble with groundwater – and with the boreholes that tap into it – is that it’s out of sight, and as a result it’s also often out of mind. ‘Groundwater has often been seen as the underground resource that never runs out,’ Nelson Mandela University geohydrologist Gaathier Mahed writes in a recent piece on the Conversation (later republished by the WEF), warning that, as a result, ‘wells and boreholes are indiscriminately sunk and […] groundwater is abused by the public and even by governments. This is exacerbated in times of drought and even more pronounced in arid areas’.

The Western Cape’s Day Zero water crisis provided ample evidence of this, with local residents being called out for reselling their private borehole water, or using it to fill their swimming pools. As the City of Cape Town says: ‘Water from private boreholes is not meant for sale and […] commercial and industrial entities must still seek the necessary authorisation from the department to sell surface and groundwater. ‘Businesses that are selling groundwater and/or surface water must declare the source and display proof of authorisation from the National Department of Water and Sanitation on any vehicle/transportation mode and retail outlet dispensing such water.’

Yet that only emphasises Mahed’s ‘out of sight, out of mind’ warning. As more and more businesses (and in more and more remote areas) drill and manage their own boreholes, it’s becoming increasingly difficult to monitor how much groundwater is being used. And, as Mahed points out, that supply will, also, eventually run out – and when it does, it can contribute to land subsidence (loss of surface elevation), which can cause surface areas to sink. Land subsidence due to over-extraction of groundwater has become a significant problem in cities such as Jakarta and Mexico City, while in Uganda, where about 60% of water comes from groundwater sources, thousands of boreholes (mostly sunk using aid money or public funds) have run dry.

One way of topping up the groundwater supply – thereby making borehole water more sustainable – is managed aquifer recharge, where groundwater is fed back into the aquifer and ‘banked’ for later use. The primary aquifer at Atlantis on SA’s West Coast has been artificially recharged like this for more than 40 years, and continues to produce about 4 million m3 of water a year.

However, while it works in Atlantis, this method may not have the same success elsewhere. ‘The process isn’t a magic bullet,’ says Mahed. ‘It does have some issues. One of the major problems is that wells could get clogged up by organisms that grow due to the large amount of oxygen that accompanies water injection. But this can be solved by using heated water or chemical injections to kill off the microbes. For projects to be successful there also needs to be a reliable source of water, good engineering expertise and proper environ-mental and legal regulations. There also needs to be proper assessment on whether an aquifer can just be better managed – a simple, yet effective, solution that can cut costs and increase the longevity of an aquifer rather than implementing a managed aquifer recharge scheme.’

In the meantime, carefully managed use of groundwater – accessed via boreholes – is providing businesses with a relatively sustainable supply of much-needed water. SAB, for example, saw its Newlands Brewery being awarded a 5-star water grading by the City of Cape Town in November 2018, in recognition of its integrated water management system.

The brewery reduced its water use from 3.73 hl (hectolitres) to 2.8 hl for every hectolitre of beer produced, sourcing its brewing water from the Newlands spring and from borehole water – in the process freeing up about 1.7 billion additional litres of water a year to the City. Coca-Cola Beverages Africa recorded similar success after shifting some of its supply to borehole water, reporting savings of about 726 million litres of water (equivalent to 290 Olympic-sized swimming pools), in SA between 2011 and 2018. The company reported a 50% reduction in its water use over the preceding 11 years, and claimed to have reduced the volumes of water needed to make 1 litre of beverage from 2.7 litres of water in 2004 to 1.98 litres in 2018. About 40% of its water is now drawn from boreholes. 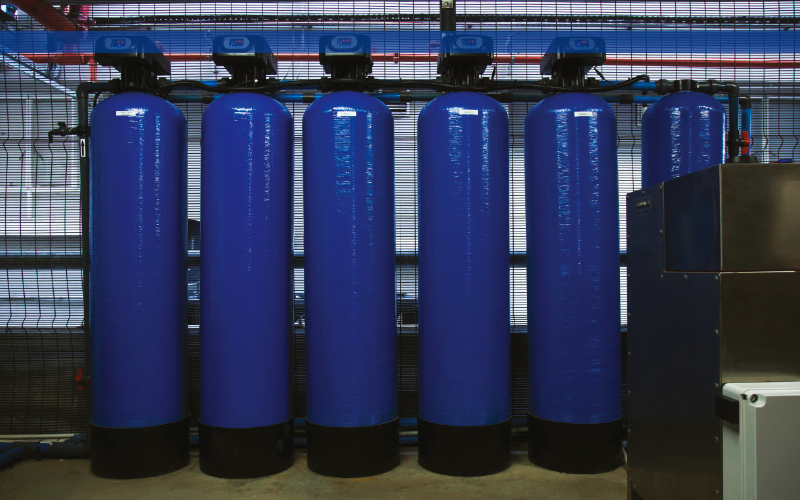 That’s a significant figure, especially when seen against the backdrop of a recent World Resources report, which found that nearly half the population in 15 major cities in the global south lack access to public piped-water systems. The worst cases were found in sub-Saharan Africa and South Asia. In response, Johannesburg Water (the City of Johannesburg’s water and sanitation service) recently partnered with the Borehole Water Association to encourage residents to switch to borehole water. ‘We’re a water-scarce country and everyone has a responsibility to save this scarce resource,’ councillor Matshidiso Mfikoe, member of the mayoral committee for environment and infrastructure services, said at the launch. ‘Boreholes are a component of the water mix the City is exploring. This includes harvesting ground- and rainwater, and recycling [it]. We’re looking at innovative ways to save water. So we encourage you to work with us. Check if you can drill a borehole on your property.’

In SA, a borehole can cost between R50 000 and R100 000 to drill, depending on the depth and the ground conditions. However in 2016, Lungile Dhlamini, then Johannesburg Water MD, said that there were already 13 500 boreholes in the city, adding that parks, golf clubs, schools, churches and office parks were among those that should consider sinking boreholes.

Since then, many more boreholes have been sunk across SA, and the broader region. The question now becomes less about whether boreholes are a viable alternative to municipal water, and more about what can be done to ensure they start to contribute – in a serious, long-term, out-of-sight way – to the mitigation of the water crisis.

Jane Molony, executive director of PAMSA, on how paper and its  by-products are a... END_OF_DOCUMENT_TOKEN_TO_BE_REPLACED