It was a 40-word paragraph in the middle of a 7 400-word speech, but it got people talking. In his 2020 State of the Nation Address, President Cyril Ramaphosa announced that ‘this year we will open up and regulate the commercial use of hemp products, providing opportunities for small-scale farmers, and formulate policy on the use of cannabis products for medicinal purposes, to build this industry in line with global trends’.

This came after the Constitutional Court’s 2018 ruling that SA’s existing cannabis laws were unconstitutional and at a time in which the discussions around cannabidiol oils and medical marijuana are becoming increasingly widespread and increasingly serious.

For entrepreneurs such as Joanne Hope, the cannabis conversation is long overdue. Hope is the founder of KushKush, a female-centric lifestyle store that sells premium cannabis-related products. Hope – like many others in the industry – has been battling the stigma around cannabis for years.

‘We sell only legal accessories and hemp-based products on our website,’ she says. ‘I don’t believe in exploiting grey areas of the law. As a mom, I don’t want my children to be ashamed of what I do. The legalisation of cannabis was the first – very important – step, but now we’re working towards normalisation so that people can access information, join the community and have a premium retail experience, without the fear of being stigmatised for it.’

That stigma lingers around the cannabis industry like a smelly cloud. Decades of prohibition, combined with giggly jokes about dagga smokers, have kept the industry largely in those legal grey areas that Hope mentioned. So when Tony Budden talks about his hemp business and his green home (‘green home’?) built out of hemp-based materials, it can be difficult to see beyond one’s own prejudices. If you’re stuck on the idea of a dreadlocked rasta living in a house made out of weed, you’re unlikely to pay much attention to the significant difference between marijuana (which contains tetrahydrocannabinol – THC,which is the stuff that makes you high) and hemp (which contains hardly any THC and, perhaps disappointingly, won’t get you high). 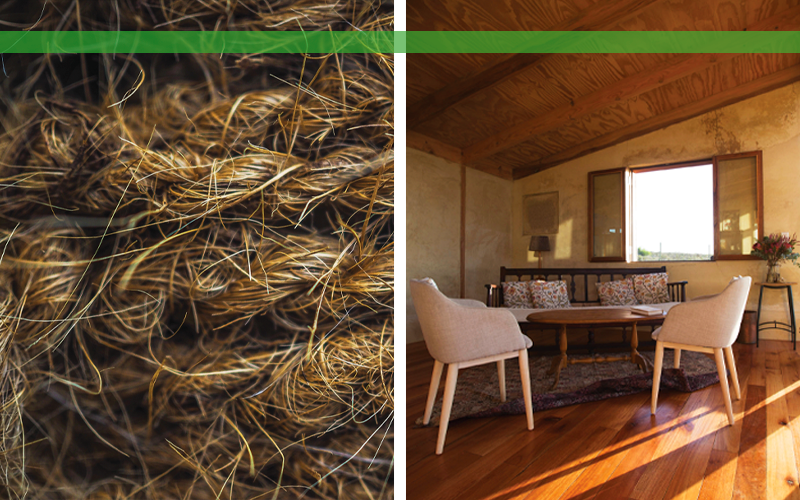 Budden is a normal guy. The founder of hemp-based product store Hemporium, he has lived in SA’s first hemp house since it was built in Noordhoek, in Cape Town’s south peninsula in 2011. His furnishings are made of hemp, his shirt is made of hemp, the soap in his bathroom is made of hemp… And that’s the point. Hemp, he argues, is an eco-friendly and versatile plant, with hundreds of consumer-product applications.

The construction industry is starting to catch onto that. A new report by Grand View Research sees the market size for industrial hemp (the soft fibre from the Cannabis sativa plant) reaching $15.26 billion by 2027, at a revenue-based CAGR of 15.8% over the forecast period.

‘Growing preference for eco-friendly products in thermal insulation, coupled with the rising use of the product as fibreglass alternative is expected to drive the growth,’ the report claims. Rising consumer preference for green buildings owing to increasing environment pollution is expected to drive the demand for hemp-based construction materials in the forthcoming years.

‘In addition, rising consumption of hempcretes – a concrete made from shives and lime – in Europe is expected to further propel the demand for industrial hemp over the forecast period.’

Hemp’s green-building credentials come in part from its high levels of carbon sequestration. As natural-building company UK Hempcrete points out in an online post, ‘hemp shiv (the stalk of the hemp plant, used in hempcrete) sequesters a very high level of atmospheric carbon. This is due to the fact that it is a tall, spindly plant that has most of its branches and leaves at the top – to support this weight it needs to absorb lots of carbon from the air to create a very hard, tough stalk; a cellulose material very similar to timber’.

Meanwhile, a report released by Good Earth Resources claims that ‘industrial hemp has been scientifically proven to absorb more CO2 per hectare than any forest or commercial crop, and is therefore the ideal carbon sink’.

UK Hempcrete quotes studies suggesting that ‘even after accounting for all the CO2 emitted during growing, harvesting, transport and construction, a hempcrete wall still stores between 110 kg (sprayed hempcrete) to 160 kg (hand-placed hempcrete) of CO2 net per m3 of hempcrete material. Developed countries are currently spending a fortune building complicated machines to capture carbon from power stations and factories, and then burying it deep underground. Every hempcrete building is achieving carbon capture and storage without even trying, as a side-effect of the construction process’.

Hemp also grows very quickly. According to SA’s Agricultural Research Council, it is ready for harvest within 120 days of planting – which makes it a highly renewable plant. The costs, too, are competitive. A DIY hempcrete kit costs R275 at Hemporium, while a 15 kg bale of hemp hurd (chips of the hemp stalk used for making hempcrete) costs about R300.

Don’t expect a concrete-like consistency  if you work with hempcrete, though. As Budden explains, ‘the lime slurry goes into the mixer, and then we shovel some of the hemp in until you  get what’s called a “Weetbix” consistency. It’s  not wet. It’s not like you’re casting cement. You can pick up a ball of hempcrete and it won’t run through your fingers’. It is, in other words, a natural, plant-based product.

‘The time frame for construction of a hempcrete building depends of course on the size of the building, but it can go quite fast once the wooden frame is up,’ says Budden. ‘You must make sure the hempcrete is properly dry before plastering though. Builders who work with it generally say that to build 1 m3 of hemp wall with an integrated timber structure will cost approximately R4 494, or R1 337 per m2 of wall facade (300 mm thick). This cost includes the hemp, lime, cement, timber structure and labour to erect the timber structure and the hempcrete. It excludes formwork, plastering, painting, buckets, spades, masks, etc.’

UK Hempcrete, meanwhile, claims that in retro-fit construction, natural, breathable insulations  are an essential part of repairing and upgrading the building effectively and safely. ‘They work in the same way as the original materials used in the building, ensuring that the vapour permeability of the fabric is maintained,’ the company states. ‘The mistaken use of synthetic, non-vapour-permeable insulation materials in such buildings effectively seals up the building, causing damp, unhealthy indoor environments and cold, wet walls.’

According to UK Hempcrete, new-build projects using raw materials such as hemp shiv and straw should cost about the same as conventional construction methods. ‘However, some of the more processed natural insulation materials (for example sheep’s wool, wood fibre or hemp fibre insulations) do currently cost more than synthetic equivalents,’ they add. ‘This is mainly because at  the moment fewer people are using them, though this number is increasing all the time.’

Setting aside the medicinal aspect of cannabis products, when one considers that background  of rising interest and growing market forecasts,  it’s no surprise to hear Ramaphosa expressing government’s interest in the hemp industry. Zimbabwe announced in mid-2019 that it would change its laws to allow farmers to grow industrial hemp for export, adding that the government saw the plant as a future substitute for tobacco, the country’s biggest export-earning crop. 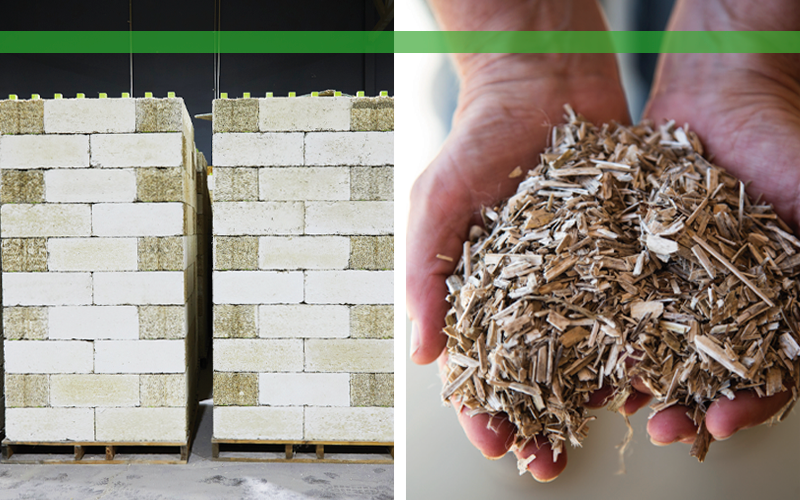 Zimbabwe’s existing laws allow cultivation of cannabis for medicinal and scientific uses only,  but recent legislation allows Zimbabweans to apply for licences to grow industrial hemp for export.

‘With hemp, it’s not [as] toxic as cannabis,’ Zimbabwe’s acting Minister of Industry and Commerce July Moyo told the media. ‘The Minister of Justice has been directed to say  “go and make amendments” to the criminal  code in our system so that people who will grow hemp don’t have to be criminalised.’

But SA’s biggest competition in terms of hemp exports might not come from Zimbabwe. Small, sleepy Lesotho has rapidly emerged as the region’s cannabis greenhouse. Halo Labs, which is listed on Toronto’s NEO Exchange, recently agreed to buy Lesotho-based medicinal cannabis producer Bophelo Bioscience & Wellness for about $18.4 million, with a company statement noting that Lesotho ‘is making strides toward becoming the worldwide export hub for cannabis’.

The transaction is expected to ‘strengthen the company’s position in Lesotho, a country quickly becoming the continent’s export gateway to the global cannabis market’.

Meanwhile, Labat Africa, the first cannabis company to be listed on the JSE, recently bought a 70% interest in cannabis business CannAfrica for R15 million. The investment group – which was awarded a trading licence in Lesotho in 2019 – also announced its aim to establish itself as a fully integrated cannabis business.

In the midst of all of this, Rolling Stone magazine – beloved of music fans and stoners around the world – reported from the Cannabis House at January’s 2020 World Economic Forum in Davos, Switzerland. After quoting an Israeli cannabis entrepreneur calling Lesotho ‘the cannabis kingdom’, the reporter reflected on ‘how poor Lesotho, population 2 million, was set to lap America’s hemp possibilities all because of a long-ago stigma’. It’s something the global construction industry might take note of.

Jane Molony, executive director of PAMSA, on how paper and its  by-products are a... END_OF_DOCUMENT_TOKEN_TO_BE_REPLACED