Water, water everywhere,’ cries the Ancient Mariner of Coleridge’s famous poem, only to lament, floating in the middle of the ocean on his makeshift raft, ‘nor any drop to drink’.

Thirsty businesses, municipalities and residents along the parched SA coastline would have been forgiven for thinking much the same during the recent droughts: despite the ocean on their doorstep, there was no water to drink. The reason, of course, is that ocean water is saline, and you need fresh, potable water for drinking, washing and irrigation. While removing the salt from the seawater seems the obvious solution, for reasons that remain hard to swallow, SA’s sustainable desalination projects have for many years proven to be expensive, impractical or unworkable. That’s changing, however.

In May 2017 the Department of Water and Sanitation launched the critical 10-megalitre-per-day Richards Bay desalination plant, in the hope of enhancing the water supply within KwaZulu-Natal’s King Cetshwayo District Municipality. It was less a case of experimenting with innovation and more a case of desperation: in August 2016 the regional drought had driven water levels at Goedertrouw dam, the main supply to Richards Bay, to dangerously low levels of 16%.

Speaking at the opening of the plant, then-Minister of Water and Sanitation Nomvula Mokonyane said: ‘There is a dire need for co-ordination of infrastructure investments in targeted spaces across spheres, sectors and with stakeholders – and governments across the various spheres should strive to overcome persistent backlogs and inequities in service delivery through improved intergovernmental planning and budgeting processes.’ Barely a year later, the Western Cape government followed that advice, setting up temporary desalination plants in Monwabisi, Strandfontein and the V&A Waterfront, with the water from those plants being injected into the local reticulation systems. 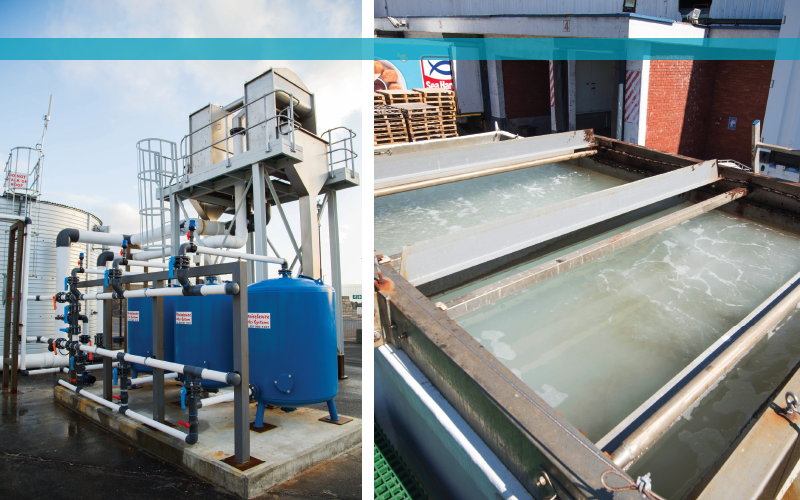 The temporary plant at Strandfontein came online in May 2018, pumping 7 megalitres a day into the City of Cape Town’s water supply. The diesel-powered plant’s R240 million contract is only for water supply for 24 months, after which the equipment (which is owned by the contractor) is set to be removed and the area rehabilitated.

Inevitably – given the Mother City’s knack for creating comedy out of crisis – Cape Town Deputy Mayor Ian Neilson toured the Strandfontein facility’s opening day in the middle of a torrential winter rain shower. As the rain pelted down, Neilson took a sip of the desalinated water and noted (as lab tests had already confirmed) that it was safe to drink and tasted no different to bottled or tap water.

That water reached his glass through a complex process. Pipes stretch out into the sea, sucking about 15 megalitres of saltwater into large containers in the plant, where the water is separated into brine and clean water through a process of reverse osmosis. The water is piped into the City’s water supply, while the brine is dumped back in the sea.

The last part of the process is why environmental experts are – to put it mildly – not entirely sold on the idea of desalination as a viable alternative water source. In a 2017 report by Anchor Environmental Consultants, the authors warn that ‘discharge of brine into the surf zone will likely result in limited offshore dispersion and potentially inadequate dilution of brine’. They further caution that salinity changes can cause changes to water column structure and to water chemistry, pointing to studies indicating that brine discharges have led to reductions in fish populations, die-offs of coral and plankton in the Red Sea, and mortalities in mangrove and marine angiosperms in the UAE. Israel and the Arabian Gulf are, it’s worth noting, often cited as success stories when it comes to desalination projects.

The WEF, meanwhile, warns that ‘our thirst for more water is making the ocean saltier’, citing a New Scientist interview in which researcher Amy Childress describes increasing salinity as one of the most important environmental issues of the 21st century. ‘Most desalination plants pump salty leftover water back into the ocean,’ says the WEF. ‘But researchers like Childress are concerned that it could hurt salinity-sensitive organisms, like the red abalone or the giant kelp that provide homes for a diverse range of marine species.’

Added to that is the cost of desalination. In 2012 the WSD’s National Water Research Commission described plans to remove salt from SA’s seawater to make it drinkable as ‘a last resort’, primarily because of the amount of electricity used in the desalination process, the cost of the technology and the significant increase in the price at which the water would have to be sold.

The high costs of desalination are primarily a function of scale, water salinity quality and temperature, marine works requirements, network integration costs and procurement methodologies, according to the City of Cape Town’s Water Outlook 2018 report. The annual report’s 26th revision, released in late July 2018, highlights the differences between the four main water sources. ‘Surface water is least costly but not resilient to drought; groundwater can provide relatively quick additional water into the system [and] extraction can also be matched to requirement; permanent desalination is very costly and cannot be implemented quickly, but it is the only unlimited new source of water into the system completely independent of rainfall; re-used water is less costly than desalination, and is necessary to maximis[ing] value from the diversified supply mix, which is considerably more expensive than single-source surface water.’

The report reiterates that ‘the quantity of water available from the sea is constrained only by the high cost that would be incurred in desalination’, and notes that ‘of the three “new sources” of water – groundwater, wastewater reuse and seawater desalination – only desalination is totally independent of rainfall’. That last point would not have been lost on Neilson, despite his waterlogged visit to Strandfontein Pavilion.

The cost factor makes the recently opened plant at Witsand all the more appealing. The Hessequa Municipality recently opened the 72.3 kWh solar-operated reverse osmosis desalination plant about 6 km upstream from the Breede river mouth, in a R8.6 million project co-funded by the Western Cape government (through the drought relief fund) and by the French Treasury (through a fund dedicated to the implementation of innovative green technologies). The plant will produce 100 kilolitres of fresh water per day powered by the sun’s energy, with the aim of addressing the local water requirement. That capacity would increase to 300 kilolitres during the peak December holiday period by connecting to the local electricity grid.

‘The shortage of water in the Western Cape is a harsh reality,’ says Hessequa executive mayor Grant Riddles. ‘By implementing preventative measures, Hessequa Municipality will be able to create water resource stability in our region. The municipality is utilising innovative ideas in combating the effects of climate change, by taking the frontrunner approach in establishing public-private intergovernmental relationships and joint ventures. These partnerships will ensure a green economy that aims at reducing environmental risks and ecological scarcities.’ 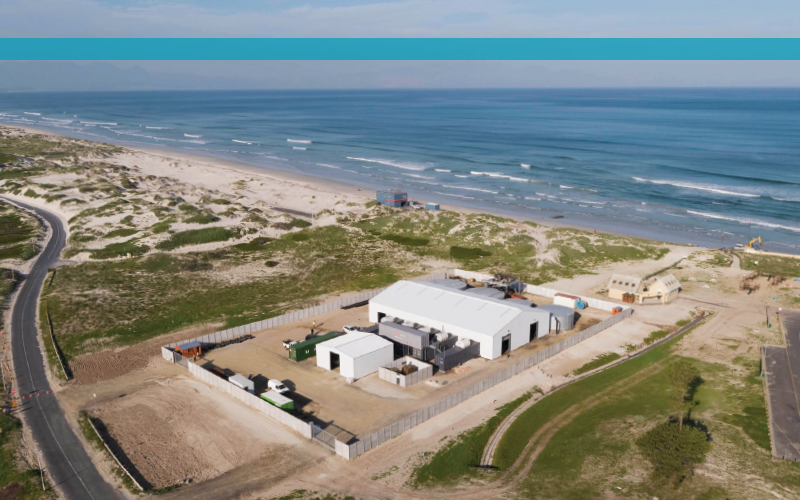 Crucially, the Witsand plant will produce water at an estimated cost of only R7 to R8 per kilolitre. That’s slightly more than the R5 per kilolitre cost of water from the City of Cape Town’s storage dams, but significantly less than the cost of water from the temporary desalination plant at Strandfontein, which is estimated at up to R40 per kilolitre. Witsand’s purified water costs less than Strandfontein’s for two reasons: Witsand operates mainly on free solar power (with no batteries), while Strandfontein runs on diesel fuel; and Strandfontein is a temporary, two-year solution, whereas economies of scale make Witsand’s water relatively cheaper to produce.

Desalination, then, works best as a long-term solution (environmental concerns notwithstanding), which is why, when listed seafood company Sea Harvest opened its desalination plant in March 2018, its view was on the future. The company’s operations director Terence Brown said at the launch that the plant would have the capacity to supply Sea Harvest’s Saldanha Bay factory with all the water it needs. ‘The most important deliverable of the plant is 1.15 megalitres of potable water per day,’ he said. ‘This will ensure that there is no disruption within our business should we reach “day zero”. In this way we can remain sustainable and profitable but most importantly protect jobs.

‘Sea Harvest is the single largest employer within the Saldanha Bay Municipality. Anything that negatively affects our ability to operate will have dire consequences on the communities in and around which we operate. As a responsible corporate citizen, we have to do our best to prevent this from happening.’