For centuries bamboo has been used as a structural material, and today it’s still used as scaffolding and for housing, mostly in Asia, Africa and South America. However, in 2018, following floods and landslides in central Kenya that left about 100 people dead and nearly 300 000 displaced, bamboo became very useful as a soil stabiliser for smallholder farmers along the Upper Tana river basin. It was the perfect plant for the job, given the urgent rebuilding need. Part of the grass family, it grows faster than many hardwoods, at an unbelievable rate of up to one metre per day.

‘Bamboo is attractive to rehabilitate areas that are deforested,’ Catherine Muthuri, a research scientist at the World Agroforestry Centre in Nairobi, told Deutsche Welle. ‘We have a wide range of species, adaptable to every place, but it’s not a one-fit situation. They take time to establish, but once established they take very little time to grow.’

That fast-growing ability also means bamboo is ideal for absorbing greenhouse gases, which makes it a potent weapon in the continental fight against climate change. But while Muthuri emphasises bamboo’s value as a buffer and water filter on rural riverbanks, she warns that – in Kenya as much as in SA or anywhere else in Africa – ‘it’s not an attractive species for the farmlands unless [there is an] economic incentive for the farmers’.

That economic incentive is growing quickly. In April 2019 Rwanda’s Ministry of Environment concluded an agreement with Chinese bamboo promotion agency China Bamboo Aid Project that aims to promote the use of Rwandan-grown bamboo for various purposes. ‘We have about five large species of bamboo, some of which are edible as vegetables when they are still young and can also be transformed into other food products with technology used in China. The others are for the production of roof tiles, wrapping paper and toilet paper,’ according to Rwandan Water and Forestry Authority spokesperson Augustin Mihigo.

Just three months later the Republic of the Congo joined the International Network for Bamboo and Rattan (INBAR), with the country’s ambassador to China, Daniel Owassa, noting that ‘in my country, bamboo and rattan are a common sight, and a large part of local culture’, and adding that he hoped membership of INBAR would ‘help us to further integrate bamboo and rattan into our policies, programmes and partnerships, in areas such as poverty alleviation, environmental protection, and climate change mitigation and adaptation’.

While SA is not a member of INBAR, it does have bamboo plantations in the Eastern Cape and KwaZulu-Natal, where the soil, climate and rainfall conditions are most conducive to commercial growing. In 2017, a team from the Human Sciences Research Council (HSRC) compiled what the authors called ‘a first attempt to assess the local bamboo industry and identify the most important opportunities and challenges of commercial bamboo growing in South Africa’. 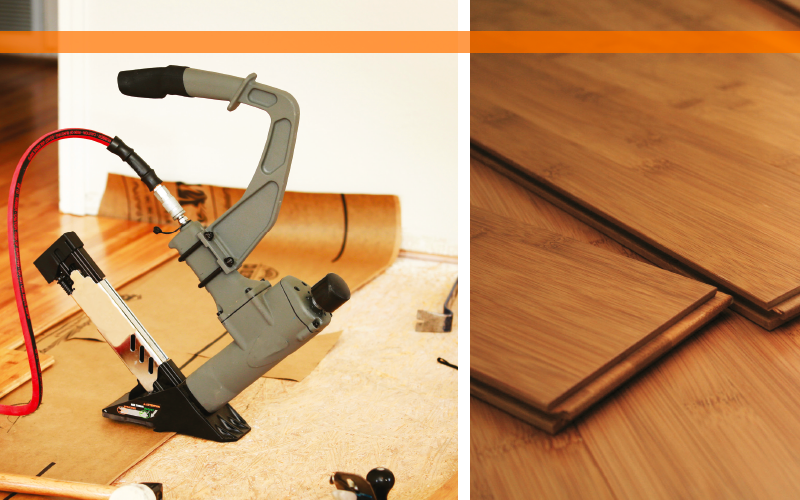 They found that the bamboo industry in SA is ‘small, but it has all the necessary stakeholders including nursery/tissue culture, retailers, government, consultants and commercial growers’. Crucially, though, the report – co-authored by Andreas Scheba and Setsoheng Mayeki of the HSRC, and Ryan Blanchard of the CSIR and the Centre for Invasion Biology at Stellenbosch University – found that because bamboo is relatively new in SA, there is much uncertainty over market demand for local bamboo products, and there are no appropriate insurance instruments for growers against unanticipated losses. ‘Financial institutions are reluctant to invest because of the perceived risks and uncertainty,’ the report adds. ‘Bamboo growers face technical challenges, including problems with the establishment of infrastructure, nurseries, planting, growing and maintenance, harvesting and processing. Often, these challenges resulted in unforeseen expenses.

‘There are also many policy and regulatory uncertainties. For example, it was not clear whether national government regards bamboo as a grass or a tree, which, among other factors, hampered the development of an enabling regulatory framework.’

Finally, the report notes that more than 2 000 products can be made from bamboo using low-and high-skilled manufacturing, and bamboo products can be used in industries as diverse as bioenergy, construction, textiles, furniture, flooring, aircraft, medicine and mining.

China, of course, is well established as a global leader in bamboo. There, says INBAR director-general Hans Friederich in an Inter Press Service interview, 8 million to 10 million people make a living out of it. ‘They grow bamboo, manufacture things out of [it] and sell bamboo poles,’ he said. ‘That has given them a livelihood and a way to build a local economy to create a future for themselves and their children.’

Friederich points to recorded statistics claiming that Africa has about 3.5 million ha of bamboo, excluding conservation areas. ‘So, if I were to make a guess, Africa has as much bamboo as China [excluding China’s natural forests] and that means theoretically, we should have the possibility of creating an industry as large as China’s in Africa,’ he says. ‘That means an industry of $30 billion per a year employing 10 million people.’ He cautions, however, that while it’s still new in Africa, China has had 30 to 40 years to develop its local industry.

Still, bamboo is attracting increased attention in SA, with proponents pointing to its potential for commercial production and local industrialisation without degrading the environment. As the HSRC paper explains: ‘Bamboo is promoted as a renewable resource that can substitute many wood and fibre-based commodities, provide green energy and become an integral part of climate change mitigation, adaptation and soil restoration strategies. Its commercialisation is seen to offer great potential to contribute to poverty alleviation, local industrialisation and sustainable development on the continent.’

There are, however, legitimate questions about its broader suitability as a construction material. While it has the strength of hardwood, bamboo has relatively limited natural durability – and to become commercially competitive it would need to be transformed into an engineered product.

Speaking recently to the global professional body the Royal Institution of Chartered Surveyors (RICS), Dirk Hebel of the Karlsruhe Institute of Technology in Germany said: ‘The question of resources is, next to the question of energy, the most important one of our time. We need to shift from a mining ideology to a kind of cultivating ideology – cultivating in the sense that we are moving towards the idea of growing our own construction materials.’ 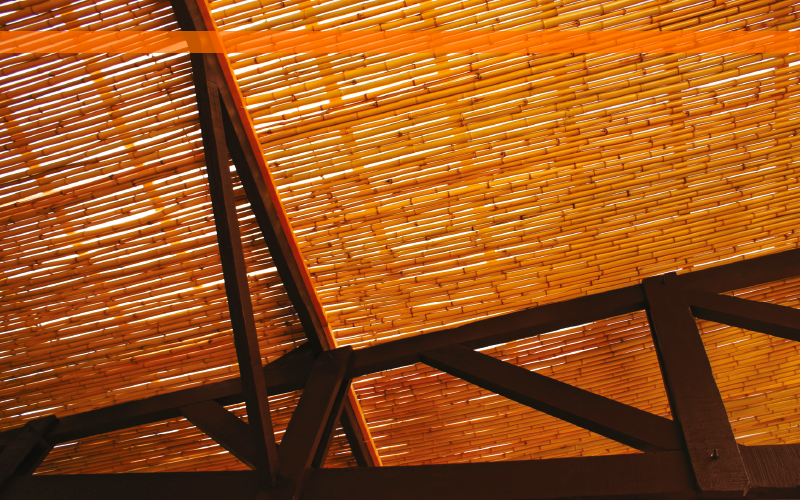 He emphasised bamboo’s natural capacity to take high-tensile force, saying: ‘Steel, used as a reinforcement, is mainly placed into concrete to take care of tensile forces, so it was a logical step to ask, “Can we make a material out of bamboo that could replace steel as a reinforcement element in concrete?”.’

Hebel and his researchers appear to have answered that, developing a composite that combines bamboo fibres with a resin that allows the material to be heat-compressed into various shapes, while preventing it from degrading. The fibre is extracted from several bamboo stems (sourced mostly from species found in Ethiopia and Indonesia), and combined to create a consistent average strength across the product. ‘We are just at the start of this research,’ Hebel told the RICS. ‘This is a natural material, and that means new standards and new ideas about how to calculate the engineering of such materials [and] how to calculate the geometry of these shapes will need to be developed. You cannot simply recreate the same shape as the steel. Everything needs to be revisited, recalculated, re-engineered. And that takes time.’

Fortunately, while most other natural materials take a lifetime to grow and study, bamboo is fast-growing – which allows German researchers to experiment with it relatively quickly, and enables SA farmers to grow it with similar speed. As Pablo van der Lugt, head of sustainability at bamboo producer MOSO, highlights in a 2017 TedX Rotterdam talk, ‘a pine tree will take up to 30 years before it’s ready for harvesting. A hardwood tree such as oak might take up to 80 years before it’s ready for harvesting. Not even mentioning those non-renewable materials we so often still use’. And here he points specifically to iron, aluminium and PVC. ‘You cannot harvest them. You can only deplete them.’ Bamboo, meanwhile, can be harvested every four years.

Van der Lugt is a known bamboo evangelist, and while his ideas may have seemed quirky a couple of years ago, they are now quickly catching on across Africa. INBAR is adding an increasing number of African members to its network every year, and SA growers and manufacturers are slowly starting to see the benefits of the product.

As he says in his TedX talk: ‘Imagine a building material that is rapidly renewable; captures huge amounts of CO2 during growth; has a tensile strength stronger than steel; is harder than hardwood… Sounds nice, right? It is here. It is just overlooked.’

Jane Molony, executive director of PAMSA, on how paper and its  by-products are a... END_OF_DOCUMENT_TOKEN_TO_BE_REPLACED