In the shadow of stylish new green buildings, proudly basking in the limelight with their freshly certified high-performance facade and state-of-the-art green credentials, are masses of older, tired and not-so-smart buildings. These are the unfashionable high-rises, a bit grimy and unloved; the neglected office buildings and those that have managed to retain their good looks and now hide their shortcomings within their brick walls.

‘About 99% of buildings in South Africa are most likely very inefficient and not green,’ says Manfred Braune, chief technical officer at the Green Building Council of South Africa (GBCSA). ‘There is thus a huge opportunity and need for existing buildings to become more energy efficient and green, whether residential or non-residential. Over the past 10 to 15 years the demand for energy efficiency in office and retail buildings has grown significantly, and then more slowly in the residential sector. The demand for green buildings has mostly been in the office sector.’

Green retrofitting – the refurbishing of existing building stock with green principles particularly regarding improved energy efficiency – is gaining momentum in SA. By ‘recycling’ an old building instead of demolishing it, you save on resources such as construction materials as well as embodied energy and water that would have gone into building new from scratch. This also makes it easier to preserve the heritage of the original structure.

The GBCSA has developed a Green Star Existing Building Performance rating tool, which targets the whole building and reviews 12 months of operational data from an occupied building.

Alison Groves, regional director: building services at WSP Africa, says: ‘Our focus at WSP has been primarily on designing new buildings with Green Star certifications, but recently we have started to also take on projects aimed at improving the sustainability of existing buildings.’

There are hundreds of thousands of non-residential buildings and several million residential structures in SA – but according to Braune they don’t have to meet any minimum energy efficiency or green building requirements. ‘Because the regulations were only promulgated for new buildings in 2011, all buildings constructed or renovated prior to this date could have been built as inefficiently or efficiently as the designers and owner liked,’ he says.

The SANS 10400 Part XA minimum energy efficiency regulations, therefore, apply only to new buildings or major retrofits that have to undergo a council approval process. He calls for the urgent legislation of existing buildings in order to steer the country towards meeting the national greenhouse gas emissions reductions targets (42% below the ‘business-as-usual’ emissions by 2025). 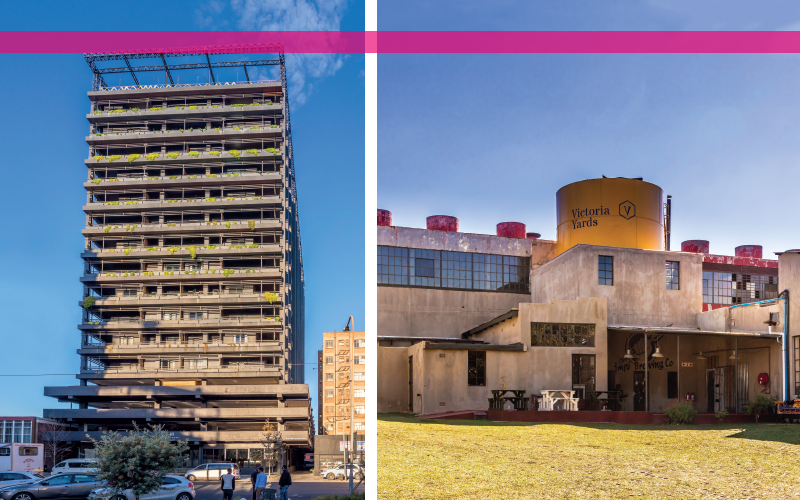 Another hurdle is the lack of reliable data. There is no accurate centralised record of how many buildings in the private sector exist in SA, what condition they are in and how many are being retrofitted, says Braune.

Individual organisations are keeping records for their own purposes, such as the GBCSA, whose database contains all the green building projects that have been certified through the council since its inception in 2007. Yet while the number of certifications has grown exponentially and is on an upward trajectory, the GBCSA has issued just more 400 green building certifications to date, which – according to the council – is ‘a drop in the ocean’.

However, progress is being made. The 11th GBCSA convention in October marked a milestone for green building in SA when the Department of Public Works officially launched its green building policy. The aim is ‘to provide leadership in the sustainable building sector, efficient energy, water and waste management, indoor environmental quality and comfort, ensuring sustainable product and materials management’. Much of this will mean the retrofitting of existing buildings.

The public sector, with its 100 000 buildings across the country, is critical for the sustainable building movement. To date, public buildings have remained largely untapped in terms of retrofitting, except for some pilot programmes funded by donor agencies.

As the biggest property owner in SA, the Department of Public Works must lead by example, said Dorah Modise, GBCSA chief executive, at the convention. ‘We know the department has many old, sick buildings but gone are the days when the private sector did not trust the public sector with regards to green building, and vice versa.’

The Department of Public Works’ green building policy was launched a month after a deadly fire in inner city Johannesburg catapulted the state of public buildings into the spotlight. The fire, in which three firefighters died, broke out on the 23rd floor of an office building that housed three government departments (Human Settlements; Health; and Co-operative Governance and Traditional Affairs). According to News24, the building was only 21% compliant with the Occupational Health and Safety Act. An internal report later revealed eight further government-owned buildings to be seriously non-compliant.

‘The fire in the Joburg CBD was a wakeup call,’ says Groves. ‘It demonstrated the urgency of retrofitting the existing building stock and the importance of regular, preventative maintenance as opposed to reactively fixing outdated building systems.’ The business case for retrofitting has been well documented. ‘If specified and installed correctly, systems and structures can produce a sustainable return on investment that can amount to between 20% and 70% of energy and gain revenue through this investment,’ says Groves.

Every project requires its own cost benefit and life cycle-costing exercise, but a rule of thumb says that lighting retrofits have a typical payback period of one to two years, while air conditioning retrofits could take between two and 10 years.

The capital outlay and payback depend on the extent of the refurbishment. Braune poses the question, as an example, of whether to retrofit an inefficient facade, or keep the facade intact and deal only with internal services. He prefers to talk about ‘deep’ retrofit over the term ‘state-of-the-art’, which typically implies it will be expensive or require a highly qualified facilities manager.

‘The journey towards a deep retrofit includes a mix of passive and active design, and considers everything from the facade – glazing, wall panels, insulation; roofing; shading; lighting; plug loads; air conditioning; building-management systems; behaviour change and so on,’ he says.

The way to start any retrofit project is with an energy and water audit to measure and benchmark usage before reducing it. Here the GBCSA Energy Water Performance tool comes in handy for benchmarking office buildings.

In the 2018 financial year, JSE-listed Redefine Properties reported it had installed about 2 300 smart electricity meters in 73 buildings, as well as smart water metering and control devices in 66 buildings. ‘Using smart-metering data enables us to operate buildings efficiently and increases consumption control to minimise energy and water use,’ the company was quoted in Engineering News. ‘Additionally, we have installed back-up water solutions at 13 key properties in Cape Town. This R40 million investment reduces our consumption of potable water by 800 000 litres per day.’ Thirty of the company’s buildings are currently registered for existing building performance certifications, to be completed in FY2019.

‘Attaining additional green certification or re-certification of our buildings remains on the agenda, as does the continual investigation of renewable energy sources such as solar,’ says Estienne de Klerk, CEO of Growthpoint South Africa in the company’s 2018 environmental, social and governance report.

‘We have spent more than R163 million on solar plant installations that have produced 11.9 GWh of power in FY2018 alone, and reduced carbon emissions by 11 346 tons. In addressing the water crisis in the Western Cape, we have invested R34 million in water-saving initiatives in the year under review,’ he writes.

Renewable energy is key to enhancing the energy mix for the buildings, and more solar installations will be completed in FY2019 to add a further 16 GWh per year, according to the report. Growthpoint is also ‘actively working on making our shopping centres more efficient’.

Vukile Property Fund has done just that and retrofitted solar installations on the roof of its shopping centres, including Meadowdale Mall in Germiston and East Rand Mall (co-owned with Redefine). The company commented that solar power is an ideal solution for malls as the sun shines during peak shopping times.

Meanwhile, Attacq and Atterbury, co-owners of the Mall of Africa in Waterfall City, Johannesburg, are installing the largest solar PV rooftop system in the southern hemisphere (4 755 kW on 45 000 m2) on top of their mall. This is expected to create CO2 and coal savings that translate into 157 fewer coal delivery trucks on the road per year.

In retrofitting, more attention is being paid to roof and facade spaces – not only for renewable energy but also as a ‘heat island’ to cool down temperatures in urban Africa. A British innovation called Evaporos envisages wrapping 3D-printed porous insulation panels around building facades. The flexible panels can be closed during the heat of the day and opened at night, reducing energy consumption for cooling and ventilation.

New green buildings increasingly feature roof and vertical gardens, which can also be retrofitted. The Public Works green building policy mentions the establishment of roof gardens, and a report on Arup’s Cities Alive investigates how vegetation on roofs and facades serves as a ‘living envelope’. The benefits include better air quality, heat absorption and stormwater management, as well as habitat creation and improved human wellness.

‘While much attention is rightly being given to improving the sustainability of our existing building stock, we should not forget the contribution that green facades on these buildings can make to improving the quality of life on the streets of our cities,’ the report notes.

The thing about retrofitting is that there’s scope for bold, imaginative solutions. ‘A tired old office block does not need to remain an office block. It could undergo a deep retrofit and emerge as residential apartments,’ says Groves. ‘We need to think about the way we use our buildings and make the most of what we have.’ This also applies to new, smart green buildings and the public spaces between them, but especially to the masses of old and sick buildings waiting for a new lease on life.