Winston Smith is a hard-working middle-aged government employee who is under constant electronic surveillance. At his work station there is a two-way telescreen and hidden microphones that mean he can be watched or listened to at any time. The content of his correspondence is also monitored.

Smith is not employed in a corporate office in 2019, although in some ways he may as well be. He is in fact the protagonist of George Orwell’s dystopian novel, 1984, which was published in 1949, and which is today considered a remarkably prescient portrayal of today’s workplace. Electronic monitoring of employees – to track attendance, productivity and efficiency – is now commonplace, but employers have access to far more sophisticated technology than Orwell was able to imagine 70 years ago.

Depending how much you are willing to invest in software, bosses can now view employees’ desktops live from their own browsers and play back video of earlier sessions. You can track which websites employees access while they’re connected to the company WiFi, and the files they up- or download. You can monitor their email communication, capturing attachments they send or receive, and even follow all the keystrokes they enter in apps and websites. And you needn’t stop there…

A bank in England has installed heat and motion sensors that record how long its employees spend at their work stations. A Swedish start-up incubator has implanted microchips in the 50% of its employees who opted into the plan. And Amazon has reportedly secured a patent for a wristband that vibrates when you perform a task incorrectly.

Big Brother has been a very busy boy. There are very good reasons why you may want to keep an eye on what are your employees are up to during business hours. In her master’s dissertation on an employee’s right to privacy versus an employer’s right to monitor electronic communication in the workplace, KPMG risk consulting director Candice Padayachee cites international research surveys that reveal sobering statistics: up to 40% of internet use in the workplace is not business-related; 37% of workers surveyed say they surf the web constantly on personal matters; and many of them access the internet at their desks to read the news, make travel arrangements and shop online.

‘From a South Africa perspective, a similar sentiment was revealed in a survey, which was conducted with companies listed on the Johannesburg Stock Exchange,’ adds Padayachee. ‘According to this survey […] 68.63% of employees admitted to “loafing” on the internet. It has been estimated that a company with 500 internet users could lose almost a million dollars in productivity annually from just a half hour of daily internet surfing by employees.’

If, right now, you are googling employee-monitoring software, wait … it gets worse. The footnotes reveal that this survey was conducted in 2001, way before the start of Facebook (2004), Twitter (2006) and Instagram in 2010, the same year smartphones became popular.

In addition to the impact on productivity and efficiency if your employees waste paid-for-time indulging in the distraction of social networking sites, Padayachee points out that unmonitored electronic communication potentially exposes your business to risks that include vicarious liability (as the result of harassment, defamation, copyright infringement and so on) and charges of sexual harassment and workplace discrimination, if for example an employee circulates racist or sexually offensive content. As Padayachee’s thesis suggests, electronic monitoring of employees has legal and ethical implications, with the issue of privacy (the employer’s versus the employee’s) the most likely flashpoint.

‘The existing legislative framework still does not specifically address the privacy concerns in a workplace context,’ writes Padayachee. But in a landmark case before the Constitutional Court in 1996, the court ‘recognised that no right is absolute and each right, including the right to privacy, is always limited by every other right accruing to another individual’.The balancing act is between the employee’s right to privacy, and the employer’s right to protect their property against misuse that could harm their business.

Padayachee notes that cases where the court has considered this clash of interests have generally confirmed the employer’s right to monitor and intercept electronic communications with or without employee consent, provided the monitoring is conducted to protect the business interests. However, her conclusion – that employee monitoring is a rational response to potential harm to your business – doesn’t give you the green light to spy on your employees in secret.

Surveillance without the employee’s consent or knowledge could lead to the breakdown of a relationship based on trust, loyalty and respect, she cautions, adding that a formal policy should be adopted, communicated, acknowledged and consented to – preferably from the moment an employee joins your firm.

The question of trust is central when considering whether electronic monitoring does in fact enhance productivity or threaten it. ‘Though the motive is to expedite productivity, monitoring employees can cause a feeling of distrust and suspicion that can harm the relationship between a manager and their workers,’ writes Anushree Sharma, writer and researcher at People Matters, an India based media organisation.

Vijay Amrit Raj, head of HR at Reliance Industries, likewise questions the impact of electronic monitoring on the employee’s perception of their employer’s role in their life, asking: ‘Is the trade-off between gathering detailed employee data and perception of invading privacy ultimately beneficial for an employer?’ Raj claims there is plenty of evidence showing that leadership styles exercising the least control are most positive for climate and business performance, and that corporate cultures that are humanising, inspiring, innovative and creative are the ones that will thrive in the future. ‘Employee monitoring is stifling,’ he says.

Employee monitoring erodes trust, writes productivity and tech writer Kayla Matthews at Rescuetime.com in an article titled Privacy versus Productivity. Matthews quotes a finding by a 2015 study published in the Journal of Economic Behaviour and Organisation, that workers who felt trusted not only produced higher-quality work but also created value for their companies. Matthews adds that most of the criteria for Fortune Magazine’s 100 Best Companies to Work For focus on trust issues, and that its research has shown that ‘trust between managers and employees is the primary defining characteristic of the very best workplaces’.

So you’re convinced: trust and productivity go hand in hand and you want to maximise productivity for optimal business performance. But you still want to keep an eye on what your employees are up to. Where do you draw the line? ‘As a first principle and organisational value, it is important to inform employees of decisions taken that will affect their performance,’ says Safia Lagerdien, a former senior HR practitioner at a large SA media organisation, who is now principal consultant at Bespoke Consulting. 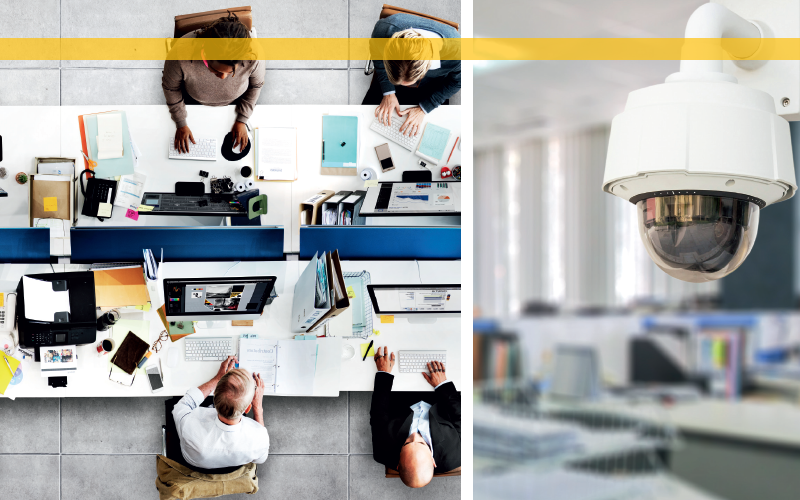 Transparency is key. Where companies do not inform employees that they are being monitored, and where the employers assume that the employees are unaware of being monitored, that assumption is bound to be false, says Lagerdien. ‘In such cases the levels of trust will be almost non-existent.’ Given the extent to which values and trust affect productivity, surreptitious, undisclosed monitoring is likely to backfire, she adds. You may also be looking for solutions to the wrong problem. ‘We know that technology in and of itself does not automatically result in increased productivity. It may have arguably resulted in personal productivity gains, but overall gains at an organisational level may not have been achieved. We know of cases where employees have performed well, but the organisation may not have achieved its business objectives. So personal productivity also in of itself does not equate to organisational productivity.’

Lagerdien has the following pointers for employers who want to promote productivity in ways that both protect personal privacy and serve organisational security. In addition to, and not necessarily as an alternative to electronic monitoring, she says, employers should realise that improving productivity is a complex matter. They should clarify for themselves how productivity is to be defined, and ‘start with the end in mind by identifying which activities, processes, structures and services in the company are the primary drivers of that defined productivity. ‘Once done, align jobs and tasks of individuals and teams to the real drivers of productivity.’

Lagerdien also recommends implementing quick-wins to improve employee engagement and morale, including enhancing open communication, overhauling the way feedback is given and sought, and empowering employees at all levels with appropriate degrees of decision-making discretion. ‘Transparency is always a good practice,’ writes Andreas Rivera in his article Spying on Your Employees in Business News Daily. ‘It’s important to be forthcoming about what you hope to accomplish and how surveillance aligns with your business’ goals.’

He cautions, however, that there is also such a thing as too much information. ‘While it’s fine to monitor employees’ computer usage to make sure they’re not wasting time on social media and frivolous browsing, employers should know they risk acquiring too much information. Employers have the burden of protecting that information, even that which comes from an employee’s personal browsing history or private data stored on a company computer,’ he writes. ‘Business owners have the right to know where their property is. However, when it comes to using GPS tracking of company devices like laptops and phones, it enters another murky area since employers can learn more than they need to about an employee’s activity when they’re off the clock.’

George Orwell put it somewhat differently: ‘There was, of course, no way of knowing whether you were being watched at any given moment. You had to live in the assumption that every sound you made was overheard and, except in darkness, every movement scrutinised.’

It’s really no wonder that Winston Smith (6079 Smith W to his watchers) was a drinking man.

Jane Molony, executive director of PAMSA, on how paper and its  by-products are a... END_OF_DOCUMENT_TOKEN_TO_BE_REPLACED