There’s a saying that when America sneezes, the world catches a cold. But what used to be a figurative take on globalisation and economic dependency has suddenly become a grim reality. Only now, the country ‘sneezing’ is China and the ‘cold’ is COVID-19 – a viral disease so contagious that it brought the life in cities across the globe to a complete standstill.

The coronavirus is forcing the world to rethink everything, including how cities are planned, designed and managed. The outbreak is likely to change how public space is used and how provisions are made for rapid crisis response (as demonstrated in the temporary conversion of buildings into COVID-19 medical facilities, with examples ranging from a field hospital in the basketball and netball courts of a Khayelitsha community centre, to the high-tech, paperless clinic housed in the Cape Town International Convention Centre.

In the private sector, Volkswagen SA converted an unused factory in Port Elizabeth into a fully equipped 4 000-bed temporary field hospital, and Old Mutual turned a former training centre and golf club-house into a 300-bed quarantine site in Pinelands.

Boogertman + Partners, the architects behind Johannesburg’s 2010 FIFA World Cup stadium, note that ‘a stadium designed for large volumes of segregated audiences to move swiftly within defined areas (players, spectators, media, VIPS, vendors) lends itself very well to creating space for patients, medical staff and suppliers to move through a treatment system while keeping the distancing needed to minimise the risk of increased infection. Each tier of the stadium was assigned a role in the flow of treatment from testing and patient assessment to high care in ICU units’. To this extent, flexible urban design also allowed offices to become lab spaces, and car parks (such as the one at Groote Schuur hospital) to be used as COVID-19 testing stations.

The crisis was – and continues to be – an opportunity to address existing shortcomings in SA city planning while strengthening urban resilience for future pandemics, alongside climate-related risks. The EU has pledged that the pandemic recovery plan will not harm climate goals. The C40 Cities Climate Leadership Group (which includes Tshwane, Johannesburg, Durban and Cape Town) advises that city leaders ‘be clear with residents: life will not return to “normal” for the foreseeable future’. Pandemics, like wars, accelerate trends that are already unfolding and – despite the terrible destruction they cause – have resulted in improvements to urban life.

History has shown that cholera, yellow fever and other infectious diseases inspired better indoor ventilation, the provision of clean drinking water, regular rubbish removal in cities, and underground sewerage as well as recreational spaces, such as New York’s Central Park and the Victoria Embankment along London’s River Thames.

In the mid-19th century, physician John Snow tracked and mapped the outbreak of cholera in London. His famous cholera map laid the foundation for modern epidemiology, making a connection between public health and the built environment.

Today, digital infection-tracking apps and geomapping help contain the spread. At a local level, the Western Cape COVID-19 dashboard visualises the number of cases and deaths in the province, enabling anyone with internet access to follow how different age groups and suburbs are affected.

Will the shiny office towers in Sandton and elsewhere remain viable in the post-COVID world? Architect Thomas Chapman, founder of Local Studio, doesn’t think so. Instead, companies are likely to downscale their existing office space as fewer employees will be needed onsite, due to social distancing, remote working and job losses.

In a cruel twist, it’s the very things that make our cities great that suddenly carry the highest risk. Cities have become incubators of the air-borne virus that thrives on human interaction and hyper-connectedness.

‘COVID-19 is the antithesis of urban life’, says Alison Groves, regional director of building services at WSP Africa. ‘The requirements of social distancing are anti-community and counter all sustainable urban design.’ 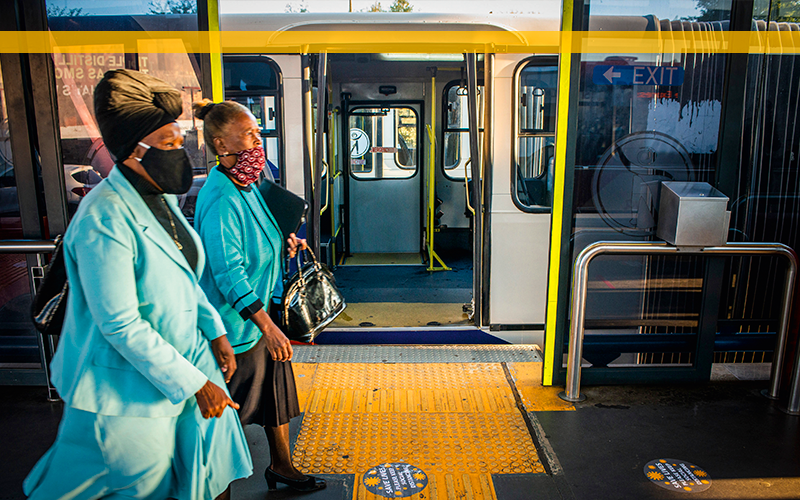 This became obvious during the country’s hard lockdown, as offices, restaurants and shops closed, and urban squares and commuter hubs became no-go zones. Johannesburg, Durban and Cape Town resembled ghost towns. In the informal sector, hawkers and hustlers were left scrambling for their livelihoods, in greater fear of hunger than catching the virus.

‘Epidemics tend to highlight social inequalities,’ says Warren Smit, research manager at the African Centre for Cities at UCT. He points to the high concentration of COVID-19 infections in Khayelitsha and Gugulethu in the Western Cape, where many residents are shack dwellers and, as such, particularly at risk. Social distancing is difficult in overcrowded living conditions, and the lack of adequate water and sanitation services makes frequent hand-washing (the first defence against the coronavirus) tricky.

In response to COVID-19, the government has started to de-densify some areas through re-blocking and resettling. ‘Re-blocking’ means re-arranging shacks in densely populated informal settlements to open up public spaces and access routes for emergency vehicles and basic service infrastructure – and to enable social distancing.

Lindiwe Sisulu, Minister of Human Settlements, Water and Sanitation, explained in April 2020 that in some cases the construction of planned housing units would be fast-tracked and that some residents already on waiting lists would be resettled into units that had been completed. She said that in other overcrowded communities, multi-storey units would be built to resettle people as a temporary solution. To combat the spread of the disease further, the department provided underserviced communities with water storage tanks and water tankers.

‘Attempts to de-densify overcrowded settlements need to be done carefully and only where absolutely necessary, with extensive participation by residents, in order to avoid making people more vulnerable and at risk,’ says Smit. ‘Residents who are relocated often end up worse off, further away from employment opportunities and facilities, and with their social and economic networks severely disrupted. In the short term, facilitating the building of double-storey structures may be a better way of reducing overcrowding quickly.’

According to Groves, any de-densifying efforts in cities should go hand in hand with vertical developments: multi-storey residential buildings rather than single-storey ones to minimise urban sprawl. However, there’s a difference between overcrowding and density.

‘UN-Habitat defines overcrowding as more than three people per habitable room of a dwelling,’ says Smit. ‘Density can be measured in the number of dwelling units per hectare. It has been estimated that at least 25 to 50 dwelling units per hectare across a city is necessary for viable public transport.’ Denser and more compact cities are usually also safer and more sustainable, and offer easier access employment opportunities and a range of facilities, he says. ‘It’s possible to densify a city while simultaneously reducing overcrowding and making it more resilient to infectious disease.’ This can be done through extending existing dwellings, where possible, or through the provision of well-located affordable housing.

Chapman is involved in the densification of inner-city Johannesburg through the design of compact, affordable apartments. The latest project is VujaDe (a wordplay on déjà vu). The self-contained, trendy micro apartments (17 m2) go for as low as a R3 399 monthly rental, enabling low-income city workers to live closer to their workplace. Its location adjacent to Maboneng enjoys the ‘walkable city’ or ‘work, live, play’ concept, where residents’ daily needs are met within a small radius. In the same vein, plans are under way to turn Paris into a ‘15-minute city’ and Melbourne into a ‘20-minute city’. The pandemic has emphasised the value of community, shopping locally and shared public spaces. ‘A key element at VujaDe is its shared courtyard and open space, which make up half of the 5 000 m2 groundfloor area,’ says Chapman. ‘The groundfloor apartments open onto the new park we created and were let in one day.’ He expects that COVID-19 will further increase the yearning for green spaces. ‘It’s like the Parisian model, with the wealthier residents living at the bottom of a building; where having a garden becomes more desirable than the panoramic view from higher up.’

Worldwide, pandemic-related restrictions have led to city dwellers appreciating the value of being outdoors. Some cities, such as Madrid, Cologne and Calgary, closed off streets to cars, and some, such as London, created extra-wide bicycle lanes.

In Bristol, the Old City centre was pedestrianised and pavements in shopping streets were widened. These long-term transport ambitions were accelerated by COVID-19, according to the city’s mayor, Marvin Rees. ‘Bristol can emerge from this crisis in a more inclusive and sustainable way by improving access to public transport and introducing safer areas to walk and cycle,’ he said in May this year, as quoted by the Times. ‘Action we take now will contribute to reducing air pollution, improving people movement and encouraging alternative sustainable ways to travel.’

COVID-19 has highlighted what’s wrong with SA’s cities, but it has also shown that progress such as fast-tracking housing for those on waiting lists, de-densifying overcrowded settlements and providing water to vulnerable communities is possible. Many improvements will sadly not be permanent, but the fact that the official pandemic-response was so swift and that different sectors are collaborating to find solutions – not just in terms of temporary field clinics – gives hope that urban life in SA will become more resilient for the future.

Jane Molony, executive director of PAMSA, on how paper and its  by-products are a... END_OF_DOCUMENT_TOKEN_TO_BE_REPLACED