In Independence Avenue in central Windhoek stands a five-storey building. A central glass-roofed atrium ensures maximum use of natural lighting, there are solar panels on the roof and a water-treatment plant in the basement. Luminaires in the offices have embedded sensors, so they switch off when rooms aren’t occupied. There are fuel-efficient vehicle parking bays, cycling facilities and water-wise gardens on the roof terraces. These are only some of the sustainable design features that earned the @Parkside building Namibia’s first 5-star Green Star As Built rating from the Green Building Council of South Africa (GBCSA).

@Parkside serves as retail banking and office space for FNB Namibia’s operations. As a building client, FNB wanted to avoid burdening Windhoek’s technical and civil services, according to Eranduth Rambaruth, the project technologist from architectural firm Boogertman & Partners in Johannesburg. They wanted a building that would respect local resource conservation through reduced energy consumption, and re-using and recycling where possible. This wasn’t the first time FNB had adopted this approach to the built environment, as FNB’s Fairlands campus in Johannesburg shows.

‘Boogertman & Partners are founding members of the Green Building Council of South Africa, so Green Star ratings do factor in our design processes. The building was designed to meet a 4-star rating, but it eventually achieved a 5-star As Built rating,’ says Rambaruth, who worked closely with Gregory Rice from sustainability consultancy and engineering firm WSP. 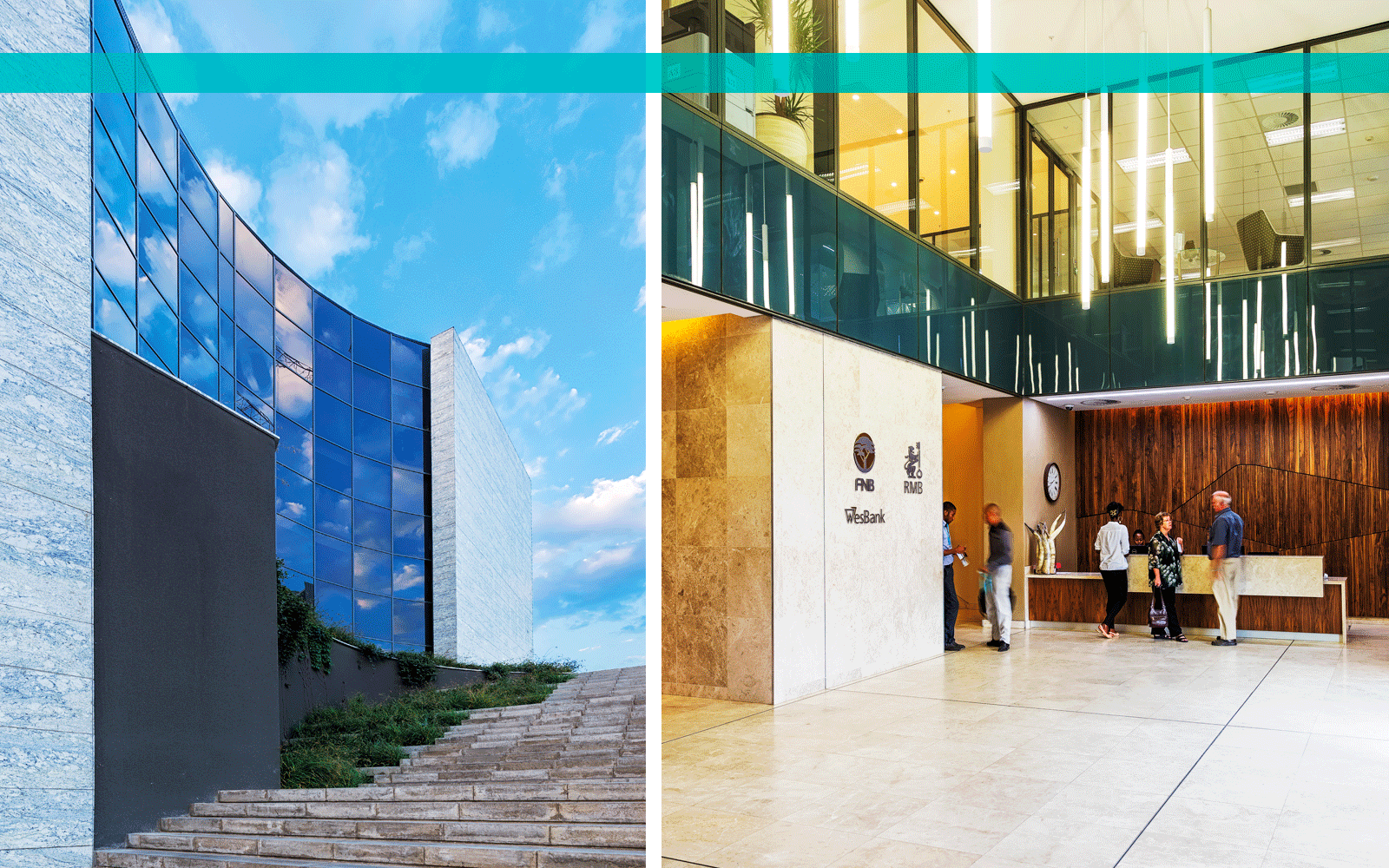 Future-proofing predicts the building’s life cycle by considering possible energy, waste, social and environmental factors or changes. This is vital in green building. ‘We’re in an environmental space where the future is unknown, and probably disastrous. We have to acknowledge this by including design aspects that may aid us in the future,’ says Rice. ‘For example, think about water reticulation end points, and the possibility of connecting these to a central tank, or infrastructure paths for wire-ways from the roof to the basement. Or clear wire-way paths within ceilings to the facade, for possible facade solar-energy generation. Constructing a green building is no different from thinking about the decisions we’ve always made, but with a life-cycle approach.’

With @Parkside being set in a hot and arid context, low-energy cooling and water issues were a large focus of the future-proofing. Mechanical engineers Spoormaker & Partners implemented a decentralised variable air volume system, and a hydraulic rainwater and greywater capture and filtration system was installed to reduce the use of municipal water. There are low-flow fittings and fixtures on the shower heads and basin taps. The water system exceeds even the most efficient benchmarks set by the GBCSA.

‘This building is as environmentally adapted to its surroundings as it can be,’ says Trinesh Chanka, of Izazi Consulting Engineers, which provided wet services. ‘The context required that we look at water reclamation, which we consider on almost every job we do now. With Windhoek being in an arid area, everyone is sensitive to the water issue. So we decided to use both rainwater and grey-water recycling. We recycle greywater from the showers and basins, which we filter and reuse for toilet flushing and the urinals.’

According to Chanka, this system saves about 2 700 litres of water per day. It includes low-flow fittings and fixtures, greywater storage and filtration in the basement, and a Geberit pluvia roof drainage system to help deal with flash floods, which are associated with the region. ‘While greywater harvesting and the like may not make immediate financial sense to some, it makes environmental sense and is the socially responsible thing to do. Financial factors alone aren’t that persuasive, so we need another driver that everyone can agree on. The client, engineers and everyone involved in such a project should agree to spend more on water-conservation efforts to do the environmentally responsible thing,’ he says.

‘One of the biggest challenges with water reclamation is the filtration and treatment of greywater – from showers, sinks and so on – because of organic matter. But it’s doable. You start by filtering out the solids – soap scum, or leaves if it’s rainwater,’ says Chanka, who adds that the next stage involves filtration using bio balls to break down organic matter before the water is treated with ozone.

Stormwater run-off is also stored in the lower basement, to be used for landscaping during low rainfall. ‘If a project is in a region that experiences flash floods after long periods of no rain, you have to deal with that through attenuation,’ he says.

In addition to energy modelling during the design phases, WSP helped the project obtain Green Star certifications. In 2014/15, @ Parkside received a 4-star Green Star Design rating for its sustainable approaches. Having 55 points (10 above the 45-point threshold) meant the team was able to explore whether more points could be allocated to raise its rating. Further innovations and a review of operations showed that the building’s sustainability initiatives were installed and operating at full efficiency, and @Parkside received 64 points – four above the As Built 5-star threshold. A context-specific Green Star rating system developed during the pre-construction phase was approved by the GBCSA, making a Green Star SA-Nam Office v1 rating tool publicly available for application in Namibia. 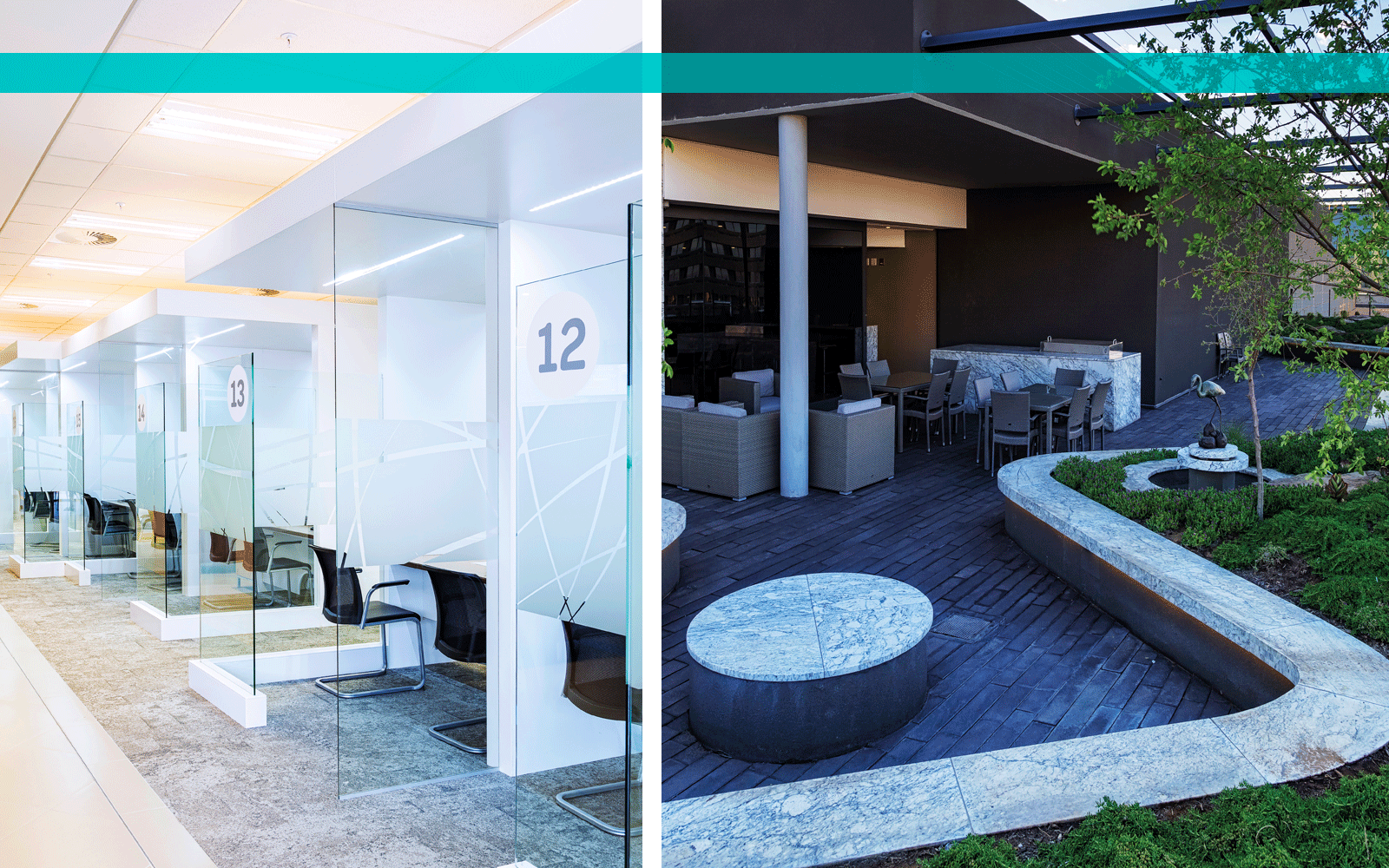 The building’s sustainability and efficiency were overseen by FNB throughout the project. In Namibia at the time, environmental management and auditing systems weren’t widely implemented, so FNB helped develop one of the country’s first environmental management programmes to address things such as waste, stormwater run-off and erosion during construction.

Since the contractor team wasn’t familiar with the Green Star-certification processes, numerous teleconference calls, training workshops and site visits were needed. Rice values the knowledge-sharing that resulted. ‘A large part of the knowledge transfer is the grassroots principle of sustainability. This is well known in rural settings, where communities live mostly off what the Earth provides. In a more commercial setting, the background principles need to be embraced by the construction team, informing their decisions. It seems onerous but it’s merely keeping up good quality standards, which is the expectation from the building owner and the end user,’ says Rice.

To ensure the building operates as efficiently as intended, a user guide informs occupants how best to use the space to reduce environmental impacts. ‘The principle is to convey the aspects of sustainability to the building user, and to allow for these thought processes to be carried out into their personal lives,’ says Rice. ‘It’s important to stress that we’re on one Earth together; each action towards a better future is important.’

A state-of-the-art smart-building management system (BMS) monitors energy consumption and savings around the clock. ‘Something can only be managed if it is monitored,’ says Rice. ‘The system identifies irregular trends, which suggest possible wastage or system errors. A BMS helps the building operator identify locations of water wastage – a leak, for example – as well as understand the web of energy consumption within the building.’ Integral monitoring and control devices include differential pressure detectors, air-quality detectors and variable speed drives. 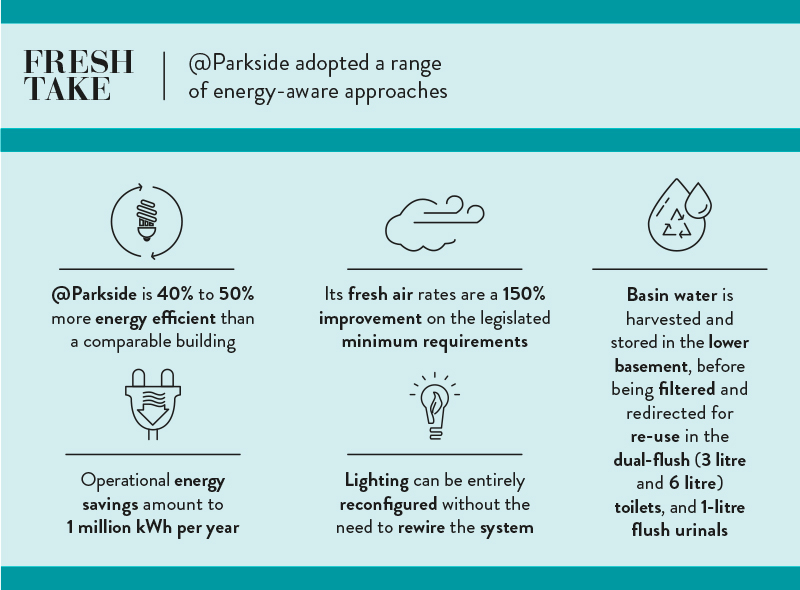 Of the building’s parking spaces, 5% are reserved for fuel-efficient vehicles, mopeds, scooters and motorbikes. Building occupants are encouraged to use bicycles through the provision of bicycle bays, facilities such as showers and safe storage for bikes. An active street network, with trading stalls and amenities included, ensures people don’t have to travel off-site unnecessarily. An access flooring system contains recycled materials, and a healthier working environment was created by using low-VOC paints, carpets and sealants.

To reduce construction wastage, quantities of building materials coming from SA were strictly specified. As recycling is a challenge in Namibia, FNB offered start-up support to a local waste-recycling service provider, which also boosted the local recycling industry. The building has dedicated storage areas for recycling waste and separating office consumables for collection.

For the HVAC, a sophisticated chilled-water plant, connected to decentralised air-handling units (AHU), generates cooling (and reverse heating if needed); while the curved, glazed facade is designed to reduce heat gains.

‘This is coupled with an efficient HVAC system that makes use of an economy cycle – free cooling – when the system allows for it. Basement extract fans are high energy users within a building. At @Parkside, the system is well designed to activate only when necessary, which creates a huge saving on the building’s overall energy consumption. A solar PV plant on the roof reduces the daily consumption from the grid.’

The HVAC system, with its air-handling plant rooms, allows vast amounts of fresh air into the building, and delivers more than 12.5 litres per person of fresh air through two units in the building. Dedicated exhausts extract printing and photocopy pollutants. Insulation and HVAC refrigerants are free of ozone-depleting gases.

These approaches illustrate how @Parkside serves as an exceptional example of sustainable operational energy management and environmentally friendly design on the continent.