The brief for Rabie Property Group’s Sable Park – situated on a prime gateway site to the south of Century City’s Bridgeways green zone, with iconic views of Table Mountain and the city – wasn’t specific, according to lead architect Henry Abosi, associate director at dhk – ‘just a “wow” version of the office typology established for the commercial species in the precinct’.

The architectural company was a natural choice, having worked on some of the most significant public buildings in Cape Town (the airport, the CTICC, the station) since its inception 20 years ago, as well as projects in locations as diverse as Ghana, Mauritius, Switzerland, the US and Colombia. But where to begin?

‘Design is very personal for me,’ according to Abosi. In the case of the twin buildings required for Sable Park, it came down to mathematics and movies. ‘The design was inspired by aspects of cinematography; of being filmed and captured,’ he says.

‘It’s essentially pure forms, boxes, angled against one another as though they were moving, spinning, about to fly off – and then someone pushed pause or shouted “cut!” They’re dramatically animated.’ 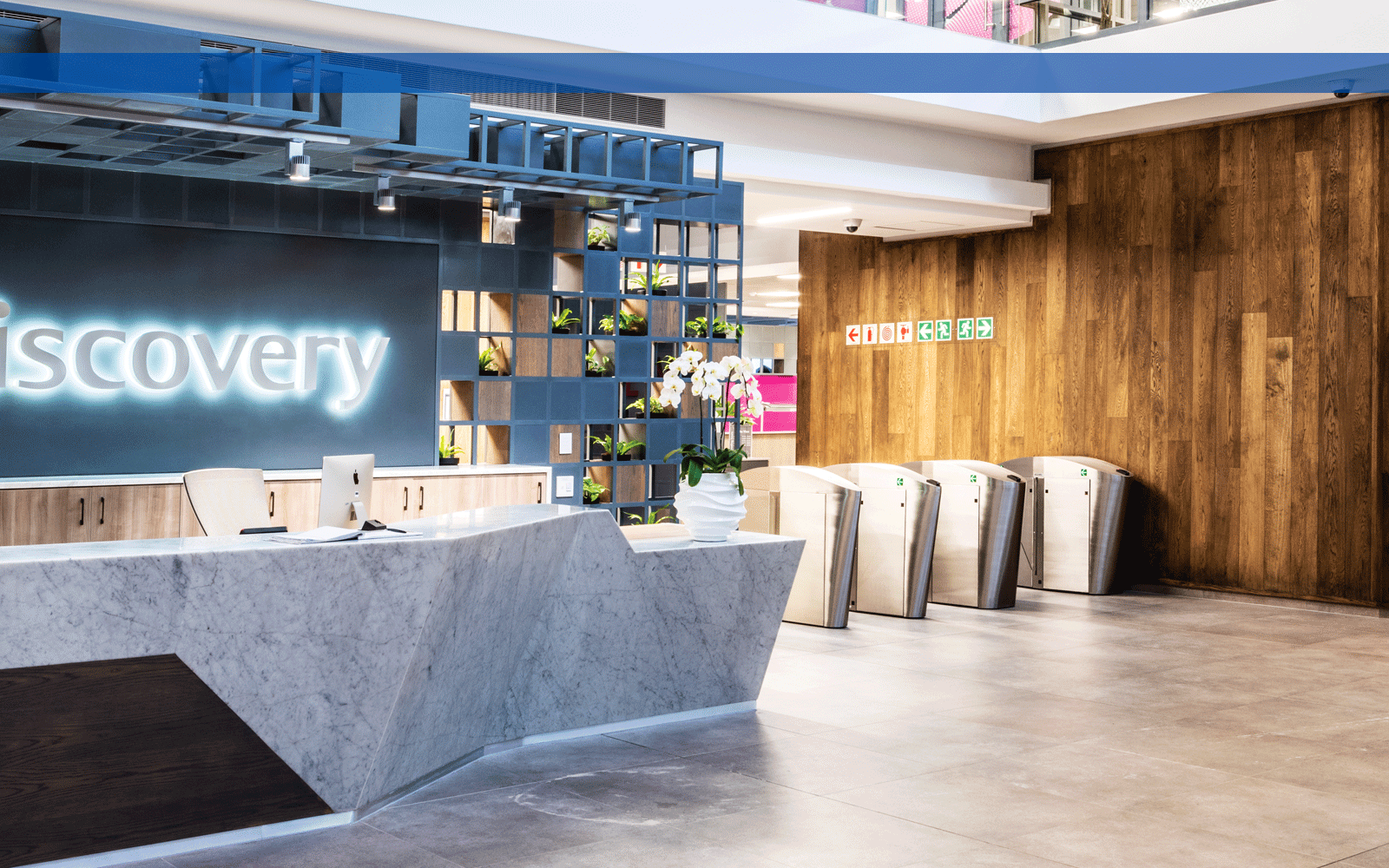 They were also, he concedes ruefully, a head-ache to build. ‘Fortunately, we had great engineers, and a client who understood and shared the vision.’ In the end, the most challenging aspect of the design also proved the most rewarding: creating the ‘shadow gap’ between the boxes that makes them appear to hover magically above one another. To achieve this, Abosi worked closely with Jaco de Villiers, technical director of building structures at Aurecon.

A complex double-slab component was used. ‘The gap is achieved by a perimeter concrete downward beam projecting into the ceiling of the space below, and extending outwards to form a protruding flange or slab to echo the plan of the floor slab below,’ says Abosi. ‘The “shadow gap” occurs wherever the two distinct boxes come into contact – just below the second floor, where the layered double-height mass is on top, or just below the third floor, where the glass cube is on top.’

However, the shared vision for Sable Park wasn’t simply of an iconic development – it was of a powerfully green one, geared to conserve resources and deliver an optimally healthy work space for both body and mind. This is core to the ethos of not only dhk and the Rabie group but also to Discovery, Sable Park’s prime tenant.

Discovery occupies the larger of the two buildings – 8 300 m2, against the other, an inverse, near-repeat design of 8 000 m2. To optimise natural lighting, each building has two wings off a central core and a light-filled quadruple-volume atrium, spanned by a series of bridges at the edge of the main core. 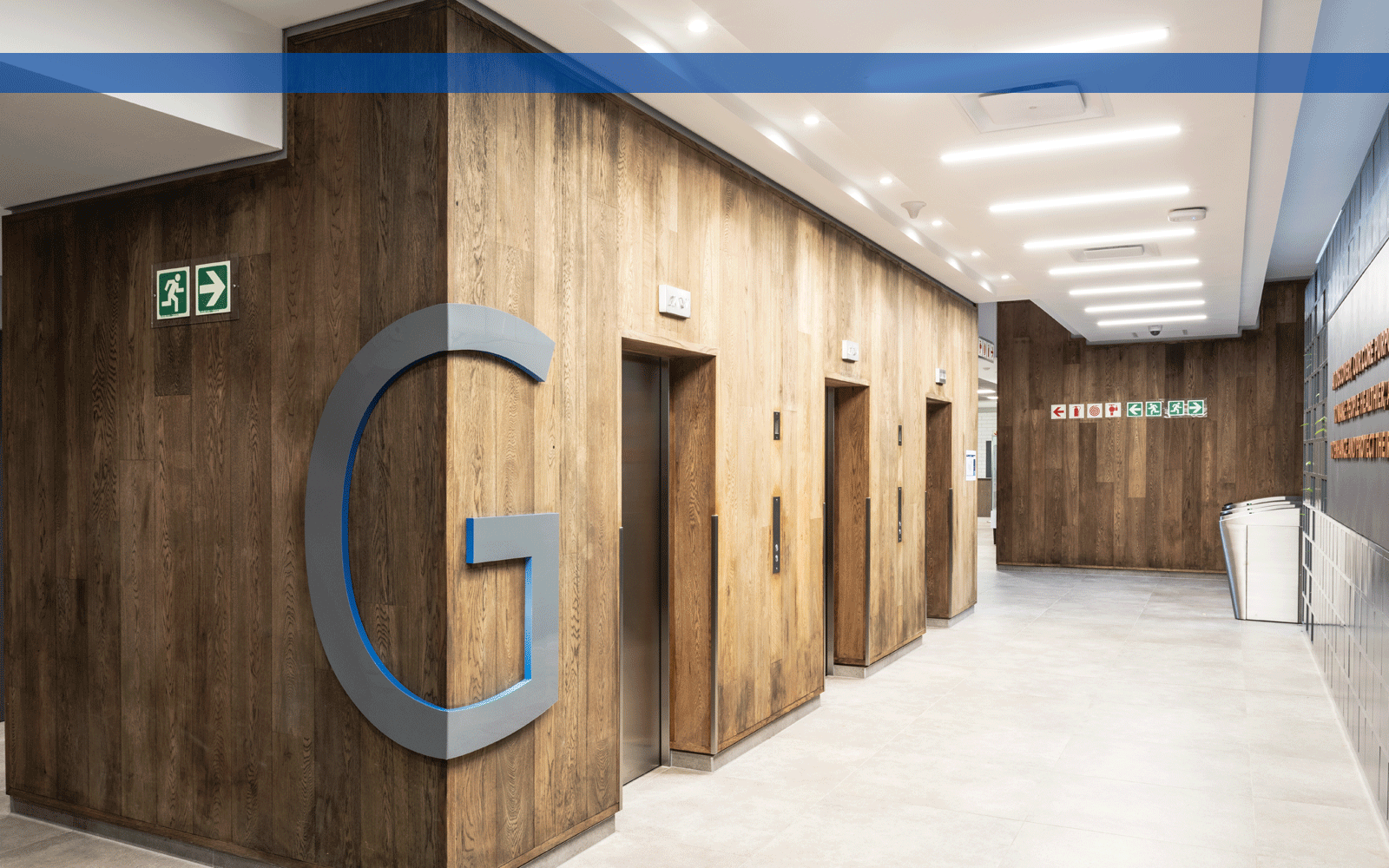 ‘The main lobby of each building has a feel of Stanley Kubrick’s 1960s sci-fi classic, 2001: A Space Odyssey,’ says Abosi. ‘The cores were conceived as a parody of service blocks, satirically designed as massive, offset concrete cubes shoved between the two glass wings.’ They are stand-alone elements, exposed on both sides of each building. From the back, they protrude and are visible from more than a kilometre away. On the front end at the foyers, they are clad in oak timber panels, the lift doors visible from the street and neighbouring blocks.

‘They form the hearts of the buildings, circulating people left to right, up and down, and into different chambers in the buildings,’ says Abosi. The concrete blocks also create sound buffers for the atriums.

The vertical split of each building into two uneven blocks – a double-volume layered mass and a single-volume crystalline cube above; the masses hovering over one another with that ‘shadow gap’, twisted at an angle – stirs visions of Batman. 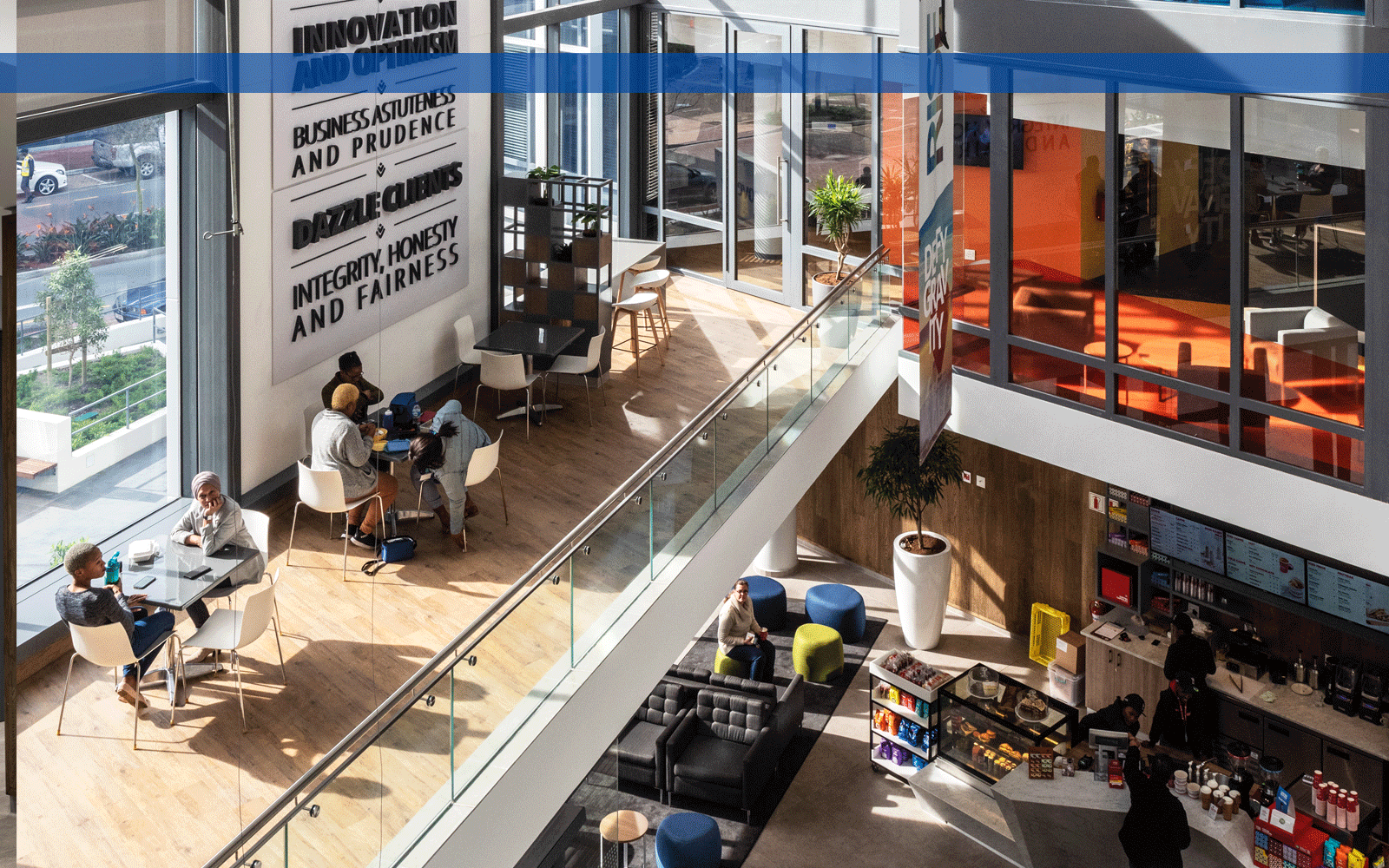 Crucially, it is also fundamentally green. The twists orient the cubes to maximise light and mountain views, and create outdoor terraces, giving the buildings a 360° orientation. Passive solar control uses the brise soleil concept, reducing heat gain within the building by deflecting sunlight, Abosi points out. And the facades in working areas are slightly recessed, with an aluminium shading layer over them for glare, while the top ‘floating boxes’ have curtain-wall facades with low-e high-performance glazing.

This dual approach, implemented early on, not only improves the passive solar protection, but also helped reduce the costs of the building, he says. It also creates a playful interchange between the textures, contributing to the aesthetic complexity.

Sable Park has been awarded a 5-star Green Star Office Design v1.1 rating from the Green Building Council of South Africa. Among its many sustainable features, says green consultant Mlondolozi Hempe of PJCarew Consulting, are LED light fittings used throughout, with daylight and occupancy sensors that dim lights or turn them off when rooms are not in use, while shading structures and internal blinds on all windows assist in glare reduction and heat gain control. 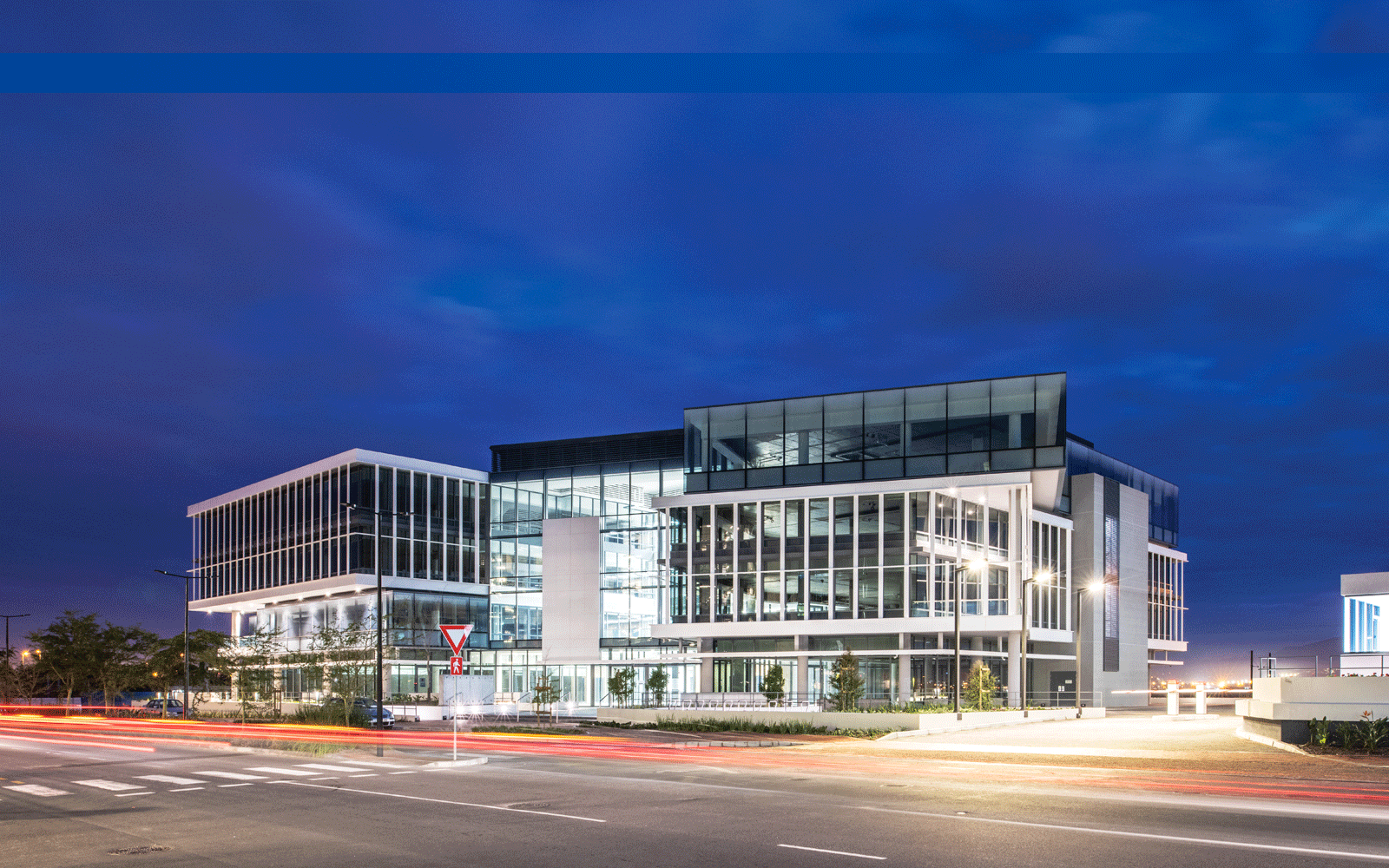 The buildings allow for natural daylight in 45% of the office spaces, reducing the use of electrical lighting, and promoting productivity and a sense of well-being, while windows are fitted with fixed shading devices to prevent overheating.

There’s also a personal touch: override switches enable workers to control their own spaces. If they feel they have sufficient light and the lights are still on, they can override the intelligent lighting system and switch off the lights, or vice versa. 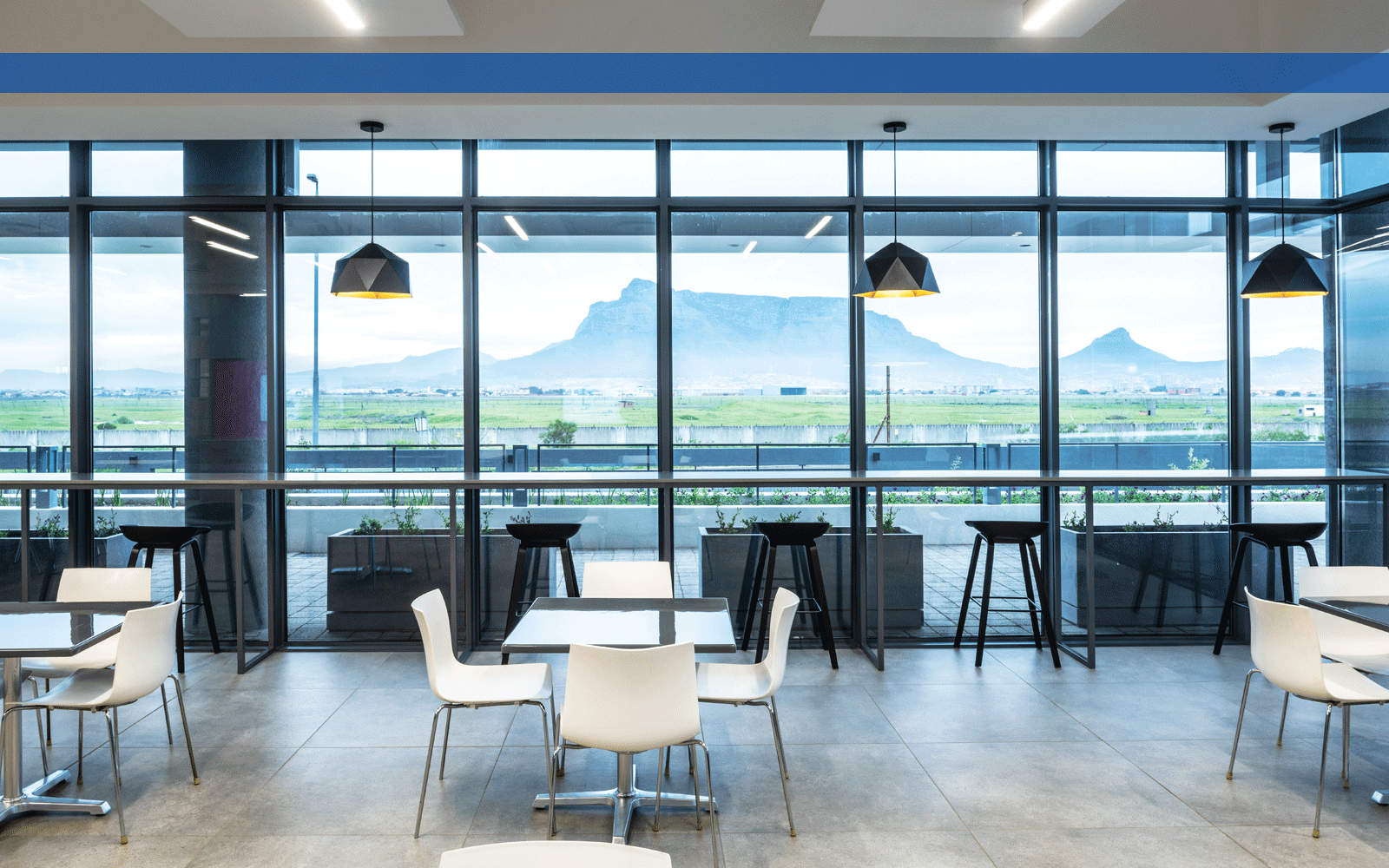 ‘Half the parking is naturally ventilated, reducing mechanical ventilation and saving energy,’ says Hempe. ‘Parking spaces include clearly marked prime bays for use by alternative-fuel vehicles, car-pool vehicles, motorcycles and bicycles – and lockers and showers are provided.’

Water for the ablutions, air conditioning and cooling systems, and landscaping is drawn from the recycled Potsdam municipal sewer treatment facility, and then treated to safe levels.

‘The HVAC system is run by efficient water-cooled chillers serving intelligent air-handling units designed to monitor outside and indoor air temperatures and maximise opportunities presented by the differences,’ says Hempe. ‘The performance of the Sable Park buildings in terms of energy, water and waste is measured through automated monitoring systems, and targets are set to improve them.

These include a 60% reduction in energy consumption compared to the requirements defined by the SANS 204 guide for energy-efficient buildings; potable water consumption 65% below the Cape Town Municipality and Australian averages; and a 70% reduction of waste.’ There’s also a waste-recycling storage area in the basement where waste is sorted and stored for collection by recycling contractors each week. 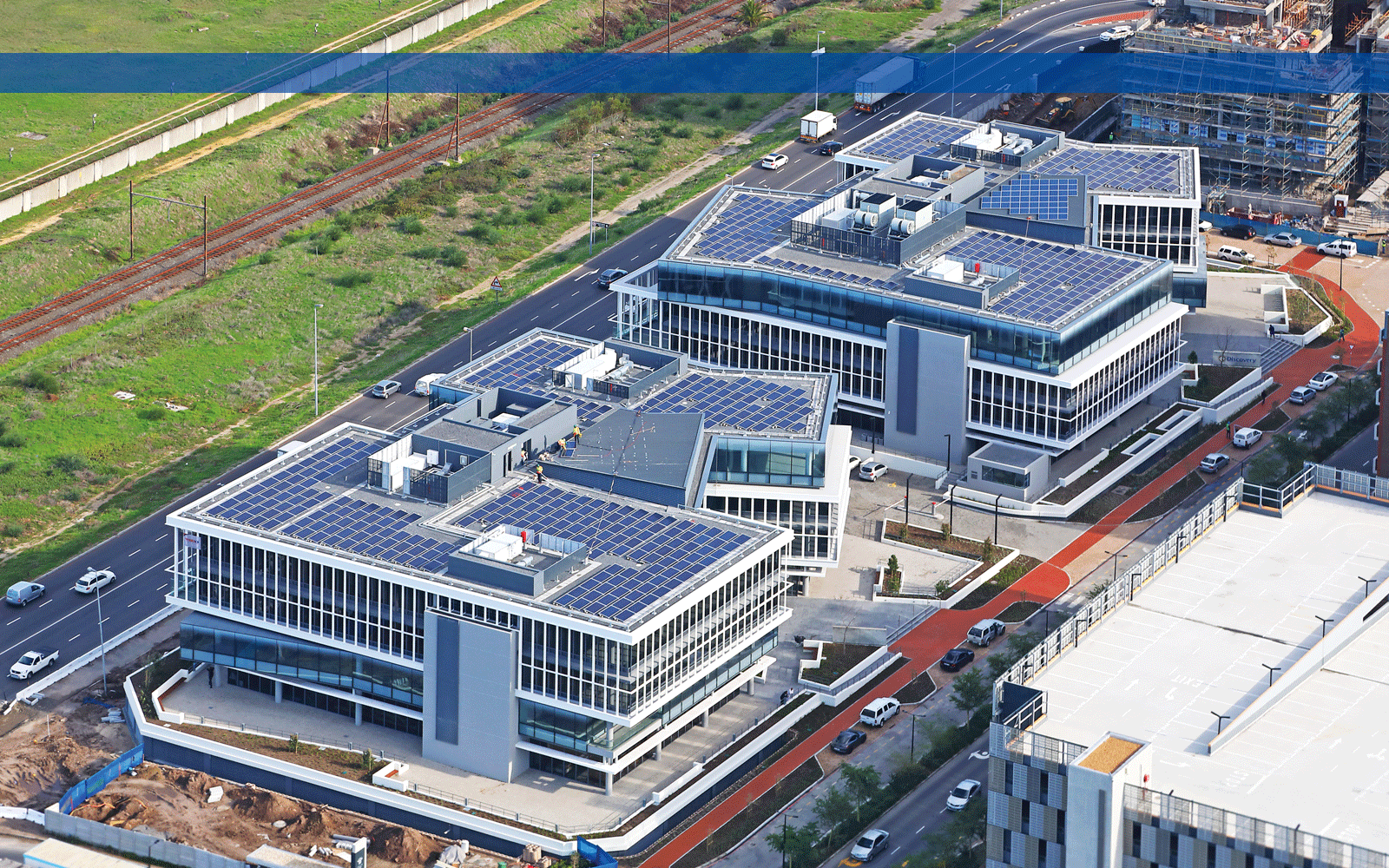 In much the same way as the design of the building, landscaping has played a crucial role in the development of Sable Park, with each building appearing to be embedded in a green platform. A series of terraces on all four sides of both buildings works as outdoor lounges. Designed as separate winter and summer indigenous gardens, they have been formed by cut-outs in the building, and planted with aloe, agapanthus, Buddleia and fever trees (Vachellia xanthophloea), encouraging workers to get out during breaks or with their laptops for a change of (work) scenery.

‘The landscaping philosophy is aimed at creating an environment where the built structures are enveloped by a green structure, which reaches across the greater precinct to form a unified urban garden and link the diverse architectural styles,’ says Alistair Turrell, landscape architect at Planning Partners. 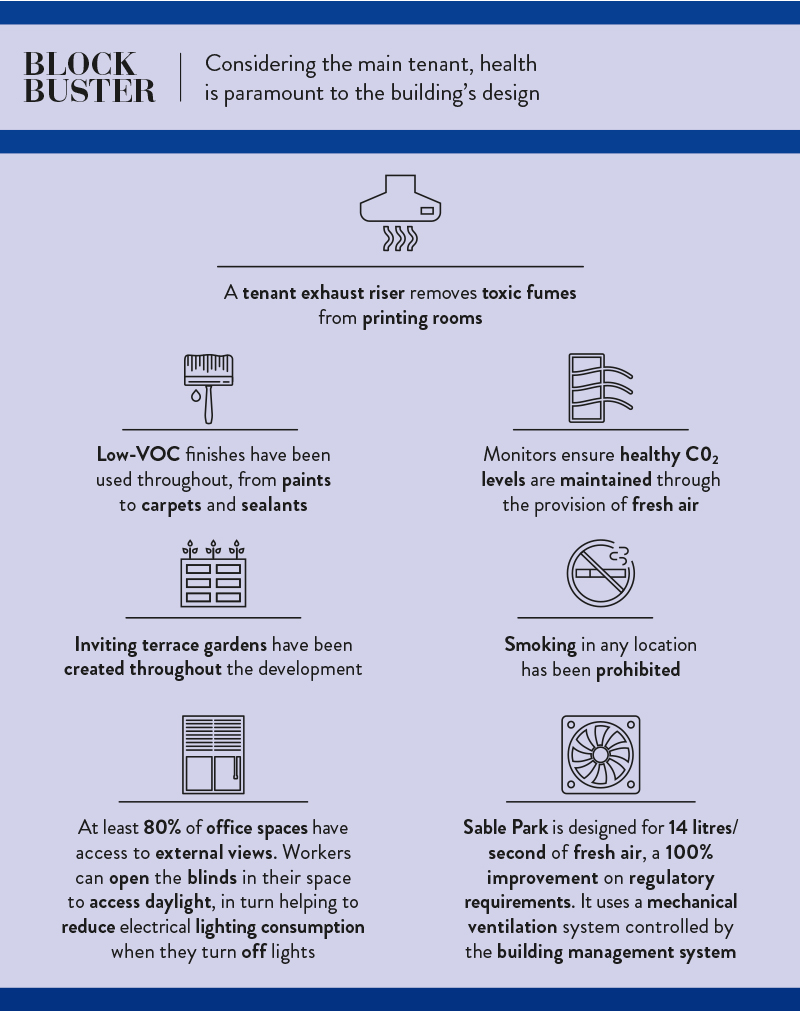 The fever trees have been planted for their striking architectural form, and because their almost see-through canopies provide a foil to the architectural creations beyond. The landscaping on the podium level is housed in structured planters that create a green fringe to the building, while at the main entrances to the two buildings, large Celtis trees have been planted in wind-protected pockets.

Along Sable Road, the southern boundary, a mixed thicket of large shrubs and trees creates a densely vegetated edge, while along the western and north facades, free-standing troughs have been populated with fast-growing hedge material for an extra layer of protection against heat and glare for ground-floor offices. This, says Turrell, means that at times, ‘the buildings will appear to emerge from a green mist below’.

Jane Molony, executive director of PAMSA, on how paper and its  by-products are a... END_OF_DOCUMENT_TOKEN_TO_BE_REPLACED