PricewaterhouseCoopers, or PwC as it’s now known globally, provides industry-focused legal, assurance, advisory and tax services to public, private and government clients in all markets. And while the eyes of creatives may glaze over at the thought of designing a corporate fit-out for what is essentially a high-powered accounting corporate, architects VDMMA (in association with Jacobs Parker Architects), Formist Signature Spaces interior designers and Arup engineers and sustainability consultants, have broken barriers with each step of PwC’s move to its new quarters at the Cape Town V&A Waterfront.

It was the perfect opportunity for revolutionary change. PwC was moving its staff from an outdated brick building to a fresh office space in the Silo Precinct, which has grown out of one of the city’s most striking industrial relics – the 1921 grain silo, now reinvented as the extraordinary Zeitz Museum of Contemporary Art Africa.

‘No 5 Silo was the third building in the precinct to be completed,’ says architect Lloyd Rubidge of VDMMA, which handled the project. ‘And it was designed not only for new office space to increase the V&A Waterfront’s rental stock but, importantly, to extend the sustainable and public nature of the precinct. We furthered the green agenda at every turn and sought design themes that suited the location of the precinct as part of a working harbour – themes of fit-for-purpose, workmanlike and dockside-warehouse. 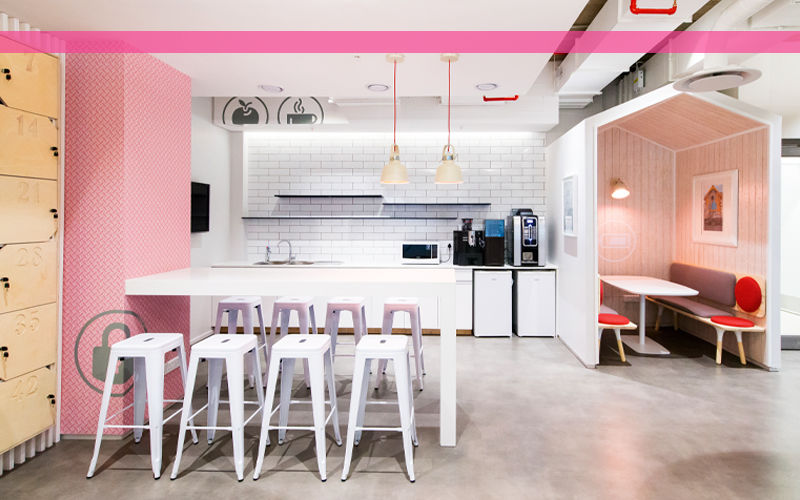 ‘Expressed materiality and appropriate detailing were considerations just as important as resolving the functional requirements of the brief, and this reinterpreted and extended the ideas already explored in No 1 Silo,’ he says.

Materials selected for the building were exposed concrete, raw concrete-blockwork, unitised glass and tile cladding, glass curtain-walling, rough-cut timber panelling, exposed steel structural members, steel framing and grillages, cobble and flagstone paving, bold ‘warehouse signage’ and street lighting, says Rubidge. ‘The roof space is treated as a “fifth elevation” and a usable space’ – landscaped and used by office workers as a breakaway space. The green agenda is furthered by innovations such as a central cooling system, which supplies pre-cooling using seawater from the harbour, and solar panels on the saw-tooth roof over the street. In addition, services and consumption are monitored with a building-management system that’s provided a case study for important industry research.’

When it came to the interiors of this space, the brief from PwC could not have been more creatively liberating if it were from an ad agency or design house. ‘They wanted an office of the future,’ says Karin Lategan, director at Formist Signature Spaces. ‘They wanted a fit-out that would re-energise the working environment for staff by challenging perceptions about their industry and creating a more inspiring and effective workspace.’

The team achieved this, she says, through vibrant interior design and innovative space planning. One of the biggest challenges was to accommodate PwC’s 650 workers in a smaller area than their old offices at Century City, while creating a healthier, more relaxed work lifestyle and a more collaborative environment that moves away from traditional hierarchical structures. 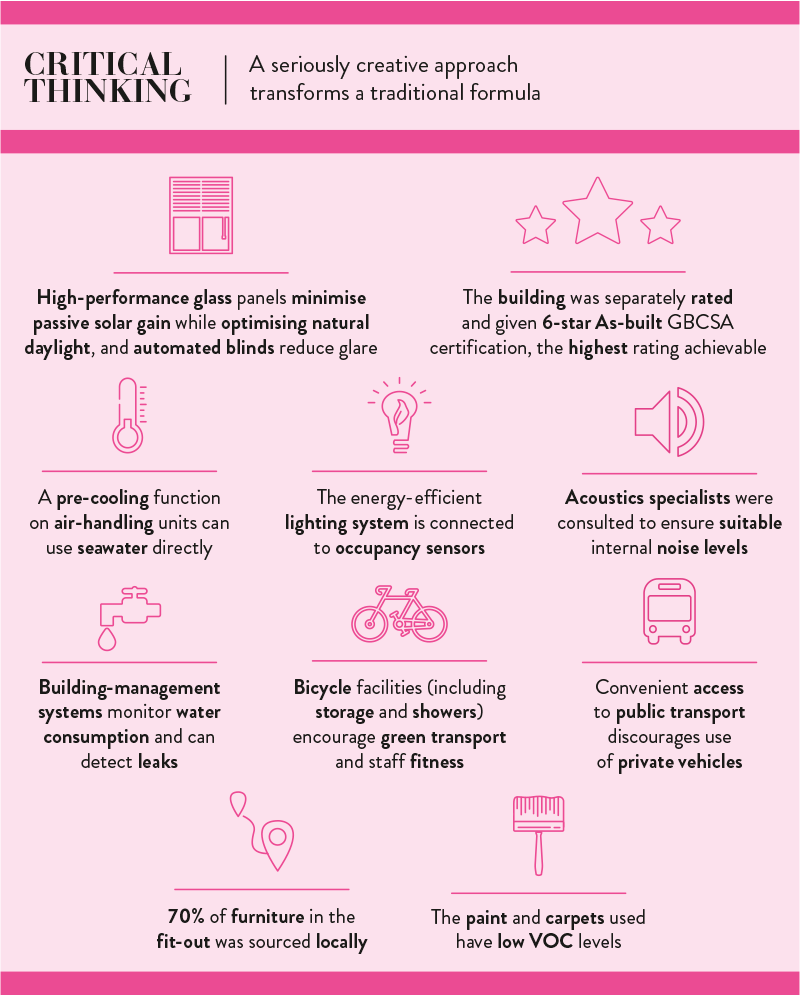 ‘We had to save almost 2 000 m2 of space in the move and still accommodate all the people and functions required – and everything had to be done with sustainability in mind,’ says Lategan. To achieve this, they broke from the idea of the corner office, where partners enjoy more space and prime views. Instead, they are clustered at the core of the building in small offices, surrounded by an open-plan layout for the vast majority of workers, opening on to the light and that 360-degree view, with workpods, breakout spaces, meeting rooms and hot desks.

‘PwC has globally moved away from hierarchical practices,’ says Lategan. ‘And at Formist, we focus on space-efficient offices with predominantly glass walls, with technology being a key factor in making small spaces more efficient. Views and light are used in open-plan areas, filtering into the all-glass offices and meeting-room spaces. Staff can also break away to the restaurant on the top floor, and there’s a client entertainment area on the roof terrace. This way, everyone gets the best of everything.’ As an added fillip to deconstructing hierarchies and carrying the company into a collaborative, creative, sustainable future, the team sourced local suppliers and designers. ‘Having a team of clever designers and suppliers around the table always ensures a better end result,’ says Lategan. 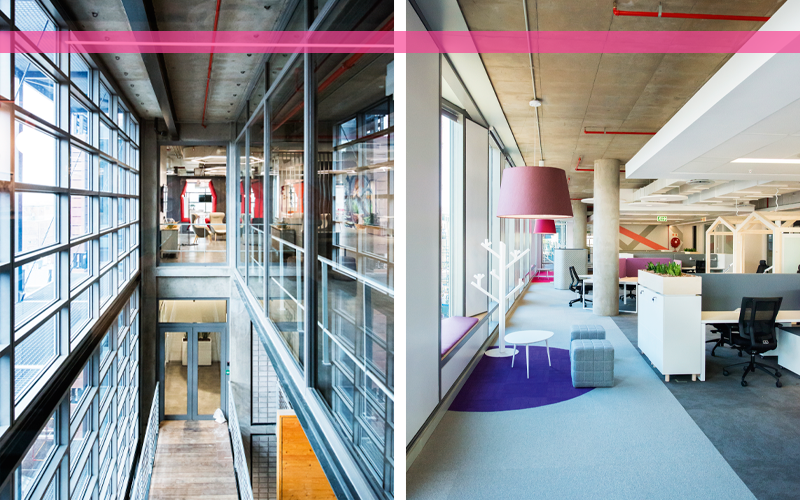 Two local street artists were commissioned to create murals. Marti Lund trained as a realistic oil painter but works mostly in collage, murals and graffiti art. He uses this to create stories and finds humour in juxtaposing images – here, elements from glamorous shops and seals on tyres. ‘The Waterfront is the intersection of two very different worlds: the man-made with commerce and industry, and raw nature beyond – the one very controlled, the other wild,’ he says. Falko One, on the other hand, got his start painting a high school wall in the late 1980s in his Mitchells Plain township, SA’s hub of the hip-hop movement he loved. He now travels the world, his trademark elephants and other animals, often in psychedelic hues, adorning informal homes and broken buildings.

The artists’ green leanings are perfect for PwC’s Silo No 5 fit-out, where, as Lategan says, ‘we spent great effort sourcing products that support green design and have sustainability’. Furniture designers on the project took shutter boards used in the concrete works of No 5 Silo and upcycled them to create room dividers for the offices. At the suggestion of Arup architect, lighting and sustainability consultant Carin de Beer, the team used reused timber as an alternative to Forest Stewardship Council-certified or low-formaldehyde emitting composite wood, which proved hard to source at a reasonable price. (‘It’s even better for the environment than responsibly sourced virgin timber, assuming it doesn’t have to travel too far,’ says De Beer.) One subcontractor even ended up using old floorboards from a demolished school to make some of the doors for the project. 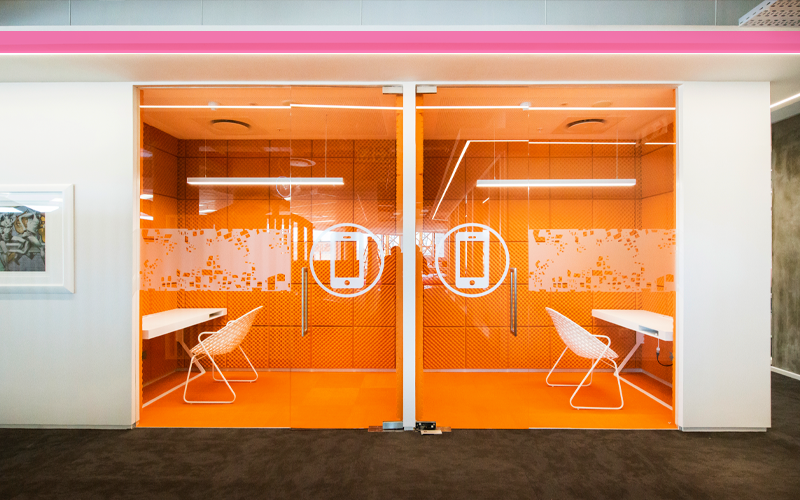 All task chairs were sourced from a supplier that has international recognition but does portions of the manufacturing and assembly locally – ‘they place focus on local employment as well as sustainable design’, says Lategan. ‘We also used foam panels that are green to aid the acoustic design for a healthier work environment, while adding great aesthetics. And we worked with local artists, who designed walkway screens from rope in certain areas. In other areas we used laser-cut boards to create interesting shapes for privacy but still have visibility and a flow of light and air.’

Emphasis was placed on bringing the outdoors inside, she adds – ‘on the use of plants, views, good air quality, great ergonomics and space planning that promotes movement and the use of different spaces, rather than workers being stuck unhealthily at their desks’.

In terms of colour, Formist maximised the fresh, new feel of the building by going with a Scandinavian-style palette, ‘with pops of brights representing the PwC brand’, and introduced white-washed oak to add warmth. ‘We wanted the interior to represent the culture and essence of Cape Town without detracting from the beauty that surrounds the building, from the harbour to the mountain. We wanted to thoroughly challenge the idea that the interior of an accounting firm has to be corporate and serious, and make it a creative, stimulating, fun environment you choose to be in.’

Their client loves it, reporting that productivity and overall staff morale has increased in the new space. ‘We’re excited by the move,’ according to Danie Fölscher, then partner in charge of PwC’s Western Cape region. ‘We now have one of the most energy-efficient buildings in Cape Town, saving energy costs and the environment. This is a place where our staff enjoy working but it goes beyond the office – it’s a whole new lifestyle.’

Jane Molony, executive director of PAMSA, on how paper and its  by-products are a... END_OF_DOCUMENT_TOKEN_TO_BE_REPLACED