When Coca-Cola Beverages Africa (CCBA) built its new head office in Port Elizabeth last year, it was to house a bottler that accounts for about 40% of all Coca-Cola volumes sold on the continent. That’s a lot of Coke, and a lot of clout. ‘The opening was part of creating a first-class working environment with a design that reflects the ambition of the company to refresh Africa every day, and make the continent a better place for all,’ says Wendy Thole-Muir, CCBA group head of corporate reputation and communication.

The building was created by Richter Architects for developers Jenz Heinberg to meet the growing needs of CCBA’s group office. The largely glass exterior is as clean-lined and streamlined as a Coke bottle, classic in its simplicity yet entirely modern; the central facade partly clad in wooden struts that give a sense of nature and warmth and support a graphic, a Coke-red map of Africa with a Coke bottle cut-out. This symbolic heart of the business lights up at night, shining out from the Waterfront Business Park in Humerail.

Transformation is also at the heart of the interiors that greet staff each day. CCBA began its operations in July 2016, created by a merger between the non-alcoholic, ready-to-drink bottling interests of the Coca-Cola Company (TCCC); the multinational brewing company SABMiller, a long-time major bottler of Coca-Cola; and Gutsche Family Investments (GFI). The influential Gutsche family has been widely associated with the bottling of soft drinks, as well as property, financial management and dairy farms. ‘The current shareholders of CCBA are TCCC, 66.5%, and GFI, 33.5%,’ says Thole-Muir.

CCBA was a new entity, looking for new ways of working – and the interior design architects they chose to facilitate this were dhk thinkspace, who have worked with some of the biggest and most influential corporate clients in the country, from Amazon to Absa, Cell C to Mercedes-Benz. ‘The brief for the CCBA building was based on the idea that CCBA wanted to change the way they worked, and we introduced activity-based working,’ says Adele van Zyl, dhk thinkspace director. ‘They wanted more engagement and collaboration between teams, better employee well-being and a productive, dynamic environment that would attract and retain key staff.’ The dhk thinkspace team approached this from an ‘educate and facilitate’ point of view, she says. ‘We spent a lot of time with the execs to understand exactly what they were trying to achieve, and with the employees to understand exactly how they work, so we could create an environment that suits their many roles and activities. We held workshops with each of the functions to discuss their individual requirements based on their unique roles in the company, and translated this into a layout that was open and friendly, while also providing the correct level of privacy and focus space.’ 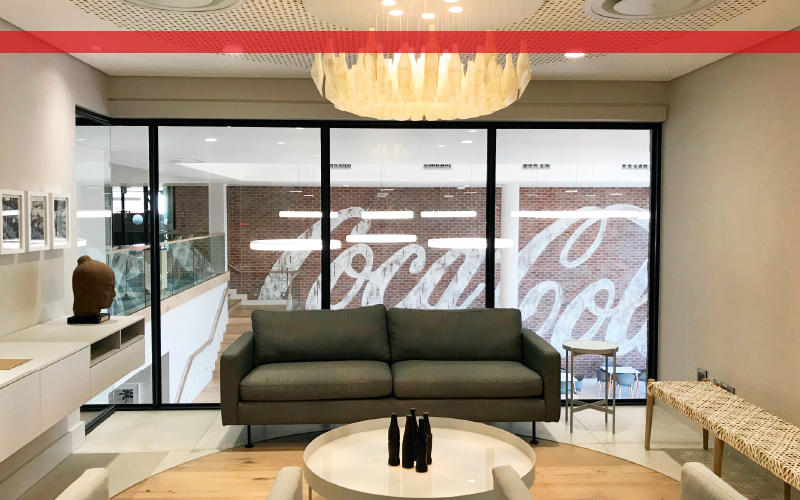 You can see this in the space through the use of ‘phone booths’ (small, closed rooms with leaning benches aimed at short-term use for private phone calls), ‘quiet rooms’ (ideal for an informal meeting, or as spaces for individuals to do some focus work for an hour or two), and acoustic feature panels that create privacy and a level of absorption, instead of solid walls that block out the light. ‘All these elements proved essential in easing the change for employees from a very cellular environment to a more open, engaging one,’ says Van Zyl.

When it came to branding, it was important to think outside the box. So while the Coke red is in the colour mix, it features only as an occasional accent – an art piece here, a light fitting there. And the only signage is a massive ‘Coca-Cola’ graffitied across the natural brick wall of the central meeting and restaurant atrium, its vast dimensions making it more of an abstract art piece. ‘In terms of aesthetics, using the Coca-Cola brand was paramount in design decisions, but there’s a subtle balance between using the brand and providing a level of neutrality to ensure the brand sings in the right places, instead of being overwhelmingly present,’ says Van Zyl. 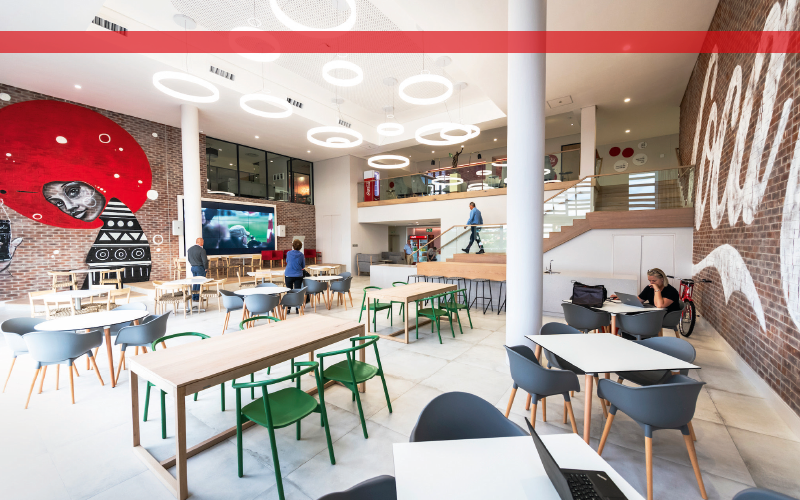 Texture was a big consideration in the selection of finishes for the fitout, which can be seen from the mix of concrete tiles and timber flooring, right up to the ceilings, perforated with a circular detail that mimics the fizz of Coca-Cola, and the exposed brick walls between, covered in graffiti by PE street artist Joff, aka Steven Carter. ‘They wanted images that capture an African feel, linking my style of work into characters who are relatable and inspiring in a work space,’ says Carter. ‘They also wanted the artworks and brand- ing to seem aged, signifying the long history of the company.’

There are two main paintings, one of a woman pausing to drink from a traditional Coke bottle. ‘Along with the use of the painting’s height, I used bold shapes and pattern work to give her a big presence in the room – a big, bold character calmly taking a break with a Coke. Her colour choice links to the company’s corporate image and the pattern work of traditional African artworks.’ The second painting is of a man, also drinking a Coke. ‘Using Coca-Cola branding elements, I was able to capture flow and balance between the different floors of the building along the staircase,’ says Carter. ‘Knowing the viewers of the painting would be in close proximity to it, I added more details and fewer big, bold shapes.’ 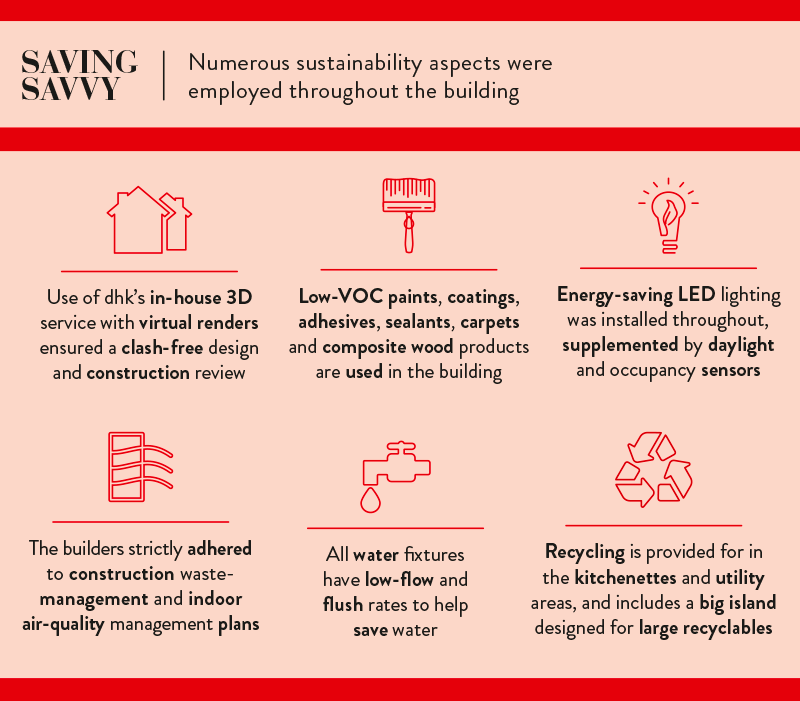 The biggest challenge, he says, was the size of the walls and the technique he used to allow the brick to show underneath. ‘I wasn’t able to make any mistakes as I wouldn’t be able to go back and paint over them [because] the whole effect of allowing the brick colour to show through would be lost. I had to plan carefully and first sketch out the murals in chalk.’

The interior architects faced their own hurdles. ‘We always find the largest challenge is getting employee engagement and excitement going when a company is facing a large change, such as moving from a cellular environment into an open, activity-based working design,’ says Van Zyl. ‘We approached this change management with constant communication with the staff to engender excitement and anticipation.’ 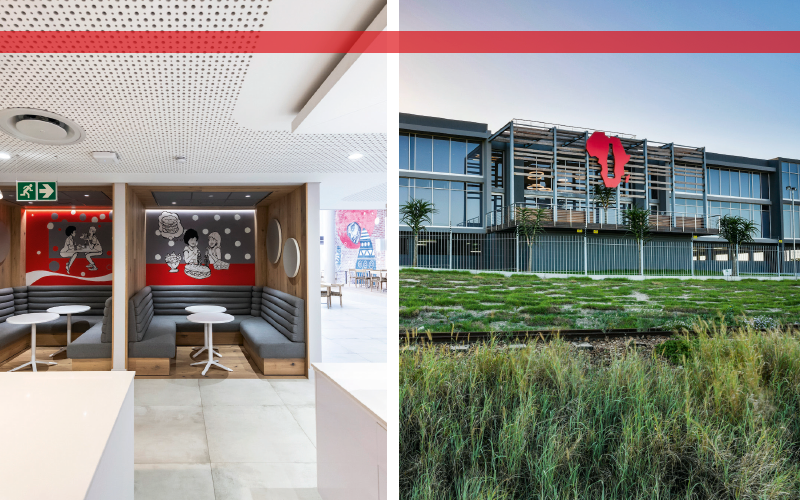 Less challenging was introducing sustainability features to the design. This is fundamental to dhk thinkspace’s approach, from project inception to final delivery. And, while showing leadership in the area of sustainability in architecture with a number of accolades and certified Green Star SA ratings, dhk thinkspace encourages passive design, ‘green’ technologies, energy and water savings, and sustainable materials as a basis for the design of every project, says Van Zyl, however big or small.

‘Given that the Coca-Cola Company, together with its bottling partners, have made a commitment to help solve the plastic pollution problem devastating the planet through its global World Without Waste initiative, sustainable business practices are very much part of the CCBA vision and ethos,’ says Thole-Muir. The company’s website notes that ‘it’s clear that the sheer volume of plastic pollution has become unsustainable’. It commits to a ‘shared vision’ of making ‘a positive difference for the customers and communities we serve’ and, given that care for the environment is part of that, it outlines a number of practical steps CCBA is taking to achieve this goal. 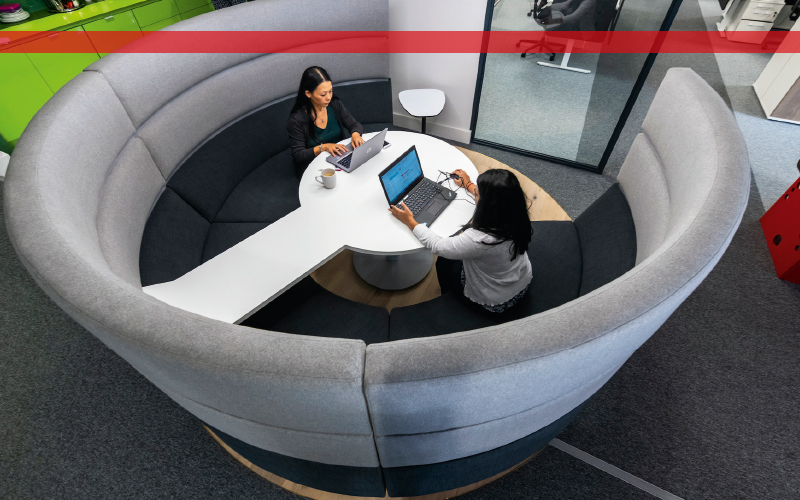 ‘The sustainability aspects of this building can be found in features like the waste separation stations as well as the LED lighting used throughout the space,’ says Thole-Muir. ‘And all lights are operated by motion sensors to ensure the whole building isn’t turned on when it’s not being used. There is also a shutdown for the HVAC system at a certain time each day, to make sure air cons aren’t left running all night. And all materials specified were in line with green building regulations.’

In a project of this nature, however, it’s still the branding, subtle as it is, that visitors carry with them when they leave – and that’s as it should be. ‘We have plenty of favourite features in this design,’ says Van Zyl. ‘But if we had to choose one, it would probably come down to the reception desk and feature wall design.’ Constructed of high-gloss panels with circular cut-outs that represent Coke’s distinctive fizz, the feature runs from behind the textured concrete reception desk, where it seamlessly extends up onto the ceiling, reaching all the way to the entrance door. ‘It’s a bold feature as you walk into the space that silently screams Coca-Cola.’