Strategically located along the N1 highway, in Johannesburg’s Woodmead North Office Park, Oracle South Africa’s new headquarters is a study in visionary design and futuristic functionality. The initial experience is one of elegance and drama – from the eye-catching red archway covering the front entrance of the building to the stark black and white cladding and bold facades.

Inside, there’s nothing predictable or complacent about this office space, and every element is hard-working and well-considered. Core design ideas are centred on connectivity and innovation, imagining a future where people use office space only a few times a week, to check in, meet and collaborate in a comfortable yet invigorating environment using the best technology available.

It was key for the building to augment the suite of skills the multinational computer-technology corporation delivers to its global clients. As Derek Bose, Oracle senior director for SA and the SADC cluster, says, ‘we want to attract the best talent in the country, and the best talent demands a workspace that talks to them’. And, with the shift to mobile working, ‘this building is bespoke and custom-designed to allow for that kind of fluid, mobile working environment’. 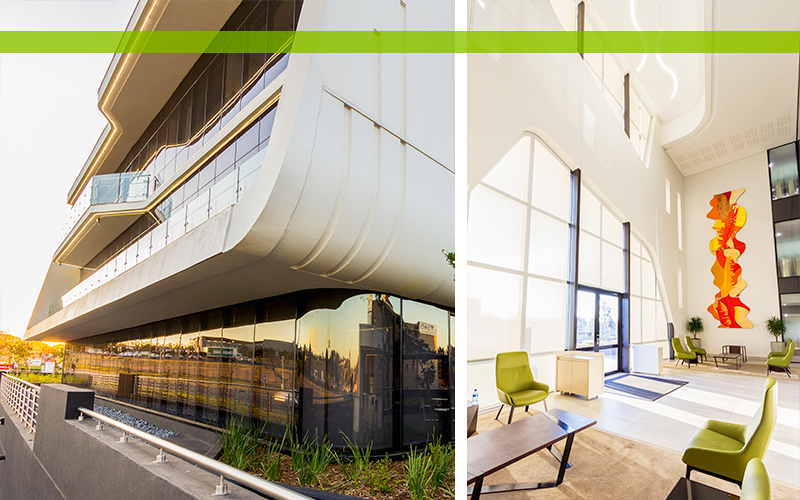 The landmark building dominates the busy Buccleuch interchange, taking the form of an elongated U-shaped mass with curvilinear underbelly, housing a two-storey office portion that visually floats above the glazed groundfloor business centre. Ricardo Pedro of Empowered Architects explains that the brief was to design an easily accessible green building that would foster inspired innovation. ‘We needed to create something that would represent Oracle in a built form as a world leader in communication and data handling,’ he says. ‘The idea was to simulate the look and feel of the now iconic curvilinear touchscreen smartphone, which best showcases connectivity in our rapid-moving, modern world.’

Employees were included in the design process from the beginning and all feedback was considered; from the amount of wall space needed for brainstorming sessions, to the ergonomics of furniture that encourages collaboration. Before COVID-19, about 200 staff members came into the office space daily, but this could top 300 as some were based remotely and came in irregularly, and others travel regularly to clients.

Owned by Zenprop, the building spans 4 332 m2 over three floors and includes basement parking and an open-aspect groundfloor, housing a reception area, a business centre that can be used on an hourly rental basis, and an upmarket bistro. The facility offers 210 on-site parking bays, a gym, wellness room and conference facilities. Fluid, open-plan office space allows for hot desks with two pause areas, telephone booths, collaboration spaces and meeting rooms.

‘Office floors were changed to access floors, to allow for cleaner, more accessible change and functionality of office space for present and future requirements,’ says Pedro. ‘For example, the office circulation core was effectively separated from the toilet core, halving the time employees spend out of office.’

The functionality of the Oracle building comes from doing things in a different way, questioning how the space is used and making facilities and specialised areas closer together and more accessible. ‘This new design approach to office space is a disruption to the current norm, and effectively questions the way we design office space, cores, toilets, pause areas and proportion of collaboration space to open office space,’ says Pedro. ‘By challenging the norm, we can test and prove that transformation is better and required.’

To encourage hospitality and offer an immersive space, Oracle commissioned students from the universities of Johannesburg and Pretoria to create artwork for the reception area and meeting rooms. In addition, artwork made from strings of the SA flag decorates each floor. The acoustic panelling in the restaurant, which doubles up as an open collaboration space, was assembled by the Johannesburg Society for the Blind. 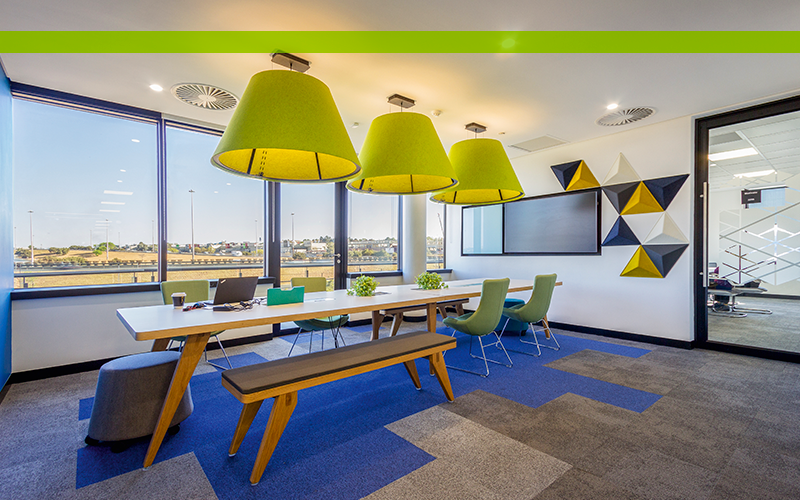 The lightweight concrete floor was created from exfoliated perlite, a smart-building material that is inorganic, non-combustible, odourless and durable, pH-neutral and boasts a very low carbon footprint. In addition, perlite has excellent insulating qualities, meaning long-term savings when it comes to energy consumption.

In keeping with the ethos of sustainable design, the building boasts a live display of the consumption levels of water, electricity and gas. ‘This serves as an advertisement to visitors and as a tool for building management to assess how consumables are being used in a sustainable manner,’ says Pedro. The HVAC is also controlled and temperatures are constantly measured. These are then tuned quarterly based on information gathered over time. 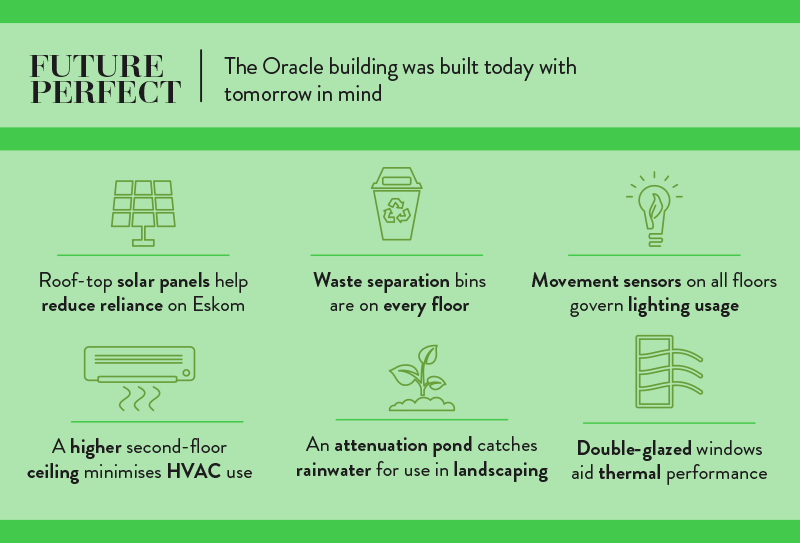 The base build design achieved a 4-star Green Star Office As Built v1.1 rating, but according to Alison Groves, regional director of building services at WSP Africa and GBCSA-accredited professional for the project, Oracle, as the building’s tenant, is applying for a 5-star Green Star Interiors rating. ‘This is worth noting,’ she says. ‘Achieving a 4-star Green Star Office Design rating is not unusual. However, as a forward-thinking company, Oracle wants to demonstrate its commitment to the Green Star accreditation concept by achieving a 5-star rating for the interior fit-out for which it is responsible.’ Achieving a 5-star rating is beneficial for the occupants of the building and will show Oracle’s commitment to the well-being of its staff and to the environment, she adds.

One of the most striking aspects of this undertaking was the treatment of the facades. ‘The building’s architectural orientation made use of the open, expansive north and south facades, using double glazing to allow for uninterrupted views and good thermal performance, says Groves. Punched windows in the longer east- and west-facing facades minimise direct glare and intense heat. ‘In addition, as the reception area faces west, automated blinds were installed to ensure comfort. These permeable blinds track the movement of the sun, and lift and lower accordingly, allowing for advanced thermal performance.’ 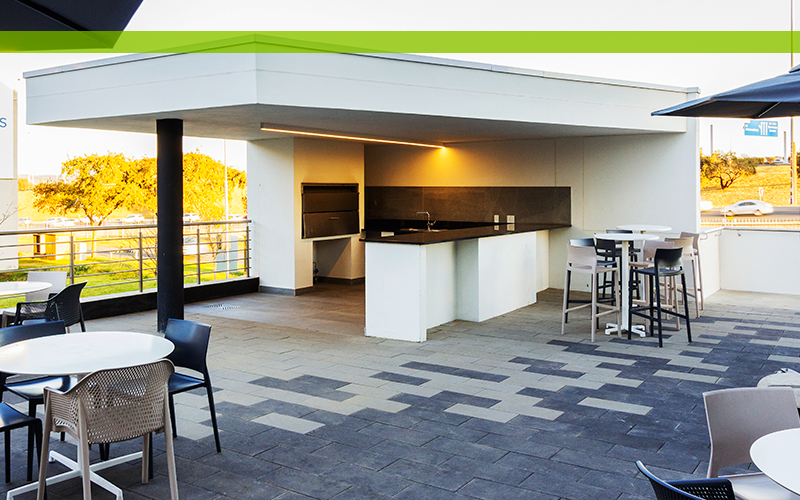 Groves also points to the variable refrigerant volume (VRV) system that serves the entire building. Bradley Komen of Graeme Page Consulting Engineers, who devised the VRV system for the building, says it was selected for ‘its heat recovery ability, allowing individual air-conditioning units on the same system to operate in both heating and cooling modes simultaneously. This greatly increases occupant comfort as they can more easily set their desired temperature without impacting the entire system. The heat recovery ability of the VRV system is also more energy efficient than those systems without it, another pro for the Green Star requirements’.

The VRV heat recovery system is an air-cooled direct expansion system with inverter heat recovery that utilises a three-pipe design in order to use less energy to recover heat. Komen further explains that the indoor units were positioned to allow for perimeter and internal zoning of the building. 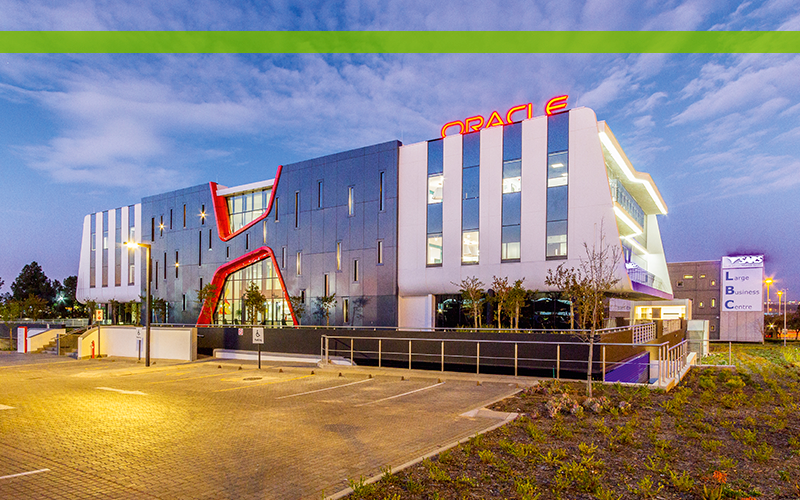 ‘This prevents over-cooling in generally cooler areas such as inner office spaces, or under-cooling in generally warmer zones, near the windows,’ he says. Fresh air for the building is introduced by a roof fan and processed through a large filter media bank to ensure the best-quality air is introduced. The fresh air for the building had to meet the Green Star requirements of 12.5 litres per second per person, giving a 66% improvement in fresh air over the SANS 10400 regulations. This helps to lower the CO2 build-up in the building and promote a healthier and more productive office environment overall.

For Pedro though, the positioning of the Oracle headquarters and its elongated form is the real standout aspect. At twilight, the building almost doubles as a sleek glass and plaster billboard, reflecting and enhancing the vibrant light show from cars on the freeway with its eco-friendly LED strip lights. It’s a fitting display of ingenuity for a multinational IT company with its focus firmly on the future.