It’s an enviably visible position: high up on the crest of La Lucia Ridge, edged by Umhlanga Rocks Drive and Douglas Saunders Drive to the north, and with an attractive conservation zone to the south-west.

Offering more than 11 000 m2 of office space, Milkwood commands its unique location – no wonder it has proven sought after as high-end office space. Construction was completed in 2016, and the buildings are now fully occupied, with high-profile clients such as MTN, Sanlam and Hellmann Logistics.

‘Due to its position and simple yet powerful presence, the building has become a bit of a landmark,’ says Paul Nel, the development’s principal design and project architect. What could have seemed an imposing slab of a structure is broken up by interesting architectural use of space, levels and landscaping, giving it a surprisingly light and accessible feel. 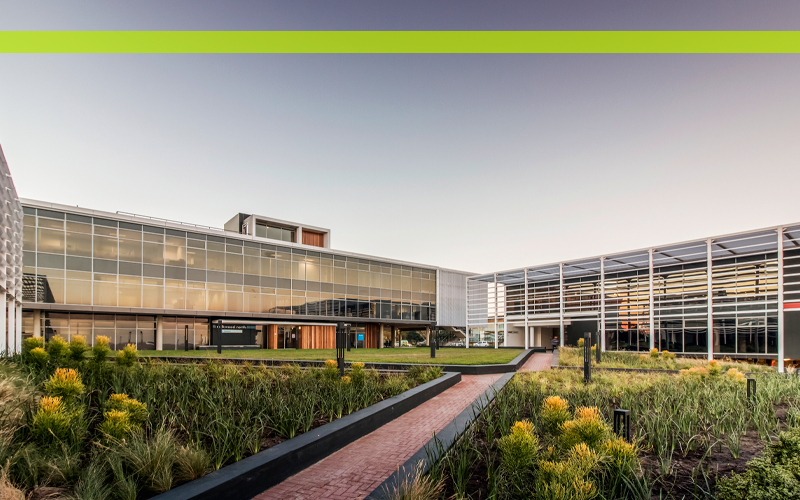 The office park consists of four separate multi-level buildings, all serviced by an enormous shared basement parking lot (more than 15 000 m2 – a ‘mega space’, as Nel puts it), which occupies a large underground portion of the site. The three main office blocks range between two and three storeys, giving the complex a varied height profile. The placement of the buildings is intended to create a ‘campus feel’, says Nel, allowing ‘both smaller and larger corporates to occupy the spaces and coexist’. The access ramps linking the buildings add further visual interest to the plan.

The design is intentionally flexible, allowing for changes in circumstance and function. The large, open floorplates, with a central service core, can be adjusted, accommodating future growth or unanticipated usage.

‘The buildings were designed prior to tenants being engaged and therefore it was important that the base-system design be flexible enough to allow any combination of use,’ says Nigel King, mechanical engineer and owner of Parsons and Lumsden Consulting Engineers, appointed to handle wet services, air conditioning and ventilation on the project.

‘From open-plan to cellular offices, boardrooms to call centres, the system needed to be able to accommodate the varying requirements within the tenant fit-out phase without compromising the base-system design.’

The development has an exceptional setting, overlooking a natural inner-city conservancy and commanding expansive, if distant, CBD and ocean views. Care has been taken to match the development to this sensitive environment – and take advantage of it. Planning guidelines set a limit on the height of the buildings, and this uniformity helps the development integrate with neighbouring residential areas. The selected construction materials also aid in this.

‘A simple palette of low-maintenance materials of white and neutral tones was used against the vivid greens of Durban’s indigenous vegetation,’ according to Nel. 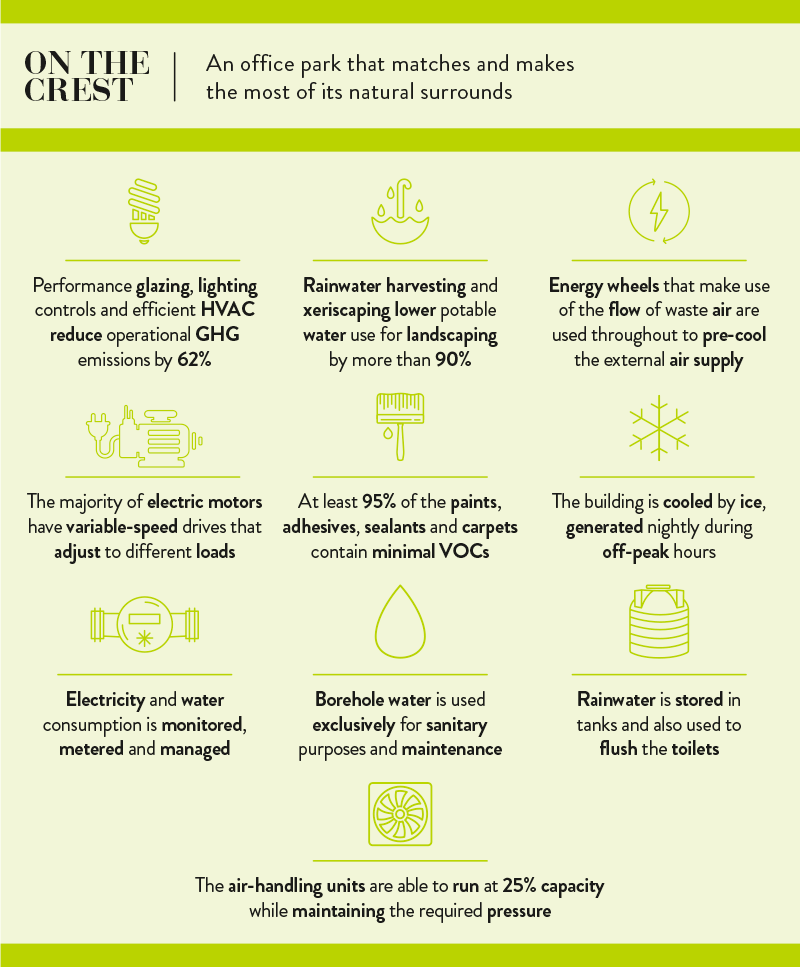 Those characteristic sub-tropical greens penetrate the workspace too, bringing a sense of nature indoors. The entire roof slab of the basement is planted with vegetation, and all four office blocks are grouped to look out onto an internal communal area of landscaping. The fourth block sits at a lower level to the others, offering refreshing views across its landscaped roof area.

The local climate demands that heat and ventilation are controlled within the working spaces while still allowing light to enter. Alert to energy conservation, the architects have made use of natural illumination where possible, with glazed curtain walling that enables sunlight to penetrate through all the levels of the offices, and across their open-plan spaces.

This technique extends into the underground parking lot. ‘Three of the buildings float above the basement, affording natural light and ventilation to the parking zone below,’ says Nel. Ventilation voids set into the vegetation-planted slabs allow air flow down to the parking level, and ‘the slab is further punctured by strategically placed light wells’.

In addition, the building is orientated to take advantage of the sunlight. The three main buildings are positioned on an east-west axis. ‘This allows the long facades of the building, which are south- and north-facing, to be fully glazed to take in the views and allow natural light to filter deep into the building,’ says Nel.

The southern facades are entirely glass, providing access to the long views of the city and the sea, while the northern facade, which offers inland vistas, is protected from the glare year round by a series of angled, horizontal aerofoil louvres. All the glazing features energy-efficient performance glass. The east and west facades, in contrast, contain small punctured openings fitted with sun ledges that ‘dramatically reduce and control heat gain’, says Nel. 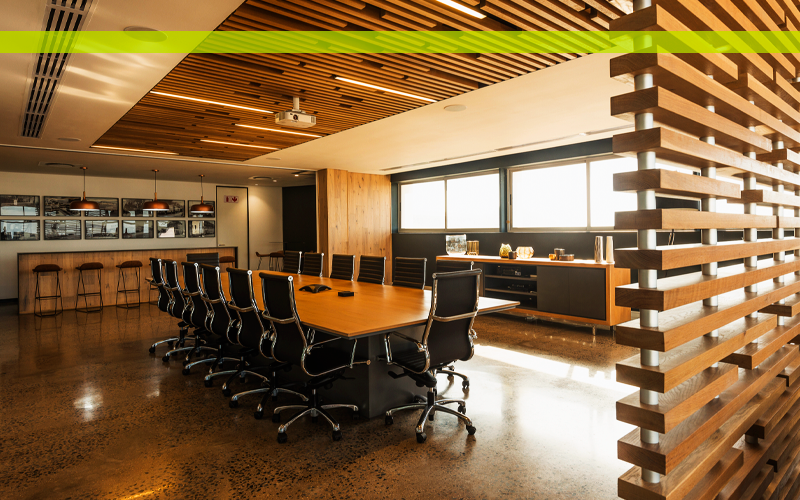 In all of these design choices, environmental sustainability was a key goal. The green principles of the project are thoughtful and considered. ‘At Paul Nel Architects, the belief is that following good design principles and being responsible in your choice of materials creates sustainable design – not only in terms of its impact on the environment but also the lifespan of buildings in terms of its occupants, and the life cycle of the building,’ says Nel.

For the engineering team, too, sustainability was a major part of the brief. It goes without saying, says King, ‘that this is a priority on any project and, in this case, we saw an opportunity to drive this in tandem with reducing capital cost’.

A key element was the implementation of an innovative air-conditioning system, designed around a thermal ice-storage system. ‘The chiller operates during the night – when electricity costs are at their lowest – and builds up a bank of ice,’ says King. ‘This ice is then used as the cooling medium during peak energy periods during the day to cool the building. This ensures that the chiller is not required during the periods when electricity demand and cost are at their highest.’

This design also allows for a chiller that is smaller than would normally be required for an office of this size. In fact, this particular HVAC set-up provides an unusual and satisfying example of the green ‘re-use, recycle’ ethos.

‘We had been involved with the same client on resolving a problem they had experienced on another development. The chillers installed exceeded the required capacity,’ says King. ‘The design cooling load of the Milkwood office park is 850 kW, while the available chiller from the other site had a 500 kW capacity. We were already planning to use ice storage on the project, and the potential to re-use what was essentially redundant capital equipment made both economic and ecological sense.’

Milkwood’s assisted ice-storage scheme was conveniently designed around the reclaimed 500 kW chiller. The system is tailored for streamlined efficiency. The central chilled-water plant room is located in the super basement that lies beneath all four buildings on the site. From here, variable-speed pumps supply each building. Fresh air is ducted from energy wheel units (which sit on each rooftop) down to the individual plant rooms that service each tenancy with dedicated air handlers. 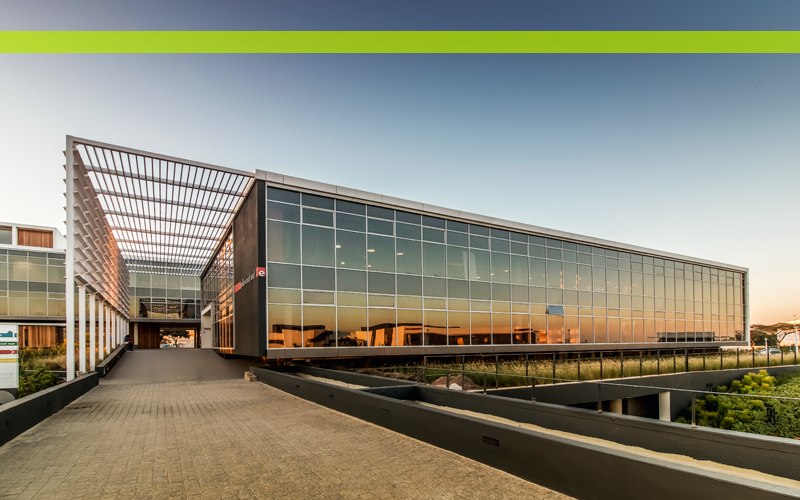 ‘These units run for as long as the building is occupied, ensuring that even when there is no cooling load, the building receives the correct fresh-air quantity,’ says King, adding that overall, the system ‘gives full control of water and air-side volumes’, allowing accurate metering and adjustment of temperature throughout the office space.

These efforts to maximise energy conservation have certainly paid off. In 2018 the Milkwood development was awarded a 4-star Green Star rating in the Office As-built v1 category by the GBCSA, scoring especially high for water use.

It seems the development has lived up to architect Nel’s vision of sustainability. ‘Green design should not be determined by ticking boxes in terms of legislation, but by creating holistic spaces and environments for the inhabitants to thrive, while respecting the place they occupy.’

Jane Molony, executive director of PAMSA, on how paper and its  by-products are a... END_OF_DOCUMENT_TOKEN_TO_BE_REPLACED