For nearly three decades, Mombo in the Okavango Delta has been a favourite repeat destination for wildlife-loving tourists. Perched on an island in Botswana’s Moremi Game Reserve, it’s the flagship camp of the Wilderness Safaris operation.

So in January this year, when the opening of a completely revamped Mombo camp was announced, it understandably caused a stir. As Williams-Wynn explains, the rebuild was ‘about taking the camp into the next 20 years’ – upgrading for the future, while keeping ties to the past. 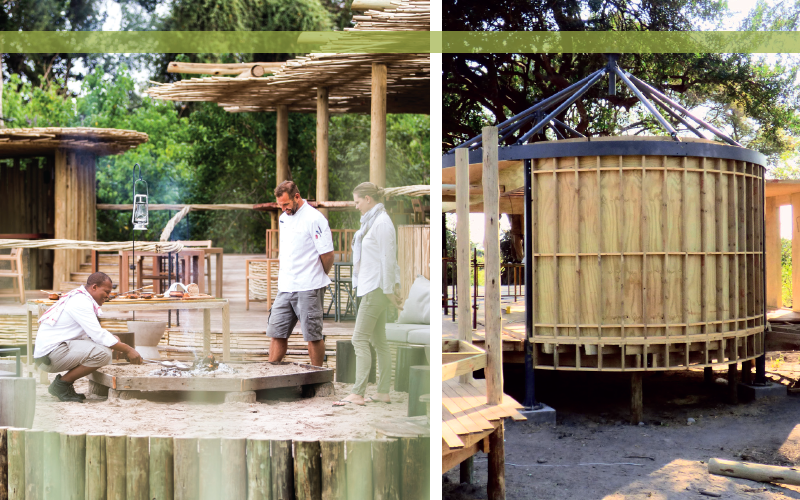 In every detail, a major emphasis was placed on sustainability and ‘responsible luxury’. Wilderness Safaris, which operates camps and safaris across eight African countries, from Botswana to the Seychelles, is part of Wilderness Holdings, a group of ecotourism companies that ‘endeavour to use responsible tourism to build sustainable conservation economies in Africa’.

Among other conservation efforts, they’ve played a key role in rhino relocation through the Botswana Rhino Reintroduction Project, which has successfully reintroduced a population of black and white rhino to the area.

The aim with the company’s tented wilderness camps is always to ‘build smart’, leaving as light a footprint as possible – especially vital in the fragile Okavango Delta ecosystem. A key goal is ‘striking a harmonious balance between the camps, the environment and the people who stay here’, says Kim Nixon, Wilderness Safaris Botswana MD. This applies to the construction processes as well as the structures that result. 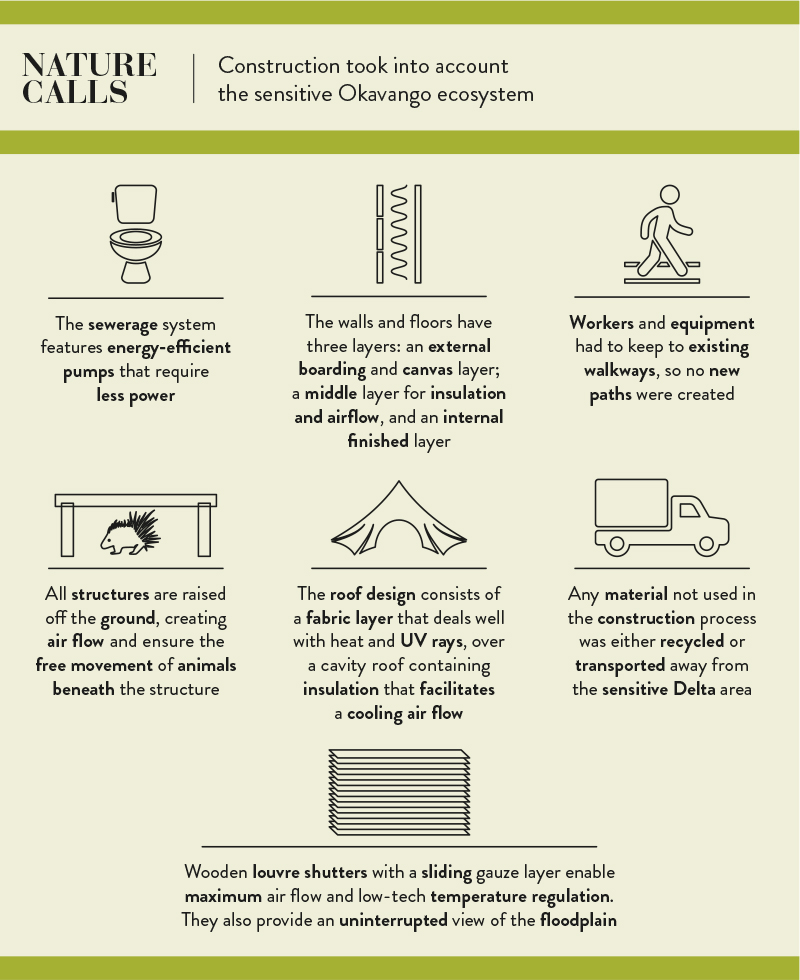 The greatest challenge was to achieve this harmony while maintaining the feel and traditions of the much-loved old Mombo. Naturally, the pressure was on not to meddle too much in a beloved institution. Despite the complete overhaul, the designers and architects strived to maintain the ethos and atmosphere of the old bush camp. ‘We had to make it completely different from its predecessor, while keeping it exactly the same,’ is how Nick Plewman, of Johannesburg based Nicholas Plewman Architects, describes the tricky balancing act.

Plewman has two decades’ worth of experience working in remote and environmentally sensitive locations, having designed some of Africa’s premier safari camps and lodges. His company ethos emphasises ‘uncompromising ecological responsibility’, respecting traditional style while focusing on energy neutrality and sustainable resourcing. ‘I’ve been lucky to be able to combine a lifelong passion for the bush with what I do, and I am hugely motivated to provide buildings that do more good than harm – no easy thing when doing nothing might be the best ecological solution in such sensitive environments,’ he says. 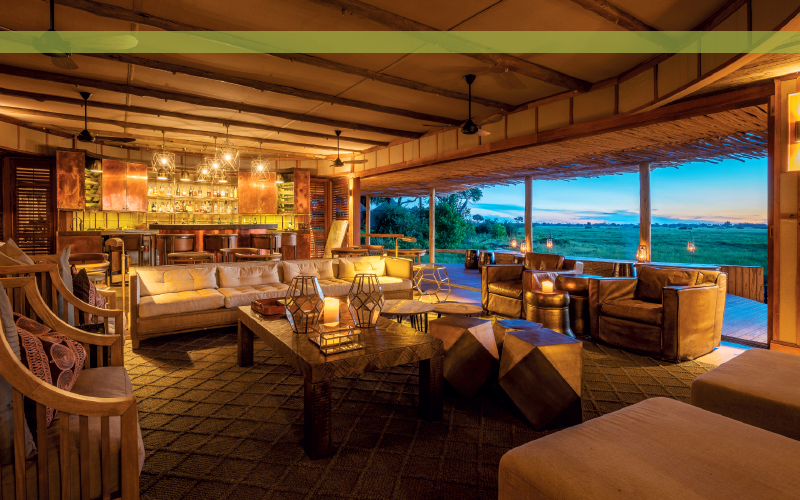 The interior design firm was also an excellent match for the project, in terms of their experience and environmental philosophy. Cape Town based Artichoke has been designing for the hospitality industry for two decades, creating award-winning lodges and tented camps all over the continent. ‘The site in which the facility is situated is critical to the content of the scheme,’ says Williams-Wynn. ‘We rely on inspiration gained during a site visit.’

Yet, even with all this collective experience, building in a remote corner of the Okavango Delta presented special restrictions and responsibilities. ‘There is a statutory requirement over and above the moral obligation to build in an extremely environmentally sensitive way,’ says Plewman. In addition to not being allowed to use concrete (other than for secure fuel storage), ‘the building must be basically biodegradable, if not fully demountable’. Indeed, at all its facilities, Wilderness Safaris aims for a camp ‘that can be dismantled and removed, leaving no trace of its previous presence’.

Cape Town based Tenthouse Structures was contracted to design and deliver 48 independent roof structures for Mombo: for the three hospitality areas, 12 standard accommodation units and a family villa. The tensile roof structures were ‘engineered out of multiple elliptical ring beams, welded and box-reinforced plasma-cut plates … integrated into a complicated system of multi-levelled walls, pergolas and screens’.

The aim was to use almost exactly the same physical footprint as the current Mombo. Each luxury tented room was demolished and neatly replaced with a new one built in precisely the same place. Any increase in coverage was mostly due to extending a pool deck out towards the floodplain. This ensured minimal ground disturbance, and preserved the existing vegetation – particularly the large, old trees standing between the units.

These trees, it emerged, presented an unforeseen problem. The existing tents were anchored to the ground with deeply planted gum poles. Over the years, these had become inextricably entwined with long-established root systems. Removing the poles risked doing fatal damage to these delicate organs. A tree expert was brought in to determine which poles could be safely removed.

The foundations for the new tents had to be placed with care around the poles that were left in place, and the remaining root structures were incorporated into the design where possible. The trees were otherwise cared for and professionally pruned – but only where necessary. ‘We did not cut a single root greater than 50 mm,’ says Nixon. 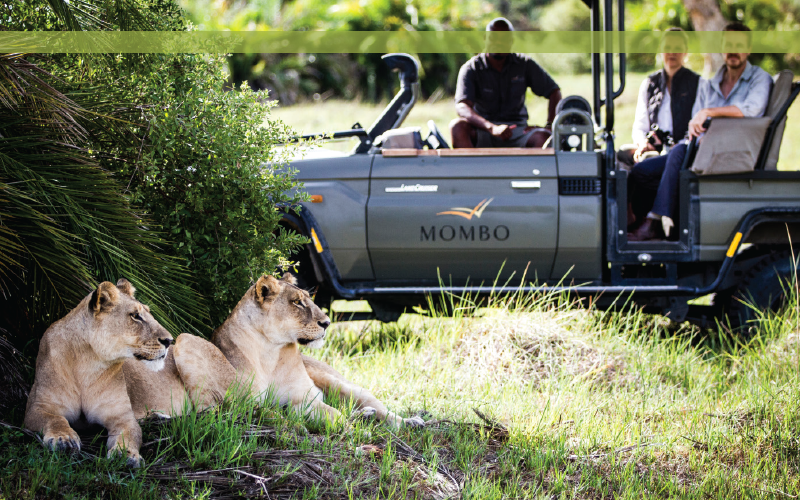 In keeping with Mombo’s conservationist ethos, all materials salvageable from the old camp were re-used in the new camp. The distinctive wooden doors were reinstalled as entrances in the tents, a nostalgic reminder of the old camp. Other wooden elements were imaginatively repurposed – for example, timber from old walkways and floors was used in wall panelling and counter tops. All the old gum poles and sliding doors were kept for re-use, either at Mombo or at other camps.

An added benefit of all this recycling is that returning visitors will recognise elements of the old Mombo in the new camp, retaining its familiar air of vintage luxury – with a few innovative twists. ‘Our contractors, Lodge Builders Botswana, were immensely tolerant of the whimsical detailing we applied to try and innovate new textures and finishes to what were, after all, very traditional materials,’ says Plewman.

While Mombo already had full solar power, used for everything from heating the geysers to pumping sewage, installing air conditioning would have required a far greater energy outlay. According to Plewman: ‘The development is many miles from resources and must necessarily be totally off grid, with a statutory requirement that even diesel generators can only be used as back-up – the primary power source must be renewable.’ 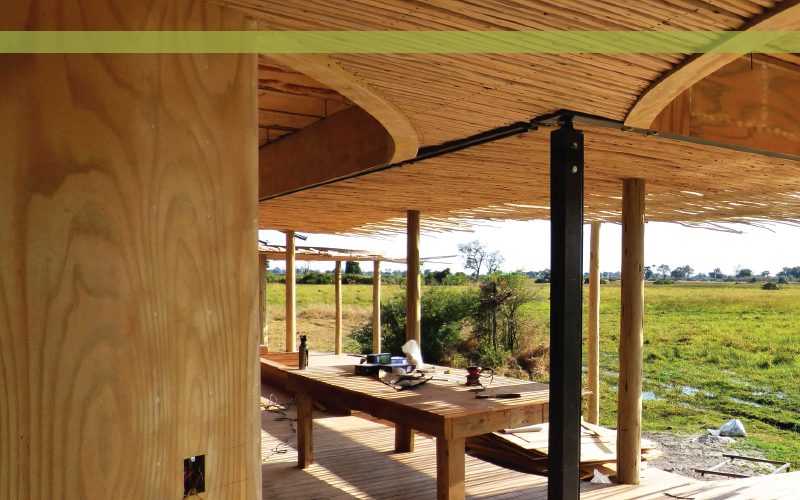 Given these severe energy limitations, it became critical to make buildings that were extremely thermally efficient. The decision was taken to find new, innovative, energy-saving techniques to regulate heat and cold, including natural insulation and air-flow construction techniques. In front of the rooms, the extended verandas are shaded and cooled with the use of pergolas.

Then there were challenges that even the most bush-seasoned developer could not have foreseen. ‘Building in a wilderness zone in the heart of the Okavango swamps has its own very particular challenges,’ says Plewman, wryly. ‘Building a timber structure against a very strict time deadline and waking each morning to find a substantial part of it had been trashed overnight by elephants – not just once, but again and again, required a certain fortitude.’

In the end, it seems the elephants gave their blessing to the project, which is now welcoming visitors to a new and even greener Delta experience – completely different, but exactly the same.