If you pass through Upington in the Northern Cape, on your way to the Augrabies Falls or the Kgalagadi Transfrontier Park, glints of light will certainly catch your eye at the corner of Nelson Mandela Drive and Park Street. Apart from the gleaming cars on sale at the Toyota dealership there, 360 shiny solar panels are angled on its roof. This impressive set-up is just one of the reasons the dealership won the 2017 Toyota Eco Dealer of the Year award, announced in March this year.

This is no small-town victory, given the global environmental impact of manufacturing and running vehicles. That said, those in the auto-motive industry are increasingly aware of this impact and are making an effort to reduce waste, increase resource recovery, and seek out natural energy sources to supplement the use of the Earth’s resources. Automotive corporations have set targets related to environmental responsibility that all must follow – from the makers to the dealers and service centres.

Toyota is one of the big brands making a mark in exploring cleaner technologies. It has had an Earth Charter in place since 1992 and is accelerating the development of hybrid, electric and hydrogen fuel-cell vehicles. It hasn’t stopped there. 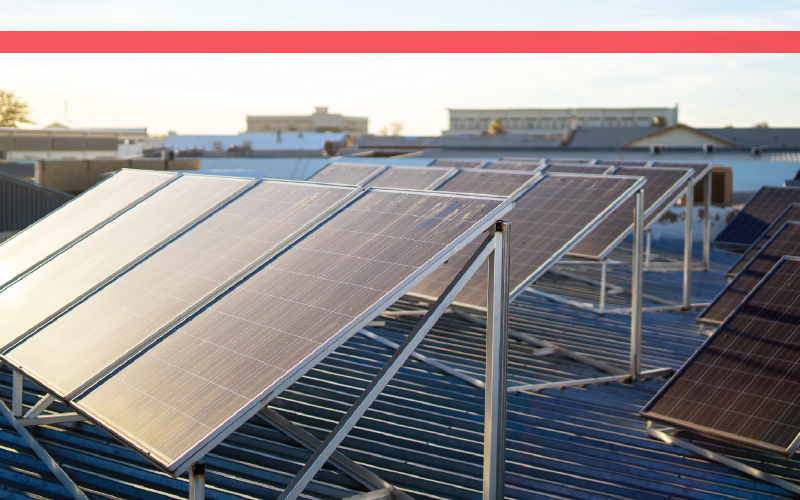 In 2015, the company announced the Toyota Environmental Challenge 2050, to go beyond a zero environmental impact and make a net positive impact. The challenge has six goals – from using low-CO2 tech and renewable energy to helping create a recycling-based society and increasing conservation efforts in areas surrounding Toyota premises. Suppliers and dealerships are all expected to commit to these environmental goals.

One dealership that did so the very year the goals were announced is Upington Toyota. Riël and Elsabé Gresse, the husband-and-wife team who heads up the business that’s been in the family for its 50 years of operation, started looking into using renewable energy back in 2008, although solar technology was too costly then.

‘In 2015, a combination of factors made it necessary and possible. Solar was more affordable and you could use it more for your benefit, with tax advantages and so on. At the same time, electricity hikes became too expensive,’ says Elsabé, an MBA graduate and former teacher who is the dealership’s financial director and the driving force behind making it greener.

The couple brought engineer Frank du Plessis and project manager Koos Brand on-board, and together they developed the brief and scope of work. Brand says the biggest challenge was the location, which limits supplier choice and makes logistics tricky. ‘Upington is fairly remote and resources had to come from Johannesburg, Bloemfontein and Cape Town. But the enthusiasm of the owners and project team towards the vision made it no effort,’ says Brand, who believes the team’s synergy contributed to them making the project such a success. 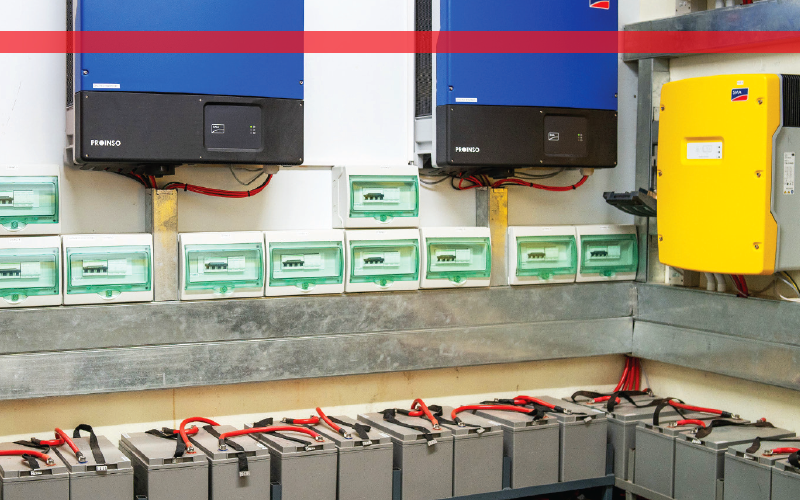 Upington’s sunny conditions make the Northern Cape town one of the best spots for solar in SA. It is home to Khi Solar One, Africa’s first concentrated solar power plant; as well as the Renewable Energy Centre of Excellence at the local FET college.

At the main dealership, 540 m² of solar panels generate 75 kWh of power, so the dealership operates off-grid most days. The challenge in setting up the system was ensuring seamless installation and implementation, says Brand. ‘In a car dealership, you have to supply seamless primary power to all aspects of the business. The dealership and all its secondary services like finance, insurance, stock ordering, the workshop and communication systems, rely on consistent power supply. Should you have interrupted power supply, it could affect the success sale of a car,’ says Brand. You wouldn’t want the lack of air con on a very hot day to make potential buyers uncomfortable on the shop floor, for instance.

Many overtime hours were spent on installing the solar system seamlessly, so as not to disturb the running of the business. A high-tech electronics system allows for the transfer between the renewable and grid energy systems, in the late afternoon and again in the morning.

The system is impressive but not perfect, admits Gresse. ‘Our biggest problem is battery technology. It’s expensive and the technology is still in development, so we didn’t invest much in batteries.’

This means at night, the dealership goes back to electricity. And while the solar panels generate excess energy over quiet weekends, she says ‘at the moment, the municipality won’t allow us to supply excess back to the grid’. This is a pity, as it’s believed they could generate enough power for 20 houses.

Apart from solar, significant changes were made to the lighting and cooling of the premises, as well as the way the service centre deals with waste. ‘We almost halved the number of lights we used by taking out every second light. We replaced those left with LED lights,’ says Gresse. The discarded fluorescent lights were donated to a local school.

Since ambient temperatures can hit the mid-40s in summer, the dealership’s air-con system used a lot of power, so more energy-efficient air cons were installed. A better waste-implementation plan was essential for the service centre, which generates the most waste.

According to Gresse, the lack of local support in this regard also sets some limits on what they can achieve. ‘The municipality is not into recycling in Upington. We divide our waste but a lot of it still goes into the general waste. We do have specialist collections but, for instance, it isn’t feasible to recycle glass here because it’s too expensive to take it to the recycling centre. Fortunately, we don’t use much glass. And unfortunately, our plastic removal company is under new ownership, so we’re struggling to get the plastic properly removed from site. That’s the problem of a small town – there’s only one supplier. But the whole idea is to reduce waste, which we’ve done.’

The company services about 50 cars a day, and Toyota South Africa has strict compliance rules regarding used fluids, brake pads and the like.

OilKol collects an estimated 1 000 litres per week of used oil to be processed by a waste-management refinery. The company is the official collector for the ROSE (Recycling Oil Saves the Environment) Foundation, an NPO that manages hazardous used oil and related waste in an environmentally responsible manner. At the ROSE processing facility, the used oil is treated to remove harmful substances. The foundation then sells the reprocessed product as a substitute for the heavy fuel oil derived from crude oil. 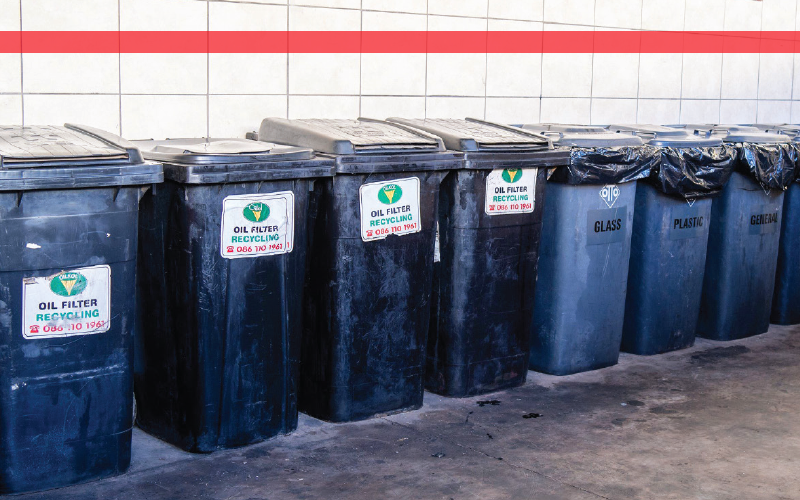 The project earned the dealership its ECO III certification, the highest possible for Toyota dealerships, as well as the brand’s eco award. The money invested made the desired 48-month payback time, says Brand, and the Gresses went on to install a similar system at Automark, their other Upington branch. But possibly the biggest reward has been the buy-in from the staff and response from the community.

‘This was the greatest hurdle because something like this can’t be driven by one person. Everyone must start dividing the waste at source and so on. So we did some environmental training to explain what we’d be doing − and why,’ says Gresse. ‘Once people understand, everyone wants to do their bit. Initially, a fine system was put in place to get the team to take the changes seriously. ‘If you don’t put the air con off, for example, you’ll be without it for two weeks. If you do it twice, you must give some money to a charity,’ she says.

This combination of education and forfeits worked, according to Gresse. The staff ‘take these lessons home – saving water and electricity and recycling there’.

Parts manager Bertus Burger, the on-site environmental officer, says: ‘In the beginning, it was an adjustment. It’s definitely a mind-shift. It took time to get everyone to use the recycling bins correctly. But, the fine system works … when you pick from people’s pockets, they listen.’ Burger has since made changes at home. ‘We went to buy recycling bins and now recycle our waste at home too.’ 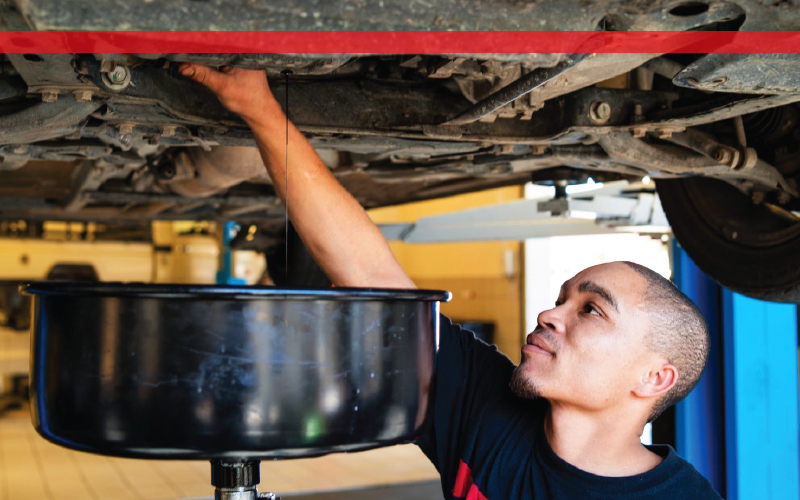 Dealer principal Riël believes being custodians of the dealership comes with a responsibility to the surrounding community and countryside. This was part of what motivated the project. His wife maintains the community responded positively to their efforts, and they remain committed to environmental awareness.

‘We do regular projects with the local schools. For instance, we recently had a safe-water project with a colouring-in competition, which had great buy-in from different local schools,’ she says.

Brand admires the Gresses’ passion for the planet. ‘In the case of Upington Toyota, the key success factor is the vision and the consistent commitment of the owners to be conscious of their footprint on the ecosystem. They understand it beyond the sale or service of a car… I regard this as the most important first technical step.’