As convivial co-owner George Petousis puts it with pride, ‘over the past 200 years the Vineyard has evolved into one of the most environmentally friendly, progressive hotels in Cape Town’. Its three park-like hectares on the banks of the Liesbeek river below Table Mountain were originally home to diarist and artist Lady Anne Barnard and her husband Andrew, colonial secretary to the governor of the Cape. Built in 1800, the Barnards’ home– the first English-style house in the Cape – eventually became a hotel.

When Petousis’ late parents, hoteliers Kitty and François Petousis, bought the property in 1980, it was largely to save it from planned subdivision into 33 plots. ‘My parents were passionate about heritage and about gardens,’ says Petousis. While their previous venture, the Townhouse, had been built from scratch, the Vineyard – like Oude Werf Hotel, which the Petousis group also owns, in Stellenbosch – became a loving restoration project, anchored in careful research and sustainability principles ahead of its time. 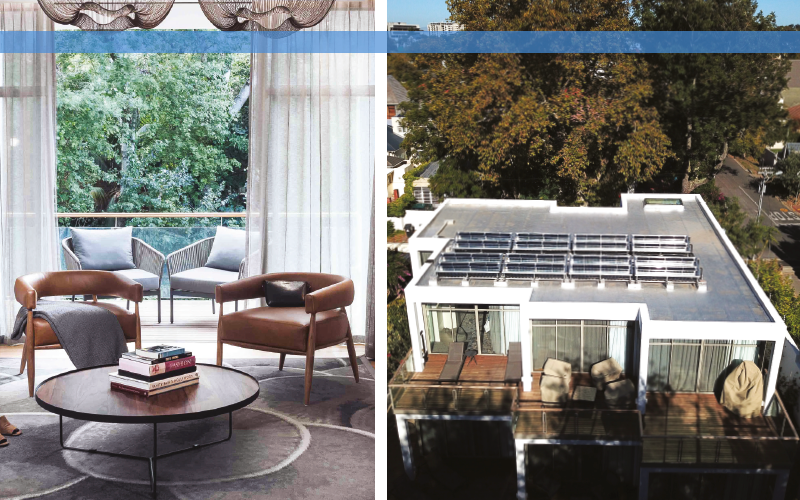 Petousis and his three siblings share their parents’ passions and, when they built a conference centre at the Vineyard 16 years ago, were eager to incorporate sustainability features from the ground up. That experience, he says, primed them for their latest and most ambitious project – the construction of three apartment-style suites for the many families and corporate clients wishing to spend longer in this green getaway in Newlands, where owls and eagles roost in riverine forest, and spotted genets and tortoises roam.

The family has bought several neighbouring properties over the years with expansion in mind, and their aim from the outset in building the Vineyard Hotel Suites at 4 Bucksburn Road was to achieve a 5-star rating from the GBCSA. The brief to the architects was to create three spacious self-catering suites with external areas to take in the garden surrounds and mountain views, says Nelia Bekker of Revel Fox, who took over the project from the late architect PJ Puttick. ‘The land is steeply sloped down to the Liesbeek, which presented a challenge. PJ’s solution was to create terraces cascading over three levels, one suite on each. Every suite has two big bedrooms, a living area and deck, and the front walls are glassed to let in the northern light and the views.’ 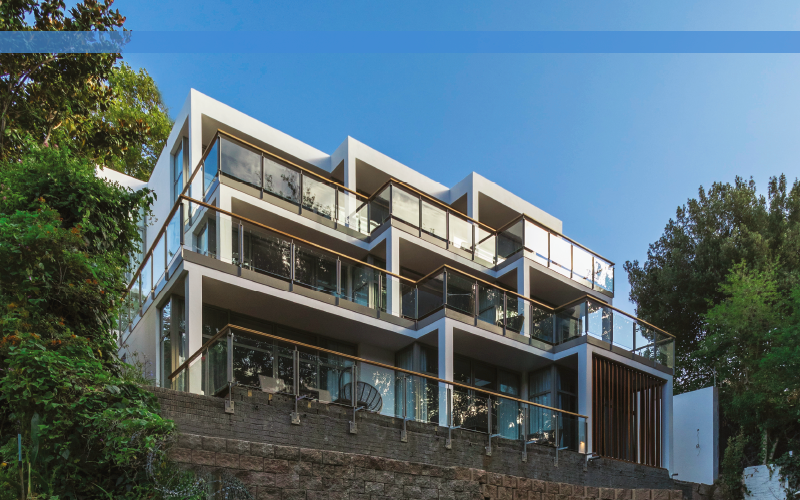 A small 1970s house on the property was demolished; the timber reused in the new project. ‘We recycle everything at our hotels, and this was no different,’ says Petousis. ‘We do all in our power to achieve a zero-carbon footprint.’ This project included installing double glazing for the large windows, which presented an unexpected dilemma. ‘We always source everything we can locally, from fresh produce to furnishings, but in this case we had to import from Germany,’ he says. ‘Sadly the double glazing that’s made locally isn’t 100% airtight – and we calculated the energy we’d save using the best would counter the carbon points of bringing it in.’ 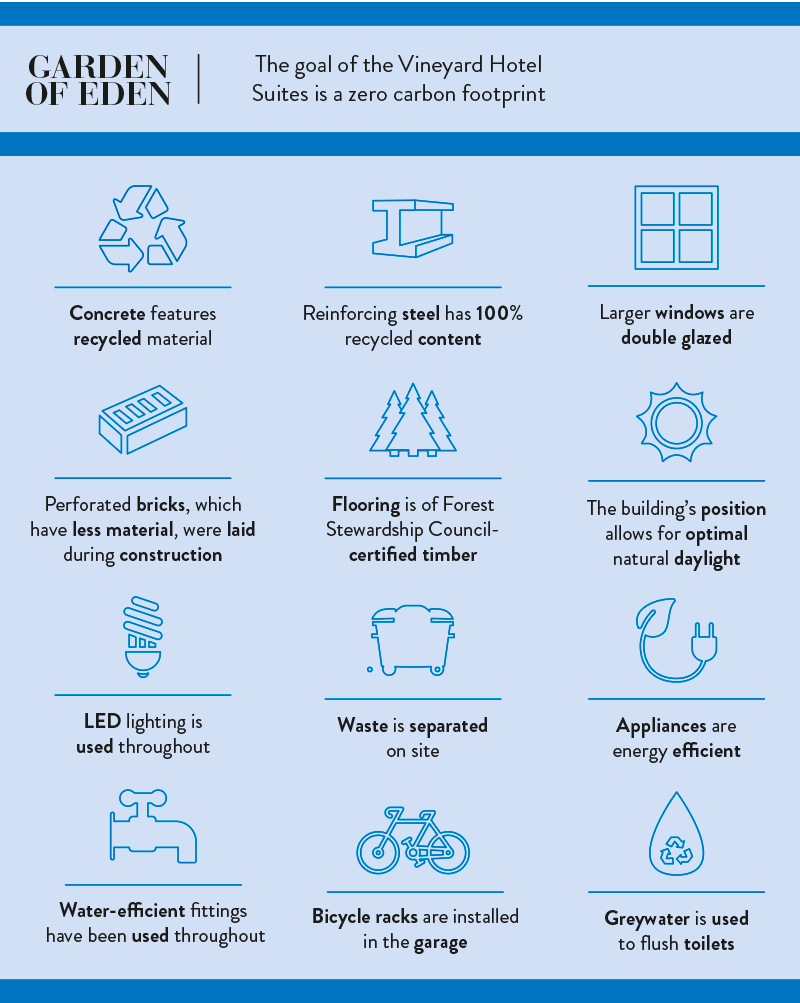 Energy was the first of four key areas that Petousis and the family hotel group’s sustainability manager, Chris van Zyl, addressed, working with sustainable building advisers André Harms and Catherine Luyt of Ecolution Consulting. They installed not only 80 PV panels to generate solar energy for the whole Vineyard property, but 68 novel hybrid panels that are both solar and thermal. ‘The Vineyard is one of the first places in the country to go with a Solarus photovoltaic thermal [PVT] system, which provides power and heats water in one unit – a saving on materials used,’ says Luyt. 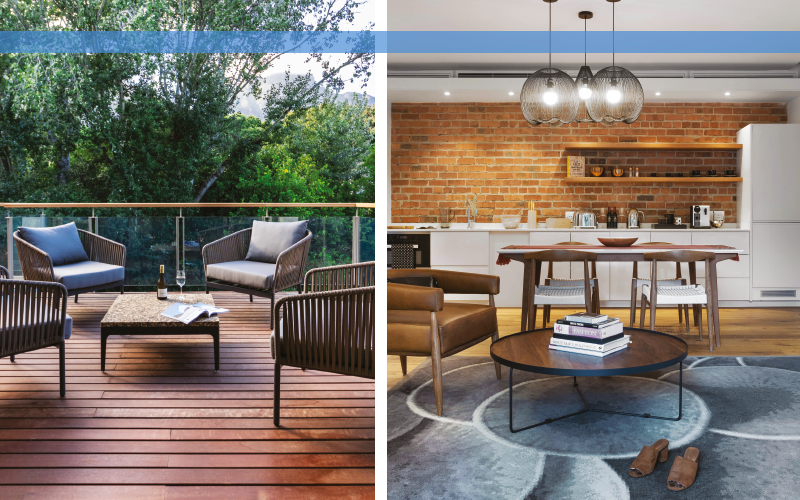 Petousis adds that they hope to go off grid in future, but that the current roof space makes PV a challenge. ‘Still, our guests are excited to stay in an apartment with a very low carbon footprint – and we encourage that thinking, giving them credit to offset their flights. You need to plant 41 trees for a flight from Europe to South Africa, for instance. We support tree-planting projects and match donations guests make.’

Protecting the property’s existing indigenous trees was a part of the project. ‘There was a young yellowwood where they wanted to build, and the architects designed around it and saved it,’ says the group’s garden designer, Franchesca Watson.

Waste was the third consideration, and whatever was produced in construction was recycled. ‘Today up to 92% of our waste at the hotel and apartments is recycled and monitored,’ according to Van Zyl. ‘Our food and garden waste for the hotel restaurants, where some apartment guests eat, all goes for composting off-site, and we buy back some of this for our own use in our garden. Items not readily recycled are used for upcycling, like wine corks, which are donated for making artwork.’

The fourth sustainability consideration, and the most apparent for guests, was the landscaping. ‘The Vineyard’s gardens have always been its biggest asset,’ says Petousis. ‘We naturally wanted that extended to the apartments.’ This task fell to Watson. ‘The hotel has a fine horticultural team,’ she says. ‘We focused on making this as seamless a continuation as possible of the main garden, using almost 100% indigenous plantings, focusing on species that don’t need huge amounts of light as there are so many trees. And we’ve continued to use a diversity of plants.’ 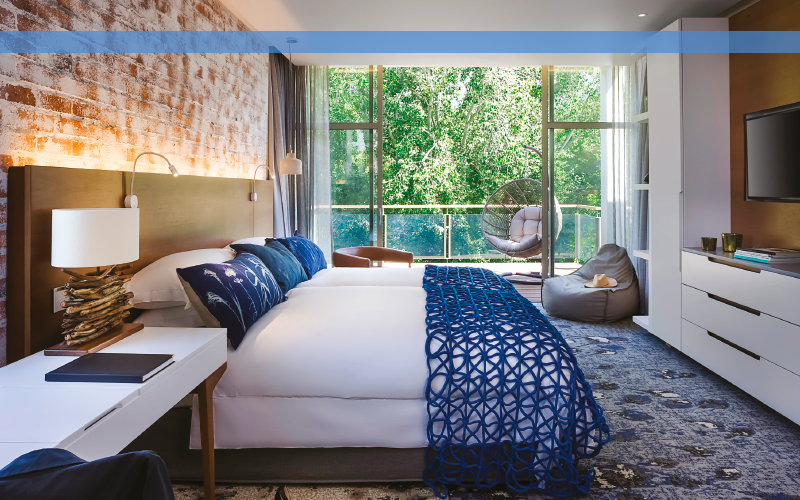 Diversity, after all, was a hallmark of the Vineyard’s original garden designer – the late, legendary Ann Sutton, who was brought in to develop the grounds when the Petousis family took over nearly 40 years ago. Sutton worked with what was already there in nature, and introduced indigenous riparian (river-bank) vegetation to stabilise the Liesbeek bank and help filter the water. She also planted a small vineyard – a tribute to the one that was there when Lady Anne Barnard was in residence, first planted in 1658, and now being revitalised after the recent drought. ‘Ann was an extraordinary woman – born hearing impaired – who studied horticulture in London during World War II,’ says architect and heritage planner David Gibbs. ‘She never allowed the amputation of her lower leg in her later years to get in the way of her extraordinary creativity and working life.’

Sutton pioneered contextual landscape architecture and planning, prioritising indigenous plant species and locally sourced construction materials. ‘She designed some of the most quietly awe-inspiring landscape gardens in the country,’ says Gibbs. ‘The gardens of the Vineyard Hotel are perhaps her most renowned work.’ And still growing.

By Glynis Horning
Images: The Vineyard