Bantry Hills could have been just another luxury development on the Atlantic Seaboard. But while its 61 apartments – arranged in two elegant contemporary buildings spread across an unusually large indigenously planted garden – offer the last word in comfortable living, they offer much more than that.

‘From the start we wanted to do something unique,’ says architect Andries Samuel of Fabian Architects. ‘This wasn’t just any piece of land – it had a history we wanted to honour.’ The original properties making up Erf 1225 Tramway Road were a coloured enclave, established in the late 19th century to provide labour for the Sea Point terminus of the Green Point and Sea Point Tramway Company. There were other residents too, notes Michele Paulse, in her doctoral thesis for historical studies (An Oral History of Tramway Road and Ilford Street, Sea Point, 1930s–2001). But by the late 1930s, ‘owing to the intensification of segregation and closure of the tramway terminus’, most had moved out. Tramway Road remained a coloured community until the National Party came to power, and the apartheid government launched forced removals under the Group Areas Act between 1957 and 1961. The Tramway residents, like those of District Six, were evicted and their homes demolished, the land reverting to the city.

Erf 1225 remained vacant and grew increasingly derelict until after democracy, when a number of the original residents instituted one of the country’s more successful restitution claims – and in 2001 the City of Cape Town gave it to those represented by the Tramway Road Trust. Some chose to receive a R17 000 payout from the Land Claims Commission, but a group of 34 opted to develop the land and get their compensation from the sale.

The first developers went bankrupt soon after excavating a massive underground parking area – vital in this old neighbourhood with narrow streets. And that’s when Bantry Hills, a consortium of private developers, and Fabian Architects stepped in. 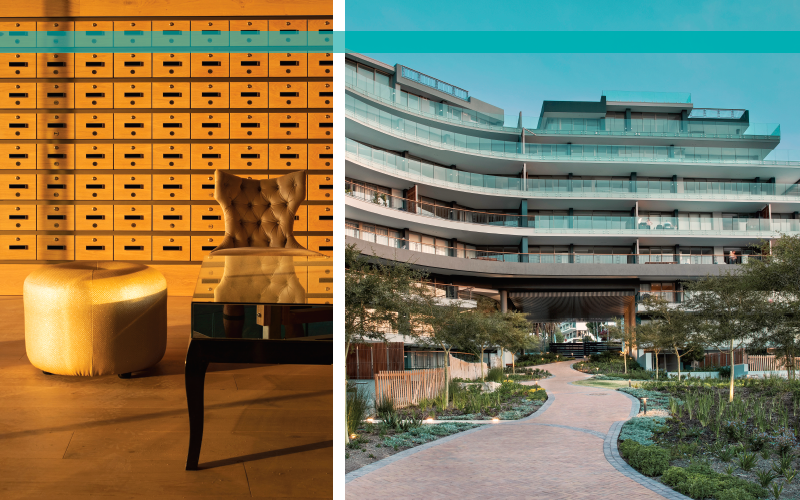 ‘It was important to us that we make this development unique and special because of its history, its considerable size – 7 540m² – and its great location between the mountain and the sea,’ Samuel says. ‘This was one of the few large open spaces available in an established urban area like Sea Point, which has mostly small properties. We decided to optimise that by keeping the building footprint small and building upwards to seven or eight stories. The land is sloped, so you don’t see all those stories, keeping it visually proportional to other properties in the area, and giving a sense of being connected to nature.’ 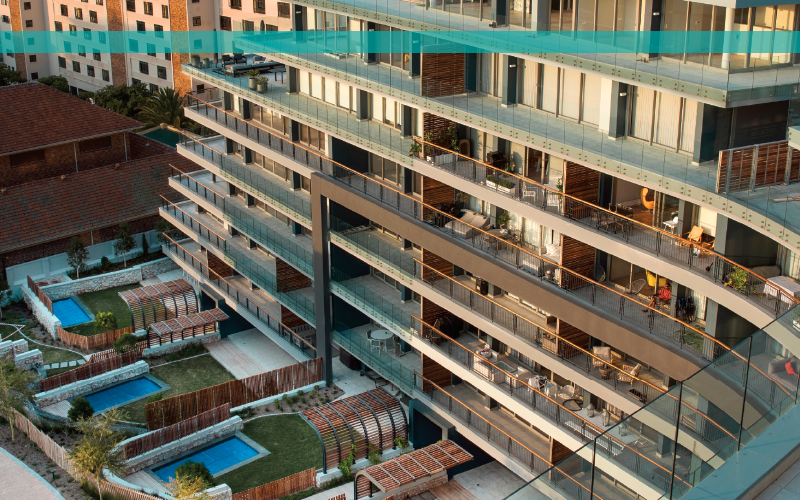 To help Bantry Hills sit comfortably within the architectural vernacular of Sea Point – a rich mix of modern styles from Art Deco onwards – Samuel designed a long, single sweep of buildings with clean lines and a curve, ‘rather like a Miami hotel or perhaps an ocean liner, something majestic’. They include a range of accommodation options, from one to two and three bedrooms, along with a row of slightly older-style duplex units he describes as ‘modern semis’. All are spacious and open plan with wide terraces – and plenty of parking. ‘In an area where parking is at a premium, there are three bays per unit, yet no cars are visible, thanks to that massive underground car park,’ he says.

This soon proved vital for another reason: halfway through the build, the drought struck. ‘To complete the project we needed lots of water, so we built a large holding tank down there,’ Samuel says. ‘It stores water caught on the flat roofs and large roof terraces of the complex. We’d always planned to have water harvesting – you need to retain your rainwater for a large development and return it to the city stormwater system. And this design included 13 small private pools as well as a bigger indoor one – three lanes of 20 metres – in the clubhouse we built as a meeting area for apartment owners. But when the drought kicked in, we moved it up a gear and added a borehole.’ 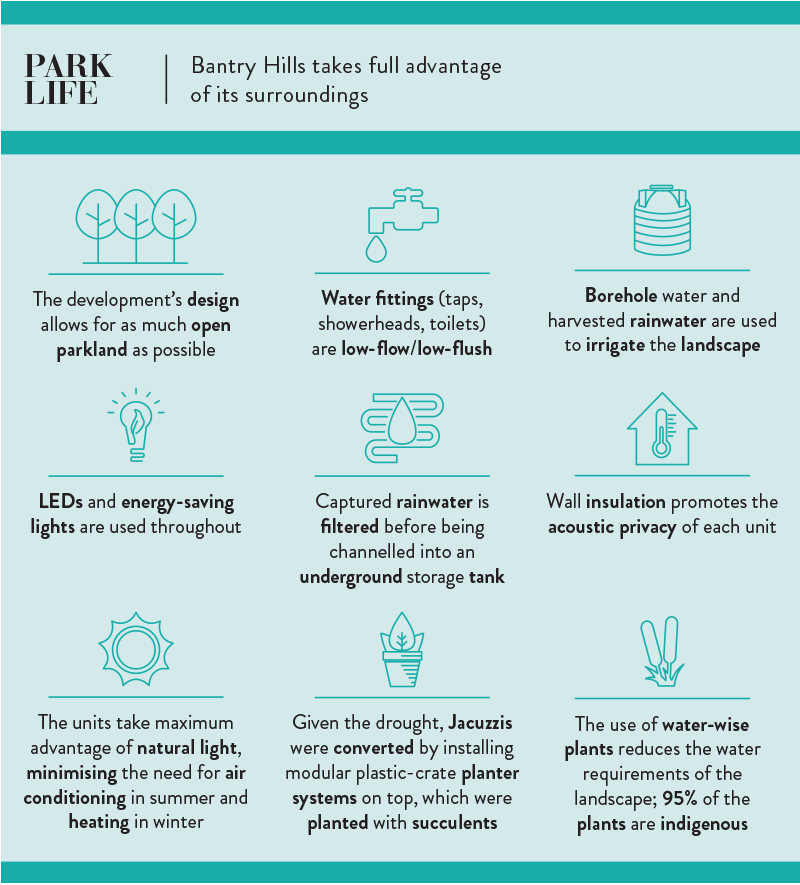 The borehole, however, brought problems for the landscape architects Samuel deemed crucial to the design. ‘Water restrictions were already in place when landscaping was meant to be installed,’ says Antoinette James, an associate at Planning Partners. ‘And after testing, the borehole water was found to contain high levels of salt and iron not appropriate for irrigation – it would create toxic soil conditions not sustainable for plants. A water-conditioning plant was then installed to filtrate the borehole water, which is first discharged into a large underground stormwater tank – placed so we could landscape over it – then circulated through the conditioning plant to irrigation tanks, so the irrigation for plants on this project is not dependent on a potable supply.’

Penthouse roof gardens were created to cool off and green the roofscape, and balcony planters and general planters were created for some apartments, where space allowed. Drip irrigation was installed in planters on the higher levels to avoid water wastage due to wind blow-off, while a peach-pip mulch was used to retain moisture and keep soil in place during windy conditions. 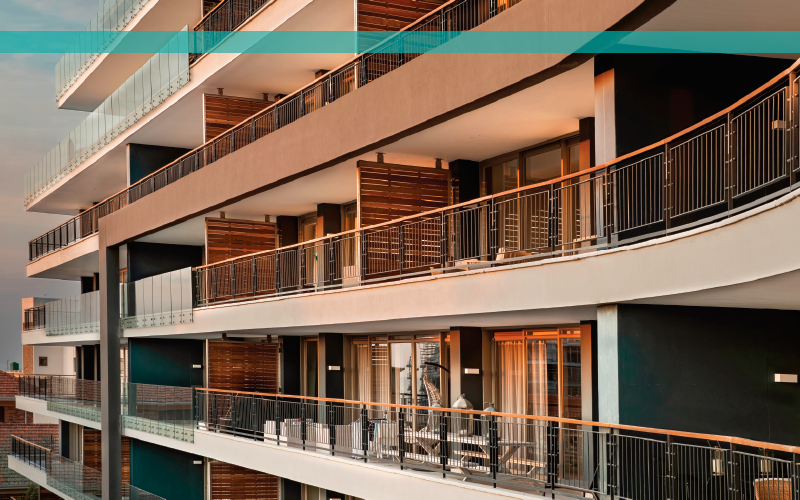 The central, communal-use garden is situated almost entirely on slab (the roof of the underground parking), greening an area that would otherwise have been a hard surface, due to careful planning by the team to allow for soil to be placed on top of the slab. The hardy fynkweek (Cynodon dactylon) lawn was planted as the communal lawn area on the section of slab where the deepest allowable soil depth was only 300 mm due to weight consideration on top of the structure.

The greatest landscaping challenge, however, was a registered servitude running from top to bottom in the middle of the site. ‘It posed a big problem for the proposed central axis avenue of trees, as no tree planting is allowed within a servitude – and this was our key landscape focal component. The tree line couldn’t be moved due to the basement parking on the one side, and major level changes and many services on the other. Special permission had to be obtained through a very detailed application process to the city for us to plant our double avenue of fever trees. ‘The landscaping on the basement roof slab – a communal garden – is a true example of greening on a roof to ensure a large garden area with seating and a children’s play area and lawn, which cools the central area of the development,’ says James. ‘The fever trees are a crucial feature due to their striking appearance and permeability: owners are able to see through them from the upper-level apartments to the communal gardens, the green heart of the development.’ 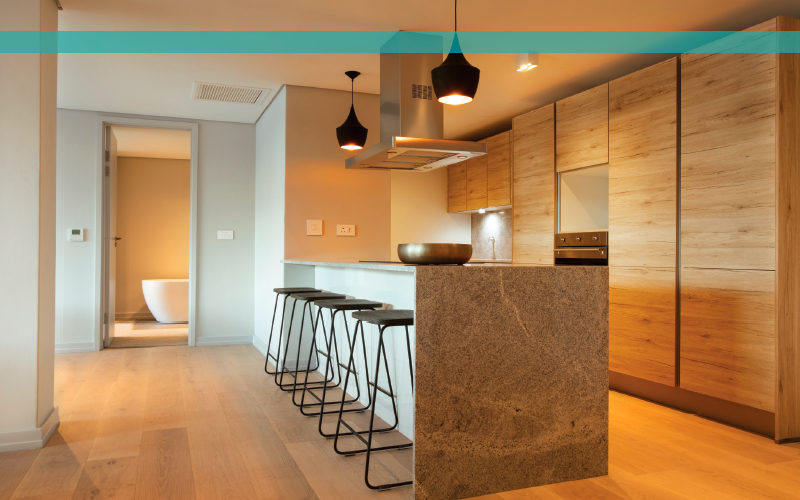 According to Samuel, ‘all creativity is problem-solving’ – and he should know. He is the son of writer and poet Antjie Krog (Country of My Skull) and, as well as practising architecture, writes poems in which architecture plays an important role. ‘Writing is less controlled and it regenerates,’ he says. ‘Architecture is harder edged, about logistics and people. But both are about an underlying structure you don’t always see, about interconnectedness, and about an underlying deeper level of understanding.’ 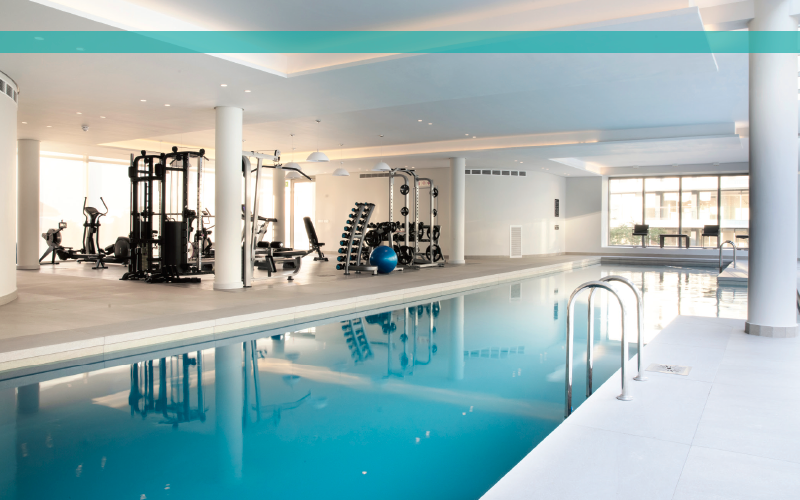 First prize, he concedes, would have been to build houses for the evicted inhabitants of Tramway Road to return to. ‘But that’s not possible, so we’ve tried to give them the best monetary compensation possible – and by creating a unique development. It’s rather like what’s happened in South Africa. In ’94 we were happy that human goals would finally be at the centre of everything. But 25 years later, we know we need to generate money to fix what was broken and move us all forward.’