The Mother City embraces many old buildings, and restoring and respectfully reinventing them demand special skills. Architecture firm dhk has honed these in a number of projects, most recently at the V&A Waterfront where the remnants of the Amsterdam Battery, erected in 1784 by the Dutch as a defence, were preserved while a landscaped park and piazza were created above a mass parking facility at the entrance to this prime tourist precinct.

The principles applied and lessons learnt are evident at 32 on Kloof. This is part of the former campus of United Tobacco Companies (UTC), which in 1904 began acquiring parts of what was then Nooitgedacht farm near the historic Company’s Garden. UTC erected a number of buildings for the manufacture and packaging of cigarettes and other tobacco products, and in 1922 the leading architects of the day, Parker & Forsyth, built 32 on Kloof to house UTC’s administration department.

Today these historic red-and-white masonry buildings, protected by Heritage Western Cape, lie at the entrance to what Growthpoint Properties is developing into a new precinct flanked by Kloof Street. Named ‘Longkloof’, it represents a R550 million investment in the city, designed to invigorate the area with new commercial and retail spaces, a 150-suite Canopy by Hilton hotel, and safe pedestrian routes linking it to the CBD.

‘The client’s brief was to transform the Longkloof precinct into a vibrant, accessible public space, but 32 on Kloof effectively concealed the precinct from the Kloof Street side,’ says Pierre Swanepoel, dhk lead architect for the precinct. ‘However, it presented an ideal opportunity to be a prestigious building fronting the main precinct behind and allowing an understanding of the type of architecture being developed in it.’ 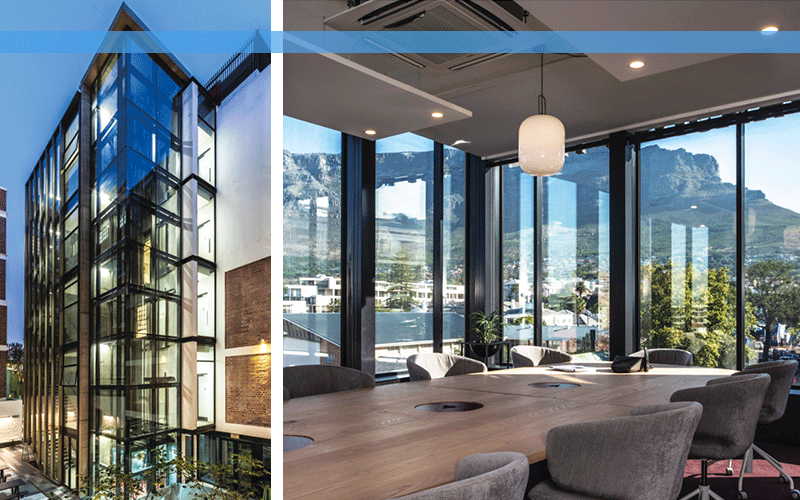 The brief was also to establish additional premium rentable space by adding two floors to the existing building; to demolish a two-storey 1990s structure in the courtyard to improve the light and views in both 32 on Kloof and the Longkloof Block A behind it; to maintain the rentable area and openness of the existing floorplates by minimising the impact of new lifts and escape stairs within them; and to reinvent the windowless basement to create premium rentable space. The challenge was to be sensitive to the building’s past in the process.

‘It’s essentially a plastered and painted building with decorative face-brick features – what’s disparagingly referred to as the “streaky bacon” style,’ says Henry Aikman of Aikman Associates, who prepared the application statement to Heritage Western Cape for a permit for the alternations and additions. ‘The main facade facing Kloof Street appears initially to be symmetrical, with a fairly grand central entrance flanked by face-brick pilasters and crowned with a triangular pediment, flanked on either side by six sliding sash windows on each floor, slightly larger on the ground floor,’ he says.

‘Then in 1999, when City Varsity College became tenants, the sloped tiled roof was awkwardly remodelled to provide loft accommodation, with oddly proportioned dormer windows. The rear facade was also compromised with a number of inappropriate alterations, including the introduction of steel-frame windows, and the erection of a two-storey classroom block alongside it.’ 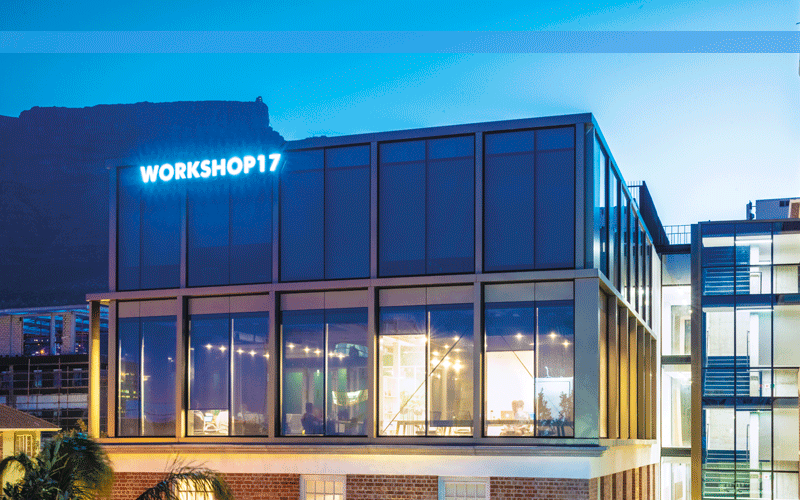 For Swanepoel and the dhk team, the first question was whether to design a new two-storey sloping mansard-type roof to replace the red-tiled roof – or a more contemporary box-light extension above the existing eaves line. ‘One of the strategies in working with an old building is not to try to mimic the original style and make a pastiche, but rather to celebrate it by making a clear distinction between it and the additions,’ says Swanepoel.

Once the client agreed to remove the existing roof with its awkward dormers, a two-storey minimalistic glass box was designed to be positioned on top of the eaves of the original building, flush with the walls below. This not only created more rentable area, but provided sweeping views over Table Mountain, Devil’s Peak and the City Bowl, and a stronger public face to the street.

The architects intentionally contrasted the contemporary addition with the existing building, playing off the order and rhythm of the brick-framed windows of the old, against deep, wide aluminium-clad fins in the lower storey of the new – ‘setting up an honest dialogue between heritage and contemporary elements, and forming a hybrid of architecture that enhances the building’s street presence’, as Swanepoel puts it.

‘Overall, the minimalist design of the extension refrains from competing with or distracting from the building’s heritage significance, ensuring that the total building mass and scale are sympathetic to its surroundings.

’To create maximum usable floor space, the old building’s interior sense of space was enhanced by demolishing certain interior walls. To increase the space even more across the floorplate, a contemporary glass-clad lift and stair core was erected outside the original footprint of the building, in a space created behind it by demolishing the 1990s annex. ‘Excavating the area to create a sunken courtyard aligned with the basement level added to the sense of oasis-like space,’ says Swanepoel.

Much like the fins of the new glass box, the glass lift and stair core act as a ‘stitching device’, he says, ‘contrasting but linking the old and the new, giving great views to those using the lift, and maximising the usability and quality of the rentable office area without taking value from the historic building’. A second free-standing external steel staircase was added later in the design process to fulfil safety requirements for the building tenants, ‘who required higher densities of people’, and the landings have become popular hangout spots.

The retaining walls in the basement facing the courtyard in the old building were partly demolished to accommodate a new glassed frontage, creating an ideal spot for the edgy Big Dog Café that has opened there, spilling out on to the courtyard paving, flanked by soft landscaping in raised planters.

Alongside the café lies the reception area of 32 on Kloof, and it’s here that the primary tenant, Workshop17 (which is partly owned by Growthpoint), and those using its flexible coworking spaces and hot-desking, access the building. They often grab a coffee before taking the stairs or lift up to the 30 private offices, nine meeting rooms, three boardrooms, seminar room, event space and bar, six lounges and libraries now housed here. 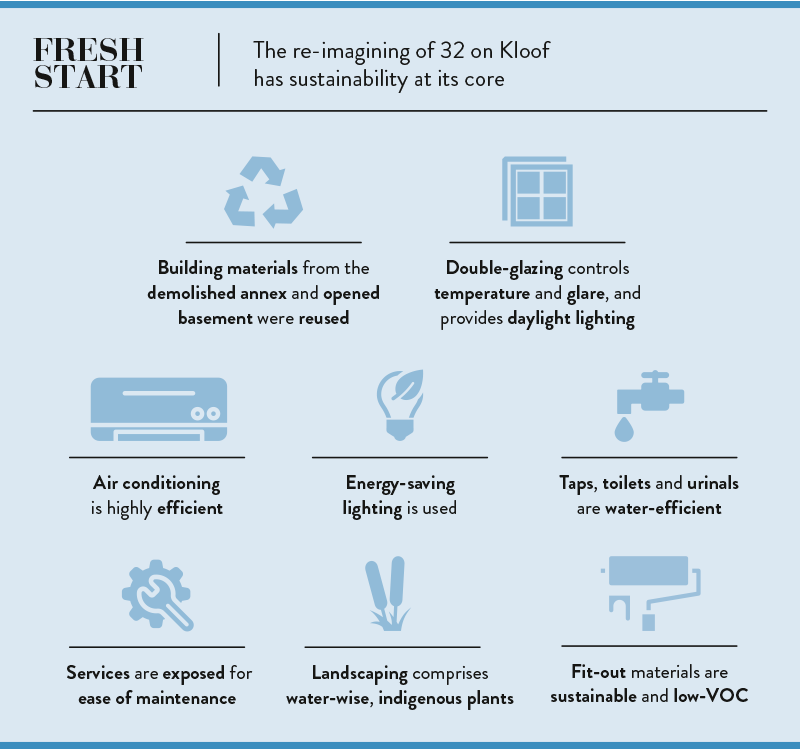 The lively yet laid-back atmosphere of 32 on Kloof provides little hint of the difficulties the developers faced creating it. One was to ensure the two storeys of the glass box laid atop the 1921 building were as light as possible, and that no key supporting walls in the old building were removed in opening up the floor space.

‘We used a Bond-Dek steel-slab system to minimise the weight on the existing heritage structure, and exposed services on the soffits to enhance the sense of height and space,’ says Swanepoel. ‘We also strengthened certain structural components in the old building, especially where beams in the basement had to be modified.’

To convert the basement, previously a damp, windowless, unusable space, into the  light-filled, dry, functional area facing onto the new sunken courtyard, ‘the existing drainage system was refurbished, allowing water ingress to the retaining walls to be collected and pumped out’, he says.

Yet the main challenge was obtaining all the statutory approvals for the project – first the City Bowl Ratepayers Association, followed by Heritage Western Cape, ‘who were very supportive of the design presented’, Swanepoel says, then Land Use Management: multiple setback departures were required to allow the top two floors to be aligned with the street boundary. 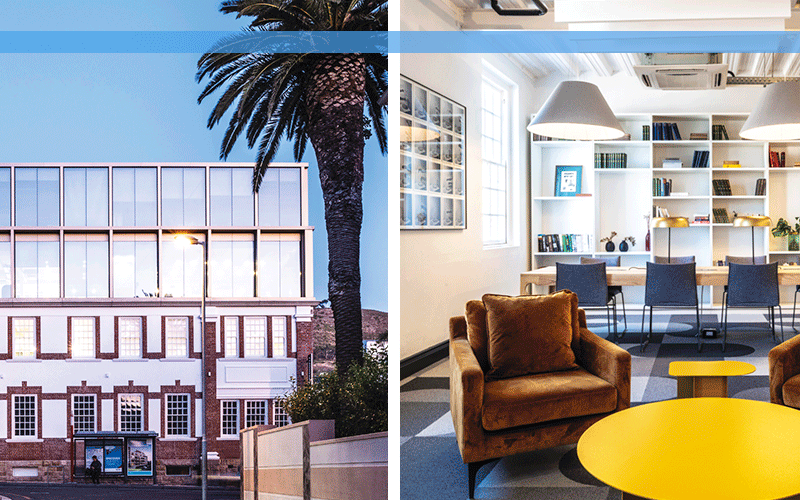 ‘Altering an existing building, particularly a building of significance, requires intensive, finicky, detailed work, and the cost is much higher than an all-new building – but the result is much more interesting.’

His favourite features? ‘The transformation of the basement into the most activated space in the building and the connection through to the precinct behind. Also, the visibility into the buildings from Kloof Street and the fact that there’s no parking on the site. We wanted the people passing by to be able to see inside, and feel welcomed into this space.’

Yet what gives Swanepoel the greatest satisfaction is the glass box addition. ‘I like the arresting but comfortable way the contemporary glass box rests on – and relates back to – the original facade, celebrating it in a subtle but striking way,’ he says.

As for Aikman, he believes the interventions will contribute to the long-term conservation of this important building. ‘And the public courtyard transforms an ugly hidden area into an asset to this part of the city.’