It’s an attractive five-storey office block overlooking a pocket of green, perched atop a hill in upmarket Umhlanga, north of Durban. It’s all glass, clean lines and imposing columns – a typical modern corporate office block with a nod to aesthetics. Welcome to Liberty Umhlanga, the KZN headquarters of one of SA’s major financial services companies. Yet it’s not the same building at all.

In the past 18 months, it’s undergone a stringent ‘green’ overhaul and assessment – resulting in a 4-star Green Star rating from the GBCSA under the Green Star SA Existing Building Performance (EBP) v1 tool. It was also judged joint winner of the best-quality submission at the GBCSA’s annual awards in October 2018.

All this has happened without one wall coming down, ceiling replaced, facade redone or other such structural changes often associated with a green building revamp. The building has reinvented itself inside out, showing what’s possible when efforts towards sustainability are directed in other ways.

Since its inception about four years ago, the GBCSA’s EBP tool has enabled hundreds of SA building owners, many of them major corporates and leading property developers and building management companies, to acquire green building credentials. And all this without spending vast sums of money or, more importantly, impacting on the environment with a new build. Very simply, it’s a green property management tool, according to Sally Misplon, founder and head of Misplon Green Building Consulting, who was responsible for the compilation and submission of the Liberty project to the GBCSA. Misplon has been involved in existing-building ratings since their inception, and was a member of the technical working group that devised the pilot for the EBP.

The tool has transformed how buildings are rated, and there has been a huge uptake in recent years, she says. It differs from the GBCSA’s new-building rating tool in a number of ways: the categories assessed are the same – but they are approached differently.

With a new building, the GBCSA would look at the location of the building, the materials chosen, access to amenities, and the green interventions incorporated into the building itself when it is built new or undergoing a big renovation. With an existing building, the same categories are assessed, such as management, energy, waste, transport, location, lighting and indoor air quality – but it is the implementation of these elements that is the focus. ‘This means that a building can be 100 years old and still be able to qualify for Green Star credentials,’ says Misplon. ‘Age is not the biggest issue – how a building is managed, is. The tool assesses if enough is being [done with] what there is.’ Using the management category for instance, Misplon explains how a consultant looks at certain building user-guides, operations manuals and maintenance management plans, and ensures preventative maintenance plans can be implemented to prevent capital expenditure and potential problems in a building. This in turn equates to a more sustainable building as a whole since all elements are being used efficiently. Very simply, for example, if ceiling fans work, it means there is better air quality. Overall, assessors look at the operations of the building and everything that falls under facilities and property management – how a building runs, from cleaning, to leasing, to air-conditioning maintenance. ‘We look at how we can bring those up to best practice by using the technical manual that the GBCSA provides,’ says Misplon.
‘Obviously most buildings already exist, so the GBCSA had to find a way to bring those up to best practice.’

Materials – most specifically procurement and waste management – are still addressed as part of the audit but, again, using a different approach. For procurement, assessors will check to see if a policy is in place advising on the use of the most sustainable product or material. With big firms, in particular, this can have a significant impact.
‘So, if you are going to repaint, are you opting for doing this in the most sustainable way? In other words, are you considering low- or no-VOC paints? Has the life cycle of that material been considered?’ asks Misplon.

When it comes to waste management, assessors look at the actual data of a building, whereas a new build or renovation looks at construction waste, what is being done with it and where it is going.

With an existing building, the focus is on operational waste from, for instance, tenants and landscaping. Assessors such as Misplon will look at performance over 12 months, using real data. ‘A new build is a snapshot; a point-in-time rating, predicting energy, water, waste and consumption, whereas an existing-building rating tool is looking at actual data over a 12-month performance period,’ she says. ‘Using real data, we compare that to a benchmark set by the GBCSA, which [uses] a similar building with a similar number of occupants, operating hours, type of building and a few other variables. [This is] calculated and assessed, with an outcome that says building X is an improvement on a conventional building and therefore it scores points.’ In many cases, a good property and facilities management team may have already made positive interventions, such as installing rainwater tanks and solar PV systems; replacing lights; or fixing blinds on windows to reduce glare and keep heat in and cold out. These initiatives are already going to score more points than a conventional building.

Misplon was engaged by Liberty’s three head offices in Johannesburg, Century City (Cape Town) and Umhlanga, but she points out that much had already been achieved before she came on board. Misplon took the buildings through an initial audit based on the Green Star rating, looking at what could be achieved, and conservatively hoped for 40 points, which is a 3-star (Good Practice)rating. ‘We were excited because a 3-star rating is still a great achievement,’ she says.

While assessing the hard data – energy and consumption over 12 months; waste management improvements; diversion from landfill; changing to green cleaning consumables where possible, implementing plans – the points began to add up. ‘The building had actually done much better than we expected, which was a fantastic surprise. We managed to target more points than initially thought. This translated into a 4-star rating [Best Practice] for the building and revealed just how efficient the facilities management team had been – even without the guidance of the Green Star rating and the technical manual … and my help. All I had to do was put it into writing and finalise the documents,’ says Misplon.

Of course, the process does not always run as smoothly as the Liberty project and Misplon cites one of the major challenges in the process as resistance from property and facilities management teams towards getting on-board with what can be an onerous task of daily duties and interventions. She heaps praise on Liberty’s team, who were highly engaged, willing and able to do what needed to be done, and was ahead of the curve in many ways. ‘They were great; they worked incredibly hard, were genuinely excited about the whole process – and there were many tears when we received the rating,’ says Misplon.

The achievement is particularly impressive given that the Liberty submission was awarded its stars after just one round, when around 98% of projects go through two rounds of submissions, feedback, and comments. ‘Not only did we not have to resubmit but we were two months early, so that was quite an achievement,’ says Misplon. 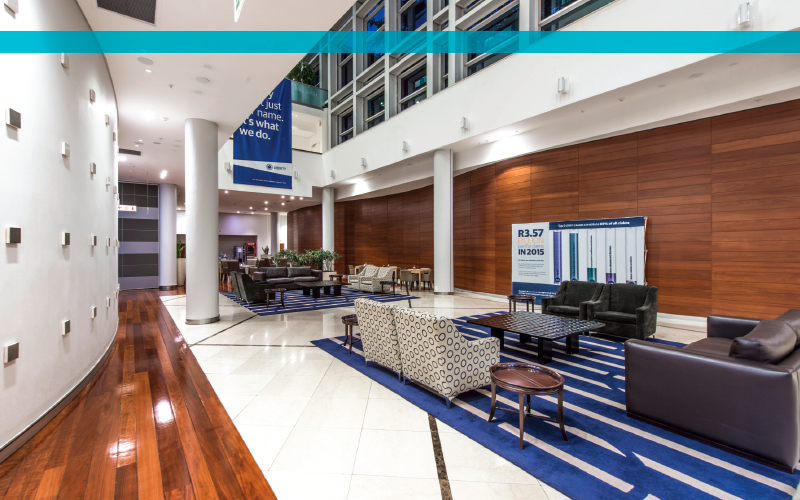 The GBCSA has nothing but glowing praise for the Liberty submission. ‘GBCSA congratulates the Liberty Group for initiating and pursuing a robust green-building strategy for this project,’ says Grahame Cruickshanks, managing executive for market engagement. He points specifically to its high score in the transport category of the EBP rating. The building’s proximity to public transport helped, but the project team also published a Green Travel Plan to measure and assess transport modes of regular building occupants and to promote alternatives. ‘As a result, this will reduce pollution and limit land development impacts from vehicle use.’

At the GBCSA’s annual Green Building Convention in October 2018, Paul Hawken, environmentalist and editor of Drawdown, which claims to be ‘the most comprehensive plan ever proposed to combat global warming’, identified air-conditioning refrigerant as having the greatest impact on global warming. Seen in that light, says Cruickshanks, Liberty’s efforts to reduce the ozone-depletion potential (ODP) of refrigerants used in the building are notable. ‘Some 93% of refrigerants used … have an [odp] of zero and a gradual replacement policy and plan has been put in place to replace all non-zero ODP refrigerants in the building.’

Misplon points to a growing willingness among firms, big and small, to engage with the GBCSA’s EBP and further their sustainability journey – whether driven by corporate governance guidelines, the bottom line, or just because it is the right thing to do. ‘We want this to become the norm. Slowly but surely it’s happening… It’s wonderful to see big developers and companies incorporating this into their standard policies.’

Building owner Liberty agrees. ‘Liberty Two Degrees [Liberty’s property assets division] supports the powerful role that the property sector can play in meeting sustainability goals, and it is embedded in our strategy,’ says Bharathi Kawal, asset manager at Liberty Two Degrees. ‘Our purpose is to continue to create spaces to benefit generations. We therefore embed sustainability values into the fabric of our organisation, as an essential and inherent driver for delivering measurable and positive impacts,’ he says. Kawal adds: ‘We aim to reduce the impact of our environmental footprint while influencing our development initiatives, partners, tenants and shoppers towards greater sustainability activities. The GBCSA gives us an opportunity to benchmark our buildings and strive to continually improve our environmental footprint and social relevance.’