When you are the owner of just over a hectare of trees and tranquillity, which happens to have a small lake at its centre, at least one design decision has already been made for you: your starting point will be this large, deep pond with its distinct community of plants and animals that will soon become your new neighbours.

That will be the easy part of building your house on a lake. Ahead lies a test of courage and fortitude and audacious engineering that, in the end, will deliver a floating timber box that will imbue your modern home with sensory resonance. They wanted a modern house, owners Tertius and Amor Dreyer told Braam de Villiers, whom they contacted after being stopped in their tracks by an Earthworld-designed house in Waterkloof. While the couple were specific about their requirements, which included spacious open-plan living, a view of the lake, a small gallery for the artworks they have collected over the years, a studio for Amor and a comfortable cottage for her mom, there was nothing in the brief about a floating timber box with a massive cantilever to the west.

The timber box, which functionally holds the bedrooms in the house, is one of three pavilions that stand in relation to the lake. The first, constructed from brick and concrete, houses a study, a storeroom, staff quarters and garages, and stands resolutely with its back to the street, forming a barrier between it and the main building, and circumscribing a large central courtyard.

Across the courtyard and facing the lake, the ground floor of the main house – also a brick and concrete box – comprises the open-space living area, a reading room, a TV room and a cottage, and is edged with decks and a natural pool. Soaring above it is the timber structure, which not only makes an emphatic statement about sustainability but, in relation to its concrete foundation, delivers a play between mass and lightness. Off-centre, an intriguing cuboid wood and glass structure juts out towards the lake, to contain the main staircase and a small gallery, with works by contemporary SA artists such as Branko Dimitrov, Adriaan Boshoff, Corne Weideman, Nicolaas Prinsloo and popular expressionist painter Frans Claerhout. 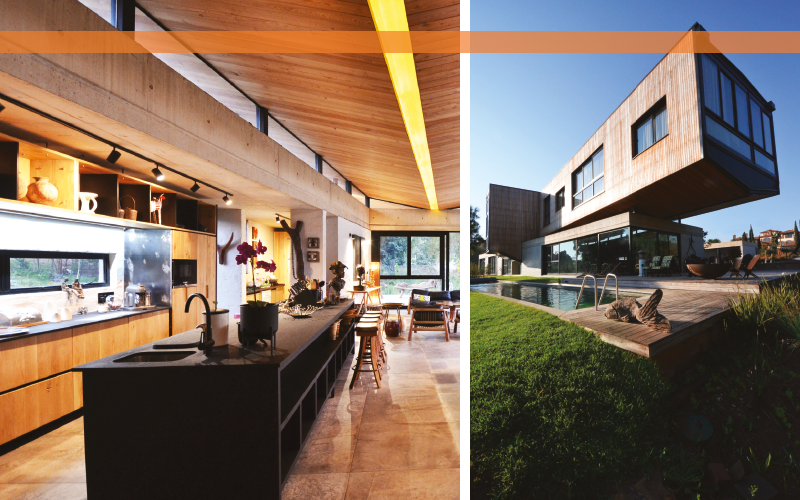 The house pays further homage to the site by offering a view of the lake from every single room, and the lake returns the favour by providing a perfect mirror for its striking linear silhouette. Tertius and Amor are both professional entrepreneurs. Tertius’ land surveyor consultancy is more than 15 years old and Amor has owned her own physiotherapy practice for more than 20 years.

A gifted interior designer, Amor has furnished the couple’s new home in neutral tones that display a remarkable synergy with the architectural finishes, and helped kick off the construction project with a file of beautiful photographs that De Villiers says ‘laid the table for the design’. Despite the compelling presence of the lake, the initial design solution wasn’t immediately as clear as it now seems. It was closely interrogated, both by the team at Earthworld and, even more rigorously, by Tertius and Amor. ‘It can be frustrating,’ says De Villiers. ‘But there is also a sense that it opens up the design for further exploration and interpretation.’

Something that was never in dispute was the role of natural light in the design. ‘Careful consideration was given to the manner in which the timber box floats above the concrete-brick one,’ says De Villiers. ‘This provided an opportunity for a series of clerestory windows that allow natural light to filter into the main living space from above.’ Large windows upstairs and a massive sliding door that opens the living area to the lake provide more breathtaking views and generous quantities of natural light: this is a house designed to be enjoyed year round. The easy flow between the living room and the deck, natural pool and open veranda underneath the cantilever invites outdoor living in summer, while the bedroom windows face the winter sun and fireplaces take the chill off the frosty Highveld winters. 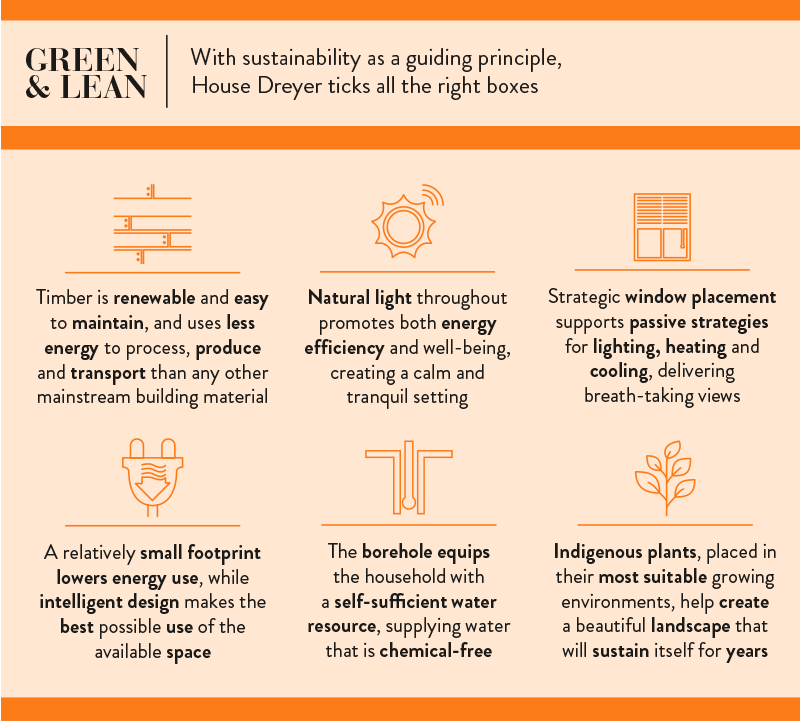 House Dreyer is an expression of De Villiers’ view that design should ‘create a sanctuary where people can dwell with meaning’. This is achieved by harmonising the home with its natural environment and acknowledging its inhabitants’ relationship to the world. Lastly, it is technology that guides the design. ‘The employment of appropriate technology in the way a building is crafted is one of the main design drivers in the Earthworld office,’ says De Villiers. ‘In this case, the specific way the concrete box was designed to accept the light timber box and the way technology was used to achieve the lightness of the timber structure, were both extremely important.’

The timber structure presented ‘immense challenges’, De Villiers admits. Everything was complicated – from the structural form to the cladding design and the fitment of the window system. Despite the complexity, the couple didn’t deviate from the original plan, but instead adapted the detailing where necessary. The choice of timber over concrete was, however, no mere architectural whim. Sustainability is a universally important design guideline, and has led to the beginning of the ‘timber age’, as architects worldwide embrace wood as a sustainable alternative to steel and concrete, and new types of engineering timber change the scale of what is possible to build out of wood.

De Villiers used laminated saligna for the main structure, a naturally durable wood with a straight grain and fine texture that originates in Australia but is widely cultivated in SA and Zambia. Beechwood ply was used for the internal cladding, while the external cladding is Larch wood, from a species of conifer that is reported by the International Union for Conservation of Nature as being a species of least concern.

Aside from sustainable materials, natural light and outdoor views, House Dreyer scores extra green points for having a relatively small footprint, which has the added advantage of ensuring an active family life for the three-generational household. The Dreyers moved to Mooikloof Estate from Montana Park, seeking safety, tranquillity and space, factors that have grown in significance since their now one-year-old son Ghemièl joined the firm. Equally delighted with the vast opportunities their new residence offers for outdoor recreation are the couple’s Great Danes, Bono and Zola.

The presence of a borehole that could supply irrigation demands without violating water restrictions was another strong recommendation, says Tertius. It was De Villiers who introduced the couple to Michéle Terblanche, author of Small Gardens for South Africa and owner of landscaping business Lilymela. Terblanche says she designed the garden to ‘enhance the bold funk of the architecture’, and to preserve the tranquillity that attracted the Dreyers to the site in the first place. 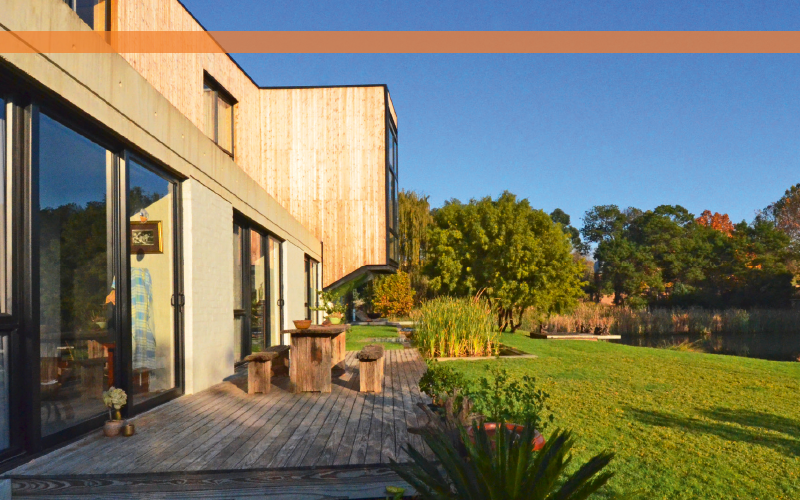 Tertius and Amor shared the same priorities when it came to the design of the house but, in the garden, their tastes diverged. Their solution was to give Terblanche free hand. Amor loves succulents, fynbos and flowers, says Terblanche, ‘while Tertius wanted most of the garden to look like the surrounding veld’. And the ever-present lake, of course, had demands of its own. Terblanche culled as many wattles as she was allowed to, planted indigenous trees and interplanted indigenous grass types with succulents and flowers. The aloes and salvias are already attracting birds and bees; a conversation has started between the rectangular dark-green swimming pool and the more forgiving contours of the lake, and the mossiness of the courtyard welcomes visitors and ‘honours the sensitivity of the people living there’.

While Terblanche grants that ‘no garden can be Great Dane-proof’, Bono and Zola will hopefully appreciate the roaming lawns and walkways designed for their enjoyment, and learn to stay out of the salvias. ‘The garden is not yet complete,’ she says, and describes a future garden where the new trees and the water plants will have established themselves, and the waterbirds, generally not huge fans of construction, will return to the lake.

De Villiers, who believes the garden is key to harmonising a house to its surrounding landscape, says the beautiful natural landscape Terblanche has created not only complements both the building and the natural features of the site, but will sustain itself for years. In the end, this is what satisfies him most. ‘The way the home blends into its natural context, and settles into the site.’