The Woolworths at Waterstone Village in Somerset West may not be the newest kid on the retail chain’s block anymore (it opened in 2013) but it plays a unique role as a testing ground for the company’s broader food strategy. It was built as a showcase for bold new ideas with, above all, an emphasis on fresh produce, and these days it continues to innovate, not least in its impressive sustainability credentials, culminating in a 4-star Green Star rating (Existing Building Performance v1 Custom Tenant) from the GBCSA at the end of last year.

‘Waterstone is a great store purely because it embodies everything that the food strategy wants to be for the customer,’ says Michael Kemp, head of architecture and planning in Woolworths’ real estate development division. ‘If there’s a physical manifestation of our food business, and what it wants to stand for in the eyes of the customer, then that is it.’ 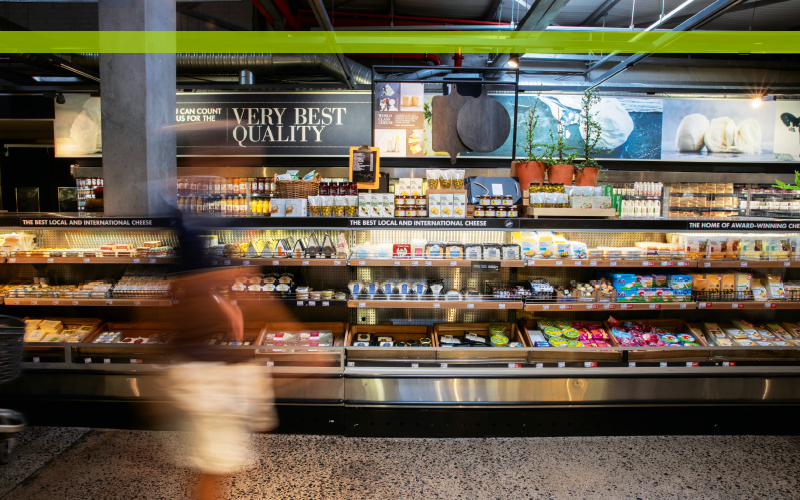 When it was first developed, the Waterstone store was pioneering in a number of ways. At the time, it was the biggest Woolworths food market ever, with almost 2 500 m² of space. It was the third large supermarket of this type to be built, right at the start of the company’s drive to create a bigger food business, and represents that strategy at its fullest. ‘So all the initiatives that make up the food strategy are represented: the full range of product catalogue, and all the specialised services that one would expect in a supermarket of that size,’ according to Kemp.

Design-wise, the look and feel of the store were revolutionary, and have since influenced the format of every other Woolworths supermarket – not to mention those of several of its competitors. ‘The design stripped and exposed the existing building structure, featuring a rustic ground-concrete floor and exposed ceiling and services,’ says Duncan Kohn, associate director at R&L Architects, the firm responsible for the project. ‘Waterstone was a step away from how previous stores looked and felt. This released the design from conforming to typical standards and opened the way to a new look and feel.’ 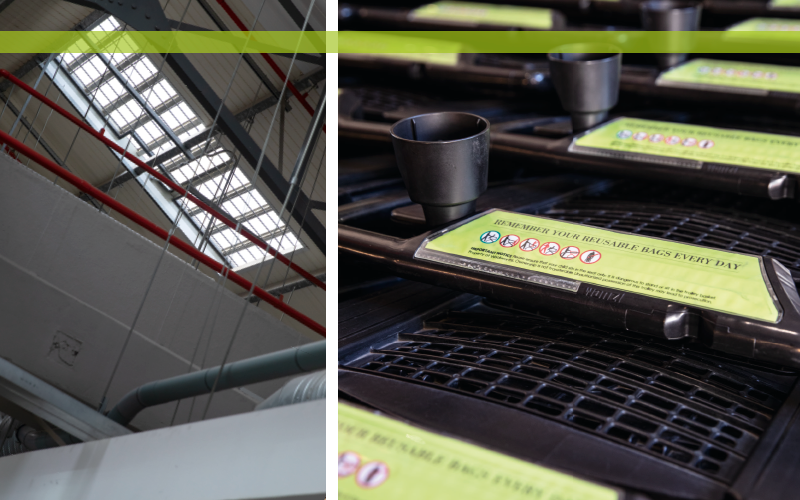 The boutique style is instantly recognisable to today’s shoppers but at the time, the open, intuitive layout, artisanal materials, reclaimed timber and natural light were a strikingly different direction for a supermarket to take. It was a vision that would be recognised in 2014 with a prestigious international design award from the Association for Retail Environments.

Also remarkable was the grouping of the products. Most notable was the focus on the fresh produce, with a large, open food market front and central. This was in marked contrast to the traditional supermarket arrangement of the time – ‘fridges all around the perimeter of the store, groceries stuck in the middle’, as Kemp puts it.

This breakthrough was no accident but the result of careful research. ‘We travelled quite extensively to understand what some of the boutique supermarkets in the world were doing,’ says Kemp. ‘We established that there’s a lot of emphasis, especially with the upmarket boutique supermarkets, on freshness.’ Thus, the protein, fresh produce and bakery goods would be prominently grouped in a ‘fresh emporium’, with long life and non-perishable goods towards the back. Waterstone is an unusually large store, and the challenge of that, as Kohn points out, is ‘to create interest throughout. It’s tricky to get the customer to shop the whole store’. 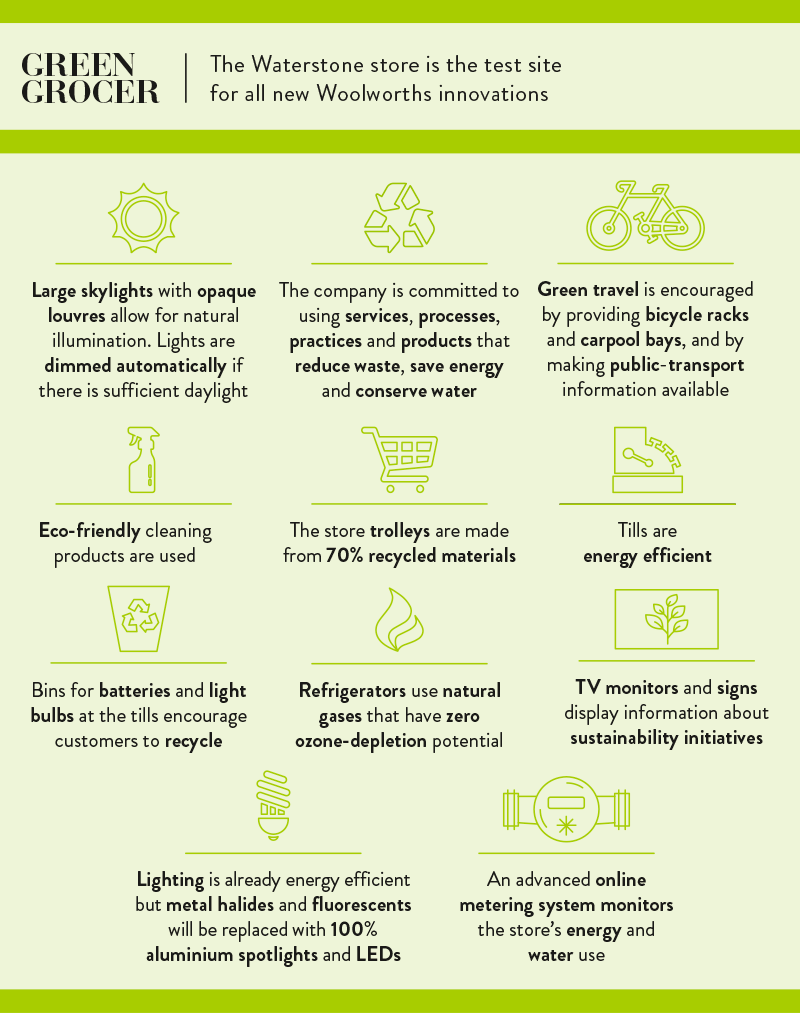 ‘You can imagine trying to create a positive retail experience in two-and-a-half thousand square metres,’ says Kemp. The danger is that you create a great impact with the attractive fresh produce at the front of the store – but ‘by the time you get to the Handy Andy, at the back, there’s no experience’, he says.

The solution? ‘We created different “lifestyles” to draw the customer through,’ says Kemp. ‘Different experiences throughout the store that actually make it exciting to get to the Handy Andy. Everywhere, almost in every aisle, there’s an experience.’

A shopper’s path through Waterstone winds past many enticements: beauty stations, coffee stalls with trained baristas, tasting stations for olive oil and wine, just-squeezed-juice bars, takeaway snack and hot-food counters, as well as specialist butchers, sushi chefs, chocolatiers, fishmongers, cheese counters and artisanal bakeries. ‘You can actually go and have lunch as you walk through the store,’ says Kemp. ‘You want to take the “boringness” out of grocery shopping.’

These innovations have subsequently been rolled out everywhere, in scalable form, to myriad smaller Woolworths stores – attracting a number of imitators in the industry. And the store’s pioneering, experimental role is not all in the past: today it’s still testing the boundaries of what a grocery shop can do. ‘Everything that we develop to be scaled down into the other units, every new initiative, every test for a new product, every service adjustment starts at Waterstone,’ says Kemp. ‘It is key for us because that’s where we test everything. If we bring in a new initiative as part of the overall food strategy, we would test it in Waterstone first. So even though the design might be a little bit dated, all the initiatives are current from a strategy perspective.’ 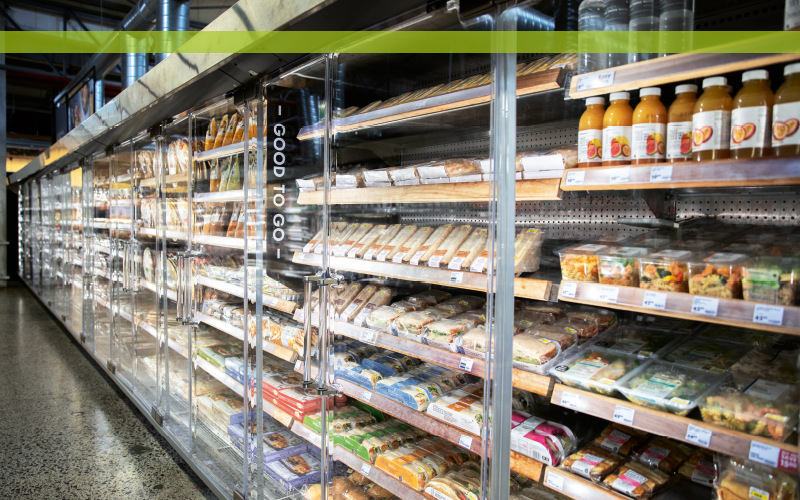 As Kohn confirms, Waterstone formed the basis for future Woolworths stores around the country. ‘New concepts and ideas are often trialled and tested at Waterstone, keeping it current and on the cutting edge of retail design,’ he says. These days, that urgent cutting edge is all about sustainability, and here Waterstone is once again ahead of the game. ‘What makes this project unique is that it is one of two projects, the other being Woolworths Palmyra Junction, which is pioneering the rating tool that has been used – Green Star: Existing Building Performance V1 Custom Tenant rating,’ says Michael Hohlfeld, sustainable design consultant at Terramanzi, the green business consultancy that worked with Woolworths to attain the rating.

The store did not have a Green Star rating on opening, although from the start it featured ecologically sensitive elements such as natural illumination, dimmable lights and heating harvested from the refrigeration plant. It was also one of the first Woolworths stores to reduce packaging, with fresh produce displayed loose in an effort to cut down on plastic.

However, the goal was to hold the store to even higher environmental standards, and to aim for a strong green rating. ‘It has always been the intention,’ says Woolworths energy manager Quentin Zevio. ‘A couple of years ago, we decided to look back at the green sites that we had, Palmyra and Waterstone, and while we always had our internal rating system, we wanted to see how they fared on an external system.’

The new GBCSA rating category made this possible for the first time. Before, ‘the reason we didn’t go through external rating at the time was the GBCSA was very focused on residential and office buildings’, says Zevio. ‘Most of the retail that had been rated was from a shopping-centre and landlord point of view, so we kind of turned the thing on its head and looked at it from the tenant’s point of view.’ 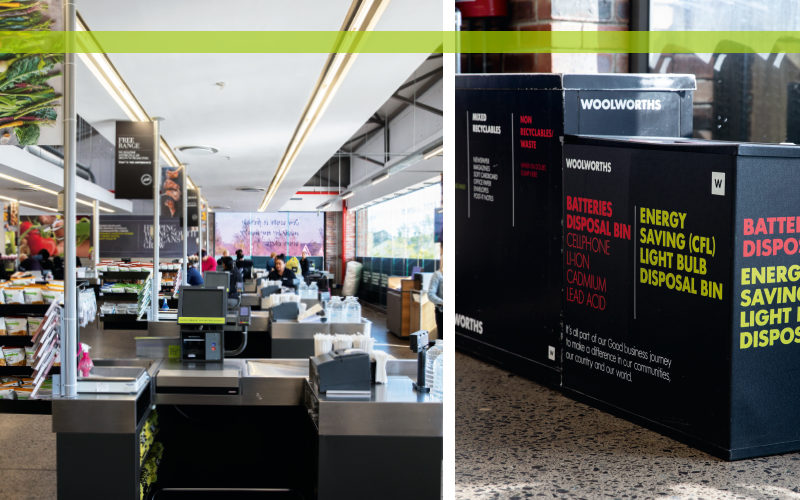 While there is no immediate plan to push for an increased green rating for the store, the will to keep improving is there. ‘I feel that the Waterstone store will, in time, aspire to be on par with the Woolworths Palmyra Junction store. If not, then perhaps a 5-star rating. This may be achieved by significantly improving energy and water performance efficiencies,’ says Terramanzi’s Hohlfeld.

As it is, existing features are constantly being tweaked: a few months ago, Waterstone took part in Woolworths’ big roll-out of revolutionary new cold-air-retaining acrylic doors on all the fridges. The firm’s energy-saving and emission-reducing refrigeration systems are a particular source of pride. ‘We run very, very efficient fridges,’ says Kemp. ‘The power of the Woolworths food brand rests on its freshness and the guarantee that we put behind the sell-by dates. And the fridges are the big driver of that brand integrity.’

And no store embodies that brand more, when it comes to fresh, forward-thinking food strategy, than Waterstone. Kemp says: ‘If you want to understand what the Woolworths food business is about, then you’re going to live it and experience it at Waterstone.’

Jane Molony, executive director of PAMSA, on how paper and its  by-products are a... END_OF_DOCUMENT_TOKEN_TO_BE_REPLACED