Banks may not immediately come to mind when it comes to sustainability. But that’s changing. Since 2012, the Absa Group has reduced its energy consumption and carbon footprint by about 30%, proving that banks can support green energy and reap financial benefits.

Last year, Absa announced it would invest R22 billion into 12 local renewable energy projects that will generate 1.2 GW of electricity in coming years. But investments aside, the group has earned kudos for its own award-winning Energy Centre at its Johannesburg campus. The campus’ energy-efficient buildings, which include the Energy Centre and greywater plants, are capable of being self-sufficient so as many as 9 000 Absa employees can continue to take care of banking business during load shedding.

What’s more, annual CO2 emissions were cut by 19 000 tons in Phase 1 of the project alone − the equivalent of planting 1 900 ha of forest. The decision behind the Energy Centre dates back to between 2007 and 2009, when power outages impacted SA businesses. The bank’s flagship office, Absa Towers West, was being constructed, so ‘the team decided to diversify its energy supply to include natural gas and build an internal electrical grid for the nine office areas, housing a few thousand staff members, in the Johannesburg CBD campus’, says Aveshen Moodley, Absa’s VP of environmental sustainability.

The combined diesel-gas system, which generates power synchronised to fixed power drawn from the grid, and reuses waste heat for space and water heating, has run in the underbelly of one of the buildings since 2010. The eco-friendly power plant earned Absa Towers West the first 5-star Green Star As Built rating in SA that year, and paid itself off in 2017. ‘More importantly, we’ve increased power resilience to our business,’ says Moodley. 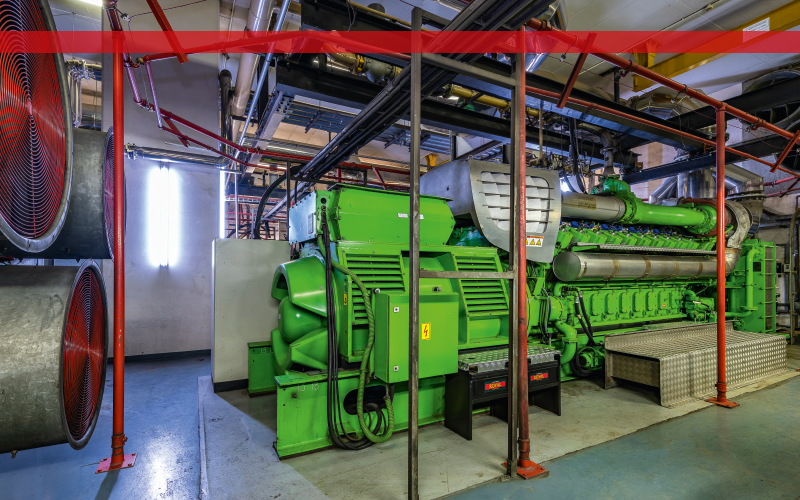 Absa Towers West, in Troye Street, was one of several high-rises on the CBD campus, so ‘the Energy Centre was also reticulated to nine offices, gaining on commercial benefits by changing our electricity tariff to time of use,’ says Moodley. The iconic 30-storey Absa Towers was sold in 2019, and it is currently being developed into a mixed-use building, 10 floors of which Absa will lease as office space. Employees will be given first preference on residential rentals, and there will be an Absa art gallery on the ground floor.

The Absa Energy Centre is a micro-grid of four energy sources. ‘Our primary and cheapest form of energy is from the national utility. Secondly, we have back-up diesel generators that start up during a power outage,’ says Moodley. Once these generators, which can tolerate large power variances, stabilise the power load, it’s passed to the third energy supply − gas generators − and the diesel generators switch off.

Finally, a solar plant – the micro-grid’s cleanest energy source − feeds directly into the building. The design engineer for the power plant, Ken Gafner from Single Destination Engineering, explains further. ‘The solar plant supports part of the load of the Absa Towers North building, and operates independently of the Energy Centre. The gas generation plant can operate in parallel with the utility supply or support the entire campus in an outage. The proportion of the total load is optimised based on the electricity tariff and the contracted gas consumption. The gas engines are able to fully support the campus as required, and the transition on mains failure and restoration is seamless. The diesel generators provide independent and rapid emergency power if a power failure occurs at a time when the campus isn’t fully supported by the Energy Centre.’

To Absa’s knowledge, this was the world’s first micro-grid set-up that synchronises gas and diesel with national utility supply, says Moodley. The set-up also uses the potential for combined heat and power to reduce emissions. With waste heat from the gas generators being used for heating building space and water, ‘the Absa energy project was the first large-scale combined heat and power project serving a multi-building campus in Southern Africa’, says Gafner. ‘The campus was ring fenced, a new substation was provided, and new distribution for electricity and low-temperature hot water was installed. This required that approximately 100 sleeves be drilled below the roads to link the basements of all the buildings.’ 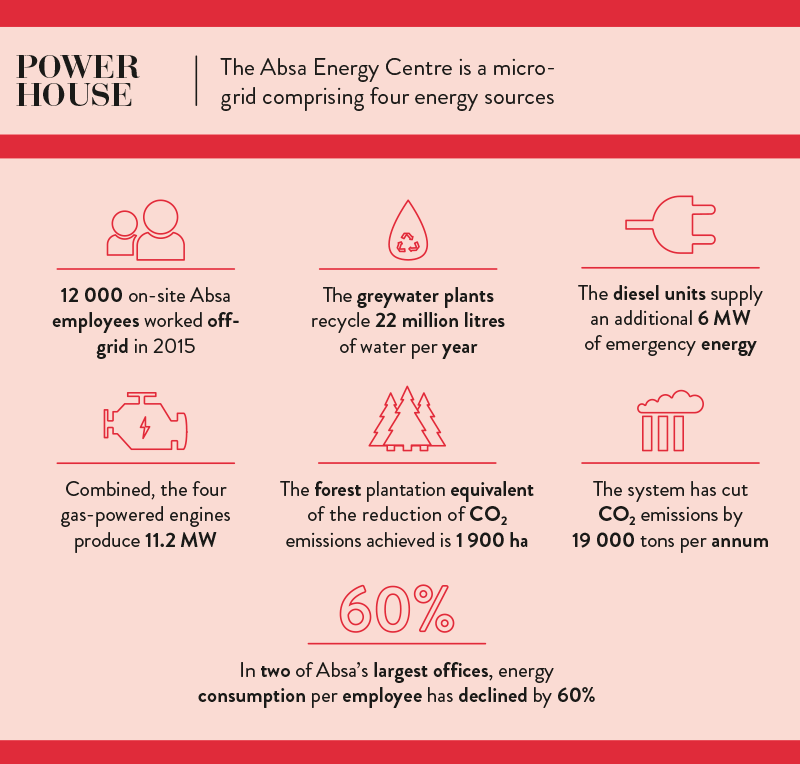 After an initial investigation into own-generation technology options such as gas engines, diesel engines, gas turbines and rotary UPS – uninterruptible power supply – natural gas was deemed the most resilient. While natural gas is a fossil fuel, Moodley says it’s still 70% cleaner than the coal most local power-generation still relies on.

Coal ‘has an environmental emissions factor of close to 1 kg carbon for every unit of energy produced, not incorporating the losses for the transmission and distribution of energy via the national grid’, he says. ‘Natural gas is piped and distributed via a network that probably has distribution losses as well, but the environmental emissions factor is 0.2 kg of carbon for every unit of energy produced.’ The figure for diesel, on the other hand, is equivalent to 0.23 kg.

The system comprises four GE Jenbacher J620 gas engines. While each is capable of producing a peak output of 3 MW, here they’re optimised to peak at 2.8 MW. The gas comes from Egoli Gas, the council-owned natural gas supplier that services various regions in the city through kilometres of pipelines. Given the distance of the campus from Egoli’s Auckland Park site, 6 km worth of pipes were installed.

Waste energy from the gas turbines is harvested for use in the air-conditioning and heating systems. Annually, the gas turbines decrease Absa Towers West’s carbon footprint by about 19 000 tons.

With gas, safety and sustainability are key. The incoming gas is low-pressure, and no reserves are held. There’s a continuous piped supply, and if the system’s sensors detect a leak, the main valve closes automatically. ‘The interfacing to the utility supply is in accordance with the Eskom embedded-generation specifications,’ according to Gafner. ‘And the safe, reliable operation of the plant is achieved by designing for maintenance to be undertaken – with part of the plant isolated and worked on safely, while the remainder of the plant remains in normal operation.’

Gafner says the Absa campus offers a working example of clean, efficient, own-generation energy. ‘The carbon footprint is 40% to 60% lower, 1.3 litres of water are saved for each kWh generated, and the particulate emissions of coal-fired generation are avoided.’ What’s more, the reduced carbon footprint and water consumption aligns with government’s Integrated Resources Plan (IRP), which is being finalised. ‘The IRP includes 500 MW per year of own-generation, which will encourage more projects similar to this.’

When Absa realised there was a 30% leakage rate of water being distributed to the offices, they installed two greywater plants. Water collected from basins and showers is filtered and cleaned before being pumped into holding tanks for flushing toilets. The greywater plants can collectively recycle up to 22 million litres of water annually. They cost around R7 million each, and paid for themselves within five years. The campus was the first Absa site globally to install a solar plant of its size: about 6 000 panels on the north-facing roof of Absa Towers North, when Absa was still a subsidiary of Barclays. ‘Our first 400 kWp solar plant, based on polycrystalline technology and installed in 2013, consists of a roof-mounted system and a ground-mounted system at seven-storey height. The second plant, installed in 2015, is a 1 000 kWp rooftop system based on thin-film technology,’ says Moodley. 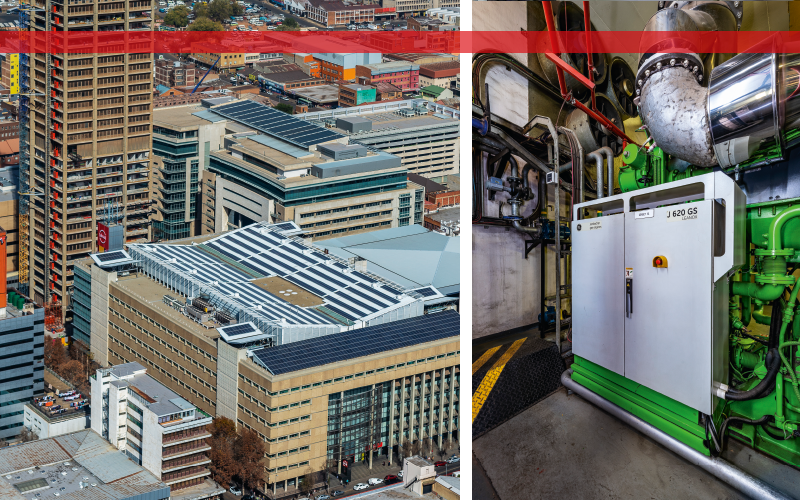 Given that the offices have a high electrical baseload, the solar plants remain grid-tied; staff here work off-grid for part of the working day. The first plant will pay itself off this year, and the second will do so next year – then Absa would have paid off power equipment, which has a lifespan of about two decades.

Besides power generation, Absa has taken several steps to make its operations more sustainable. For example, the roof over Absa Towers West’s atrium is transparent, allowing for natural light to enter. An automatic system measures the lux levels, controlling total lighting to the brightness required. After workers have left an office, sensors automatically switch off electrical lighting.

Cooling and heating air was the campus’ biggest energy consumer. So in the evenings, natural cold air is flushed through the building from the bottom, with warm air pushed up and out. In addition to the environmental and commercial benefits, the project has made for a better working environment and alleviates pressure on the local power supply. Moodley says the company is consolidating its property portfolio, with future plans for more agile, net-zero offices in green buildings.

In addition, Absa is launching a 2030 environmental action plan including more ambitious, science-based targets. Another novel way Absa has supported the environment is its project on World Environment Day 2017 – setting up birdhouses on one of the building’s roof, as well as in other Gauteng locations, to help promote the breeding programme for Peregrine falcons. ‘Absa wants to remain a steward for the environment, so that we can challenge other businesses to make their own efforts towards saving the environment. There is no Planet B.’