When IT entrepreneur and philanthropist Anthony Fitzhenry, the power behind bicycle charity Qhubeka, teamed up with Paul Boshoff, maverick architect with roots in farming, the result could only be a coup for the eco cause. The project is Hotel Nieu, born, as the website puts it, ‘of a desire to create intentional urban communities… To provide upmarket hospitality services to like-minded people who care deeply about sustainability and appropriate stewarding of resources’.

In what could be a prototype for cities across SA, the development at 38 Marais Street in Muckleneuk, Pretoria, a suburb surrounded by university campuses and parks, is an arresting blend of older existing buildings, newer ones and purpose-built structures, creating a modern sanctuary in an urban hub.‘It’s all about honest design and finding the most appropriate solution, and we’ve developed and tested a new approach with this hotel,’ says Boshoff, who heads Urban Concept Architects. ‘We pride ourselves on accepting the challenge to create buildings that aren’t only functional and cost effective but striking, exciting and beautiful.’

It’s an approach that rides in tandem with that of Fitzhenry, who founded non-profit Qhubeka to raise funds to provide bicycles to rural communities for access to schools, clinics and jobs, and help first responders reach areas affected by floods, fires and other natural disasters. Fitzhenry is also a founding member of Inqolobane, the Employee Ownership Association Africa, which promotes ‘entrepreneurial democratic equity’ – a passion that began when he spearheaded an employee-ownership trust at the IT business he started in the late 1980s, Axiz, enabling workers to become owners, and influence and benefit from future growth of their company. It’s part of the ethos encapsulated in Hotel Nieu.

‘The Nieu philosophy is concerned primarily with the most appropriate use of land and resources,’ says Boshoff. ‘It revolves around six elements of sustainable net-zero living: human capital, water, energy, food, personal security and transport.’ These were central to all three elements in the development – old existing, new existing and purpose built – which together offer 16 individual private suites for short- and long-term stays, along with business facilities such as a 10-seater boardroom and dining room. ‘The biggest concern as architect and co-developer was getting buy-in from the community and local authority to have a “nieu” way of thinking,’ says Boshoff. ‘For the rest, I had the privilege of total design freedom. The best part is that any and all challenges can be resolved, and I’ve always said the more restrictions, constraints and limitations a project has, the easier the design. There’s nothing worse than a blank sheet.’

The prime design challenge, Boshoff says, lay in defining a different approach to the old existing, new existing and new-built structures and landscape. ‘The old existing buildings were generally more than 60 years old, which meant they were automatically classified as heritage buildings. We worked to preserve and conserve them, modernising them and overcoming inherent flaws – in insulation, utilities and orientation – with newer technology elements in a sympathetic yet complementary way. Our aim is always to reduce utility demand and dependence.’

The new existing buildings, most built around 10 years ago, often already offered modern amenities, such as better thermal properties and efficient utilities, he says, ‘so we used what was appropriate, and augmented and enhanced as required’. Most exciting from the architectural perspective was the new-build segment. ‘It was all about designing a prototype that could be located anywhere, with no infrastructure, incorporating the best design practice today.’

Boshoff’s solution: ‘A self-sufficient living pod that allows for rapid deployment. Form follows function. It may sound like a cliché but the optimal room, ablution, orientation for both solar roof and comfort, water reservoir, service overhang and privacy, determined the final shape. It has a machine-like quality.’ Each pod has been given a north orientation ‘for good passive heating’, and sits above a water-reservoir with a concrete raft foundation, to help modulate temperature. 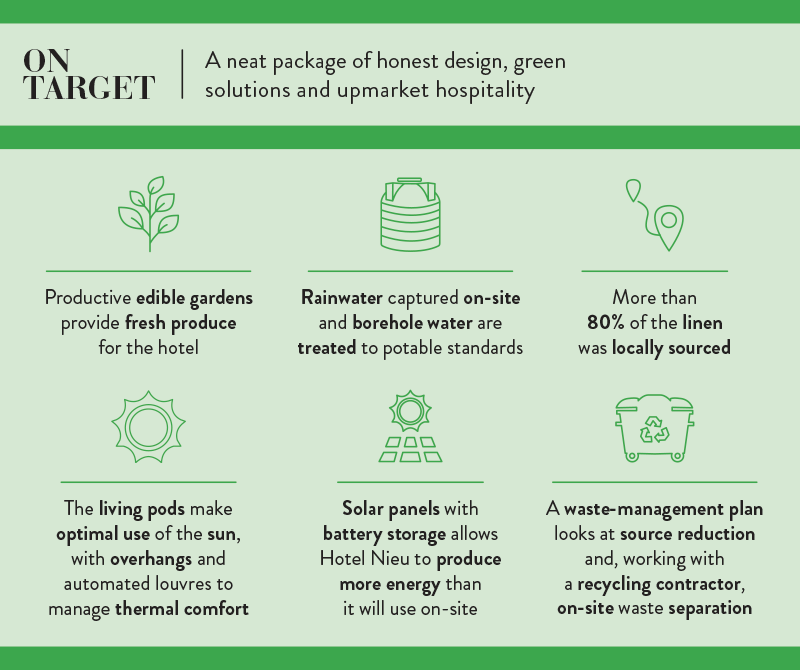 It has a lightweight, highly insulated top structure, ‘to make for easier transport and assist in temperature regulation and control’, and a plug-in ablution module that’s factory assembled and fitted. Solar panels on the corrugated sheet metal roof are linked to EndlessPower control modules, which provide all the pod’s energy needs. And there’s an insulated hot-water solar-powered vessel, sized to accommodate water-based (in-slab) heating during winter.

Zendré Compion of Solid Green, sustainable building consultant for the project, explains that a net zero carbon building is one that’s highly energy efficient, with the remaining energy use generated from renewable resources, so there are net zero carbon emissions over a year. In the case of net positive carbon buildings, as the pods created for Hotel Nieu aspire to be, the aim is for energy from renewable resources to result in more power being produced than is used on-site. 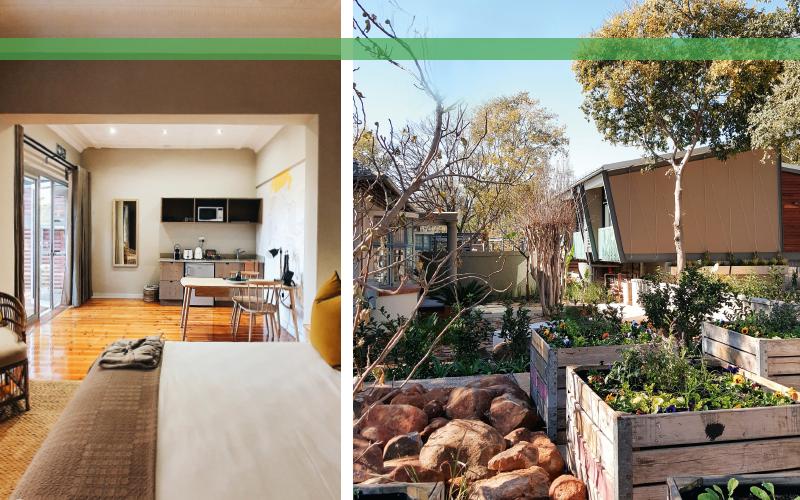 It’s a hugely important aim, says Compion – a game-changer for sustainability in the building industry, pointing the way for future developments. ‘At present, the building industry produces a third of the world’s CO2 emissions. This means it should take the lead in trying to radically reduce the amount of CO2 generated in the construction and operations of buildings. While net zero carbon is a critical measure, Hotel Nieu goes well beyond by assessing its impacts in all aspects of the development. Achieving net zero in a project like this –adaptive reuse/new build in a suburban area – shows that it doesn’t need to be an aspiration goal but is possible to implement already.’

Hotel Nieu is doing it by applying not just strong passive design principles but a ‘rational design process’ that includes specifying high-performance materials and active energy-producing systems, such as solar PV with battery back-up, according to Boshoff. ‘As well as our energy-efficiency and generation measures, the project uses tested low-energy light fittings, water heating and appliances, and we monitor and audit our energy consumption to ensure continuous improvement. We harvest and treat rainwater for reuse, and provide on-site-purified drinking water, and a public […] drinking fountain. We use borehole water instead of municipal, and feed irrigation and stormwater overflow back into the system through our landscaped wetland. In addition, we monitor and audit our water use, and use water-saving sanitaryware and appliances, all of which helps us minimise our water footprint and see not a drop is wasted.’

A key contributor to such sustainability is the landscaping. And this, says Lucas Uys of Uys & White Landscape Architects, has been all about ‘changing an overgrown suburban garden into a new adventure for the senses, by establishing an interactive sustainable food-producing landscape’.

It began with clearing a mass of redundant vegetation. Then, to ensure there would be enough sun energy for the level of photosynthesis that food production requires, they had to remove a number of alien trees, and prune the old indigenous Celtis africana (white stinkwoods) to lift their canopies and allow in sunlight. ‘We selected food-producing trees and shrubs that would suit the climatic conditions and not be overly onerous to maintain and tend to, and low-maintenance vegetables and herbs, as well as other elements that enforce the ambiance of farming. The sounds and textures of cracking bark chips, macadamia nut shells and pebbles under your feet when you traverse the food garden indulge the senses and awaken the “farmer’s blood” in each visitor’s veins,’ says Uys. 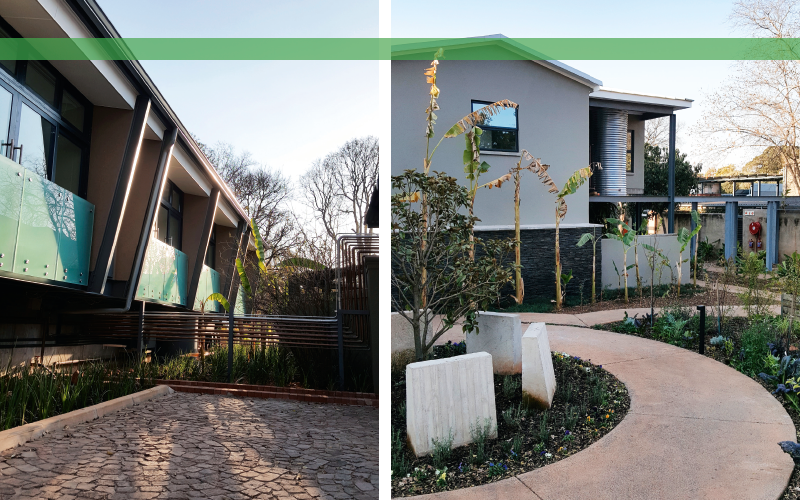 Stormwater harvesting and storage, and the biofiltration of harvested and used water through artificial wetlands, presented its own challenges. ‘The main one was to prevent the water becoming stagnant, and prevent algal bloom,’ says Uys. ‘The solution was to circulate the water through a planted reed bed. It aerates the water, and the root systems take up nutrients in the water, which prevents algae from establishing, leaving it crystal clear.’ Visually, the most striking features are large wooden bulk bins planted with vegetables, and some larger, more permanent crops, such as prickly pears, and the banana plantation behind them. ‘We were very pleased with the outcome,’ he says.

But there is still more to follow at Hotel Nieu: a planned conservatory will showcase vertical hydroponics. ‘A vertical wall of thriving vegetables will define the space which will make up the reception area,’ Uys says. ‘We can’t wait!’