It’s a hard-working, sectionally tenanted office space that pays attention to best practice when it comes to sustainability. It’s also an elegant addition to Richefond Circle, a precinct of small properties on a sea-facing Umhlanga site that used to be home to swathes of sugarcane fields.

As lead architect Greg Gordge of Elphick Proome Architecture, who was tasked with the design, explains, the brief for 29 Richefond Circle was relatively simple and open-ended. ‘Our client, Growthpoint Properties Limited, wanted us to maximise the floor area ratio allowance and make best use of the space while making the most of the sea views,’ he says. ‘Sustainable business practices and considerations also played a critical role in every decision made.’

Today, this 4-star Green Star-rated development comprises three levels of grade-A office accommodation, a roof-level shared meeting and entertainment area and two full levels of on-site parking. It’s one of the latest additions to the portfolio of Growthpoint – the largest property investment holding company listed on the JSE.

The most important consideration when it came to designing the building was its orientation, says Gordge. ‘It is situated along the northern section of the site with south-easterly and south-westerly sea views. To allow for maximum daylight and to ensure the building is as energy efficient as possible, it is glazed along the southern facade, while apertures were controlled and minimised along the east and west facades. Another key aspect to take into account was the parking ratio of four per 100 that needed to be accommodated. Height restrictions for the area also needed to be considered.’ The result? The functional yet elegant architectural character of the build celebrates both simplicity and visual impact. 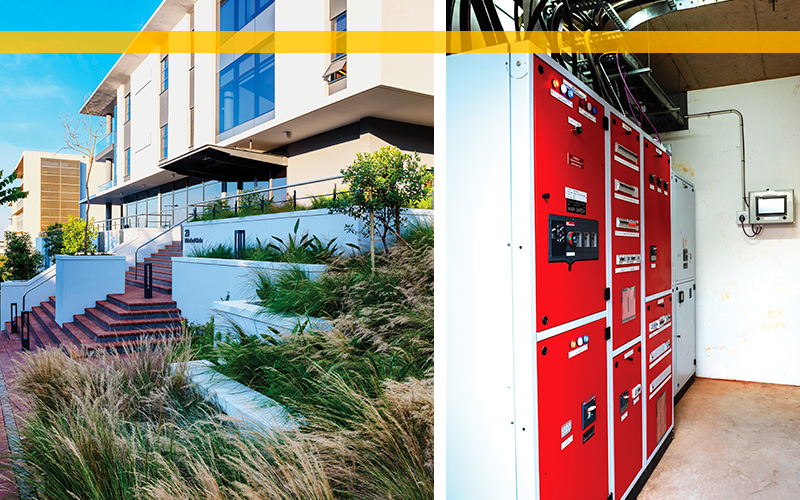 The rooftop, with its planted ‘sky-bar’ area, flows into a wall on the northern end and returns back as the floor on level one. This encapsulates two floors into what Gordge describes as a letterbox shape. ‘Generous balconies with frameless glass balustrades afford maximum views while also creating pause zones for the varied tenants,’ he says, adding that overhangs created from suspended concrete provide essential shade and an extra dimension to the letterbox motif.

‘Inside, the generously proportioned central spaces offer a sense of flow and communality, while the tenanted areas afford great flexibility when it comes to creating different configurations as required. As Gordge explains, the exterior boasts a simple palette of textured solidity and glazing, while the interior is fitted with contemporary, warm finishes that enhance the sophistication of the development.

Importantly, this boutique, north-facing office block is not just an aesthetically pleasing addition to the Umhlanga coastline, it’s also an eco-conscious build. The development has attained a 4-star Green Star Office v1.1 Design rating, and is currently in the process of completing the 4-star Office v1.1 As Built rating. Solid Green Consultancy is the company responsible for guiding the project design team in creating a comfortable, healthy building that is highly efficient in its use of energy, water and resources.

Prior to construction, a comprehensive environmental management plan was developed to minimise the impact of construction work on the local environment. For starters, as Nomamfengu Mbele of Solid Green Consulting explains, the building contractors had originally planned for more than 70% of the demolition and construction waste to be re-used or recycled. ‘However, as we began assessing the progress of the contractor team throughout the construction period until project completion, we noticed that almost 100% of the waste was diverted from general landfill and was re-used or recycled by the organisation Enviro Skip [which is] based in KwaZulu-Natal.’

The contractors were also conscious of the materials used within the structure, making use of concrete with reduced a Portland cement content, and reinforced steel containing 92% recycled content. 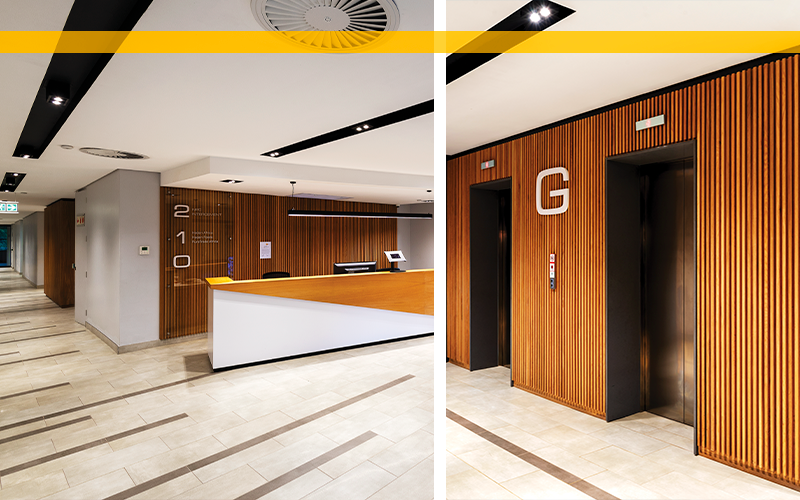 ‘When it came to insulation considerations, we chose a maxi-brick cavity wall construction to allow for a thermal flywheel affect, meaning that in summer the heat doesn’t penetrate and in winter the heat is retained,’ says Gordge. ‘In the east- and west-orientated facades, we detailed double glazing because of the harsh sun, whereas the southern facade has single glazing because it doesn’t get the sun during the day.’ Small apertures on the northern facade protect that part of the building from sun exposure.

As Mbele adds, the properties of the low-e glass used were especially important to allow heat gain in winter. ‘Clear glass has a low heat-transfer value and a low solar-gain number, while low-e glass, with its transparent, microscopically thin coating, improves the heat transfer, making it tougher to get cold quickly,’ she says. ‘This means the HVAC systems could be smaller in size.’

In addition, blinds were selected with a visible light transmission of less than 10%. This limits the amount of daylight glare the occupants are exposed to, making the space visually comfortable. Occupancy sensors placed every 100 m² switch off the lights in the zone if no movement is detected within 15 minutes. 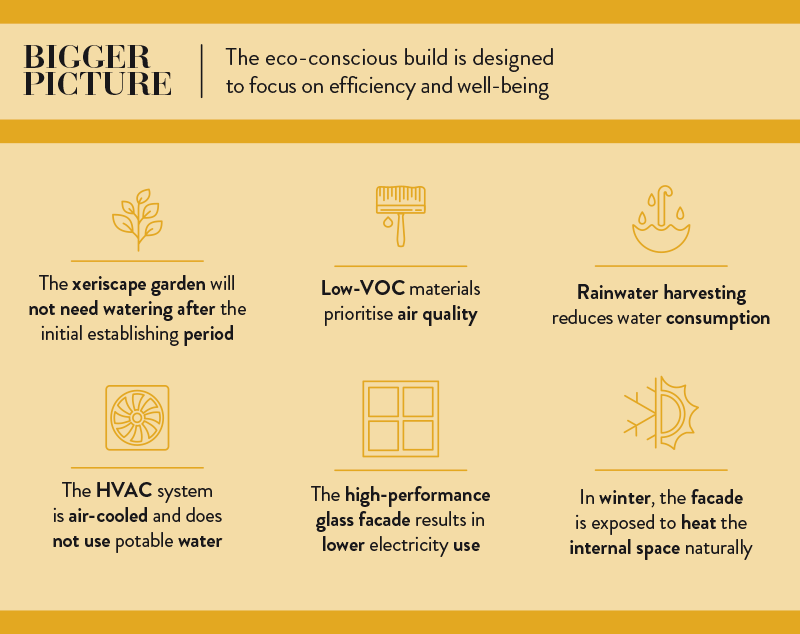 Mbele says indoor environmental quality (IEQ) was the main focus of the development. ‘There are two main reasons why this category is significant in green buildings. Firstly, when you set out to develop a Green Star-rated development, it’s easy to focus only on how to become more energy efficient or to increase your supply of alternative energy. One way to become more energy efficient is to decrease the fresh rate of air that is delivered within the space. However, this comes at the cost of occupant well-being and health.

‘Another way to be more energy efficient is to reduce the size of the HVAC. To ensure the building maintains some degree of comfort, the blinds need high reflectivity, which is often associated with higher transmission of light and glare.’

In short, IEQ interrogates the building’s long-term impact on the people who use the space. ‘This illustrates the building’s contribution to overall sustainability – economic and social,’ says Mbele. ‘People need to feel comfortable and healthy within the space in order to contribute to the business.’ 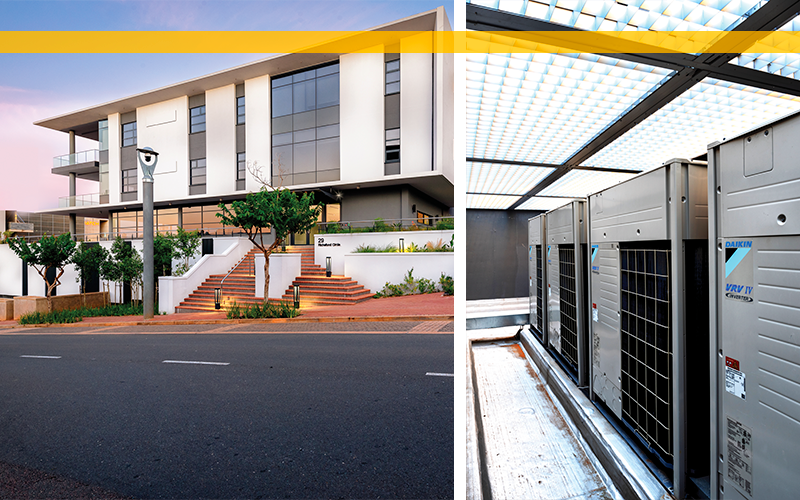 Paying close attention to the materials used in the interior was also key. The 29 Richefond development made use of low-VOC adhesives, sealants and carpets from TAL, Den Braven, Van Dyck and Belgotex to ensure the health and safety of those who spend a large majority of their time within the building. In addition, all fire-suppression systems and thermal insulants used for the development have an ozone-depleting potential of zero, to eliminate any contributions to long-term damage to the Earth’s stratospheric ozone layer.

Those who choose to spend quiet time outside the building are fortunate enough to appreciate the 897 m2 of indigenous landscaped greenery. As Bernice Rumble of Land Art Studio explains, the precinct has a prominent position near the main artery, the M4, which is edged by old, established coastal forest. Over time, developments at Richefond Circle are slowly rehabilitating this coastal forest biome with plantings of appropriate indigenous waterwise trees, shrubs and groundcover.

‘We wanted to create an urban link from the street into the building, offering a natural, integrated progression and connection,’ says Rumble. ‘In a built-up urban environment there is a lot of value in landscaping that encourages people to walk in the secure, controlled precinct.’

Building users are also encouraged to limit their contribution to greenhouse gas emissions by rethinking their modes of transport. To this end, the 29 Richefond building makes preferential provision for alternative fuel vehicles, motorbikes/scooters, and cyclist facilities that include racks, lockers and showers.