As one takes Strand Street out of the Cape Town CBD, heading up towards High Level Road, there’s a point where you cross an invisible but unmistakable line: between the modern city of utilitarian office blocks and glassy high-rises, and the scenic ‘old town’ of De Waterkant with its quaint bars and boutique BnBs. The Bo-Kaap spreads colourfully to one’s left with Signal Hill providing a striking backdrop. Exactly at this fusion of old and new, rises the Mirage.

The building is impossible to miss, filling the prime block bordered by Hudson, Chiappinni and Strand streets. It’s an intriguing, multi-layered amalgam of glass and wood, 16-storeys high but somehow less overbearing than that implies.

The mixed-use development consists of 66 apartments, luxury duplexes and penthouse suites, two levels of retail space, a 63-room five-star hotel – the Capital Mirage – and, to top it all, a trendy rooftop bar and restaurant, with a plunge pool under the stars and stunning views over the city, the harbour and Signal Hill. It also has extensive underground parking.

The hotel, in walking distance from the Cape Town International Conference Centre, attracts corporate travellers, and the Vue Sky Bar is so popular there’s usually a queue of locals waiting to get in on warm summer nights. 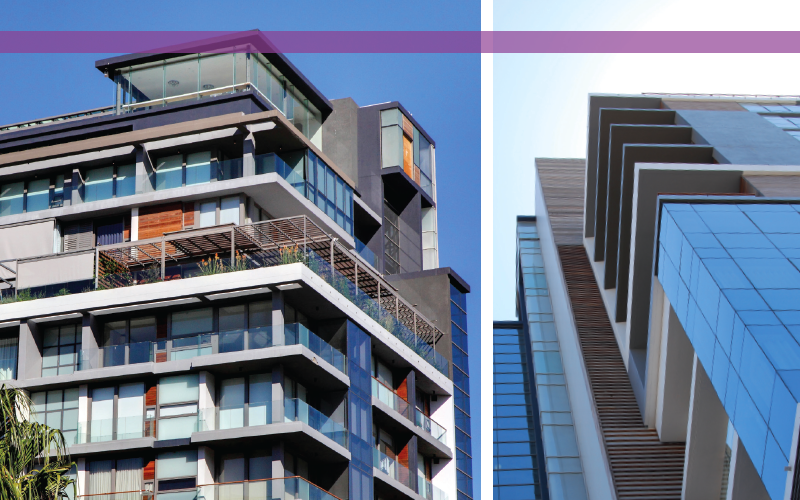 The architecture reflects this varied usage: it doesn’t read quite as a retail building, apartment block, parking garage or hotel. Intriguingly, and oddly coherently, it’s a bit of everything.

The height is distinctive for the area. Sitting right on the edge of the central business district, the building can take advantage of the more relaxed CBD height restrictions, quite dramatically so, compared to its two-storey-maximum neighbours on the De Waterkant side. As the very last building on the edge of the zone, its 16-storeys will always elevate it above neighbouring structures as a landmark; a distinctive feature of the city’s skyline.

It could easily come across as ostentatious and forbidding, but it’s surprisingly accessible – literally so, as pedestrians can enter at two different levels, on Hudson Street and on Chiappini Street.

Because of the marked slope of the site, the building has two distinct ground floors, encouraging pedestrian foot traffic and integration with street life. Cleverly, it steps back as it rises in terraces, planted roof-gardens and glass walls, particularly on the sides facing the more sensitive historical areas, and avoids towering over the immediate environs.

At one point, it was feared that this would not be the case. The building has had a convoluted development history, with stops and starts, changes of developer and changes of tenants.

More than a decade ago, before the current construction began, the site was tied up in a legal battle over the demolition of older, extant buildings. Of course, the area is sensitive, abutting as it does the Bo-Kaap and De Waterkant districts, with their complex historical narratives. Building here, no doubt, was always going to attract attention and an emotional, public response. This was also the location of the Phoenix Hotel, a landmark of old Cape Town built in 1925 that, at one point, was a popular meeting place for anti-apartheid activists.

The idea for the development was first proposed in 2003 but delayed by various funding problems. During 2004 and 2005, civic associations, through the High Court and Heritage Western Cape, challenged the proposed demolitions of the Phoenix and other buildings in the vicinity of Chiappini, Waterkant and Hudson streets. But ultimately, these appeals were unsuccessful, and the development plans were finally approved in 2010. By the time the current developers took over the project, the site was empty. 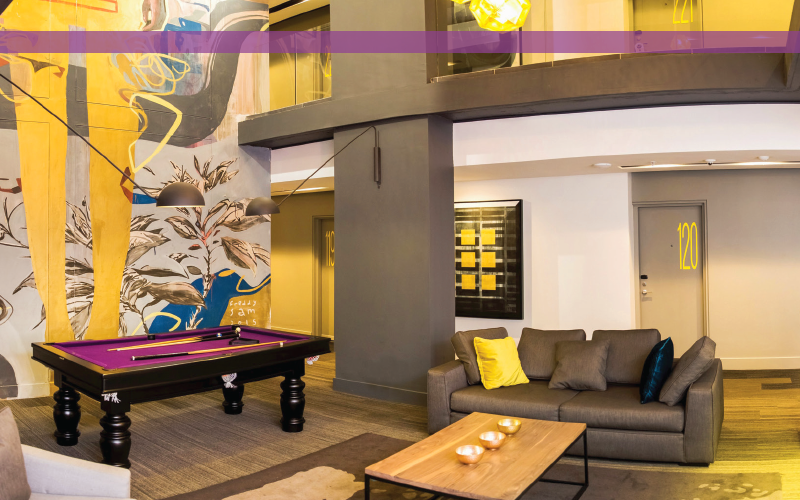 Kevin Gadd Architects, working with Scott Johnston Architects, eventually took over the project after a number of changes to the design and architectural team. Given the history of the project, a vital element of the brief was to integrate the building into its sensitive local environment. Attempts to bring the building into harmonious dialogue with its neighbours are evident. There’s the appealing facade, with its set-back upper levels that soften the bulk of the building. The ground-level restaurants and retail space spill onto the pavement. And with its roof terraces and glass-and-timber detailing, the whole is composed of unusually varied textures, shapes and light effects, unusual for the facade of an inner-city high-rise.

To obtain this effect, the architects were given a fairly free hand to experiment with different forms, says Gadd. ‘We were very lucky with our clients – they trusted us. We were able to use a nice palette of materials: timber, glazing details.’

The architects particularly relished the opportunity to devise a building for multiple, different users with various requirements – hotel, retail and residential – allowing a composite effect, with innovative use of glass, lighting, wooden cladding, pergolas and greenery to bring the building together visually. An unconventional detail is the external vertical circulation: the stairwells and lift shafts have been moved to the corners. The result is a distinctive, lit-up glass corner feature that adds visual interest to the building’s exterior and frees up a dramatically tall and versatile central atrium. 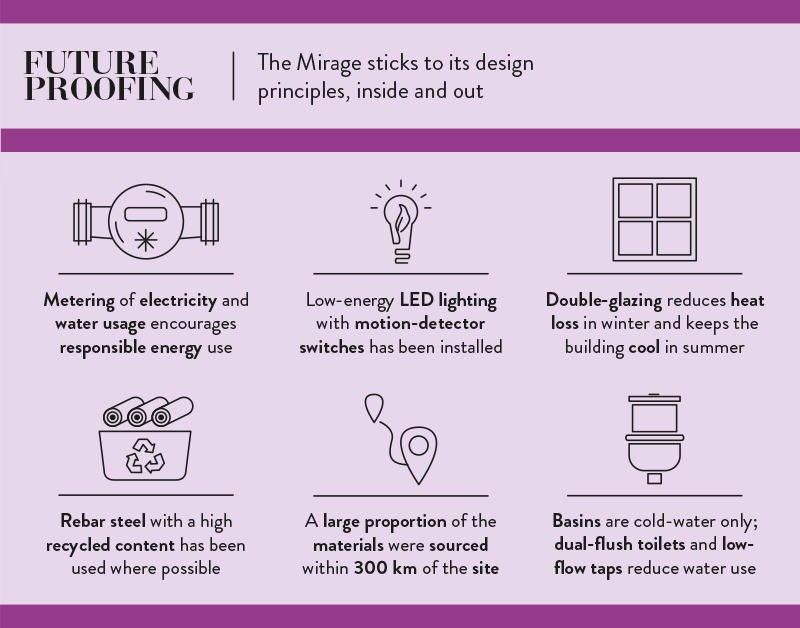 Environmental impact is, of course, intrinsic to a building’s integration into the local environment, and sustainability was a priority for the developers, the Nova Group. To that end, green building consultant Terramanzi was brought on board, and worked closely with the architects and engineers.

The goal was to earn a coveted Green Star rating from the Green Building Council of South Africa. This collaboration resulted in a very respectable 4-star Green Star Multi-Unit Residential Design v1 rating in June 2017.

A plus for the local environment is that, despite rock foundations, it was possible to excavate a very deep and spacious basement – four levels, 15m straight down – meaning most of the parking is unobtrusively hidden away.

Despite bays for hotel guests on another two above-ground levels, the building doesn’t ‘read’ as a parking garage – unlike many of the more intrusive buildings in the vicinity, which are visually marred by a number of large parking lots.

The building is also centrally positioned with quick-and-easy car access from the N1 highway and the city’s public transport network, allowing for lower overall emissions – and space for bicycle storage is also provided. 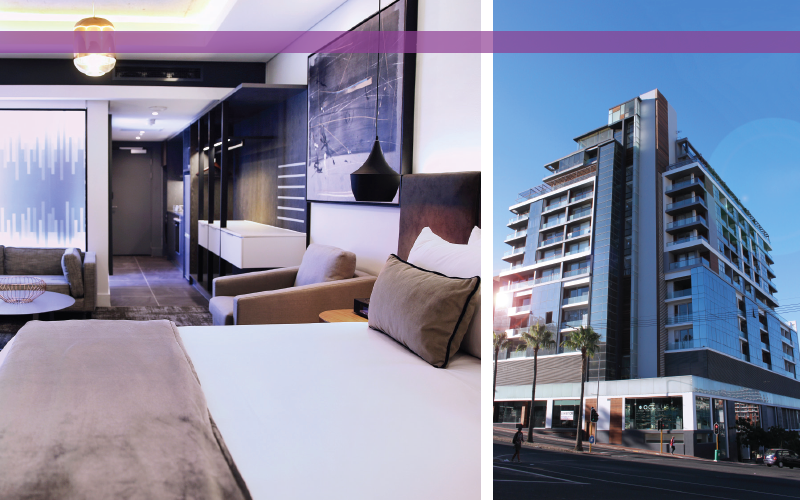 Another important green feature of the building is the heat-exchange system, which uses residual heat from the air conditioning system to heat all the hot water – no small consideration for a building housing an international five-star hotel, where the air con runs constantly.

The building does boast a number of swimming pools, including one on the roof terrace, built before the water restrictions of the last few years became a matter of urgent interest to Capetonians. Gadd points out that a natural stream runs under the building – during construction, a lot of water had to be pumped out of the basement – which may potentially be utilised in future if necessary.

Fabio Venturi, director of green building consultants Terramanzi, comments that the multi-use aspect of the Mirage also has environmental benefits: multi-use buildings cut down on car travel as various destinations are grouped together under one roof; and they ‘allow for higher density developments on smaller footprints, which counters urban sprawl, allows for shared amenities and overall less resource use’.

Despite the site’s somewhat embattled history, it seems the public has come around to embrace the tall new building on Strand Street. Demand for the residential units was fierce, despite the delays in construction. The reaction, says Gadd, has been a vindication. ‘Completely positive. In 30 years, this was the first time I had members of the public – and other architects – phoning to congratulate us. People appreciate the care taken with the details.’ 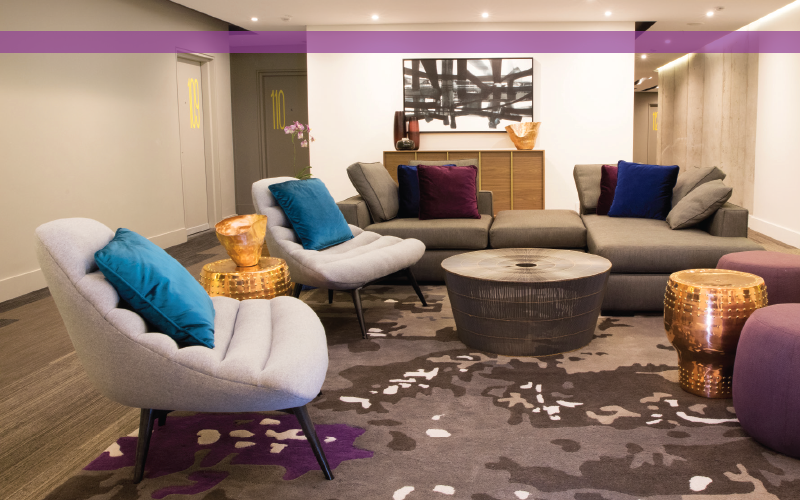 These innovations were rewarded with the 2016 South African Property Owners Association award for mixed-use development. The Mirage, according to Venturi, is ‘a leader in its field and sets the tone for future-proofed and integrated urban fabrics’.

Furthermore, adds Gadd, it’s a building that has been designed to be flexible: during the design and construction process, tenants and their requirements shifted and evolved – and the building was able to absorb the adjustments, with units being combined or transformed as required. ‘It’s a living animal – it can live and change, and it continues to do so.’ We may yet be surprised at the forms this adaptable phoenix-turned-mirage takes in the future.