It’s a clean, bright, crisp-edged wedge of a building. The gleaming facade conveys openness, confidence and smart modernity, despite its relatively modest proportions. It fits seamlessly into the fabric of the ever-growing Waterfall Estate in Midrand, with its mix of residential, office, retail and industrial zones. The new building takes pride of place, in other words, in the largest property development in SA history (or ‘urban concept development’, as it is advertised).

The estate’s CBD, Waterfall City, is also rapidly establishing itself as the hub of Gauteng consulting and professional firms, and the new building is ideally located for access: on a prime site on the corner of Waterfall Drive and Jukskei View Drive, opposite the Netcare Hospital and near the giant Mall of Africa, with major highways and transport nodes (such as the Gautrain station) nearby. 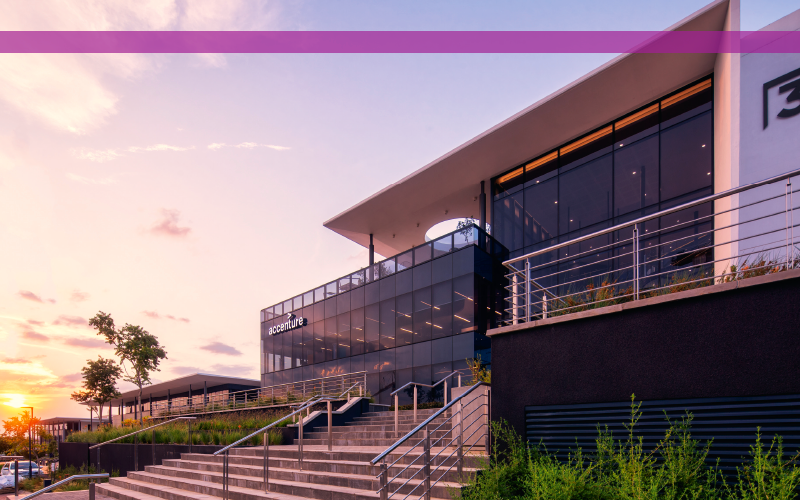 The Accenture building is one of seven corporate premises planned for the office park, which takes up a total of 35 000 m2. The plans also include communal facilities such as a gatehouse, a small restaurant and boardrooms, which will be made available to tenants for conferences and events and landscaped areas.

In the office park development as a whole, there has been a conscious effort to create a self-contained, resource-efficient world that is also in harmony with its surroundings. ‘The park is a precinct in itself,’ says Warren Stanley, architectural director at LYT Architecture. ‘As such, it has an identity, scale and character that is unifying and sympathetic to the landscape. The intention of the designers was to have all tenants benefit from the shared facilities, and in so doing create a community.’

All elements are designed for sustainability and a holistic lifestyle for users. Green spaces connect the corporate buildings, with the restaurant and conferencing facility at the centre of the layout. Alison Groves, regional director of building services at WSP in  Africa, paints an attractive picture of balanced work and play: ‘The buildings surround a landscaped island, which provides a communal space to relax and enjoy a lunch at the café while gazing onto the beautiful indigenous gardens.’

Any new building needs to fit harmoniously into this greater plan, and care has been taken to integrate this one into its context. Within these constraints, however, the architects have found ways to make the building distinctive. ‘LYT’s attention to the architectural language and aesthetic ensured that the park was a cohesive whole, while at the same time affording each building its own identity,’ says Stanley. The three-storey building is more imposing than its size would suggest. ‘Although relatively small in area, the building has been able to achieve a powerful presence on the corner, announcing the entire development in dramatic fashion,’ says Stanley. 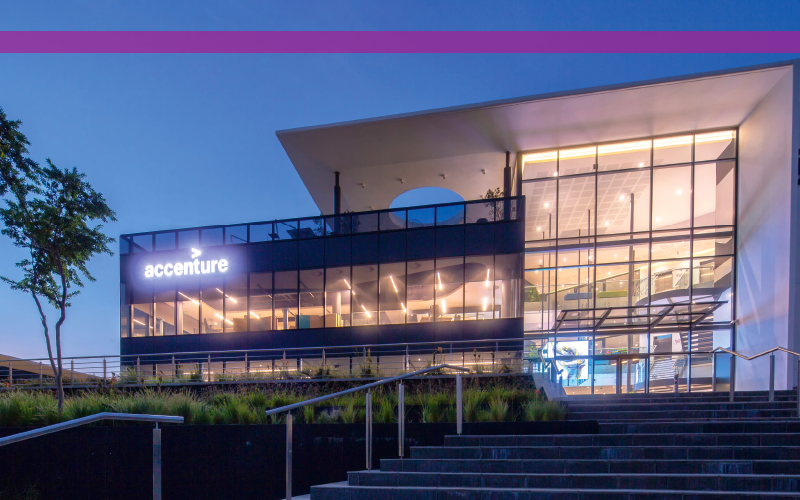 The bold use of glazing lets light into the internal areas and enhances the sense of roomy space. ‘The dramatic views from the sloping facades give the illusion of panoramic unencumbered vistas from the floors and make the building feel larger than it actually is,’ he says. Flexibility and future-proofing the building were central to the design. For the internal planning, the architects drew on cutting-edge thinking regarding adaptable workplace design and employee well-being. ‘The building and interior layout allows for a lot of flexibility and multi-use spaces,’ says Frederik Strydom, technical director at Plantech, the electrical consulting engineer on the project.

The floorplates, for example, were designed to be as open and as versatile as possible. ‘Electrical and IT services are routed through access flooring, with an outlet grid allowing for multiple desk setups,’ says Strydom. Allowing for various functional adjustments in the future, this feature enhances the building’s longevity.

These details required much careful planning and co-ordination of services – especially as this was a notably fast build, according to Groves. But the contractors proved equal to the challenge. ‘The team that I was working with was well conversant with the requirements for sustainability and Green Star, so the design went smoothly. The consultants, along with a superb contracts manager from Group Five, made this project plain sailing,’ she says. 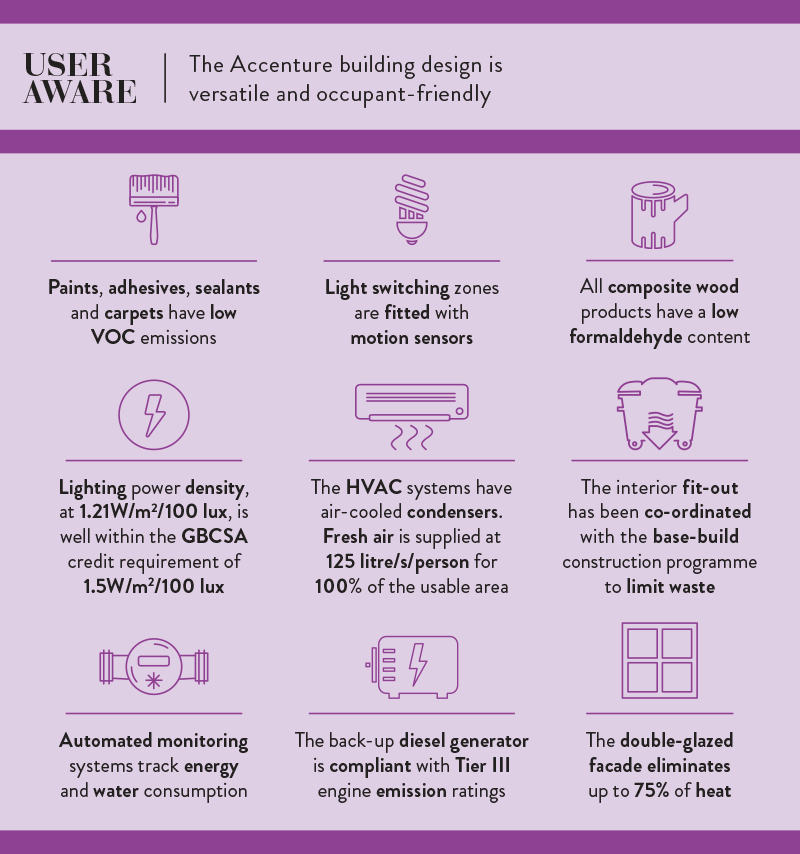 Sustainability is a major focus of the Accenture building, as it is for the whole of Waterfall City. Groves was appointed to provide sustainability input into the design of the new offices, and to ready the building for both a Design and As Built assessment from the GBCSA. The building, like the others in the precinct, has duly achieved a 4-star rating.

LYT’s Stanley is keen to stress that these efforts to increase sustainability are not just about ‘chasing a rating’ as an end in itself. Rather, the star rating becomes a useful means of ‘tracking the metrics’ of a project. The focus is on responsible architecture, operational efficiency and energy saving, in line with current trends in architectural thinking. ‘Sustainable, responsible architecture is at the forefront of the design agenda,’ he says. ‘Architects and developers are embracing the challenge to produce buildings that are not only investment assets, but will also be held up as exemplary buildings for future generations for whom carbon efficiencies will be extremely important.’

Key to the building’s efficiencies are the innovative lighting and energy solutions. ‘The design of the building has taken care to reduce carbon emissions associated with the day-to-day operations,’ says Groves. To passively increase energy savings, for example, the facade consists of highly efficient double glazing, designed to eliminate up to 75% of heat. ‘At the same time, the glass has a good visual light transmittance, meaning that natural daylight readily illuminates the interior,’ she says.

In addition, the lighting installation consists of LED luminaires to ensure ‘soft, glare-free and flicker-free light, high user satisfaction, increased productiveness and less eye strain paired with optimum energy saving’, notes Strydom. The lighting power density is well within the GBCSA credit requirement, while the lighting control zones are fully compliant with recommendations. ‘This control philosophy and equipment selection ensured that the tenant has an easily maintainable control system with minimal energy wastage,’ he says.

A modular metering system was implemented to measure lighting and power use. This sensor-based system ‘provides a lot of flexibility for expansion and has a centralised onboard logger, negating complicated server systems’, says Strydom. A variable refrigerant flow air-conditioning system allows temperature in the building to be efficiently zoned.

Further green credit was achieved with the installation of the standby generator, which produces emissions in line with international best practice. ‘With the number of power outages experienced in SA, the environmental impact of the diesel engine emissions is frequently overlooked,’ says Strydom. Not to be lost among these impressive technical details is the human element. While sustainability features are very important for the long-term viability of the property portfolio, they also improve the immediate quality of life of those who use the buildings. 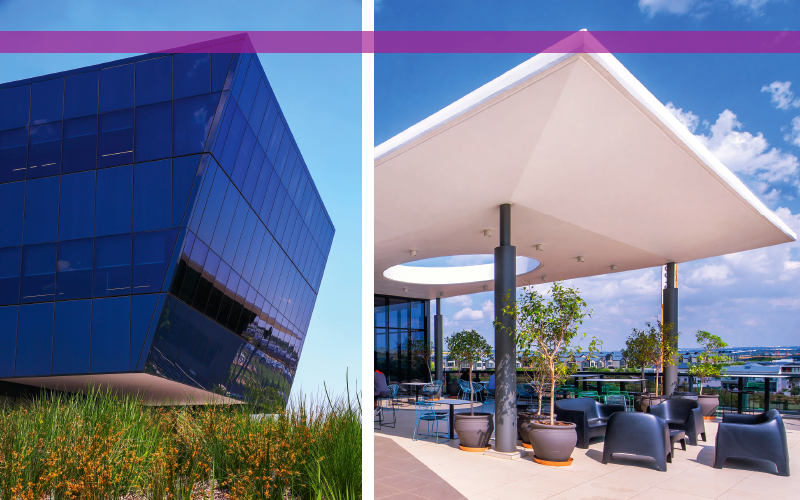 This is a strong part of the ethos of the entire Waterfall Estate. For example, the precinct encourages non-motorised movement, with wide pavements to accommodate both pedestrians and bicycles. ‘The Accenture building supports this principle by providing cycle facilities for both visitors and building occupants that include showers and locker facilities to encourage a more active lifestyle,’ says Groves.

It’s details such as this that help attract quality tenants. The appealing appearance of the new building is just the start of the experience. ‘The aesthetic value of a building is an overt enticement to attract employees. But the less tangible aspects such as high levels of fresh air, exposure to multi-spectrum daylight in the working space and views are perhaps more powerful drawcards for high-calibre personnel,’ she says. In short, architecture that optimises user comfort and health is vital to the success of companies that wish to attract and retain high-end talent. And, as Groves says, ‘companies like Accenture recognise that’.

Jane Molony, executive director of PAMSA, on how paper and its  by-products are a... END_OF_DOCUMENT_TOKEN_TO_BE_REPLACED