Marlenique, an estate owned by Boplaas 1743 in Simondium in the Western Cape, boasts lush fruit orchards, an exquisite wedding venue and – since February 2019 – a state-of-the-art, grid-connected, floating solar PV system that is the first of its kind on the continent.

The floating solar panels installed by New Southern Energy (NSE) on one of the estate’s man-made dams catch energy from solar rays that would’ve otherwise bounced off the water surface, while saving water by reducing evaporation. This dual solution to tackling two obstacles faced by local farmers – stable energy and water scarcity – is something others in agriculture should take note of.

‘Conservation agriculture and regenerative agriculture, and new ways of thinking and operating within these new paradigms, are coming to the fore, with more and more examples of ecologically restorative ways of farming. These farmers are the pioneers of a major shift in farming.’

Since Boplaas 1743 has longevity as a family-owned business in SA, ensuring the farm runs efficiently for generations to come is important to owner and farmer Carl van der Merwe. In early 2018, when the drought compounded problems already experienced with Eskom’s energy supply, he knew they needed to find a new way to operate efficiently, sustainably and cost-effectively. ‘As the oldest family business in South Africa, sustainability is key. We asked: “How can we keep the business running for another 10-plus generations?” The answer was to farm greener,’ he says.

They started with Marlenique, a property in the Boplaas 1743 portfolio, because the fruit farm’s packing facility and cold rooms used more than 60% of total electricity. Their input and direct production costs were escalating more than their sales revenue per year, so direct and running costs needed to be kept as low as possible for the farm to be sustainable. Electricity was the business’s third-highest direct cost, so investing in solar was a no-brainer. Saving water was the next issue. 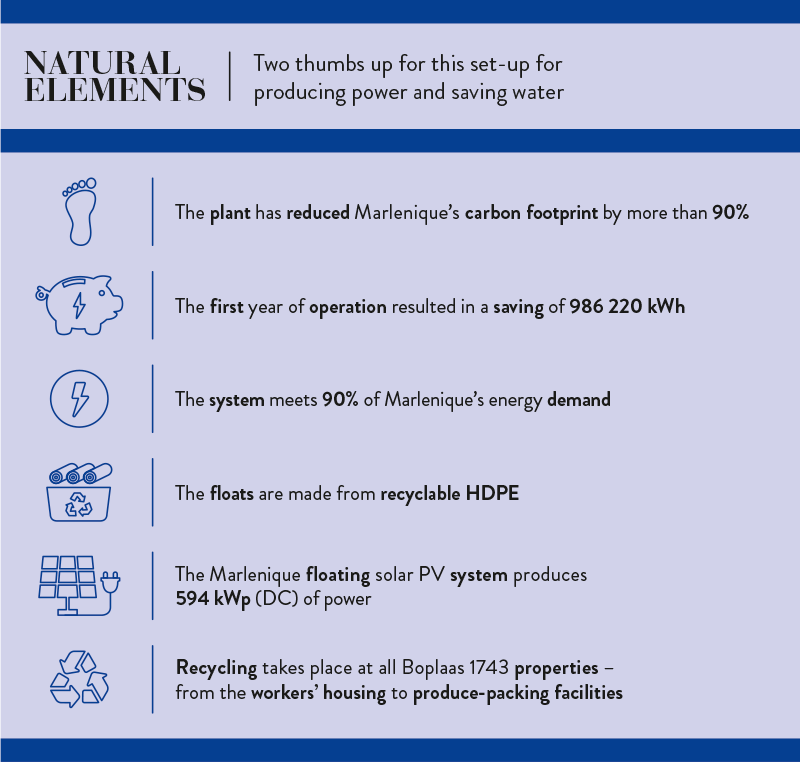 ‘Evaporation was a key factor; so was available land. Marlenique estate didn’t have any spare hectares available,’ says Van der Merwe. ‘I came across floating solar. Do you take productive orchards out and install solar, or do you use your dam to generate the power that’s necessary? It offered the best of both worlds − reducing the evaporation and generating power from land that had one function: storing water. Our energy costs are now fixed for at least 25 years.’

Since water and energy issues are inter-related, this dual function of floating solar is increasingly attractive for sustainability. ‘The benefits of floating solar are relevant for Africa, namely reduced evaporation from water stores; reduced use of agricultural land for PV solar; and improved performance of solar plants on water,’ says Deepak John, founder and CFO of NSE.

In the US, the National Renewable Energy Laboratory estimates that installing floating technology such as this on America’s more than 24 000 man-made reservoirs could generate about 10% of the nation’s annual electricity production. And, in a 2018 report, the World Bank notes that ‘the most conservative estimate of floating solar’s overall global potential based on available man-made water surfaces exceeds 400 GWp, which is equal to the 2017 cumulative installed PV capacity globally’.

Floating PV – ‘floatovoltaics’ − is ideal in densely populated and water-scarce areas where land is at a premium. When solar PV panels are placed on floating structures on bodies of water, they block sunlight from striking the water surface, reducing evaporation and saving water. They provide ambient cooling for the solar modules, boosting power production by up to 22%, and all without having to clear valuable real estate or treat any soil. The temperature of floating modules can be 5˚C to 10˚C lower than those on a roof, which boosts solar module efficiency.

Provided the body of water is man-made, inland and calm, a potentially under-utilised reservoir or dam can become a money-saving energy source. The energy harnessed can be transferred to equipment on land, such as battery packs for storage. What’s more, water-mounted solar panels are less likely to accumulate ‘soiling’ that reduces their effectiveness, cutting down on maintenance, and the shade they provide reduces algae growth and methane emissions.

The site comprises the floating solar and a larger, ground-mounted solar park, which between them have 20 SolarEdge inverters, all connected on the same busbar on a single tie-in point. The floating component includes Hydrelio mechanisms, and the floats are made from recyclable HDPE with a 20-plus-year lifespan. During the installation of the field-mounted plant, water was discovered underground. Overcoming this challenge resulted in another benefit.

‘We installed a French drain solution around the area for the solar PV plant. This water is now collected and pumped back into the dam, saving thousands of litres of water per year,’ says John.

A micro-grid was essential, given the site’s many existing utility connection points. ‘There were nine municipality electricity supply points distributed all around the farm. The micro-grid combined these into one,’ he says.

‘Firstly, instead of nine fixed-line costs, the farm now pays only one to the municipality. Secondly, the PV solar and backup generator can be connected to one point, which feeds all the necessary points throughout the farm. This is better for managing the energy and the renewable source as well as the backup power. There’s one large PV plant and genset for backup. If it weren’t for the micro-grid, NSE would’ve had to install nine solar plants and generators at each supply point for a similar benefit.’ 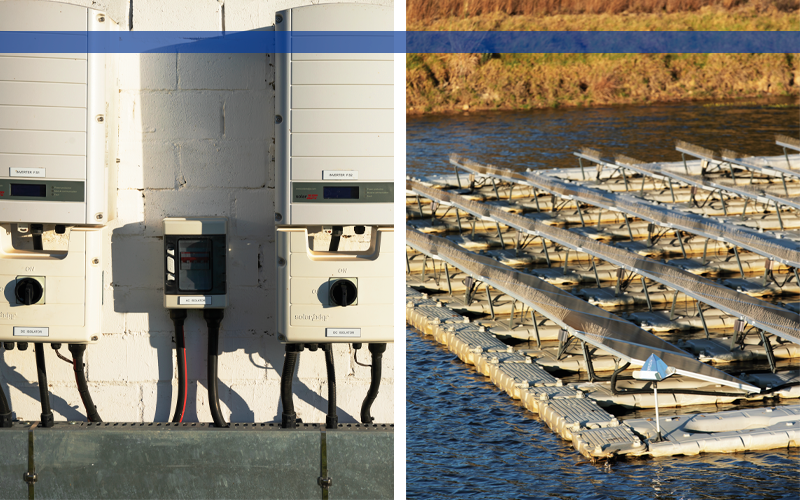 The solar plant provides 90% of Marlenique’s annual energy consumption, yet it is still somewhat reliant on the national energy supplier. ‘From 1 February 2019 until end of January 2020, we were running on 105% green power. Our issue was the lack of sun at night,’ says Van der Merwe.

‘To compensate, we push back kilowatt-hours into the grid during daytime to use at night.’ In the next project phase, battery storage will enable them to be entirely independent. The savings from the system have allowed the farm to operate cash-flow positive from the start while paying off the asset over 10 years. ‘The municipality changed the feed-back tariff in July, so we’re still cash-flow positive but not as much as before,’ he says.

Given the relative newness of floating solar, concerns surround the as-yet unknowns. Does floating solar require more upkeep? How does it impact local wildlife? In terms of upkeep, water actually lessens panel soiling from dust. As the solar installation at Marlenique became integrated into the landscape, fish would rest under it like a reef, and the float became an ‘island’ for local birdlife.

Unfortunately, this meant potentially damaging bird droppings. ‘We installed bird spikes and reflectors on the float to keep them away from the panels, and increased the float size to give them space around the panels to nest, rest or catch fish,’ says Van der Merwe. The set-up does require periodic cleaning. ‘We need to clean the floating more regularly than the ground mount – but that’s after 12 months. Luckily, in the summer heat, there are always volunteers to swim to the panels.’

Every year, the farm saves more water by installing drip-irrigation systems and moist probes. ‘We irrigate only when necessary; as per the plants’ needs,’ says Van der Merwe. Together with Nulandis, they’re testing the first plant-based autonomous irrigation system in SA by SupPlant, a company that specialises in the internet of things technology in agriculture.

‘You can only change your way of operating a business if you know where change is needed,’ says Van der Merwe. For this reason, they use Blue North Sustainability’s integrated strategic management system, Sherpa, daily.

‘Carl uses Sherpa to identify risk areas and develop and manage improvement plans for the farm, giving consideration to the economic, social and environmental dimensions of the farming system that they manage,’ says Farrell. ‘Sherpa is a bottom-up management tool that puts the sustainability agenda in the hands of farmers, so they can really own the strategy and proactively manage the farm towards greater resilience.

‘Farmers are key to a sustainable future. Sherpa endeavours to support them in producing food in a manner that conserves and restores the ecological foundation that we all depend on.’

This floating solar PV project is the first step towards a more ambitious goal – to become 100% solar-powered − to which both NSE and Boplaas 1743 are committed. While irrigation, packing and cold storage now operate off-grid, they want be entirely off-grid within 24 months. Among other things, they’re looking at installing batteries and switching from diesel to electric tractors. Then, it’s on to other properties. 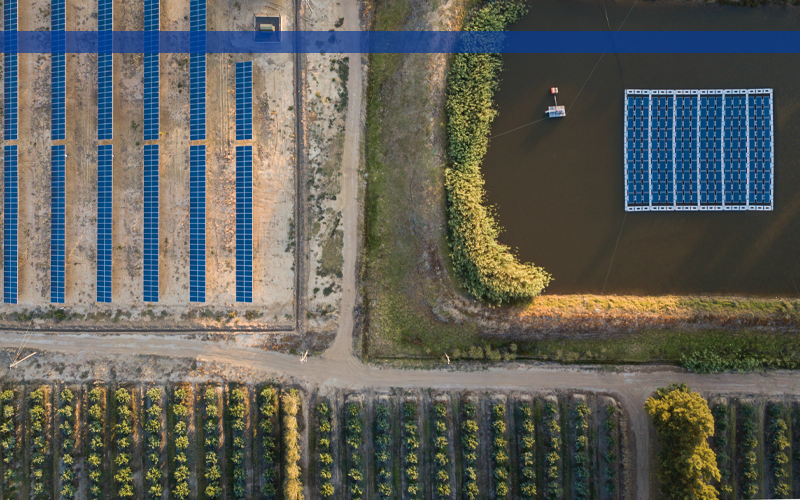 ‘The floating solar plant was installed to assess its performance in preparation for a much larger floating solar plant at another Boplaas farm, where there’s no vacant land,’ says John. The planned project, at Boplaas’ biggest farm in Ceres, should be running by early 2021. After this, according to Van der Merwe, ‘more than 50% of our total business electricity use will be green’.

The Sustainable Agriculture in South Africa’s environmental pillar of sustainability shows how farmers are being encouraged to go green. Regionally, the Western Cape government has urged local businesses to turn to solar by, for instance, partnering with GreenCape to publish a brief on finance and incentive options.

Marlenique’s fully integrated PV solution ‘serves as an important showcase of what can be achieved and the benefits of going this route’, says Farrell. While farmers have to consider these financial potentials against whether municipalities will buy power fed back into the grid, Van der Merwe remains certain of the benefits of solar, arguing that it simply makes financial sense.

‘So, before you plant another hectare, look at the potential return on investment from going solar. It’s a better investment for generations to come.’