Shopping malls, with their large sizes, long operating hours, cooled corridors and well-lit stores, require lot of electricity. So lowering associated costs (and carbon footprint) by using renewable sources of energy is becoming increasingly advantageous. One example is the 78 000 m² Liberty Midlands Mall in Pietermaritzburg, co-owned by Liberty Two Degrees (L2D) and the Liberty Group. The shopping centre boasts a 2 900-panel, R12 million solar PV plant that can supply up to 1 MW (DC) of energy to the mall. The giant grid-tied, roof-mounted PV installation made from premium monocrystalline technology is designed to operate for at least 25 years.

The solar plant aligns with L2D’s strategy of reducing its carbon footprint by investing in renewable energy solutions in its malls to meet the 2030 net-zero sustainability target it has set for its retail portfolio. ‘Harnessing solar energy at Liberty Midlands Mall was deemed necessary for us in light of the world’s urgent need to address climate change,’ says Liberty Midlands Mall asset management executive Brian Unsted. ‘Sustainability is one of the five business pillars we focus on, so solar energy is a big concern of ours.’

L2D chose to install its first solar roll-out at Liberty Midlands because the mall was undergoing an expansion, and it was a good option considering the relatively high regional electricity tariffs and the amount of sunlight the site receives. As Unsted explains, ‘solar is perfect for the retail space as shopping centres operate seven days a week and the solar curve closely matches that of the energy consumption trends, leading to greater financial paybacks and project feasibilities’. 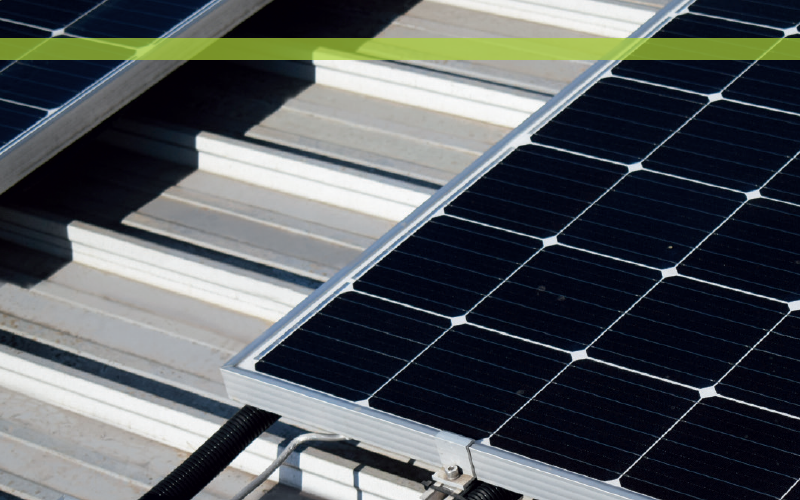 L2D appointed a third-party solar consultant to do a comprehensive study on current solar technology and incorporate best practices into a request for proposal. Specialist solar PV company Solareff – which has installed similar plants at Westwood Mall and Newtown Junction, among others – was awarded the tender. Its brief was to focus on the latest, safest technologies with the lowest levelised cost of energy. Among the latest technologies, says Solareff project manager Marcio Ferreira, are ‘high-performing solar PV modules [designed to work] within Pietermaritzburg weather conditions, monitoring capabilities that enable our operation and maintenance team to monitor on a module-performance level, and safety precautions that include shutting down the solar PV system at the module point of connection’.

OneZero Consulting was chosen as the electrical consultant. ‘Our role was to prepare a due diligence proposal with regard to the power at the newest phase built at the mall,’ according to OneZero project engineer Jannie Boshoff. ‘We were involved in the concept design, and assisted in tendering the work and overseeing the construction to final completion.’

Before construction, the design team worked closely with OneZero to pinpoint potential risks that had to be mitigated. ‘Only certain areas of the mall’s roof were designed to cater for the additional weight of the solar modules, so a change of roof design was made,’ says Ferreira. ‘Fortunately, this didn’t impact on the construction timeline.’ He adds that ‘the size of the system was no easy feat, especially with the Solareff high-quality stamp of neatness, ease of operation and system delivery needed to match’. Achieving this, while meeting the client’s expectations, is something Ferreira is understandably proud of. Of the installation, Boshoff describes it as ‘a nice-sized system to install. [It] was done very neatly and executed as per the intended concept design’. But as with any project of this scale, a challenge that had to be overcome was getting a range of contractors to communicate and work well together. ‘Crossing paths with different contractors within the same space can open up the issue of finger-pointing in the event of something going wrong. But with the Liberty Midlands Mall project, the few minor issues that came up were resolved quite easily due to all contractors holding great integrity,’ says Boshoff.

Unsted agrees, saying that ‘for the most part, the installation went smoothly as a result of good planning and co-operation between the different sets of professionals’. The grid-tied PV system operates in conjunction with the municipal power supply, offsetting the bill thanks to the amount of energy the system generates. As the system’s generating capability is less than the mall needs, all energy produced by the solar plant is utilised. Unsted says the solar energy ‘is pushed straight into the main distribution board via smart inverters, so the entire mall benefits from the solar [energy] produced on the roof. The key to unlocking the full potential of a solar installation is to use all of its energy as and when it becomes available. We didn’t want to constrict integration by allocating the solar to any specific operation’. 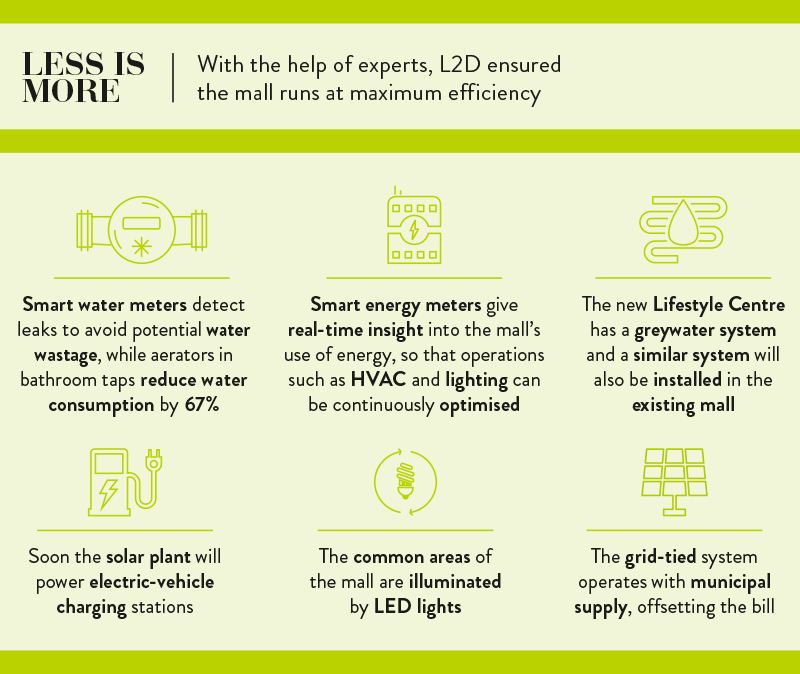 While the PV system is large, it isn’t big enough to take the mall off-grid, ‘and at this scale it didn’t make sense to install an energy-storage solution’, says Boshoff. The mall’s power consumption is greatest during days of trade, so ‘it made sense to have a PV system that would offset the electricity bill as the PV system produces power during the day when the sun shines’. The hours of operation depend on the daylight hours of the season.

Ferreira explains that ‘the solar system is connected directly to the mall’s electrical reticulation to distribute to the loads where needed as if it were municipal power. As a grid-tied system, the mall consumes the solar power generated instantly with no storage. This does have a downside, as the solar system shuts down when the municipality power supply is off, for safety reasons’.

This solar plant is but one example of how L2D is taking its sustainability targets seriously. Specialist sustainability service providers are helping it to reach net-zero ‘on refuse first, water next and then energy, and we’re targeted to achieve these well before 2030’, says Unsted. In addition to further investigating renewable energy solutions, other measures L2D is taking include installing smart meters for energy and water in its malls by the end of the year, and using big data analytics and AI to gain further insight into usage; implementing a policy to remove single-use plastic shopping bags at all of its malls by 2020; installing water-filtration plants (for instance, at the Liberty Promenade Mall in the Western Cape and the Liberty head office in Cape Town’s Century City); and piloting industrial-sized composting facilities (at Johannesburg’s Eastgate and Sandton City malls). ‘Large shopping centres tend to be dense waste nodes, given the amount of consumption taking place,’ says Unsted. ‘Because of this, it’s possible to make a big impact on one large site rather than spreading efforts around multiple smaller locations. A great example of this would be the development of waste-reclamation sites at all of our malls, leading to greater recycling figures and diversion from landfills.’

Should other large malls consider renewable energy solutions such as this solar plant? Absolutely, says Boshoff. ‘With Eskom struggling presently, it’s forecast that energy prices will increase dramatically in the near future.’ Solar can provide retail owners with a better return on investment while supplementing the strained electrical grid. The caveat? Be sure to use experts in the field. ‘There are many contractors wanting to make a quick buck, who sell non-compliant equipment at a reduced cost and take shortcuts wherever they can. Renewable energy is a great, clean means of reducing our carbon footprint when implemented correctly,’ he says.

Unsted’s satisfaction with the project’s end result is proof of the many benefits of going solar. While the solar plant hasn’t been in operation that long, ‘the achieved results to date are exceeding simulations’, he says. ‘We managed to implement a significant sustainability initiative and achieve a compelling investment return. Sustainability is no longer just about “doing good” but rather about deploying funds where it can make a considerable positive impact on the planet, unlocking both financial and sustainable wealth.’

Jane Molony, executive director of PAMSA, on how paper and its  by-products are a... END_OF_DOCUMENT_TOKEN_TO_BE_REPLACED