The brief was for a four-anchor, dual-level shopping centre to be built in the Limpopo town of Thohoyandou, at the junction of the new Giyani Road and the R524 running to Makhado, and the road north to Sibasa. The developers faced obstacles from the start. ‘Bank funding was a challenge,’ says Paul Gerard, MD of Flanagan & Gerard Property Development & Investment, which owns a share in Thavhani Property Investments, which has a two-thirds share in Thavhani Mall, along with Vukile Property Fund. The other shareholder in Thavhani Property Investments is a local company run by Thohoyandou entrepreneurs. ‘Those who did not have an understanding of Thohoyandou found it difficult to understand how a R1 billion investment could work in this area.’

Initially, there was also a difference of opinion between the South African National Roads Agency Ltd and the local municipality regarding the relocation of the town-entrance feature on the R524. As Thavhani Mall was to be more than a shopping centre, says Gerard, it was expected to become a catalyst for the Thavhani City master plan to establish a 27 ha mixed-use urban precinct and introduce new employment and economic opportunities for Thohoyandou residents, and ultimately to become the future economic hub of north-eastern Limpopo.

First, however, there was a 50 000 m² shopping mall to be built. For this big undertaking, Flanagan & Gerard engaged the services of one of SA’s oldest, most established architectural practices. If you do your shopping in Sandton, then you will have had plenty of exposure to the work of MDS Architecture, among which are several reconfigurations of iconic Sandton City including Diamond Walk; the Morningside shopping centre; and the Mall of Africa in Midrand’s Waterfall City. 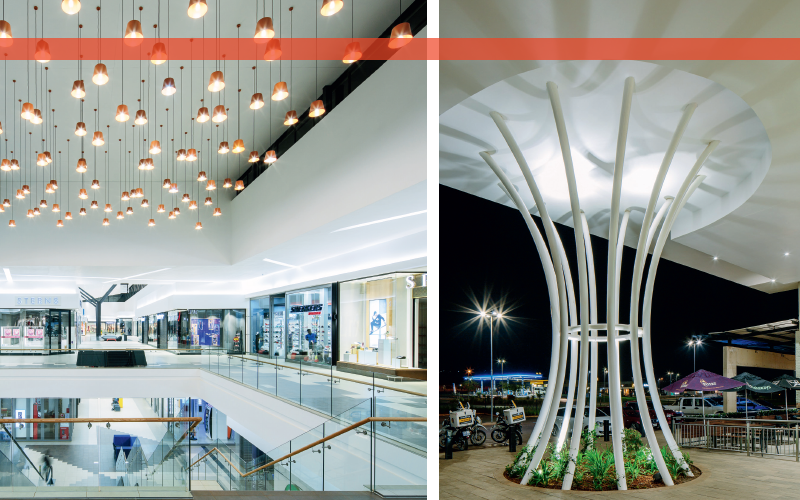 The biggest challenge you face when building a R950 million shopping mall in a far-flung corner of Limpopo province, less than 150 km from the border with Zimbabwe, is its remote location, says Donald McGillivray, MDS partner and project architect on Thavhani Mall. ‘We had to factor in sufficient time to procure and get materials to site, and appoint sub-contractors who could work in such a remote location.’

The land transfer took place in June 2015, six years after local businessman Khosi Ramovha (of Thavhani Property Investments) first conceived of a vision for how a major mall might shape development of the region. When little more than one month later the mayor of the Thulamela local municipality, Grace Mahosi, turned the ceremonial first sod to mark the start of construction, Ramovha called it ‘a historic day not only for me but for the area, as our vision is going to be a reality’. Reality arrived in August 2017 when local shoppers and neighbours from surrounding towns and villages gathered to give an overwhelming welcome to a world-class shopping centre right on their doorstep.

Among the things they encountered were, at each of the five entrances, an abstract structure holding up a high-volume canopy. If the outward-curving ‘branches’ reminded them of the shape of a baobab tree, this had been precisely the intention. ‘The baobab tree is endemic to the region where the mall is located, with this giant tree acting as a traditional gathering place providing shade from the harsh sun,’ says McGillivray. Once a symbolic meeting place for kings and elders, the baobab remains a venue for community meetings and even classrooms. In resembling shaded sculptural baobabs, the entrances therefore communicate the concept of pause and gathering. 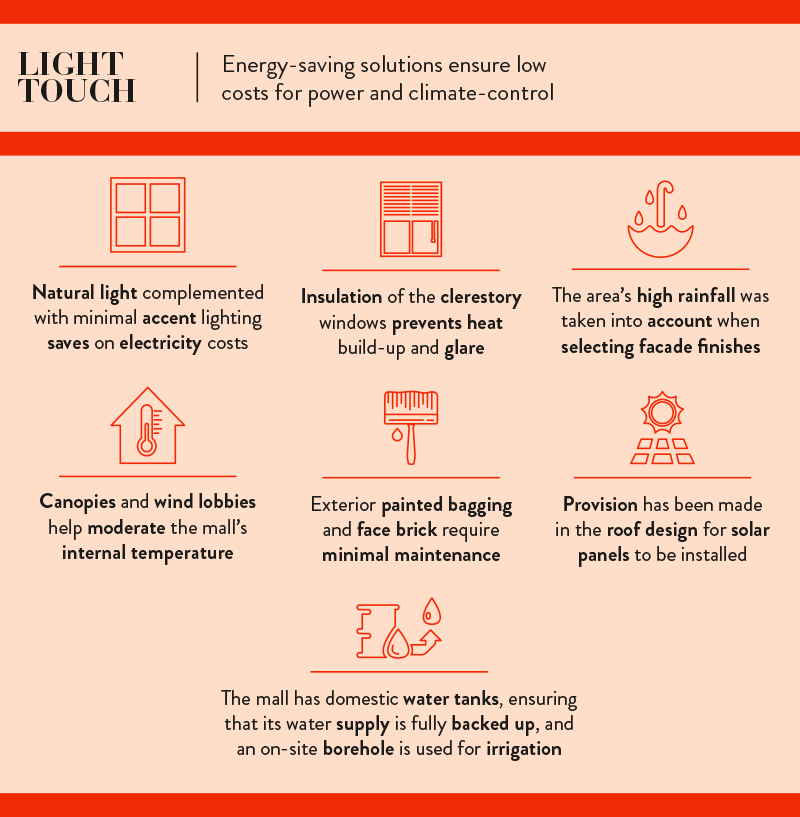 At each entrance, a colourful wind lobby extends the welcome. The design references in the coloured vinyl lobbies will depend on your point of view. For some, it will evoke the signature work of Dutch painter Piet Mondrian, who narrowed down his formal vocabulary to the three primary colours (red, blue and yellow) and the two primary directions (horizontal and vertical). It may remind many of the area’s colourful vernacular artwork and fabrics. However, the interior design employs a monochromatic black-and-white palette.

Sunlight lets the colours flow into the building during the day, and at night it glows. By contrast, the structure’s exterior is finished with painted bagging and face brick in earthy tones – selected for ease of maintenance given the high humidity and rainfall in the area, explains McGillivray. Natural light pours in through the clerestory windows that wrap around the high-level perimeter of each of three double-volume main circulation courts. This is complemented by accent lighting that helps establish each court’s unique aesthetic theme. In the Edgars court, light features made from upturned terracotta pots evoke the rich tones of the fertile red loam soil most often found in the Vhembe district; the custom-made light fitting in the Woolworths court is made from Consol jars; and in the central court, tube light fittings play up the height and scale.

The mall’s floor incorporates a pixellated leaf pattern as if a strong wind has made the abstract trees shed their leaves, and there are accents of earthy browns and greens throughout, along with mall furniture in the same cheerful colours as the lobbies. Thohoyandou has mild winters and fierce summers, with temperatures soaring as high as 50˚C. The interior is therefore climate-controlled; massive canopies provide generous shade and help keep the internal temperature of the mall constant and efficient, according to McGillivray. ‘Insulation has been carefully planned along with natural lighting in the building, which serves to reduce power requirements for artificial lighting,’ he says. Well-insulated clerestory windows on the south side also prevent heat build-up and glare. The roof design provides for the future installation of solar panels to further reduce power requirements. An on-site borehole provides water for irrigation but has a shut-off valve that can be opened if municipal supply is disrupted and water storage tanks run dry. Back-up generators ensure that the lights at Thavhani Mall will keep shining. ‘Customers in the region prefer to use cash,’ says Gerard, with queues for banking ATMs a common sight during peak times in Limpopo. The positioning of ATMs at the mall is one of the ways in which the design has taken local consumer patterns into consideration. McGillivray explains: ‘ATMs are located outside the shopping mall with ample shade and screening, so that patrons are able to queue outside the mall and avoid impeding the entrances during peak times, with additional in-branch ATMs inside the centre.’

In June 2019 MDS Architects added yet another accolade to their trophy cupboard when it was announced that Thavhani Mall had won the South African Property Owners Association (SAPOA) Award for Innovative Excellence in Property Development, in the category of Best Rural and Small Town Development. SAPOA recognised Thavhani Mall for ‘bringing world-class shopping’ to a bustling Limpopo town, noting that it combines ‘style and convenience with almost 140 shops, restaurants and service outlets to service the community’. And so it does, but there are also other ways in which to measure success. 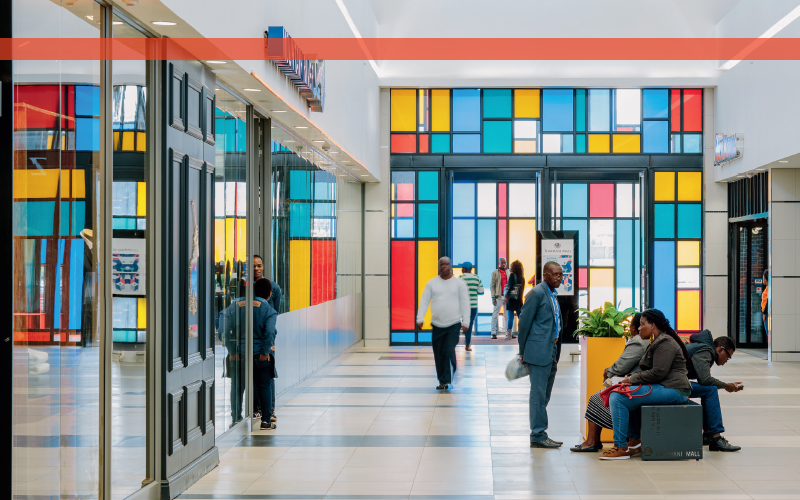 Gerard mentions that around 2 000 jobs were created during construction and that the mall now employs about 2 500 people, most of whom are from the local community. Thavhani City has already started taking shape around the mall, including an outdoor gym, a taxi rank, which opened last year, and a new bus route under construction.

With the option of a further 20 000 m² extension incorporated in the existing design, the community served by Thavhani Mall has much to look forward to.

Jane Molony, executive director of PAMSA, on how paper and its  by-products are a... END_OF_DOCUMENT_TOKEN_TO_BE_REPLACED