The height of 1 Park Lane is – frankly –imposing, walls of glass soaring elegantly, effortlessly above the cut-and-thrust of surrounding Sandton developments. Yet ideally for the headquarters of an anchor tenant such as Bidvest Bank, it also conveys a sense of reassuring solidity – for the 20-storey main tower is anchored against a lower one, in what’s become something of a signature for Paragon Architects: the twin-tower concept, which allows maximum access to natural light. And this development has a third level too, creating a cascade effect enhanced by the almost spray-like striations of the fine aluminium cladding fins that curtain the lower nine levels.

Katherine Towers, a prime-grade development with a 23 000 m² gross lettable area, is a natural addition to a portfolio that has grown Paragon into one of the biggest design practices in Africa. It includes the likes of 140 West Street, the GE Africa Innovation Centre, Alice Lane 3 and Sasol Place in Rosebank – a portfolio recognised at the South African Property Owners’ Association Awards; the South African Professional Services Awards; Construction World’s Best Project Awards; and by the AfriSam-South African Institute for Architects Awards for Sustainable Architecture and Innovation, as Paragon is passionately green. 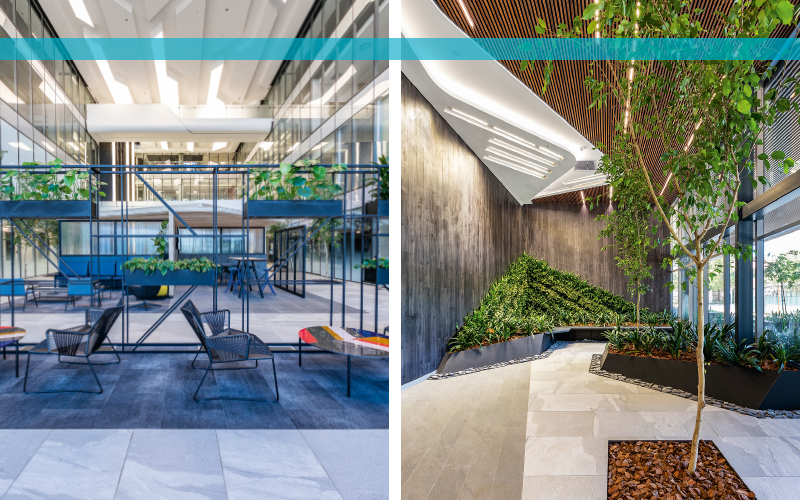 Its designs constantly push architectural and technical boundaries, and Katherine Towers does it again. As Kay Hausler, senior project architect on 140 West, puts it: ‘Paragon has developed a system to make the most efficient buildings that are highly diversified, while looking like a whole from the outside. Each floorplate can allow for open plan, but can also be split into smaller cells.’

And the design brief for 1 Park Lane, says Paragon Group senior architectural technologist Dhiraj Ramsaroop, was ‘to create a building with highly flexible office space that could accommodate tenants with varying space requirements. The floorplates for the offices are located around two central cores that enable the building to function efficiently, while allowing all tenant requirements to take advantage of the panoramic views around Sandton. The building also caters for private terraces for the tenants. The design team took advantage of the building’s height and maximised the views to the north and south. This was achieved by using floor-to-ceiling glazing with no spandrel panels and sills’. 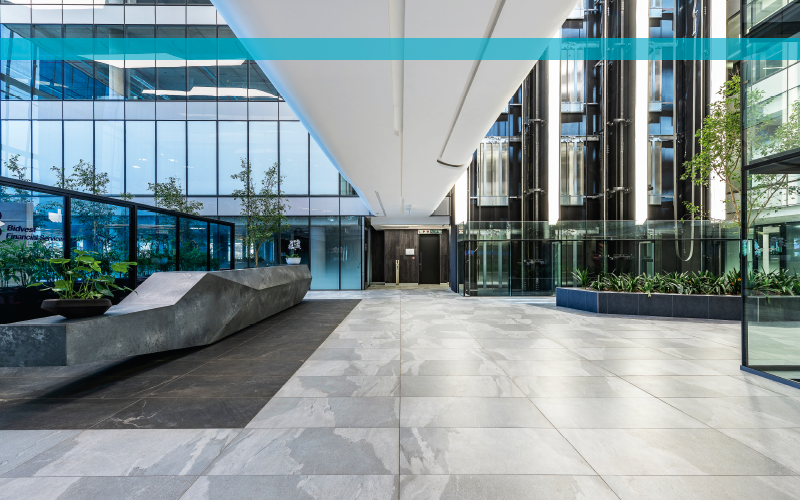 A challenge before any of this could begin was access to the site. It was addressed by the creation of a new road – Park Lane for which the development has been named – along with spacious boulevards inviting pedestrian access. This was possible because of its location. Flanked by Katherine Street and Wierda Road West, it’s set slightly apart from the pressured core of Sandton, while still within comfortable walking distance of both Sandton City and the Gautrain Station, reducing the need for personal transport and supporting its green ethos.

There was an existing building on the site, a low-rise office development that needed to be demolished. But it proved another advantage from a green perspective, as it made this a brownfield site, and avoided the developers having to impact a natural land area, says Mlondolozi Hempe of PJCarew Consulting, the project’s sustainability consultant. It also meant services were in place. Anchor tenant Bidvest Bank was closely consulted from the outset, and the floorplates from reception to the fourth level were designed for its particular needs, says Ramsaroop. The other prime design driver was the parking. Rather than accommodate this underground, the design incorporated nine floors of parking above ground, accessed from Wierda Road West, and catering for 1 000 bays as part of the building design, with up to 11 floors of office space rising above it. 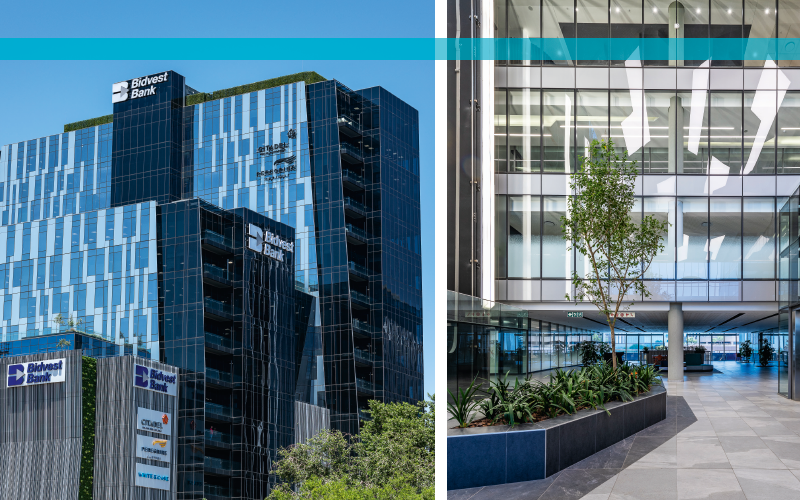 ‘The biggest challenge for the design team was how to design a seamless building and not have a break between the parking levels and office plates, with the external facades,’ says Ramsaroop. The parking areas also needed to be naturally ventilated to the level required by the fire department. This was achieved by cladding them with custom-designed 38 mm by 40 mm aluminium fins, powder coated in different shades to create a variation in the design. ‘The fins are one of my favourite features,’ he says. ‘The implementation from design to built product exceeded all expectations.’

A further facade caveat was that a percentage of the east and west facades needed to be solid, to provide for temperature regulation in the building. The Paragon solution was again innovative. ‘These facades have been treated with A2-rated aluminium composite panels [ACPs] within a unitised facade system to reduce the quantum of glazed exposure in the building,’ says Ramsaroop. This ultimately has an effect on heating, ventilation and air-conditioning efficiency. 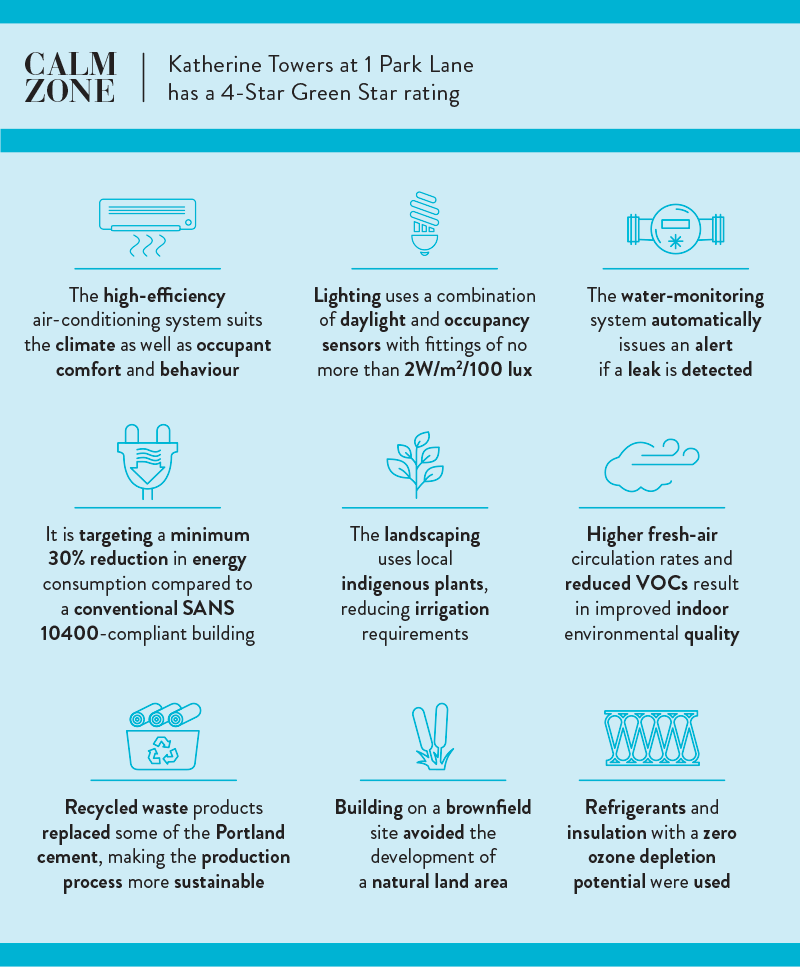 The design around the ACPs was done using the latest technology to identify the facade hot spots, and ‘by programming scripts to generate random patterns within the facade based on an percentage amount of “solid” [ACPs] required’, as he explains it. ‘These initial designs were then further rationalised to accommodate the unitised facade structure. A unitised facade maximises the structural requirements of the design while also containing costs.’

Considerable effort went into sourcing a type of glass that appeared identical in both single-glazed and double-glazed versions, to achieve a seamless look throughout. This entailed extensive research into all the available options, he says, until the right product was found. It was worth it. The main entrance to this beautiful building is on Park Lane, into a soaring common lobby and reception area with a coffee shop – a serene space in shades of grey and blue, lit by an occasional splash of colour in a sunshine-yellow ottoman. The clean, contemporary lines of the furniture and planters are offset by a profusion of plants and trees, giving a sense of rootedness and calm. 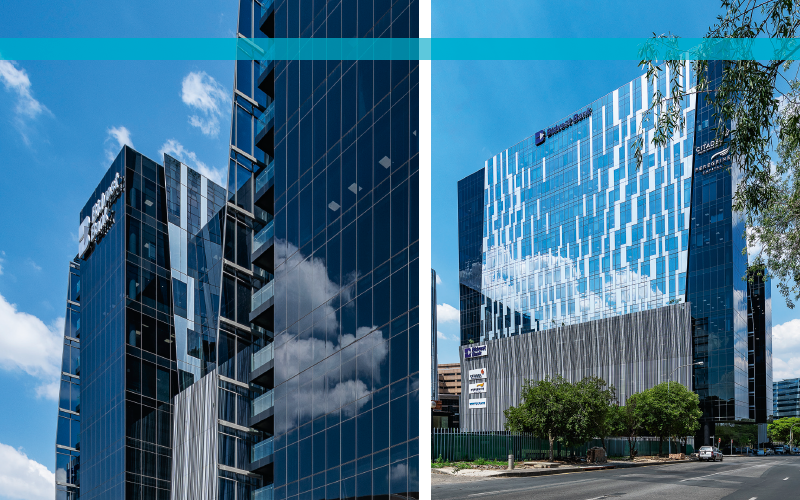 The power behind the greening is Karen Marais of the Ochre Office, who also teamed with Paragon for 140 West. ‘The Katherine Towers brief was adjusted a number of times through the lifespan of the project,’ she says. ‘At the outset, both client and architect had designed for a multitude of outdoor and indoor green spaces, envisioning that the user of the building would encounter plentiful garden edges throughout the levels. As the project developed, adjustments were made to suit tenant requirements, feasibility, practicality and budget. But we kept as much natural greenery for the terraces, facades and street edge as could be accommodated.’

There were two complications, says Marais. ‘First was the introduction of triangulated green walls in the ground-floor lobby at a late stage of the project – the angles and the lighting requirements made for an interesting dilemma. The only way to solve this was to get the right minds together and ensure well-managed co-ordination. Life Indoors was able to give us the basic layout and requirements for the installation, and then it was up to the contracting and professional teams to make it all work and ensure the successful installation of waterproofing, structure, services, lighting, reticulation system, planting and finishing framework.’

The second issue was the sheer logistics of getting material to the upper levels: ‘We had landscaping on the reception, first, fourth and fifth floors above the basement levels. This fell to manual labour. Much of the fill and the planting had to be lugged by hand to the various levels – an outstanding job done by Life Landscapes and Life Indoors, a committed team.’ 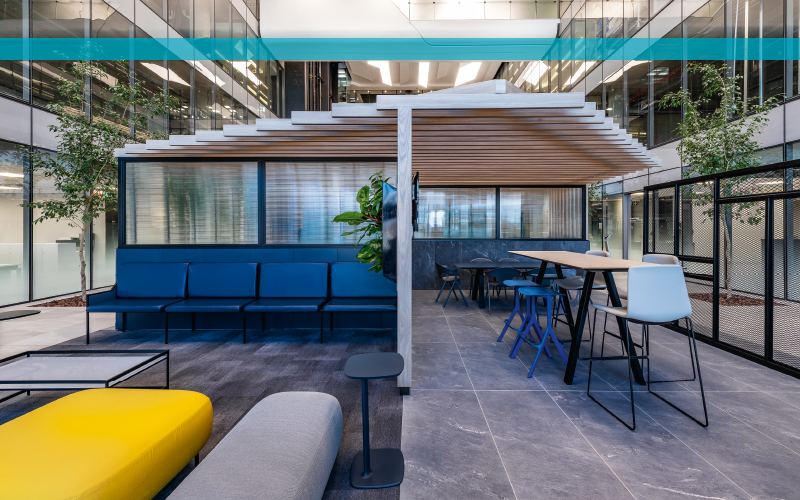 Marais’ favourite feature, like that of most visitors, is the interaction of the plantings with the street. ‘The architect wanted to bring a fresh look to the pavement edge while still remaining within the urban design guidelines of the precinct. Together, we managed to wrap planting around the north and east of the building, the eastern passage becoming particularly unusual as the building cantilevers over the shaded and greened sidewalk. This street interface is an innovative gesture that certainly brings a fresh and green outlook to urban edges.’

The green consultant agrees. ‘Katherine Towers has been designed to provide a comfortable, healthy and productive working environment,’ says Hempe, and it goes the extra mile. ‘Its environmental strategy encompasses transport, through its site location; health, through high fresh-air circulation rates per person, natural daylighting and reduction of harmful VOCs; energy, through everything from the energy efficiency built into the building envelope to the provision of bays for electric vehicles and storage for bicycles; and water, through reducing consumption by using monitoring systems, efficient fittings and indigenous landscaping,’ he says. ‘Waste strategies were implemented right from the construction process and extended to having dedicated storage areas for separation and collection of recyclable materials.’