The striking building spreading its great glass wings at the entrance to Rosebank is one of Growthpoint’s most ambitious properties yet. Number 144 Oxford Road offers 36 700 m² of premier office space on a site the size of five football fields in the corporate heart of Joburg, but sits oh-so lightly on the landscape, reflecting the leafy residential suburbs that surround it, and embracing the company’s green ethos.

‘We have the largest portfolio of Green Star SA-rated properties and green buildings in South Africa, and resource efficiencies form a major part of our strategy,’ says Paul Kollenberg, head of asset management for offices at Growthpoint. ‘In this way we create places where businesses can thrive, and which are integrated into the urban fabric around them.’

To deliver this one, it partnered with Paragon Architects, whose mission is ‘to provide real quality of life and contribute to a better future in better cities by thinking long term and driving quality decisions’. Together, they have delivered a 5-star Green Star Office Design v1.1 building that inspires design and is poised to soar in a post-pandemic world. 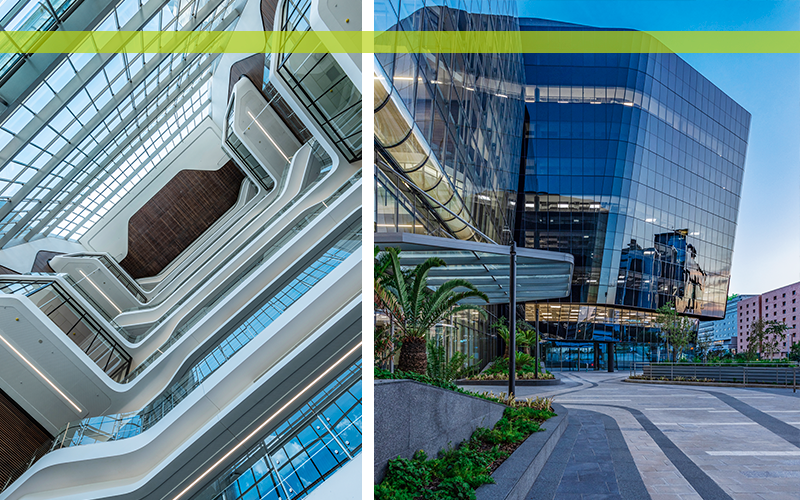 The brief for 144 Oxford, says lead architect Taz-Wynne Superman, was ‘a work in progress over a period of years’, as the building typology changed from mixed use (hotel/retail/commercial office) to commercial office. ‘We were challenged to provide P-grade office space that would compete with the surrounding buildings in Rosebank and Sandton and be a 5-star Green Star-rated building. We set out to design an iconic building that acts as a gateway to the Rosebank precinct, but at the same time taking cognisance of the residential suburbs around it.’

Along the Oxford Road edge, the building makes its statement in two elongated office towers with their facades forming curved glass pinnacles that cantilever outwards to the road. They are linked by a breathtaking nine-storey-high central atrium uncluttered by columns of any kind, a feat of engineering daring. It’s strung with suspended meeting pods for additional visual drama and is clad in part with natural timber for warmth.

On the eastern side, the architects introduced upper-floor terraces at the back of the building and a landscaped berm, ‘in acknowledgement of the low-rise residential fabric bordering that edge of the site’, says Superman. All this comes together to create a building that makes a bold statement, but brought challenges at every step, starting with construction. ‘Both the Gautrain station and Oxford Road had servitudes that impinged on the site and needed to be accommodated. This contributed to a long and intensive design process that considered site-specific parameters together with stakeholders’ particular requirements.’

Superman and his team’s most epic challenge, however, was the atrium. ‘It spans over 24m without a column supporting the overhead structure. This was a complex matter overcome by us working closely with the structural engineers, mostly using building information modelling software for the design and the installation of a steel girder spanning the entire length.’

Michael Bennett, structural technical director at Sutherland Engineers, takes up the saga. ‘The atrium-roof support structure spans between the two towers with tension rods supporting the hanging nine-storey glass-curtain wall and four hanging steel-framed meeting pods. The support girder had specific camber requirements to deflect in place as the load from the construction sequence continued to be added. At each stage of sequential loading, a survey was conducted on the steel structure to compare the anticipated movement with theoretical design values.’

The design required a 3m-deep girder spanning 24.5m with H sections as top and bottom cords to limit deflections, he says. ‘The resulting weight and the pre-assembled pre-camber requirement created challenges in installation.’ A 180-ton crane was used to lift the 11-ton girder from Oxford Road and move it 55m to the final position, requiring special road closures. 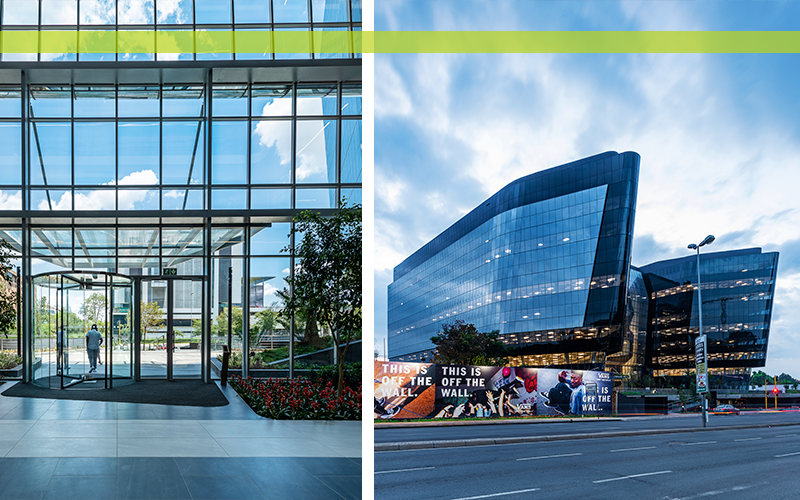 There were other structural challenges too, in the cantilevered ends of the office tower wings. ‘They comprise columns on an unconventional grid and orientation, sloping at different angles as the frame unfolds upwards and outwards, the final frame resulting in a 13m cantilever from ground to roof,’ says Bennett. ‘The complex concrete frame called for intelligent reinforcement detailing on the slanted columns, splay columns, and tie-back steel to brace the structure back to the cores. In-depth frame analysis was required to understand long-term movement due to the “leaning” nature of the building, as well as it being placed on several transfer beams.’

Through it all, green practices were paramount. Overseeing them was Yovka Raytcheva-Schaap, an associate in environmentally sustainable design consulting and project management at Zutari. ‘Defining the sustainability strategies of a project is a collaborative process involving the entire project team from the inception,’ she says. ‘With 144, the intent was clear – the building had to be designed for optimal energy, water and materials use but, most importantly, to enhance occupants’ health, well-being and productivity. 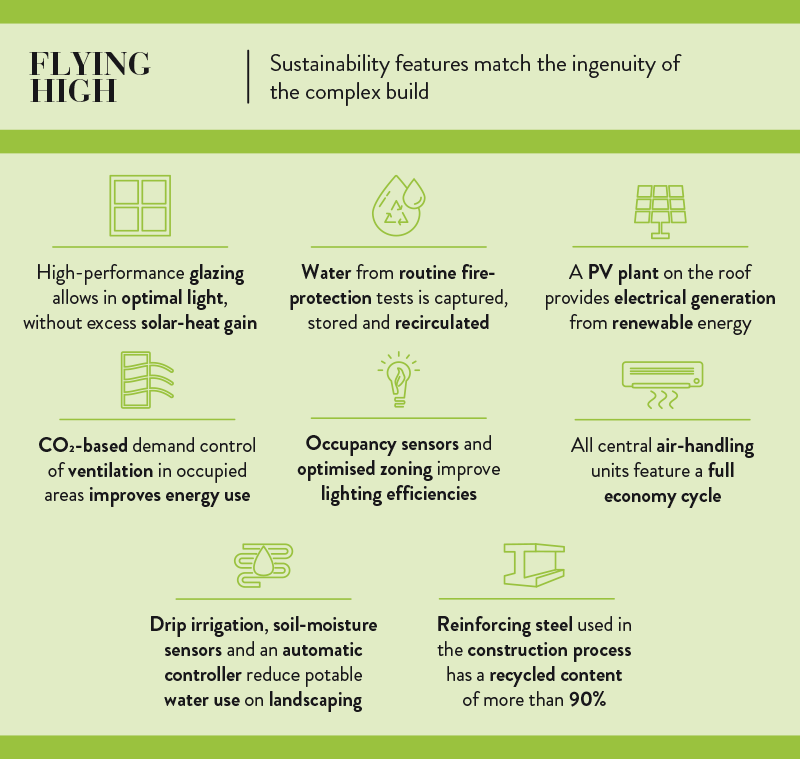 ‘Ample amounts of fresh air and natural daylight, optimal thermal, acoustic and lighting comfort and the expansive views over Johannesburg, the largest man-made urban forest in the world, are some of the building characteristics that make it welcoming to any occupant. Sustainable heating and cooling were also key, informing choices and treatments of all materials, and bringing challenges of their own.’

The main facade features a double-glazed unitised facade, while the outermost facade on the northern side features an offset glazed ‘skin’. The high-performance glazing used on the project had to be factored into the cooling load. It was coated and baked with a variety of chemicals to reflect heat, so while it allows natural light to enter, heat wavelengths are reflected back out of the building. There was no laydown area available on the site, so all facades were prefabricated off-site then installed immediately on delivery, which had to be tightly planned and co-ordinated.

One of the key sustainability features was the air-conditioning system, based on four 800 kW CIAT chillers. These have variable-speed condenser fans for increased energy efficiency, supplying water at 6°C, which is returned to the building at 12°C. A major contributor to the building’s optimised energy performance is that dampers on the air-handling units can shut off the return-air flow if the external ambient conditions are such that the temperature is below that of the return air, which typically provides the most benefit between 12°C and 18°C. ‘This allows for natural cooling of the building, taking advantage of the ideal Joburg climate in winter, spring and autumn, and on cool summer mornings,’ says Raytcheva-Schaap. 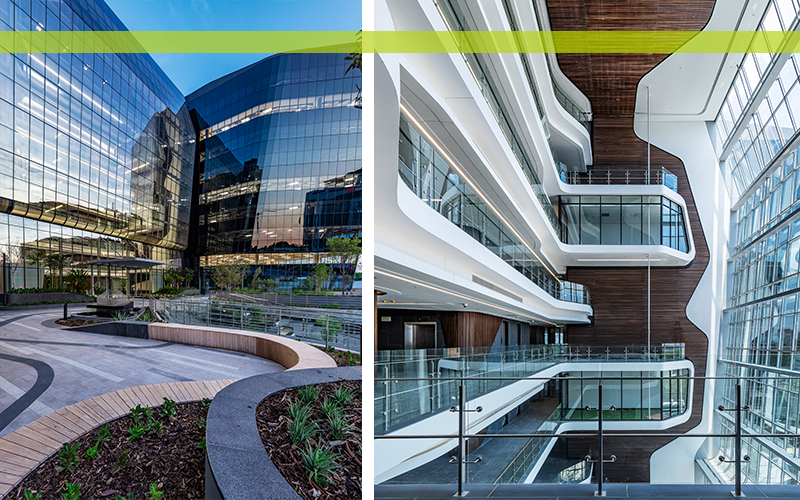 A particular innovation developed by Zutari detects refrigerant leaks from the air-cooled chillers, using a mechanism that deploys weighing cells connected to the building management system (BMS), to monitor the weight of the chillers, picking up even a minor leak. ‘This limits the environmental damage caused by refrigerants that have ozone-depletion or global-warming potential,’ she says. Another ‘first’ was using Siemens intelligent valves, which can be accessed by an app to determine energy consumption, flow rate and valve positioning. ‘There’s also BMS-addressable energy-efficient lighting throughout, water-saving sanitary fittings, a rainwater-harvesting system and water-efficient landscaping.’

The landscaping of 144 Oxford fell to Karen Marais, director of the Ochre Office. ‘Our brief was to reflect the bold lines of the architecture, creating interesting and inviting outdoor spaces on the podium level – where workers can enjoy their lunch breaks, rest and reset – surrounding and interacting with the groundfloor interiors. The planting needed to be completely waterwise and tolerant of the Highveld extremes.’

These were challenges in their own right, and Marais added some of her own, ‘complicating a rather simple paving design’ by introducing snaking lines of hard-to-source granite as accent patterns that cut into the design.

The bermed areas on the southern and eastern edges were particularly tricky, as they were installed completely over the basement slab above the development’s six levels of parking. ‘The aesthetic offered by greening these edges was undeniable, blending with the low-rise residential fabric bordering the eastern edge of the site, but the loading of the structure below couldn’t be accommodated,’ she says. 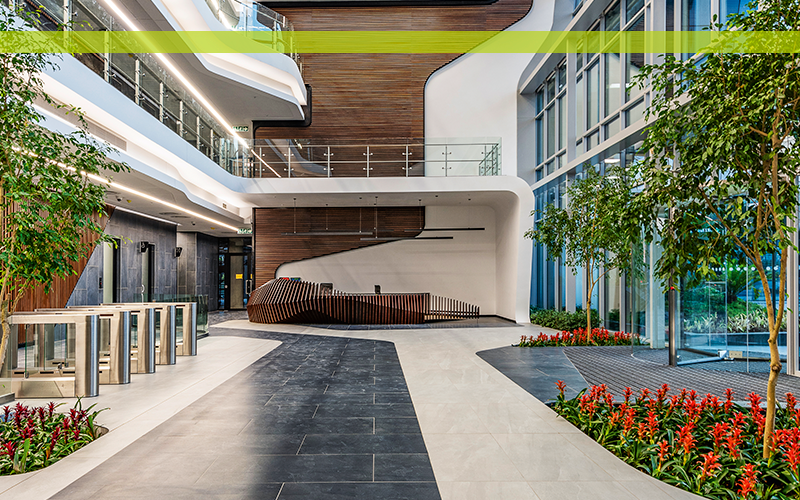 The solution was to terrace the eastern berm, breaking the slope into two levels by constructing a retaining wall, remedying the risk of surface collapse. ‘Tree “towers” were built below the final soil level to prevent the compromising spread of their roots into the berm build-up, and the surface slopes were treated with a soil-saver application and seeded with a seasonal veld mixture.’

The logistics proved as much of a challenge as anything: ‘There’s very little laydown area, and getting material up on to the podium slabs became a difficult task once the cranes were dismantled. Top-turf successfully brought up 600m³ of planting medium – 52 trees, 10 000 plants and 750 m² of paving – using a shared access zone from one narrow corner of the site. Never mind the benches, pebbles and screens…’

Jane Molony, executive director of PAMSA, on how paper and its  by-products are a... END_OF_DOCUMENT_TOKEN_TO_BE_REPLACED