Jan van der Walt had an idyllic childhood, growing up with two brothers and two sisters on a serene smallholding outside Potchefstroom in the North West province, where their mother raised sheep in the 1980s and ’90s. As the years passed, the town spread, growing denser, pressing closer, but those 2.8 ha stayed unspoiled – a place where rare black impala still roamed, and endangered blue cranes and grey crowned cranes could stroll with quiet confidence. A sanctuary in the suburbs.

As the boys grew and joined their father in the family business, manufacturing precision mechanical components, their appreciation of the familiar peace of their home surrounds grew. So, when the time came to live on their own, each opted to build their own place right there, on what is now a family estate – four independent residences without fencing between them, creating what architect Wim Verbeek calls a ‘pavilion in the park context’. 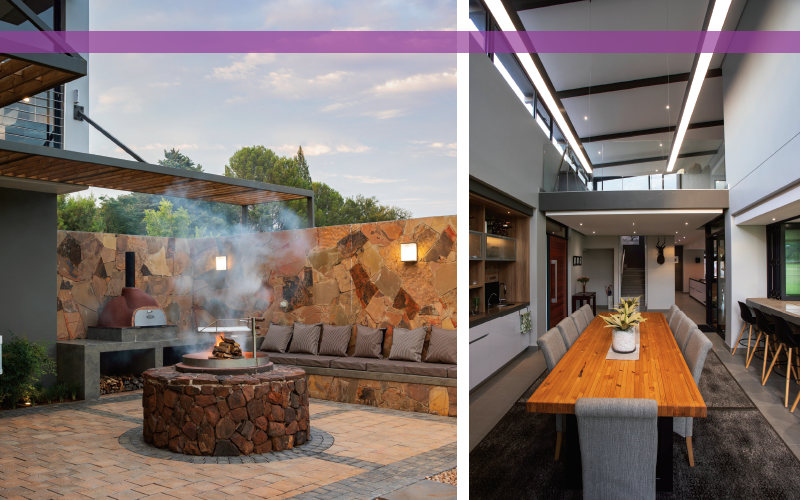 The first new house on the plot was built some five years ago for Van der Walt’s brother Stefan, establishing a new era of contemporary architecture on the estate. Its success set the tone and palette for future houses. But Van der Walt wanted his own take on the design to distinguish it from the other homes. ‘I wanted something with the same feel – contemporary, clean-lined and functional, a bit industrial but still a bit “bushveldy”, with some stone and timber,’ he says. ‘And I knew exactly how many rooms I wanted and where. Four bedrooms upstairs, for a family some day and guests, and a big open-plan downstairs area for entertaining, with views of the estate with our little dam and the impala.’

The brief suited Verbeek. ‘It was comprehensive … right down to the total square metres for the house, storage space requirements and specific amenities. And it was welcomed as it gave me a clear directive for the design. It was also challenging, as design flexibility was limited to the brief requirements. But apart from these, the client allowed me a lot of freedom with regards to the architectural language and finishes of the building.’

One of the challenges was the orientation of the house – the rooms had to be designed to avoid as far as possible looking into the surrounding properties outside the estate. ‘These are now very densely populated with little greenery, and I wanted the client to feel connected with the “sanctuary” inside the estate at all times,’ says Verbeek. Tied in with this awareness of the importance of nature and interacting with it sensitively, one of the primary requirements of Van der Walt’s brief was a ‘green’, energy-saving design. ‘He wanted the house to function as the solar power hub on the estate,’ says Verbeek. ‘The roof had to be designed to accommodate photovoltaic panels, coupled with a utility room to house a UPS unit, which can be used to store power that can be distributed to the rest of the house and the estate.’ 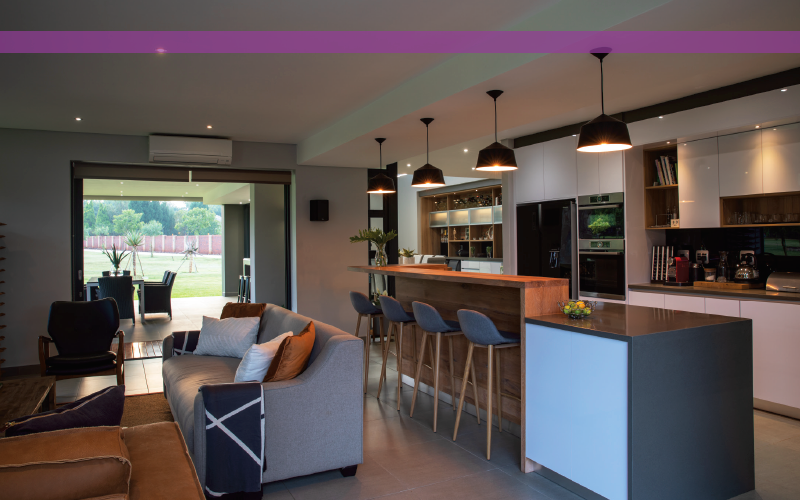 This was perfectly in tune with Verbeek’s own deeply green ethos – as well as being an architect, he is a qualified and certified green building consultant at the GBCSA, and drew on his sustainable-living expertise throughout the design, right from the positioning of the house. ‘It’s situated on the south-west corner of the estate, which was ideal from an architectural and energy-saving point of view,’ he says. ‘It not only gave the rooms optimal sun during the day, but all the inhabitable rooms also have amazing views overlooking the entire property and its wildlife. Because the house is set in such a vast, open, sanctuary-like space, I wanted the rooms on the ground floor to live outwards into the estate. This was achieved with large sliding doors, coupled with large glazed panels to maximise views.’

The sliding doors on either side of the living rooms stack open to merge the stoep, living room and fire pit into a single big space. ‘This is one of the house’s main features, as it transforms the entire ground floor from three individual spaces into one massive area, which is ideal for big social gatherings,’ says Verbeek. ‘It works like a dream,’ says Van der Walt. ‘We’re all family on the estate and very sociable.’ He also entertains frequently, as he runs production and human resources for their company. The fire-pit area has become his favourite part of the home, along with his bedroom, positioned at one end of the upstairs passage, with ‘awesome views of the dam with its ducks, and the buck when they graze or come to drink’. 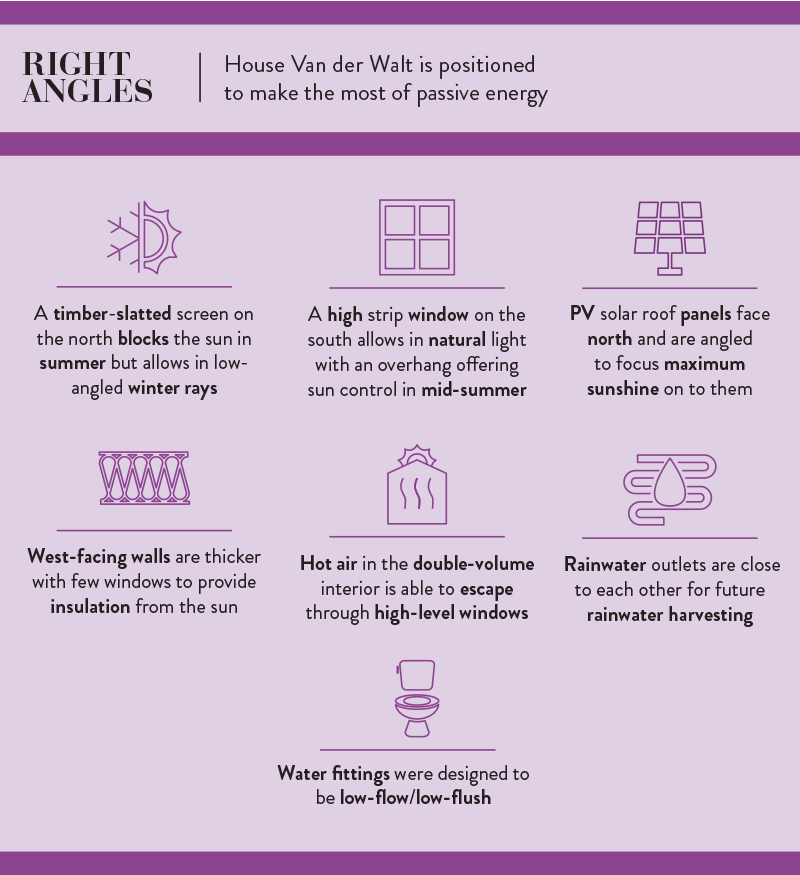 The house is also secure. ‘With all the living spaces being downstairs, and the bedrooms located on the first floor, the stairs leading up to the first floor can be closed off with a security gate at night – another brief requirement,’ says Verbeek. By day, the garden is always in play, and this is where Van der Walt loves to potter about in his free time. ‘I’m a keen gardener, and I try to keep things as indigenous as possible – though with our very cold Potch winters, it can be a challenge.’ He has planted 60 new trees, from pecan nut, lemon and false olive, to Cape ash, monkey thorn, weeping boer-bean, sweet thorn and white stinkwood.

Van der Walt also appreciates sculpture, and takes pleasure in finding new pieces depicting wildlife and installing them in the natural landscape, complementing the architecture. His most cherished are Rowland Daniel’s Warrior – ‘it symbolises protection, the fight through life, victory… You can make up your own story when looking at it’ – and the 3m-high Aloe, ‘which symbolises the drought’ and is cast on a concrete base. 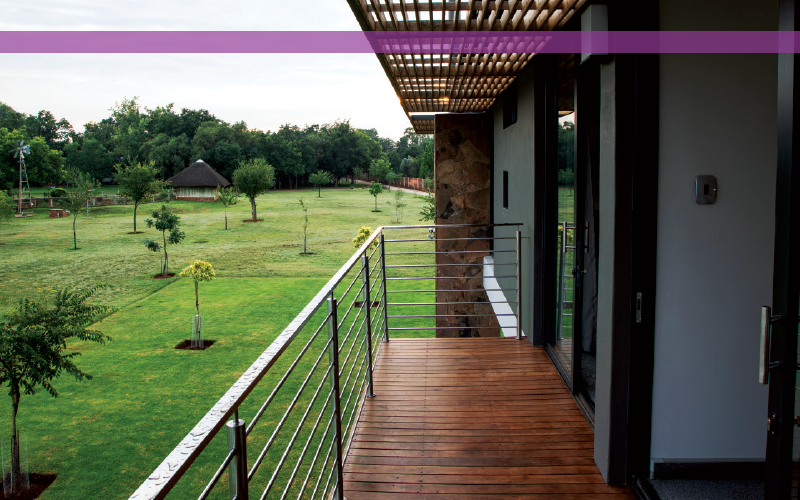 What is perhaps most remarkable about this project, however, is that it was achieved with the architect based some 1 400 km away in Cape Town. Van der Walt attributes this largely to Verbeek’s detailed plans. ‘It made it easy. He did all this modelling and testing on computer, and had everything worked out exactly. And I’d take videos of the progress on the building at this end and send them to him. We took it step by step, and Wim would come up in person when he could. It was an enjoyable process and pretty productive.’

Jane Molony, executive director of PAMSA, on how paper and its  by-products are a... END_OF_DOCUMENT_TOKEN_TO_BE_REPLACED