Great art, according to architect Heinrich Wolff of Wolff Architects, sets up great situations. ‘We try to make an architecture of consequence through the mediums of design, research and advocacy.’ The Watershed represented a perfect opportunity for this. In 2013 V&A Waterfront Holdings approached Wolff Architects to create a centre for business innovation in part of the historic Blue Shed at the Waterfront – home to a craft market and alternative wellness centre.

As Wolff told a Design Indaba audience: ‘It was basically about reconfiguring the Blue Shed.’ But from the outset he saw a need for more. ‘The shed was a physical obstacle between the Two Oceans Aquarium, a major tourist destination, and the rest of the V&A – people had to force their way around it and it caused bad urban connections. We proposed that we improve the city before we even deal with any of the tenants in the building, and basically make a street that goes right through the building.’ 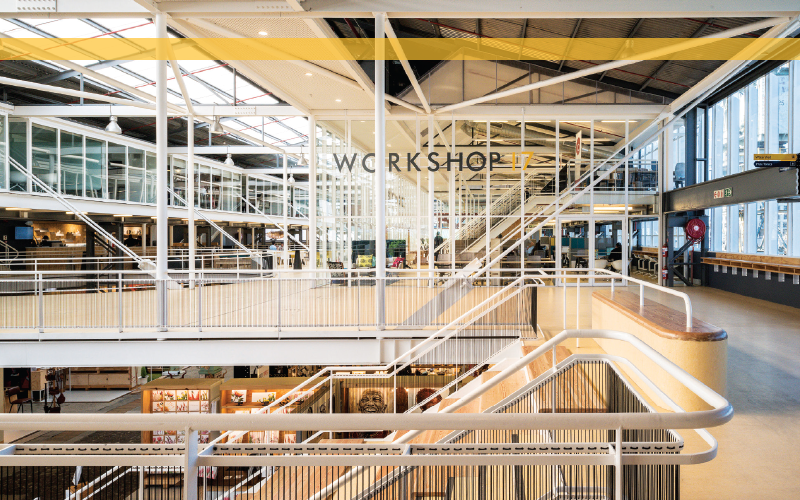 This would not be a mall in disguise, Wolff emphasised. ‘It’s an inside street.’ It was created by opening the shed at both ends to allow pedestrians to move through freely, passing individual shop tenants. The incubator (known as Workshop17) and the wellness centre were then accommodated above them by ingeniously suspending a 50m-by-50m gridded steel floor between existing structural elements from a gantry crane contained in the old shed.

No columns were used – ‘it’s suspended by its own bootstraps’, as Wolff puts it. ‘This makes the space underneath laden with possibilities for all kinds of events, from exhibitions and product launches to workshops and live entertainment.’ 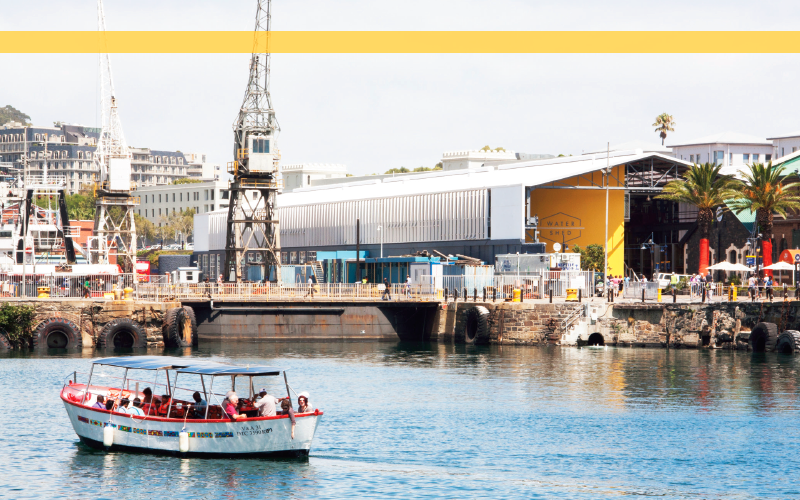 There were a number of challenges to overcome in realising all this, says Wolff associate architect James Pierre du Plessis. ‘The initial major one was to convince the client and the user groups that renovating the entire building was more feasible than fully retrofitting and internalising only a third of it. We showed that by combining the business incubator and a renovated market into a mainly open-air space, the project would yield greater results both financially and, more importantly, experientially for visitors and customers.’

The next challenge was to convince the land-owner that it would be a feasible endeavour. ‘The project was a new retail typology for the V&A, enabling small business in a market environment,’ says Du Plessis. ‘It’s an exemplar of how big business such as the V&A can enable small business – the smallest tenancy at the Watershed is 2 m² – to provide equitable opportunity and access in such a densely populated retail environment.’

There are currently 234 individual tenants in the ground-floor market, offering local products from fashion and jewellery to craft and decor. Another 93 sub-leasing tenants are in the business incubator above it, with an amphitheatre, hot-desking, working lounges, a work cafe as well as breakout and conferencing facilities, offering a range of settings to encourage creativity and productivity.

The spaces of Workshop17 were inspired by the Massachusetts Institute of Technology Media Lab in the US – a dedicated space to invent and test products, create new business models and services, and start businesses aligned to African markets. As David Green, CEO of the V&A Waterfront, has put it: ‘Enterprise development is key to economic development in South Africa, and significant job creation can only come from entrepreneurship and innovation.’ 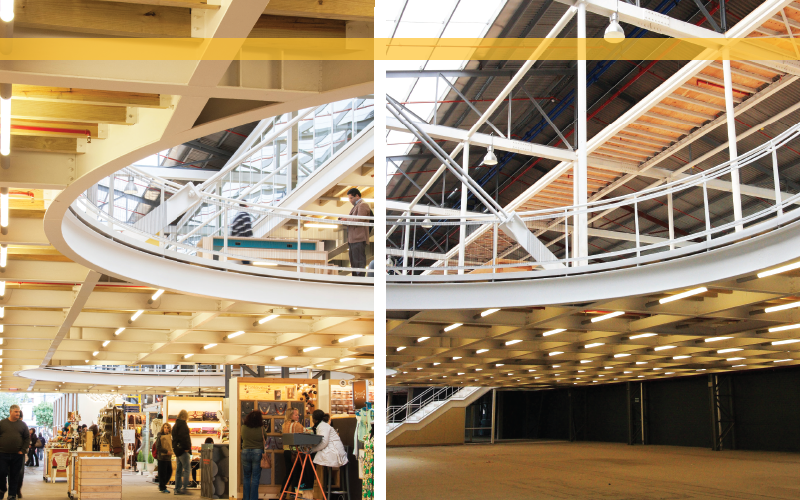 The third challenge for the architects was convincing the various user groups that they could all co-exist inside, in an open-air building – a mix ranging from crafters from disadvantaged backgrounds to emerging coders, academics and reiki therapists. This was approached with individual consultation and open communication.

The final challenge was the construction time – just nine months, from start to finish. Somehow, the architects and construction team pulled it off. Along with suspending the steel grid mezzanine and opening the ends of the building, they replaced the old corrugated sheeting in the gables with new translucent sheeting to allow natural light to flood the once dark space and give views of the harbour and Table Mountain. They also installed a 100mlong skylight.

The Watershed opened in October 2015, and immediately clinched a brace of awards – from the South African Council of Shopping Centres for the best redevelopment of an existing space; and from the Cape Institute for Architecture (CIfA). ‘There’s something about the collective nature of a street that brings us firmly in relation to each other,’ notes the CIfA. ‘The project beautifully demonstrates the possibility of a more integrated, diverse society.’ 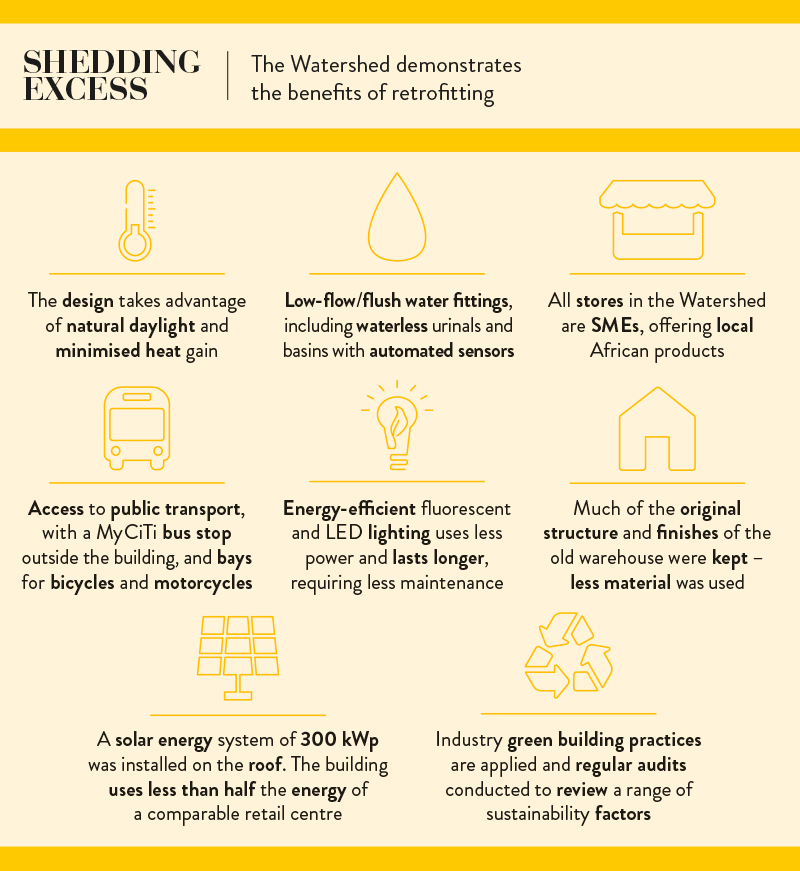 More than that, the project illustrates the possibility of a more sustainable, greener society and planet. Each step of the design process was premised on this, in line with the ethos of both the owner (V&A Waterfront Holdings) and Wolff Architects. According to Du Plessis, the major green aspect of the Watershed is that most of the inside of the building is treated as covered outdoor space. ‘This allows for conditioned spaces such as offices and meeting rooms to be minimised, and executed at a very high standard in terms of HVAC, acoustics and servicing.’

The remaining market and tenant spaces are in an open-air environment, with the open ends of the building facilitating cross-ventilation, and the long skylight providing plenty of natural lighting.

As much of the existing shed was used as possible, refitted (rather than demolished and rebuilt from scratch). ‘The shed provided a simple but efficient enclosure where roof and walls were structurally in a good state,’ says Du Plessis. ‘The roof was re-sheeted and external skins reclad, then the gridded steel first floor was suspended from the original gantry structure instead of constructing new columns, so less material was used. Francois Joubert of Greenplan Consultants assisted greatly in implementing many of these green principles.’

To its credit, since the opening the V&A Waterfront has kept investing in the building’s capacity to become more self-sufficient and cost-effective, according to François Retief of Sow & Reap, who was appointed green consultant post-construction.

‘Biggest of these investments has been the installation of a 300 kWp solar panel plant that generates enough energy to supply the building’s needs and even feed into the V&A network,’ he says. ‘Combined with recent adjustments to the thermal environments by the installation of fire-proof glass louvre windows at the ends of the shed, this has produced a highly efficient building.’

At the time, the project aimed at a Green Star Interior rating, but the tool was still in development. Today though, it boasts a world-leading 6-star Green Star Existing Building Performance v1 (EBP) rating, as awarded by the Green Building Council of South Africa (GBCSA). EBP helps close the gap between benefits targeted during design and construction, and actual operations. ‘It’s an operational efficiency rating, assessing aspects such as energy and water use, and it’s the highest green rating,’ says Retief. 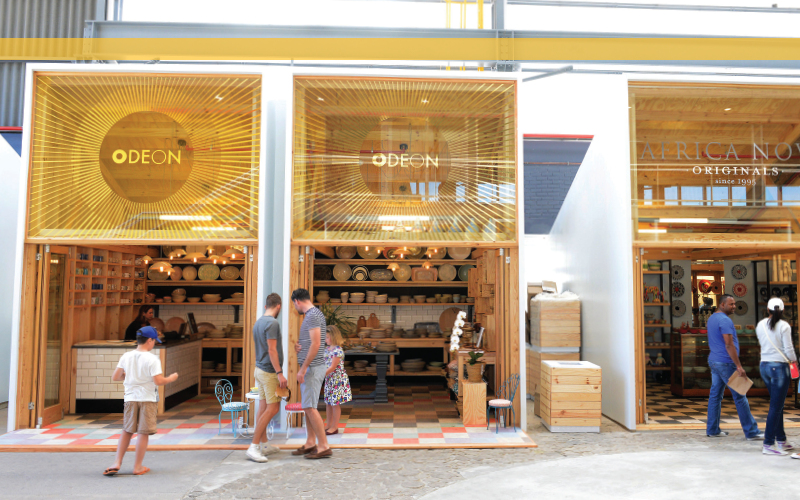 ‘It’s representative of world leadership in environmental sustainability. Few refitted existing buildings have it, especially retail centres – this is probably the only one in South Africa.’

In October 2018, the Watershed scored again – as runner-up at the GBCSA award for SA’s Highest-Rated Building (the winner was 78 Corlett Drive, a new office block in Johannesburg).

‘We believe that existing buildings offer opportunities of various kinds,’ says Du Plessis. ‘We urge clients and designers to imagine those at the outset of projects. Taking on board these opportunities and retrofitting can provide richer experiences while potentially saving costs.’

Jane Molony, executive director of PAMSA, on how paper and its  by-products are a... END_OF_DOCUMENT_TOKEN_TO_BE_REPLACED