Basic sustainability and green features are increasingly an intrinsic part of design, but a handful of valiant developers and architects are pursuing the ultimate. When boutique developer Legaro Properties took over a brownfield site in Corlett Drive, Melrose North, in 2017, to create an open-plan co-working office space for its head office, it set out to achieve something special in the progressively pressing quest to preserve the planet. ‘We’re passionate about the environment and limiting society’s impact on our natural resources,’ says Legaro MD Michele Brookes. ‘It’s something we live on a daily basis.’

As Legaro projects director Roger Brookes puts it, the firm is ‘committed to driving green building innovation’. Beyond simply ‘doing less’ to harm the environment, it wanted to lead the way in neutralising the impact of developments – and even have a net positive impact. To that end, the firm teamed up with Solid Green Consulting, working closely with sustainable building consultant Annelidé Sherratt. 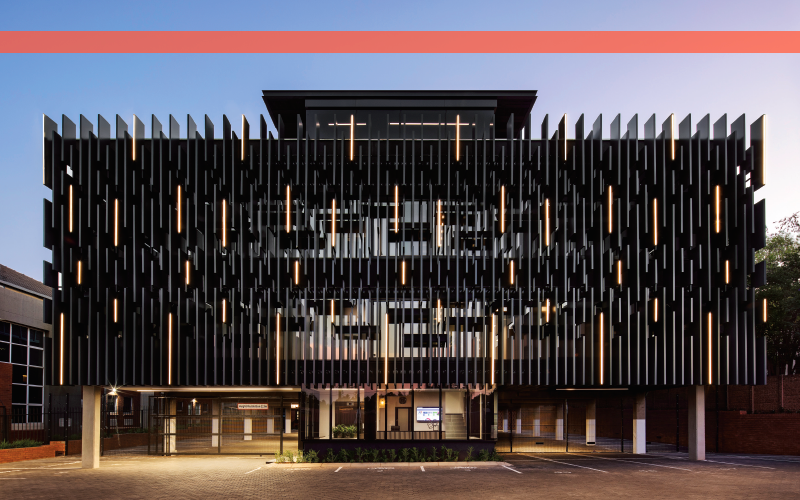 For a creative and environmentally conscious architect to shape their vision, award-winning Enrico Daffonchio of Daffonchio & Associates was approached. Having grown up in northern Italy, Daffonchio has imbibed the country’s blend of classical design and rationalism; tradition and innovation, and has offices in Milan as well as Cape Town and Johannesburg. Daffonchio describes his style as ‘indulgent, sensual minimalism; a play between industrial and luxurious finishes’, and that’s what he’s brought to 78 Corlett Drive. His brief was to develop an off-the-grid green building, minimising the environmental footprint. ‘Planning was paramount,’ he says, as was collaboration with the client and contractors – and attention to detail.’

In Daffonchio’s designs, ‘form follows energy and, in South Africa especially, the sun is the most important driver, controlling heating and light’. This shaped the aesthetics and the extraordinary design of Corlett Drive: a three-storey block incorporating strong minimalist geometries, wrapped in a dark carapace of moving aluminium shading louvres to provide both a dynamic facade and a practical shading device. Resting lightly on a small glass box that houses the main circulation hub and reception, it could be floating in a Studio Ghibli animation movie – one of the marvellous scaled creatures, armoured vessels or floating castles born in the imagination of artist Hayao Miyazaki. Yet this is functional to its core. ‘We used extensive computer modelling with parametric software for simulations, and the design and positioning of the building and its louvres, like every element, were optimal,’ says Daffonchio. According to Sherratt, each facade is treated depending on the orientation, providing protection from direct sunlight and heat without compromising on natural light. ‘The north facade has fixed vertical louvres; the west and east facades have movable external blinds with horizontal shading; and the south simply has a mesh with growing vegetation.’ 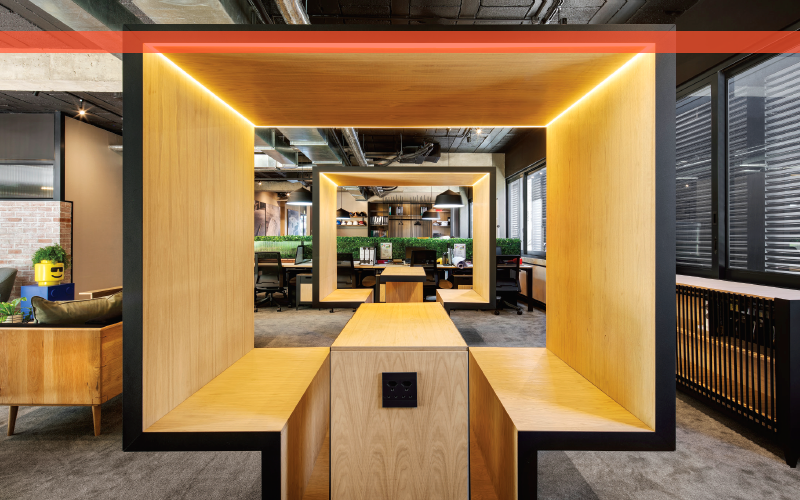 Before construction of 78 Corlett Drive could begin, an existing building had to be demolished. ‘A brownfields conversion provides its own unique challenges,’ says Roger. The biggest of these was soil preservation. ‘It can take 500 years to produce just 2.5 cm of topsoil. We removed it all and used it in gardens.’ They also recycled 90% of the waste from the demolition – a laborious process as it all had to be quantified and then recycled as was most appropriate, including the cement bags and plastic wrapping of the bricks.

Materials used throughout the project were chosen for their environmental friendliness and sustainability, and meticulously measured to minimise waste. With Daffonchio’s relish of the play between industrial and luxurious finishes, the interiors centre on concrete, warm raw brick and wood (striking in planters, bench cubicles and simple ‘wrap tables’ that serve as communal desks), juxtaposed with cool marble (pale, ‘floating’ counter islands) and steel (gleaming in circular light fittings). Where concrete was used, a 40% reduction was made in the quantity of Portland cement on average. Where steel was used, a 60% recycled content by mass was achieved. And when it came to timber, 50% (by cost) of what was used in the building and in construction was either Forest Stewardship Council certified, or reused/recycled. 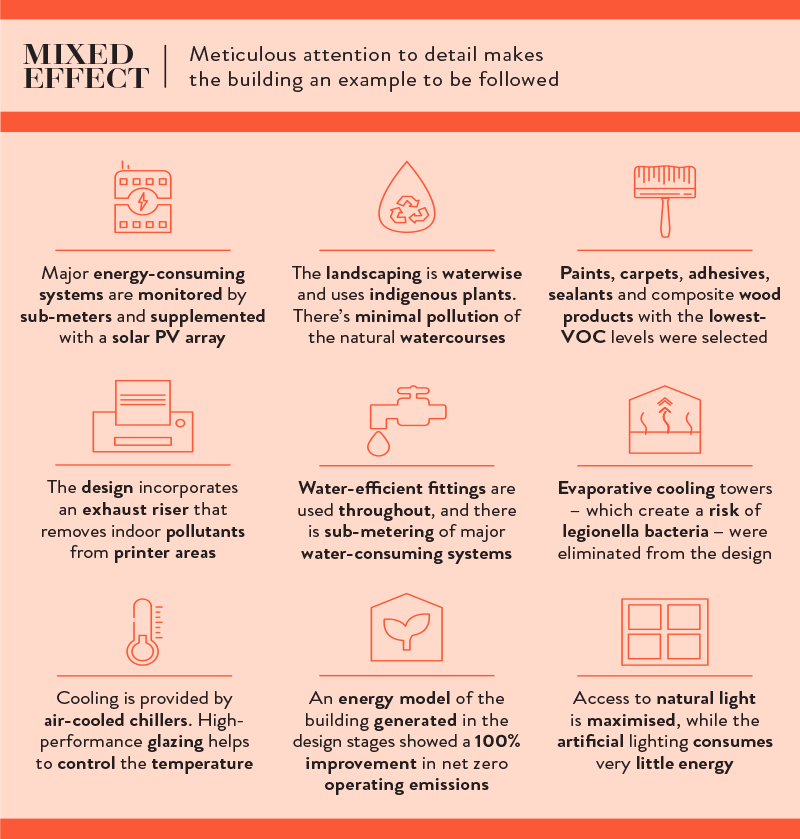 A special recycling storage area was created in the basement area from which non-recyclable waste is now collected weekly by Pikitup, while recyclable waste (from paper and cardboard to plastic, glass and cans) is collected every fortnight by Whole Earth Recycling.

Services and circulation were placed in the centre of the building to minimise the need for long pipes (many requiring insulation), and offices were positioned around the edge to amplify the use of natural light and ventilation. ‘The design allows a direct visual connection to the external environment for 80% of the usable office area,’ says Sherratt. The entire usable area is mechanically ventilated, and cooling is provided by air-cooled chillers, instead of water.

To save electricity and its heavy carbon cost to the planet, a solar PV array was installed on the roof, producing around 92 000 kWh a year and tying into the grid. Enclosed spaces in the building are all individually lit, and over-design of the lighting was deliberately avoided, achieving an average maintained illuminance level of less than 400 lux. 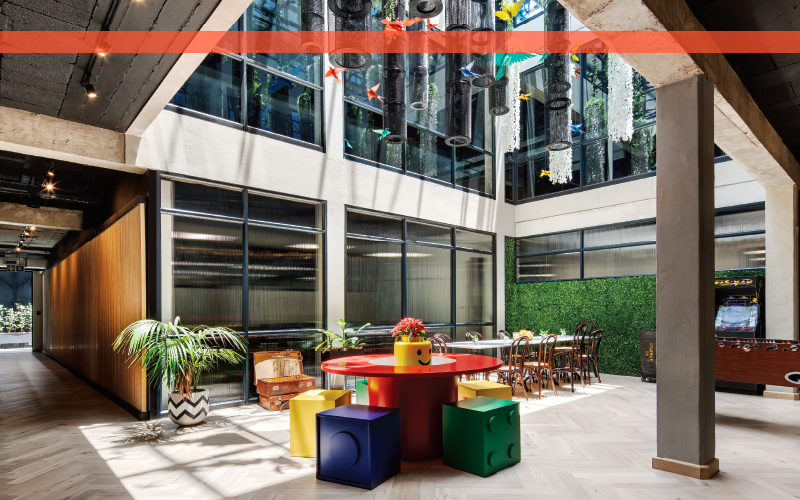 To heat water, small high-performance undercounter geysers were installed in each bathroom (obviating the need for long runs of insulated hot water pipes), and the rooftop PV array supplements requirements. Power and lighting use is carefully monitored with separate energy sub-meters to help control consumption. ‘The behaviour of a building’s occupants and users is vital for reducing consumption,’ says Sherratt. The Corlett Drive target is an overall consumption of 75 kWh per m2 per year, far less than the 200 kWh per m2 per year SANS 10400-XA requirement.

To help save water, there is also sub-metering of major water systems, and low-flow fittings have been used throughout. There is no fire sprinkler system (there’s a centrally positioned pillar hydrant, so fire safety requirements are met), and landscaping has been designed to minimise the use of potable water for irrigation. 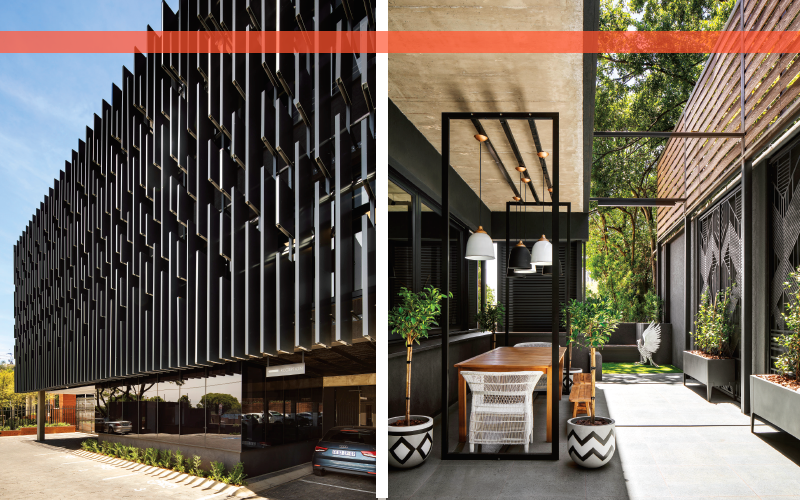 When it comes to parking, recharging facilities are provided for electric vehicles, and six bays in prime positions are reserved for hybrids and other fuel-efficient vehicles, while there are five bays for motorbikes, near the main entrance. There are also bicycle racks for staff and visitors, along with a changing room, shower and lockers.

For the enviro knights behind Corlett Drive, the health of tenants and visitors is as much a concern as the health of the planet. This can be seen in the prominence given to the staircase, which has been made a focal point of the interior design, encouraging people to walk up to the second floor instead of taking the lift.

Cost, too, was a consideration but always weighed against future benefits. ‘Development costs for Corlett Drive were about 11% higher than conventional construction methods, mainly because of the solar panels and shuttering installation, but the energy savings will offset that over time,’ says Sherratt.

‘The Green Building Council of South Africa congratulates Legaro Properties for demonstrating their environmental leadership and achieving a net zero carbon rating for 78 Corlett Drive,’ Manfred Braune, GBCSA chief technical offer, said at the awards function. ‘Net Zero certification helps industry understand the ultimate goal of what we should be aiming for as property owners and developers in terms of environmental objectives.’