On the slopes of Signal Hill between the Cape Town City Bowl, V&A Waterfront and the historical district of Bo-Kaap lies a little piece of another world. De Waterkant Village is officially part of Green Point, and its inhabitants take that shade seriously, with whole-food eateries, yoga studios and outlets for upcycled artwork among coffee shops, decor and fashion boutiques. 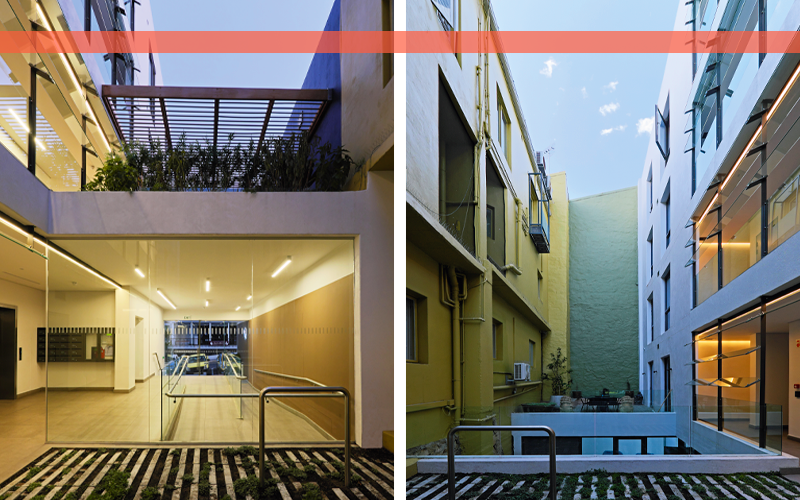 Built in the 19th century, De Waterkant’s architecture is a blend of Cape Dutch and Georgian, reflecting its cultural heritage. Along with some quaintly cobbled streets, it celebrates the recent past with the fan walkway that links the railway station to the Cape Town Stadium, a happy legacy of the 2010 Fifa World Cup. But it keeps an unforgetful eye on a past with the Prestwich Memorial and visitor centre, housing the skeletons of slaves and marking the start of the Slave Route to Table Mountain, which rears up behind it, visible from every street corner.

In the section of village known as the Old Cape Quarter, Tower Property Fund is creating a mixed-use hub with retail and office space, as well as 55 luxury apartments. And on the opposite side of the precinct stands 32 Napier Street, on a narrow site bounded by Napier, Jarvis and Moreland Terrace – a sleek, admirably restrained five-storey development that provides the perfect transition between the larger scale of the Cape Quarter and the smaller buildings on Jarvis Street.

Equally importantly, it provides something that is as coveted as residential and retail space in this sought-after precinct – parking. The developers excavated three levels of parking below 32 Napier and the road, linking it to the Cape Quarter Lifestyle Village. There are 141 new bays in all, for tenants and their visitors, and for others drawn to the many attractions of the area, and the periodic big concerts and sporting events held at the Cape Town Stadium.

‘Getting all the heritage approvals and con forming to the restrictions around them and around size wasn’t easy,’ says Martin Lardner-Burke, a partner at dhk Architects, which handled the development. ‘And for the parking build, we had to close streets – and the traffic needed to be diverted. It had to be done in stages.’ 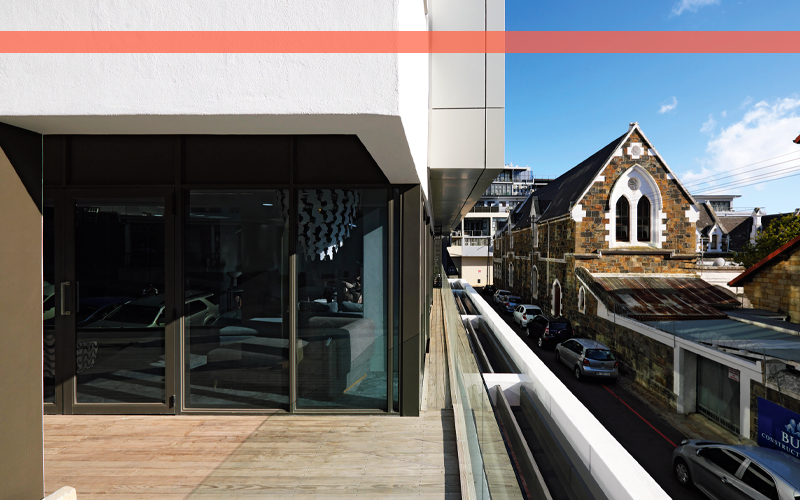 However, dhk is no stranger to challenges, having weathered those around some of the city’s most daunting and demanding projects, including Portside (currently the tallest building in Cape Town), the refurbishment and preservation of the Taj Palace Hotel and, recently, Sable Park on a prime gateway site south of Century City’s Bridgeways green precinct.

Before getting started at 32 Napier, dhk had to demolish a two-storey building and, here too, green concerns were top of mind from the out set, watched over by sustainability consultants Francois Retief of Sow & Reap and Simon Penso of Imbue Sustainability. 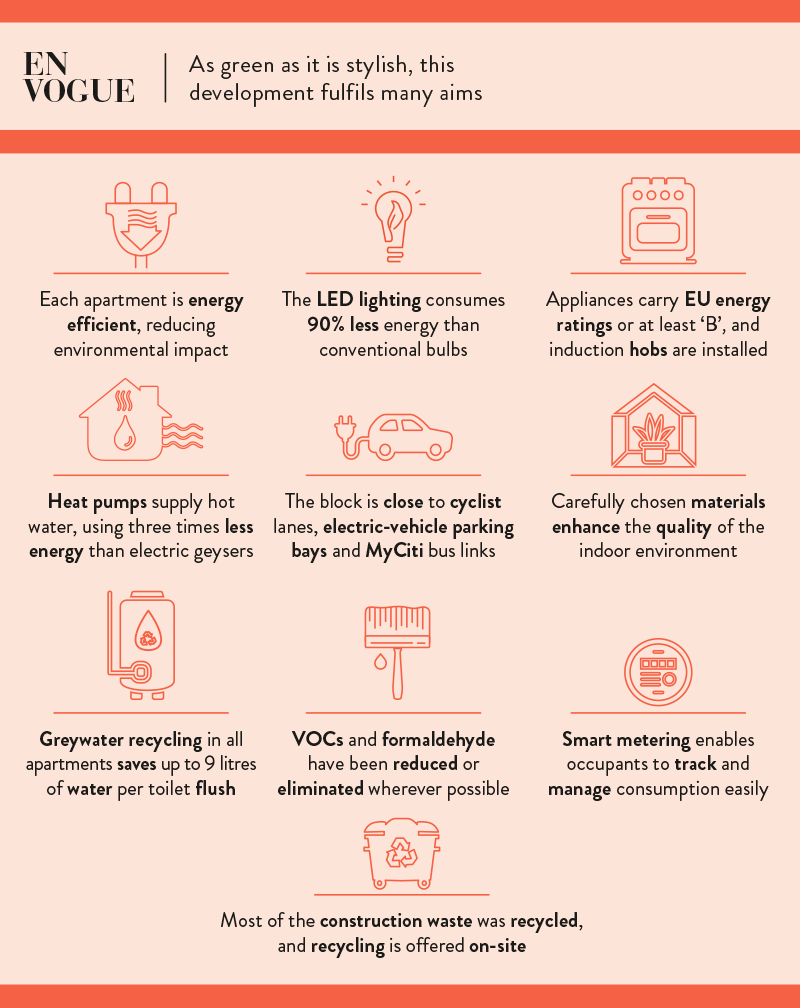 ‘Tower Property Fund strives to ensure their buildings perform to best practice sustainability standards,’ says Retief. ‘With the construction of this new project, the brief was to ensure this was the case.’ The sustainability team monitored everything from waste disposal to the water issues – and there were plenty of those.

‘The building was designed prior to, and during, Cape Town’s water crisis,’ says Retief. ‘To this effect, it was essential to minimise the draw on local infrastructure. This was achieved not only with efficient fittings, fixtures and landscape, but by recycling greywater within the development to ensure toilets are not flushed with potable water. Energy monitors were installed for hot water and overall supply. 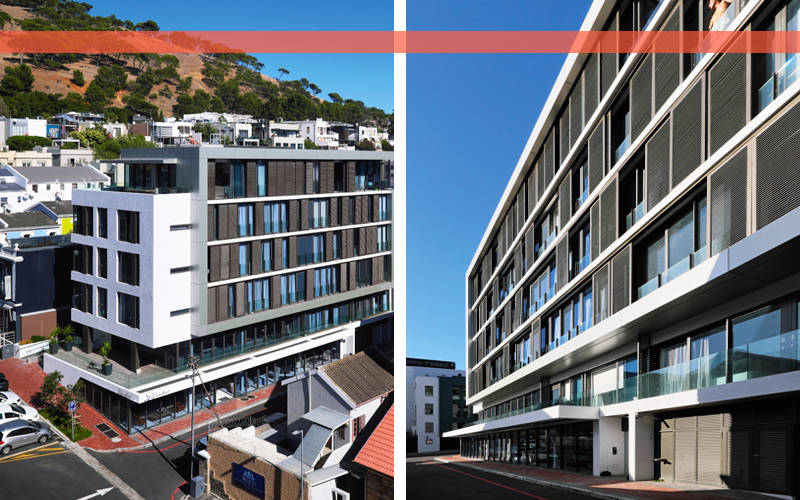 ‘Smart metering is often an expensive and complex requirement, but at 32 Napier we installed consumer technology that is not only cost effective but can easily be engaged with by the unit owners or tenants.’ Ironically, the build was affected not only by a water shortage but by water excess at times. ‘Cape Town was at the height of the water crisis when construction began, and we had tanks on-site,’ says Lardner-Burke. ‘But three storeys down in the basement, we had to focus on dewatering, because water rises when you excavate this close to the harbour. And after a few big winter storms, water pours down from the mountain.’

The biggest architectural challenge, however, was to come up with a building design that respected the context. ‘Being situated in a historic quarter of Cape Town required careful work from the team to integrate it within the existing landscape,’ he says. ‘And budget was another challenge – in residential projects of this nature, budgets are under tremendous pressure, given the competitive nature of the market.’

dhk settled on a contemporary aesthetic. Each upper floor of 32 Napier comprises one two-bedroom and four one-bedroom apartments, with two two-bedroom penthouse apartments on the fifth floor, and a roof deck above.

‘We looked at the scale, and didn’t do an old-new pastiche,’ says Lardner-Burke. ‘Instead we designed a simple modern block with a cut-back and real courtyard with a balcony on the west side, and an urban edge with shutters looking down at Moreland Terrace on the east. The shutters were to be timber originally, but for high-end residential they’d require too much maintenance, so we went with aluminium, powder-coated.’ 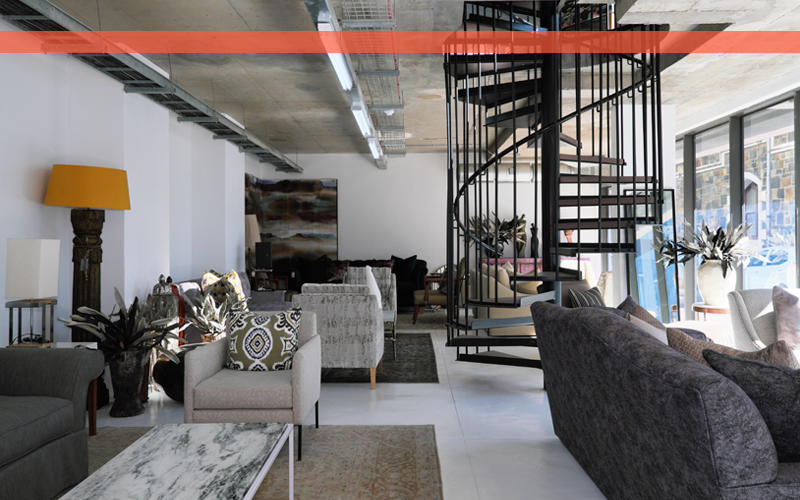 The building, he says, is ‘basically concrete bricks on a concrete slab with sheer walls. By using scissor stairs up the central core, we saved space and could keep the edges free, so all the apartments have access to the views, which are amazing – the harbour, the city and the mountain. Especially the penthouse [units], which we clad in aluminium composite panels. Setting it back and not taking the brickwork all the way up the facade helped to de-scale the building’.

They kept colours simple and neutral. ‘We wanted white, fresh and natural. And for the aluminium shutters we went bronze – a warm retro colour we like, moving away from the usual anthracite and dark greys. Chocolate felt right for a feature wall at the entrance, and in a courtyard an artist has introduced mustard and green. I think the result sits well in the landscape.’

Tenants agree. ‘It’s a great place to be,’ says Dana Blumberg, manager of Wunders furniture, which occupies the interlinked two lower commercial levels. ‘It’s light, airy and safe. It’s not in the city or the rat race of Sea Point; it’s suburban but with charm, and there are lots of interesting people.’