Some see the NINEONS (9 on Scholtz Road) building as a fantastic fish with giant fins, swimming through Green Point. Others swear it’s a ship under full sail. Jacques van Embden, MD of Blok, the developer, is happy with either analogy. ‘The “fins” or “sails” are inspired by the building’s location in Three Anchor Bay,’ he says. ‘The architects drew inspiration from the ocean, both its natural and man-made elements.’

Eric van den Berg of Wauw Architecture and Design says they wanted the shapes to be reminiscent of the ocean, but that they resisted the temptation to make the vertical elements a literal representation of fins, gills, wings or sails, and rather created enticing shapes that would be open to interpretation. ‘They’re functional as much as aesthetic, growing out of the physical constraints of the site and requirements of the brief.’ 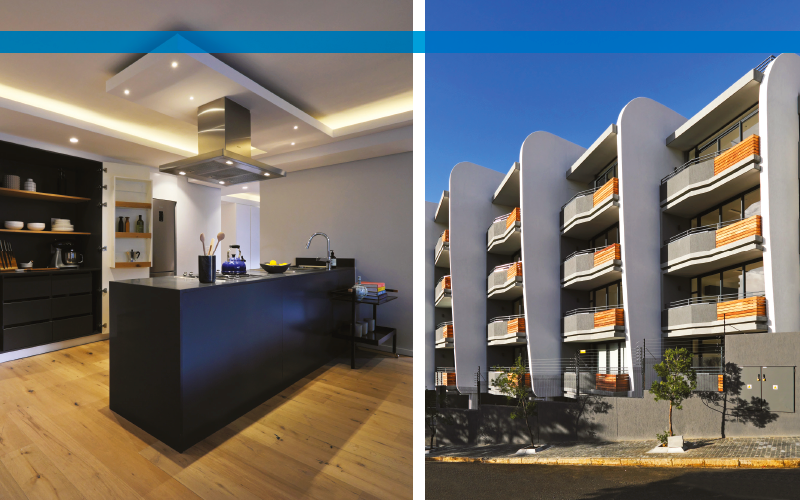 That brief was to design a building that is unique in character and breaks away from the standard square, box-like apartment block. It had to be a combination of mainly one- and two-bedroom apartments, and penthouses with three bedrooms. And it had to maximise the views while remaining private from the busy road flanking it on one side.

In keeping with Green Point’s community ethos, it also had to have an alluring communal space with a pool and braai area. But above all, each of the 23 units had to be compact yet feel spacious, with every area well considered. Wauw responded by turning design problems into opportunities that would help meet the brief. ‘We used the suboptimal orientation of the site and its proximity to the busy road as a drive for finding a unique design that exploits the best aspects of the site,’ says Van den Berg. ‘And we used the compact nature of the units to introduce less conventional ideas of arranging spaces, and placed the communal area at the most prominent corner on top of the building.’ 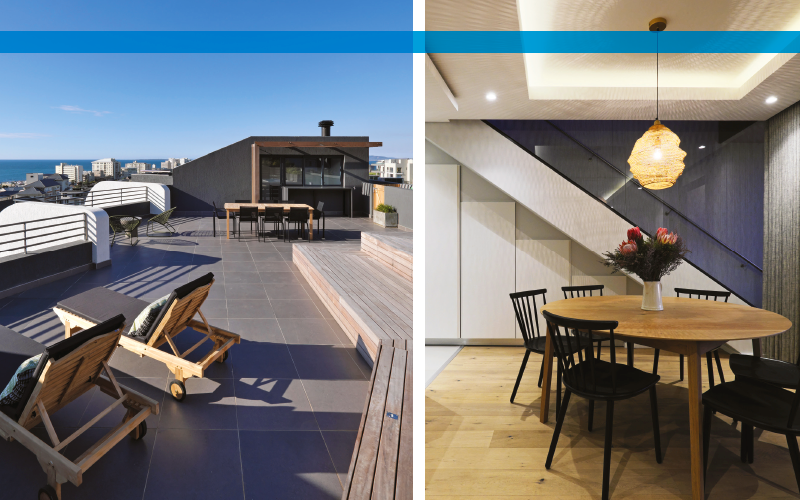 The structure’s distinctive design grew from the constraints of the site – a narrow rectangle sloping down towards the ocean on its short side, with the best views also in that direction, and the busy High Level Road on the opposite short side. ‘To optimise the views and improve the orientation for as many units as possible, we rotated all the units 45 degrees in relation to the road towards the view, and sliced the envelope with vertical elements to shelter them from the road traffic and provide privacy’ – those distinctive fins-slash-sails, or whatever your imagination prefers. ‘This was also done to improve the orientation in terms of sun control,’ says Van den Berg. ‘We then realised that this configuration would give the building a very different appearance when approaching from above on High Level Road, or below on Scholtz Road.’ When approaching from below, you see the frontage of the units and their balconies; when approaching from above, you see only the muted vertical structures.

‘This inspired us to play further with the idea of the building changing as you move around it, by modulating the vertical elements and allowing them to evolve, or form a progression of unique organic shapes. We created a further tension in the differing appearance of the building by making the units and their balconies form more rectilinear and uniform elements in juxtaposition to the organic vertical elements. Then we added timber and planters to the balconies to further punctuate the faces of the units, while the vertical structures contrast this in their simplicity. So the building takes on an entirely different character depending on the direction from which you approach it, and continually changes its overall form when observed from different angles.’ 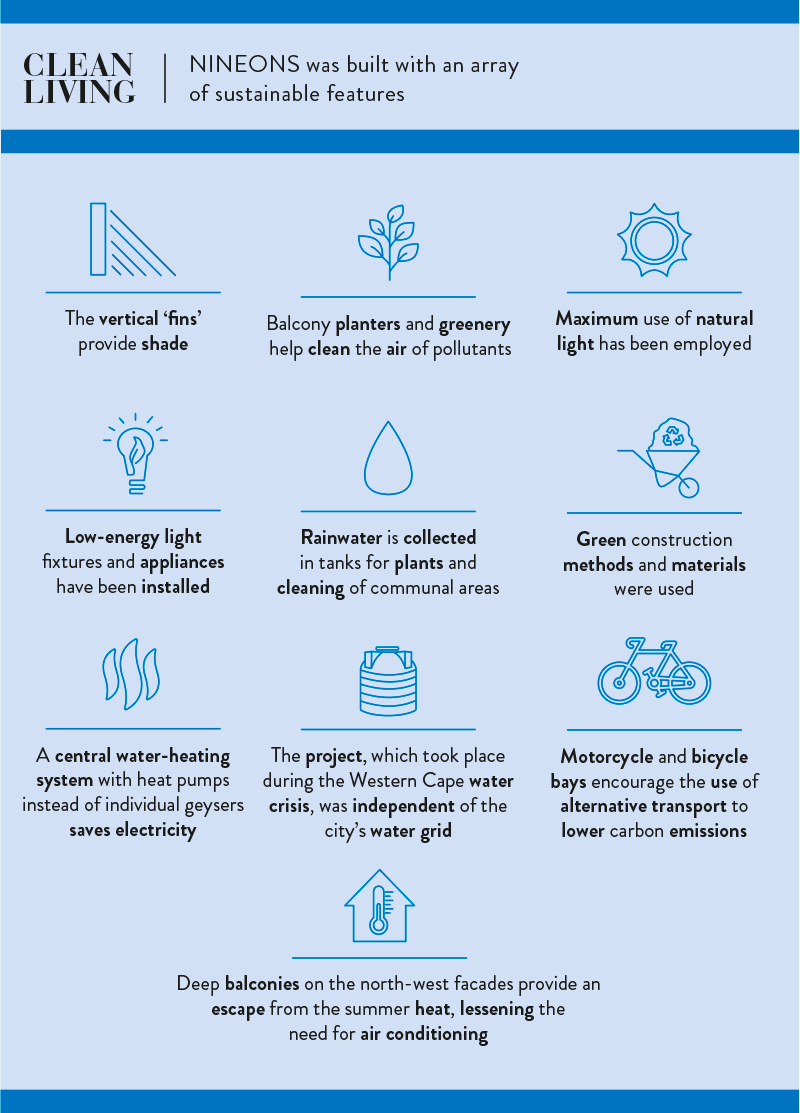 The architects encountered a range of challenges along the way. ‘The first was designing sensible units while dealing with angles and strange junctions,’ says Van den Berg. ‘We dealt with this by keeping the main spaces in the units rectilinear as far as possible and using secondary spaces to deal with the angled junctions.’

The second challenge was expressing the variation in the shape of the vertical structures within the narrow confines of the building’s allowable envelope. ‘To achieve greater differentiation between the elements, we pulled them back beyond the edge of the balconies in key places.’ The third challenge was dealing with resistance to development and densification in this part of Cape Town. This led to Wauw having to redesign the building to have two fewer floors, but a similar amount of sellable space. ‘We did it by improving the economy of the use of space so we could fit the required apartments into a smaller envelope, and we optimised the parking so more space could be used for apartments,’ he says. 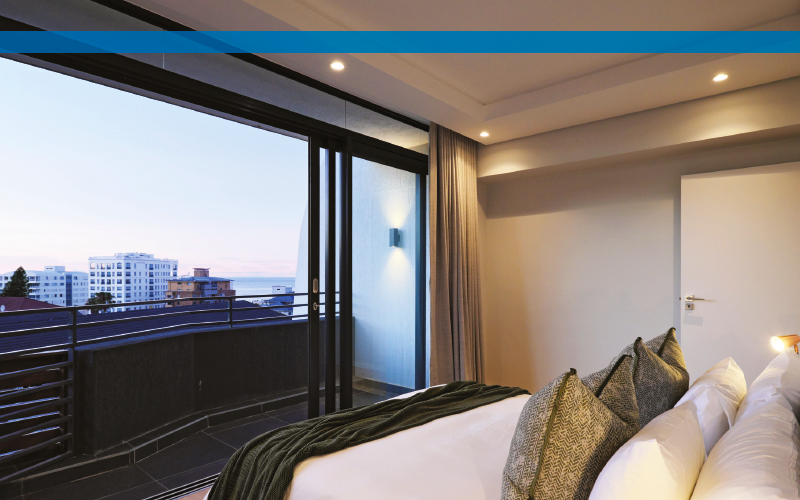 All of this produced a number of innovative features. One proving particularly popular among occupants is the introduction of an inner courtyard for each unit, designed to create a separation between bedrooms and passageways while also dealing with what Van den Berg describes as the ‘awkward junction between the angled units and the main circulation routes’.

The allowable envelope for the sites also left small slivers of space on the roof too small to be used as a room. This space was used instead to add an outdoor bar counter with sink to each penthouse’s private roof deck; another novel element. In fact, NINEONS has become a textbook of contemporary compact living, with a range of innovative space-saving features. In the smallest apartments, the entire bedroom is raised onto a built-in plinth, which conceals drawers that pull out at the base to provide storage. The bedrooms also have screens that separate them from the passage, but allow this space to be incorporated in the room when preferred. 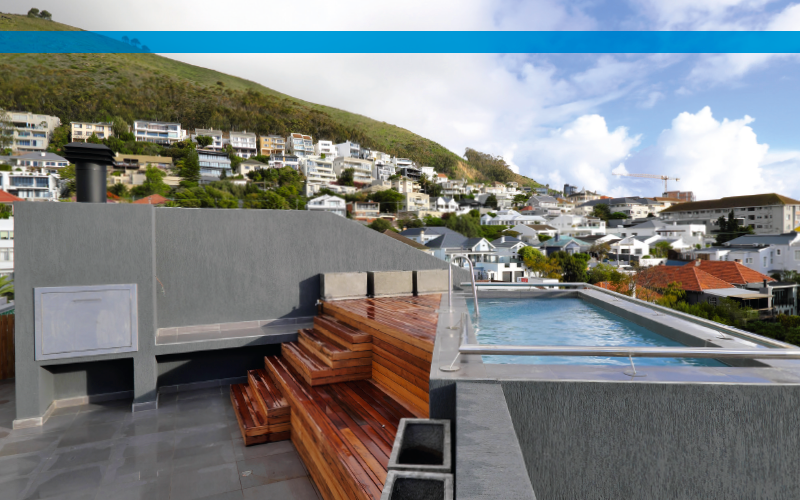 Furniture too was chosen with specific considerations of space, and provided by Dark Horse, a Cape Town company that uses locally sourced materials and skills. ‘We’re an alternative brand of design rebels,’ says co-founder Jarrad Nelson. ‘Our designers work with local leather, timber and steel to put a twist on the classics. NINEONS’ compact living brief was a design challenge, requiring pieces to be functional as well as stylish.’

Particular attention has been paid to the kitchens where, to provide more space and storage, Blok ‘Super Cupboards’ were installed, each folding open to reveal more usable surfaces, both vertically and horizontally. The cupboards contain counter space, drawers, shelves and plugs, and the door leaves also hold shelves and storage. ‘Essentially a large part of the kitchen is condensed into this cupboard space that folds away when it’s not needed,’ says Van den Berg. ‘Your kitchen appears and disappears at will.’

But Van den Berg is perhaps most pleased with the rooftop spaces. ‘They really are spectacular – both the communal entertainment spaces and the penthouse roof decks. I love the idea that what could be considered the best space in the building was reserved for everyone to enjoy.’

Van Embden agrees. ‘It’s a great place, with panoramic views of Three Anchor Bay all the way across the Green Point common,’ he says. ‘With NINEONS, we wanted the architects to create something that would stand proud but also be modest in the environment.’

It was quite an ask. But it has received quite an answer.