Stellenbosch has its own quirky traditions. One of them takes place on Wednesday evenings when students descend into the oak-lined streets of the historic town centre to celebrate ‘klein Saterdag’.

In Afrikaans, ‘little Saturday’ is what is known as ‘humpday’ – the day in the middle of the working week that needs to be conquered before freewheeling towards the weekend. Local businesses are geared up for this mini-weekend during the week, offering student specials in restaurants, pubs and nightclubs.

For more than a century, Stellenbosch University (SU) and leading high schools, such as Paul Roos and Rhenish Girls’, have been infusing a youthful energy into the exquisitely preserved Boland town. In financial terms, the university also has a game-changing impact on the local economy (around R5.6 million for 2018, according to an SU study). And it was the university that inspired the establishment of Techno Park in collaboration with the local municipality. The tech-focused science park has been taking shape to the south of town, adjacent to the Kleine Zalze vineyard and Stellenbosch golf course. It’s a landscaped 55 ha special-ratings area (25 ha of which is reserved for open spaces, lawns and waterways) that has shifted its focus towards improving the property value in the park by attracting high-calibre tenants and establishing a community feeling. Over recent years it has become home to a variety of firms, ranging from engineering, software and consulting to graphic design, finance and more. The growing Techno Park community has its own coffee shops, a Protea Hotel with a restaurant, two hairdressers, gym and yoga facilities as well as a nutritionist, doctor, dentist and physiotherapy services.

By far the largest presence in the tech-focused park is Capitec Bank’s new head office, which was designed by dhk Architects as a ‘three-storey building with an open-plan floorplate that loops around a central triple-volume atrium’. Green-building elements include improved water- and energy-saving and air quality. 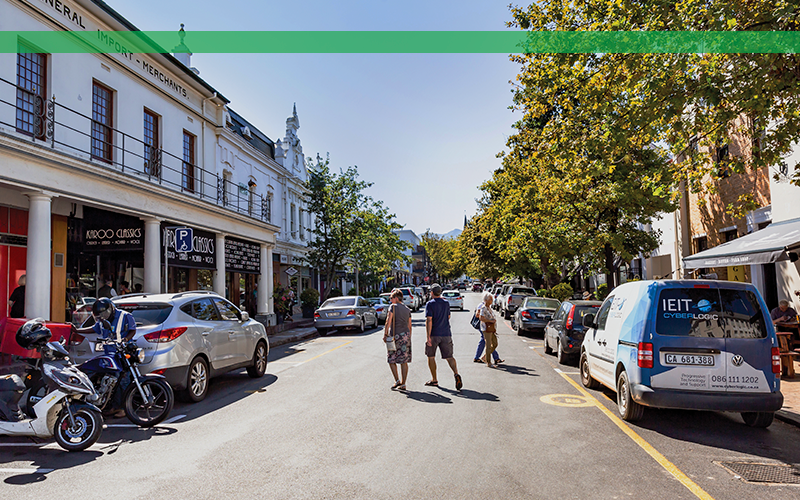 At the other end of town, plans are under way to bring the University of Stellenbosch Business School (USB) back to Stellenbosch. The USB is set to move from its Bellville campus to part of the Oude Libertas land that was donated by spirits and wine producer Distell. The university says the new site is ‘strategically located within the planned redevelopment of the Adam Tas Corridor, an area stretching along the R310 and R44 along the foot of Papegaaiberg, from the disused Cape Sawmills site in the west to Kayamandi and Cloetesville in the north’. The Adam Tas Corridor forms part of the municipality’s vision of a spatially integrated, more transformed Stellenbosch.

The strength of the area’s commercial property market is emphasised in Wesgro’s Western Cape Property report 2018/19. ‘There are office nodes in Stellenbosch that are now achieving higher rentals per square metre, at up to as much as R305/m2, than prime nodes within the city of Cape Town, such as the V&A Waterfront or Claremont, where top commercial rentals will fetch around R220/m2,’ writes Carola Koblitz,
the report’s editor and chief researcher.

That was before the COVID-19 virus brought the world to its knees. The resulting restrictions and physical distancing slowed down all economic, academic and social activities in Stellenbosch, just like everywhere else on the planet. Yet the area’s estate agents reported being in demand throughout lockdown as potential buyers wanted to assess available properties using virtual tours and online meeting platforms. 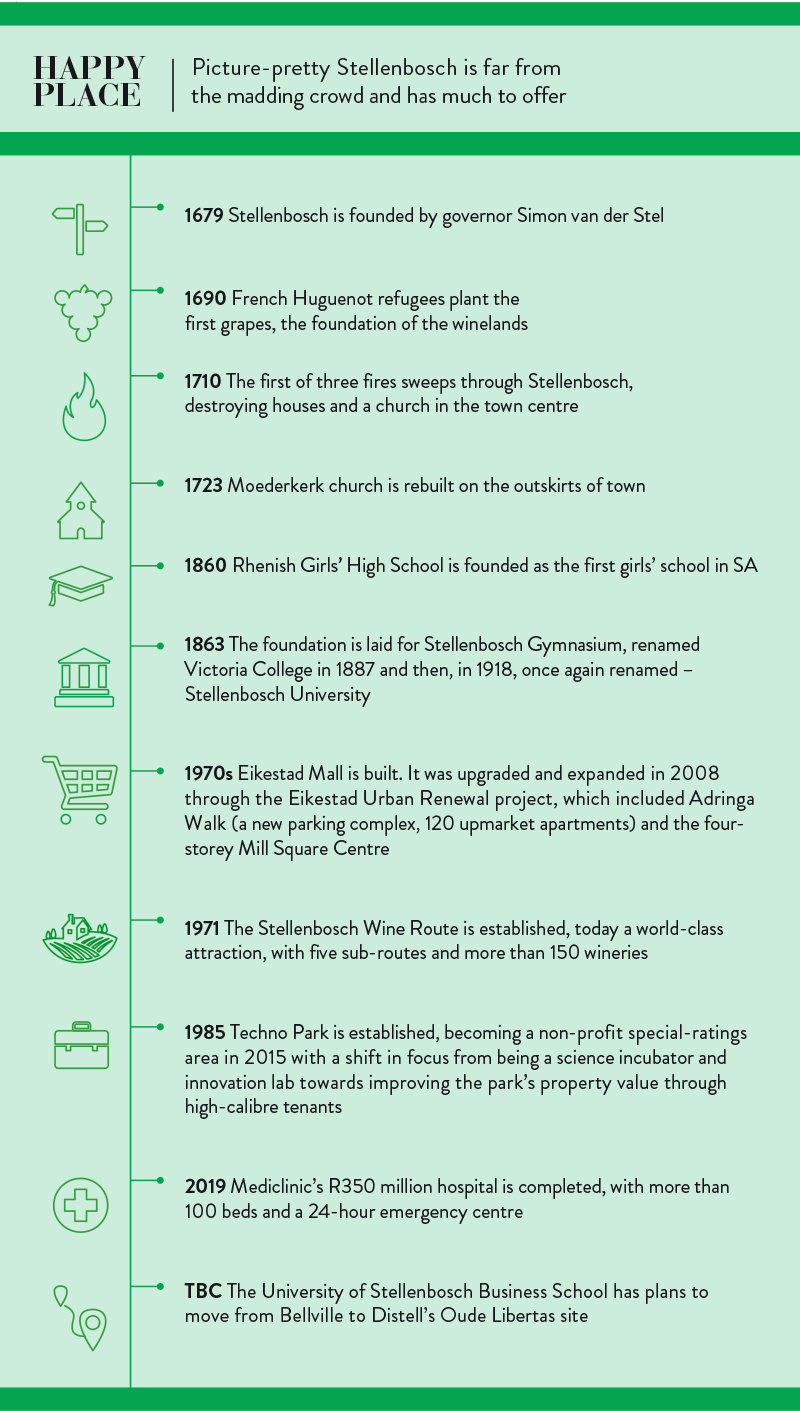 This reflects Stellenbosch’s status as one of the hottest property destinations for local and international investors. Who wouldn’t be charmed by this picture-pretty town with its Cape Dutch architecture in the shade of old oak trees, surrounded by sun-dappled vineyards and framed by the Helderberg mountains – a rural lifestyle in easy reach of Cape Town’s big-city vibes and international airport. And the beaches of Strand and Gordon’s Bay are also just a short drive away.

Stellenbosch is the second-oldest town in the country and has, over the decades, managed to hold its property value. Its capital growth opportunities are among the most lucrative in SA. Not surprising then, that some of the nation’s most influential businessmen are based here. Big names such as Johann Rupert (Remgro), Christo Wiese (Pepkor), Whitey Basson (Shoprite), Jannie Mouton (PSG Group) and Edwin Hertzog (Mediclinic) belong to the Stellenbosch old boys’ network of billionaires, who are connected to the town through their homes, education or business interests.

However, they are just some of the high net-worth South Africans and other nationalities who are drawn to what is known as ‘Golden Triangle’ at the foothills of the Helderberg mountains towards Somerset West, which produces some of the world’s best wines. 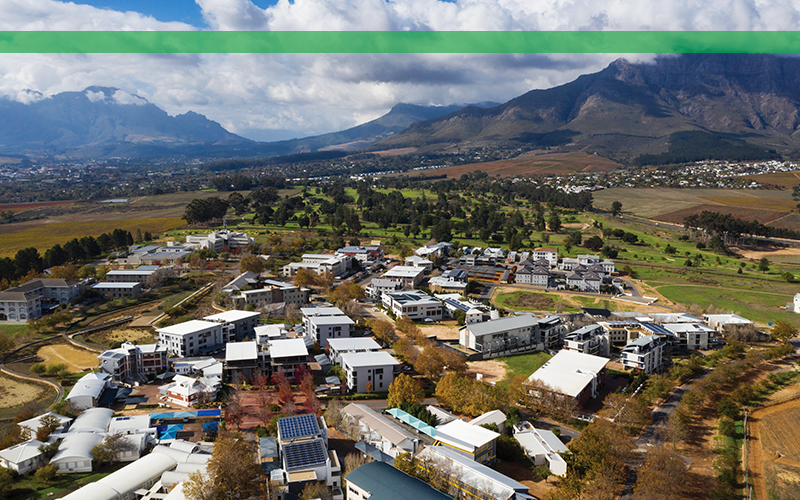 In fact, the 2019 New World Wealth report reveals that Stellenbosch, Paarl and Franschhoek are home to nearly 3 000 South African dollar millionaires. Wealth in this region rocketed by 21% over the previous year, which the report attributes to the presence of a number of tech companies and Capitec Bank.

‘There’s a lot of money flowing into the area,’ says Giel Viljoen, principal at Leapfrog estate agency in Stellenbosch. ‘We’ve seen quite a few new security estates coming up over the past five or six years. But what makes Stellenbosch’s property market unique is the large investment in student accommodation. Growth has been incredible over the past five to 10 years.’

And property investors have not been scared away by COVID-19. Quite the opposite, in fact. ‘The pandemic has led people to re-evaluate their lives and many are looking to make dramatic changes to their lifestyle, such as moving out of the city,’ says Suzette Deacon, area specialist agent for Peter Venter Estates. She has noticed a massive interest in Stellenbosch wine farms from overseas. ‘The winelands offer an unparalleled outdoor lifestyle in scenic surroundings, a slower pace of living with endless space,’ she says. ‘Also the rand exchange rate is very favourable for the international market, which makes it affordable for overseas buyers with a passion for wine – not to mention the bragging rights that come with owning a wine farm in South Africa.’

An entry-level wine farm can cost upwards of R20 million, while the price tag for a large commercial farm in the Golden Triangle can be as much as R250 million, according to Deacon. But discretion is king in this market; many of the wine farms that are currently for sale are never advertised and their names are hushed up, because their owners don’t want to give rise to speculation that could upset their business.

Meanwhile, in the town of Stellenbosch, Pam Golding Properties was so confident in the appeal of a new, upmarket apartment complex that it was launched during the lockdown restrictions. Called ‘The Worx’ and developed by Abacus, the property features 50 apartments (from R1.45 million) in Dennesig, which is being marketed as the town’s ‘next de facto student hub’. The area will be connected by a shuttle bus to town and, the property agency says, it forms part of the university’s green route, which encourages students to walk to campus, with safety measures that include additional lighting. 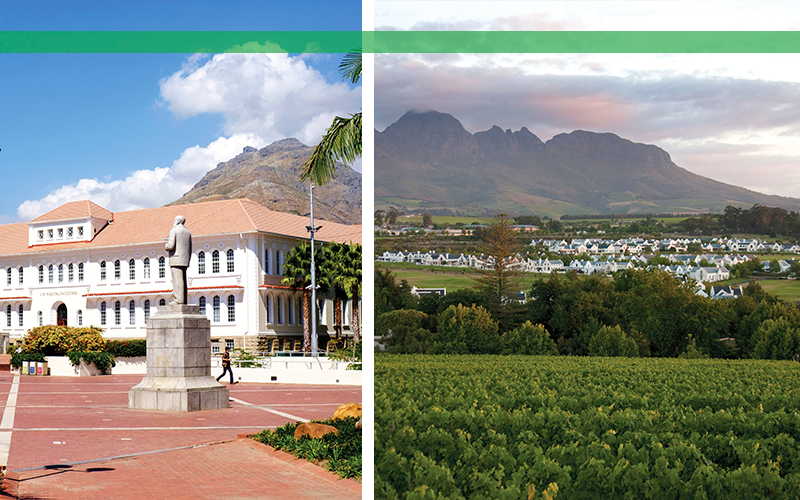 ‘We expected it to do well and we have not been disappointed,’ according to Louise Varga, manager of developments for the Boland and Overberg at Pam Golding. She said in May that such developments attract considerable interest even during challenging economic times, because they are traditionally considered a safe investment. ‘Sectional-title property prices in Stellenbosch continue to show steady growth, with capital growth well above the national average,’ said Varga. ‘It also underlines investor confidence in this historic town where the perennial demand for student accommodation – coupled with the increasing expansion of commercial and economic activity in the area – are major factors in the residential property market.’

The demand for private student accommodation is a major investment driver in ‘Stellies’, as the university has around 30 000 students but just 6 500 residence places on-campus. Engineering student Lloyd Watermeyer managed to secure a coveted ‘res’ room after some tense weeks on the waiting list.

‘It’s very convenient as my lectures are only 600m away from my res and everything else is also in walking distance. That’s one of the things that attracted me to Stellenbosch: it’s so easy to get around,’ he says. ‘It’s a brilliant town for students, because everywhere I go, I meet people that are my age.’

He marvels at the wide range of activities on offer. For instance, Stellenbosch students (known as ‘Maties’, while their rivals from UCT are ‘Ikeys’) have a proud sporting tradition. Rugby is particularly big, with large crowds attending the intervarsity matches against the Ikeys as well as the Maties’ home matches in the national Varsity Cup competition.

There’s much to do in Matieland, even on a student budget. Stellenbosch offers a rich cultural programme with music, theatre, festivals, galleries and its own art route. The surrounding countryside is ideal for hiking and mountain biking. There are several indoor and outdoor artisanal markets, such as Root 44, the Slow Market, Blaauwklippen Family Market and Organic Farmers’ Market. And of course there’s the world-famous Stellenbosch wine route with more than 150 wine farms and estates, offering wine tasting, gourmet restaurants and accommodation.

These attractions and more are welcoming visitors and locals back with the lifting of pandemic restrictions, injecting the joy of life back into Stellenbosch.

Jane Molony, executive director of PAMSA, on how paper and its  by-products are a... END_OF_DOCUMENT_TOKEN_TO_BE_REPLACED