Less than a century ago, Cape Town’s Foreshore was immersed in seawater. Street names such as Strand and Waterkant still indicate that the area stretching from today’s harbour to the Castle of Good Hope was once part of Table Bay. The old shoreline bordered along what is now the main railway station. At some stage, sandy beaches covered Thibault Square. And the original Harbour Pier, built in 1913 with a pavilion for ballets and concerts, stood where the elevated freeways now pump rush-hour traffic through the city.

Occasionally construction teams still come across historic reminders, such as the pieces of the pier that were found during excavations for the Cape Town International Convention Centre 2 (the R900 million centre extension that was officially opened in January 2018). Or at the far end of the Foreshore, on Roggebaai canal near the Waterfront, where geotechnical engineers had to overcome debris of ‘old rock-filled docks’ when building the foundation of the R1.5 billion Yacht Club (a luxury residential, office and hotel complex launched in April 2019). Most of the debris has no heritage value, and according to the South African Heritage Resources Agency, only one historic vessel has been found in situ below the Foreshore: the Dutch Nieuwe Rhoon, during the construction of the Civic Centre back in 1971. 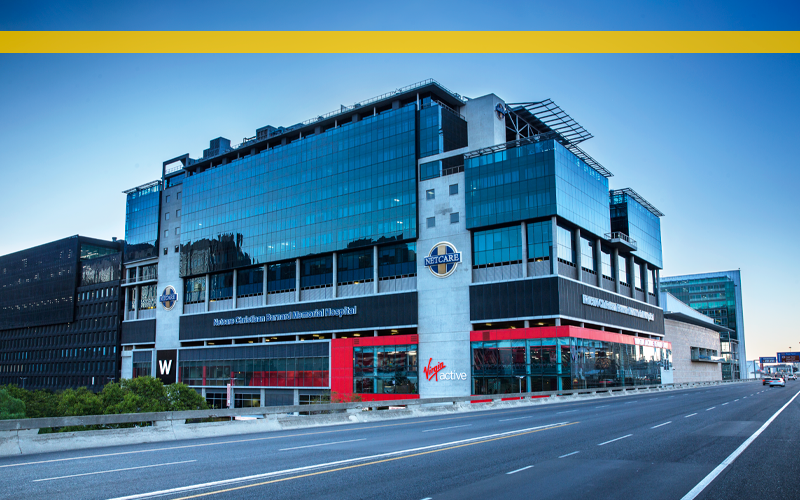 A lot has happened since the land was reclaimed from the sea in the late 1930s to early 1940s. The Foreshore is currently experiencing a new wave of property investments. FNB’s Portside tower may have inspired this renewed confidence in 2014, when it became the tallest green building in South Africa (139 metres; 32 storeys) and the first sky scraper to be built in the city centre in 15 years.

‘Eleven developments to the value of approximately R15.1 billion in the Foreshore area have been approved by the City of Cape Town over the past six months. This includes the Harbour Arch development of R14.8 billion,’ according to City of Cape Town spokesperson Luthando Tyhalibongo.

Some of the grey, tired and outdated office buildings on the Foreshore have already been revamped into stylish works of glass and steel. Others are currently being repurposed, such as the 1970s Absa tower, which is being converted into the mixed-use Foreshore Place comprising more than 150 apartments. The Metlife Centre will become the Sky Hotel and feature residential units.

Brand-new corporate buildings and hotels are also rising up. In 2016, Netcare’s Christiaan Barnard Memorial Hospital relocated to a new purpose-built 16-storey building next to the CTICC, which also houses a Virgin Active gym. Growthpoint is planning a two-tower development with retail, commercial and a hotel on vacant land next to the ENS and Investec buildings on Lower Long Street. Known as ‘Site B’, it is still waiting for rights approval by the Municipal Planning Tribunal.

While some projects are finally bringing residential units to the Foreshore, they are high-end rather than the much-needed affordable-housing units. Social activist groups protesting against this ‘spatial apartheid’ have intensified the political wrangling and heated emotions in debates about the Foreshore. 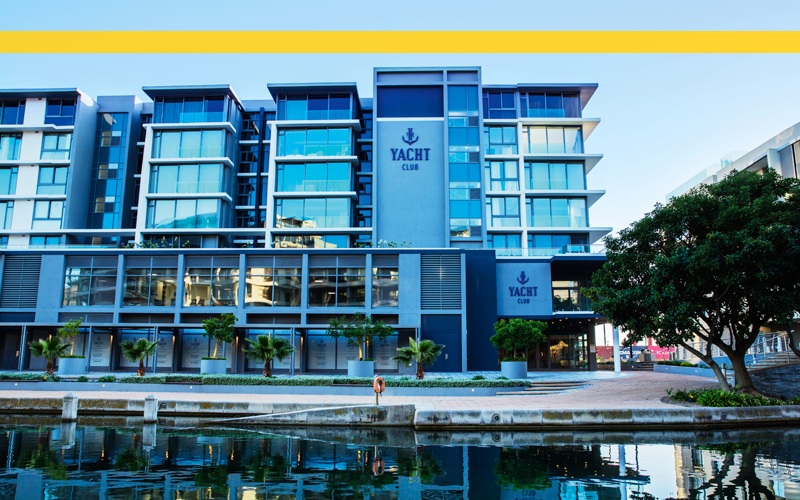 The latest private investment is no exception. In October 2019, the City of Cape Town officially approved the R14.8 billion mixed-use Harbour Arch after long delays. Marketed as the largest mixed-use development of its kind in central Cape Town, it will change the skyline by adding six gleaming towers. The 5.8 ha site occupies former Transnet land in the Culemborg area where the N1 and N2 meet.

‘Excavations, bulk earthworks and lateral support have commenced and Phase 1, inclusive of the construction of Tower 1, is scheduled to be completed within the fourth quarter of 2022,’ says Nicholas Stopforth, MD of Amdec Property Development, the company that is also behind Melrose Arch in Johannesburg. ‘Construction of Tower 2 will begin in the latter half of 2020,’ he adds, forecasting ‘an extensive timeline’ for the entire project.

The first apartments currently on the market range from small studios (35 m2, from R2.1 million) to three bedrooms (109 m2, from R6.05 million), with the highest ones located on the 23rd floor. The precinct will feature shops and restaurants at street level and, according to Stopforth, ‘an additional retail podium will be situated on the eighth level, accessible to visitors via the precinct’s six interconnected towers’. His vision for Harbour Arch is a high-end shopping experience, smart city and ‘central hub to live, work, play within’, striving to ‘stylishly reinvigorate the Foreshore area’. 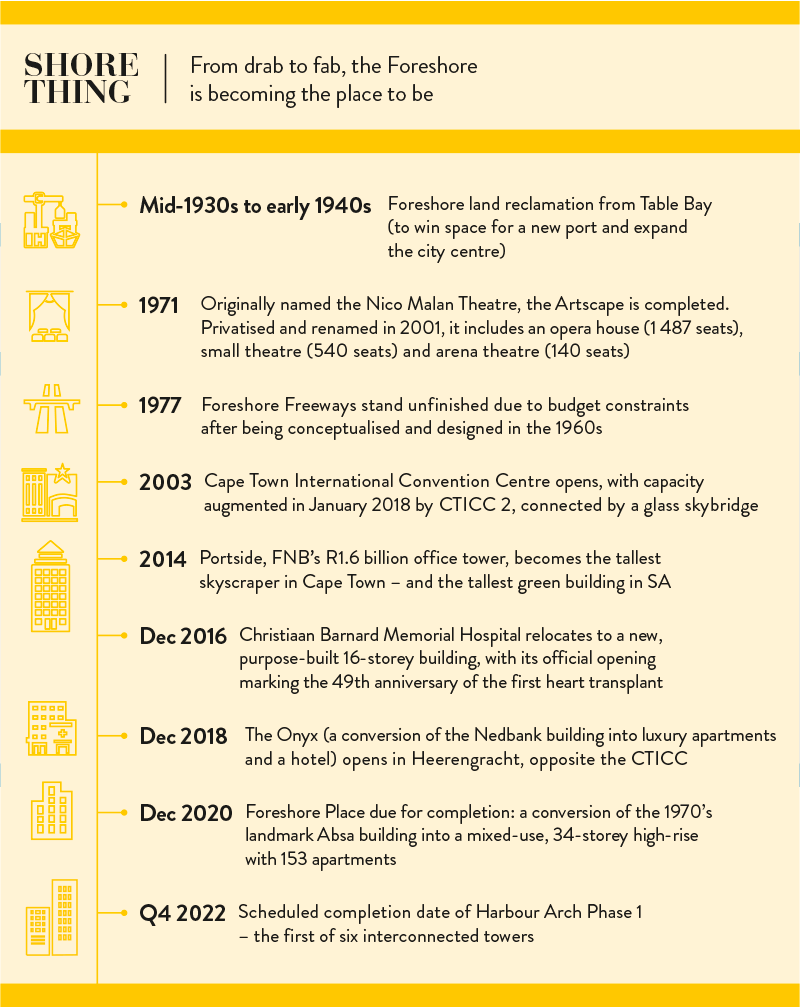 The entire Foreshore would benefit from a long-term vision and revamp. On the harbour side it still resembles an unpolished, rough stone, albeit in a stunning setting. Wedged between the port and the CBD, it forms part of the famous postcard view of the Mother City draped at the foot of Table Mountain, as seen from across the bay. Its proximity to the Waterfront and CBD is a massive drawcard for potential investors, businesses, hoteliers and residents.

According to Guy Briggs, partner and head of urban design at architectural firm dhk, property developers are further attracted to the Foreshore because the area is still relatively underdeveloped, and has fewer heritage restrictions and larger parcels of land than the adjoining CBD. ‘Yet there are plenty of issues that make it unattractive to people,’ he says. ‘The Foreshore doesn’t have any real character, it’s windswept, and the freeways separate the city from the ocean. All this creates a sense of disconnection.’

Rashiq Fataar, director of Our Future Cities – a think-tank consultancy that advises on more equitable, progressive and liveable cities – agrees that in its present state, the area is lacking ‘good urban design and placemaking’. He suggests that future developments should focus on bringing together the isolated pockets around the existing Foreshore buildings, improving the spaces between the buildings to connect them into one holistic, vibrant area that appeals to a wide cross-section of people. 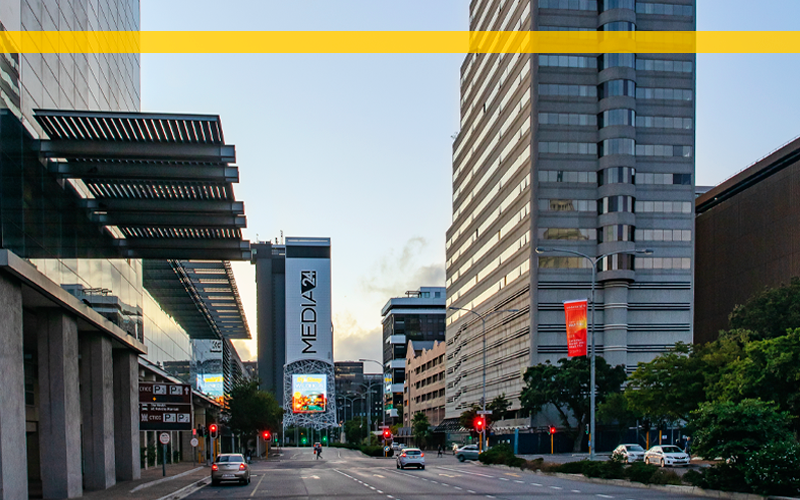 ‘At the moment, the Foreshore is not walkable or welcoming to the pedestrian,’ says Fataar. ‘What we should do is connect the dots between the Civic Centre and the MyCiti bus terminal, which has poor lighting and lack of wind protection, and the adjacent Artscape theatre, which is a major cultural hub close to hospitals, businesses and the CTICC.’ To inject some character into the area, he calls for courtyards, squares and shelters as well as a good mix of retail and businesses, which would invite people to spend time there beyond their nine-to-five workday.

An online forum discussing the merits of the Foreshore yielded this comment: ‘Outside of office hours it can be a strange experience walking from the CBD to the Waterfront where the bit passing through the Foreshore can almost feel like some post-apocalyptic deserted city.’ In the same forum, another user enthused about the Onyx, the striking black reinvention of the former Nedbank building on Heerengracht, saying: ‘This is going to do wonders for the “foot-traffic” and resident density in that part of town. Combine this with a few other large, planned residential towers and we could reach a constant presence on the streets, day and night.’ 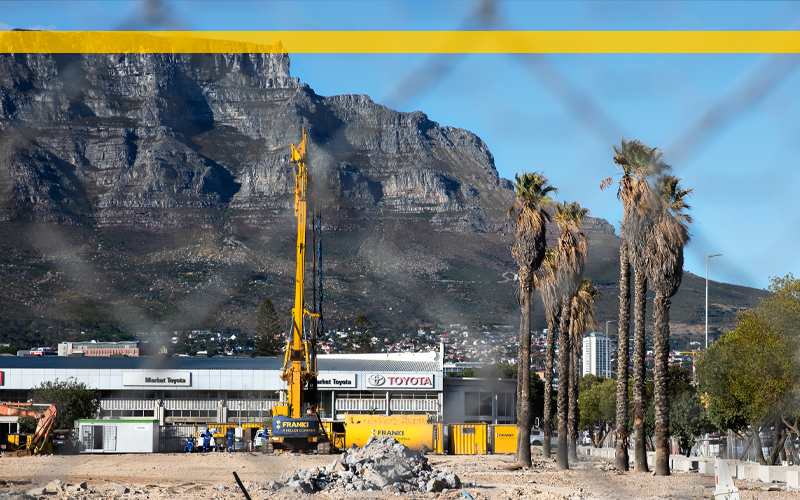 Just how much walking the residents and hotel guests of the opulent Onyx actually want to do is not certain. They reportedly comprise European and African billionaires, and many residents are said not to use a parking bay, in the age of Uber. However, investors buying an Onyx penthouse receive a complementary Jaguar F-Pace SUV with their purchase, says John Rabie, the founder of boutique developer Signatura, in an online statement.

The Onyx, officially opened in December 2018, has repurposed the former bank building into high-end apartments and Newmark hotel suites with a maritime spin. Architect Robert Silke’s ‘luxurious, yacht-like terrace features in crisp white’ form a dramatic contrast to the shiny black facade. ‘The brief was to make something aspirational and beautiful and give it a genuine joy and frivolity,’ says Silke. ‘And there was a budget available to do it.’

This is a far cry from Silke’s brief for the City of Cape Town’s (now abandoned) Foreshore Freeway project, for which he designed the preferred bid that was submitted by Mitchell du Plessis Associates (MDA). The city had requested proposals to tackle the unfinished freeways – reminders of botched urban planning since the 1970s – and to develop the 6 ha of prime land around them, while solving issues of traffic congestion and apartheid spatial planning. As one of six shortlisted bidders, MDA won the first round with its proposal to complete the freeways and build 11 tower blocks of varying heights on the strip between them. The R8 billion project would see about 3 200 market-related residential apartments cross-subsidising 450 affordable ones. However, the city cancelled the bidding process in mid-2018 after it was alleged to be flawed.

‘We believe that if the Foreshore freeways are completed, the area will re-energise itself and become the heart of Cape Town again, after 25 years of decentralisation towards the southern and northern suburbs,’ says Ian Taylor, managing director at MDA. He told Earthworks that ‘positive vibes’ from city officials had given him hope the plans might still happen. Meanwhile dhk’s Briggs, together with Fataar in a 10-company partnership, has suggested the ‘CITYLIFT’ approach, which drops the freeways to the ground and lifts the city over them, creating a new neighbourhood that stretches 1 km along the harbour edge.

Talking simply about space, politics aside, he says the Foreshore needs a masterplan that prioritises ‘public spaces that work’ and that encourage pedestrian movement instead of focusing on ways to make private vehicles move faster.

‘It should be about creating connections and public spaces; about restructuring the current Foreshore environment to find ways through properties, connecting people so they enjoy walking from the railway station to the Waterfront,’ says Briggs. ‘It’s fundamental that Cape Town gets this right from the start.’

Jane Molony, executive director of PAMSA, on how paper and its  by-products are a... END_OF_DOCUMENT_TOKEN_TO_BE_REPLACED