You don’t have to be passionate about rugby to enjoy Loftus Park, although it does help. Tshwane’s new green office, retail and leisure precinct lies next to Loftus Versfeld stadium in Arcadia – home of the Blue Bulls rugby team and also used by Mamelodi Sundowns soccer team. Its marketing tag line ‘Tackle, work, play’ clearly alludes to the game of rugby that is tangible across the development. The building project is still ongoing, with Phase 2 set to take the square metres under development to a total of 55 000 over the next few years.

During the recent Rugby World Cup, the normally calm, upmarket precinct buzzed with excitement as nearly 7 000 spectators from all walks of life came together in the open-air piazza to watch the Springbok matches transmitted live from Japan. 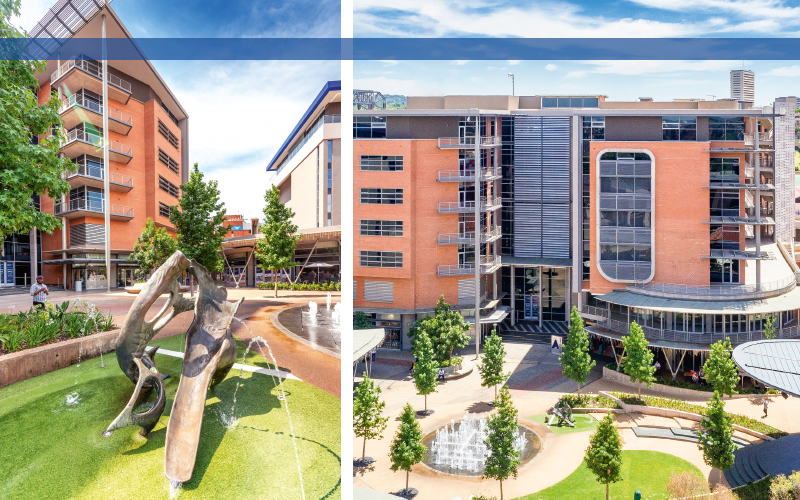 The giant screen in the centre of Loftus Park is used to show whatever big sporting event is happening, and the stage hosts music, performing arts and other live events such as market days and yoga. However, SA’s magical World Cup victory brought the public focus back to rugby and its starring role across the development. ‘Throughout the architecture we have tried to explore the game of rugby. For instance, the piazza is designed in the shape of a rugby ball,’ says Pieter Strydom, asset manager for Redefine Properties, which is the real-estate investment trust that jointly owns Loftus Park in equal share with property developer Abland. 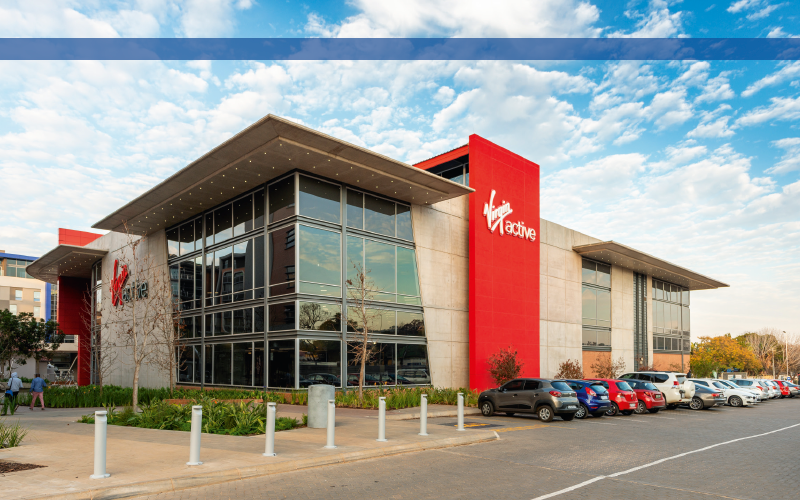 ‘We also have several artworks in and around the centre depicting rugby themes to make game-day visitors feel at home. The key highlight of course remains the fact that the stadium and the centre lie next to each other like two peas in a pod,’ he says. ‘Furthermore, the close proximity to the training fields makes the centre an ideal hangout spot for the Bulls as well as the Springboks when they are in town. Regular visitors to the centre often find themselves in queues behind rugby stars like Duane Vermeulen and Handré Pollard, among others. All of these elements bring the sport to life even outside the stadium.’

The long-awaited Phase 1 was officially opened in May 2018 with a ribbon-cutting ceremony. The Loftus Park concept had been introduced in 2013, with former Springbok player and Abland director Thinus Delport promoting the development to the public. The sod turning took place in September 2015. The bulk earthworks project that followed was a feat in itself. The entire site had to be excavated 10m deep to accommodate two levels of basement parking – an important feature as Loftus Park has to provide additional parking spaces for stadium-goers on match days. In total, 260 000 m³ of earth was excavated and removed from the site in 43 000 carted trips.

According to the developers, the core component of Loftus Park is the P-grade office space that covers 15 780 m2 across two buildings. ‘The majority of our office tenants are in the legal and medical professions,’ says Ruan Lottering, who is the marketing manager for Loftus Park. More than 80% of office space has already been leased to advocate chambers, medical offices and financial institutions, among others. ‘The leasing activity has picked up considerably from a year ago as economic sentiments have lifted,’ says Strydom. ‘We are looking into a multitude of options for Phase 2 but any development that we undertake needs to respond to the needs of the local market.’ 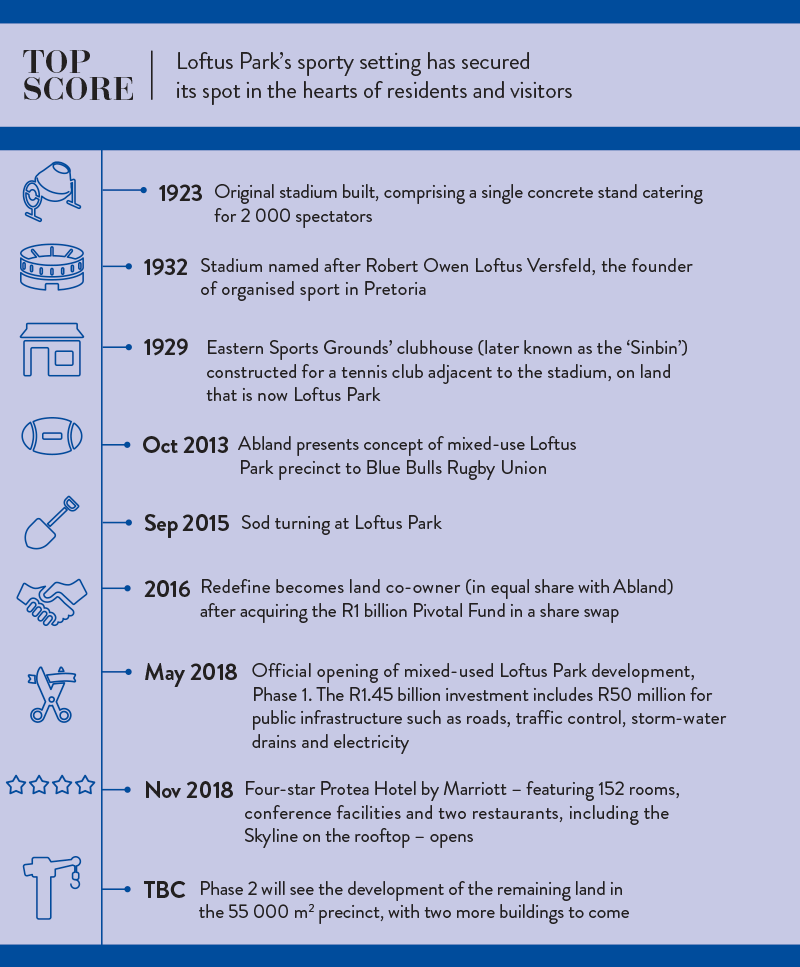 There has been talk of bringing a hospital to the precinct, but this can’t be confirmed at the moment. ‘We’ve still got about 10 000 m2 to develop and haven’t yet finalised what exactly we’re going to do,’ says Lottering. ‘Phase 2 will take place in the next year or two. As it’s a demand-driven development, we are not bound by a set timeline.’

Earlier this year, radio station Pretoria FM opened a satellite studio overlooking the piazza with its water feature, big screen and stage. Perched in a glass structure, the studio invites passers-by to pause and witness a live radio broadcast. Only a few steps away is the new centre that houses a premium Virgin Active gym. On offer are some of the latest fitness crazes, such as a family studio where parents and their children can exercise together; a heat studio and suspension yoga. 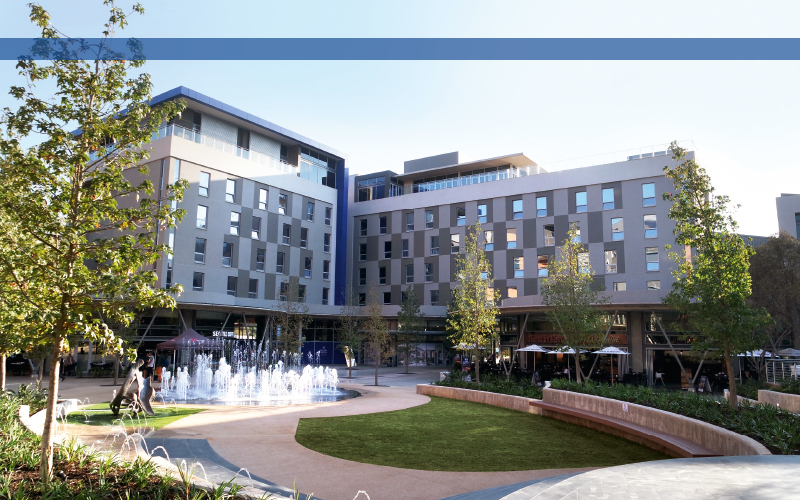 Phase 1 also saw the launch of new shops and restaurants. Anchor tenants Woolworths, PNA, Checkers and Dis-Chem feature next to smaller speciality shops (selling biltong, vitamins and supplements, and designer clothing) as well as services such as banking, eye care, hair and beauty salons. There are also a variety of restaurants (including Turn ’n Tender, RocoMamas and Salsa Mexican Grill) as well as coffee shops (Vovo Telo and Seattle Coffee Company), which attract office workers, locals and visitors from the nearby embassies, the five schools and the university in the area. Another bonus is the walkability of the precinct and its close proximity to the rapid bus system and the Gautrain.

In November 2018, a four-star, 152-room Protea Hotel by Marriott opened in the precinct, bringing another two restaurants into the mix. One of them is the Skyline Restaurant, Lounge and Bar, situated on the rooftop with panoramic views of the city and its jacaranda trees.

When earthworks magazine contacted Pretoria-based rugby writer Brendan Nel to get his impression of the precinct, he laughed. ‘Funny you should call me now; I’m just at Loftus Park. I do a lot of my shopping here.’ He says it’s a huge improvement over the previous area, which had been used by tennis and bowling clubs but over the years had become rundown and ended up as a car park for the stadium and a supporters’ pub. ‘The area around the stadium has now become much safer and family-friendly. There’s a nice vibe and it’s a place where friends and family can meet, where people actually want to spend some time,’ according to Nel. ‘A lot of visiting rugby players use the Virgin Active gym, and the coffee shops are usually quite busy. What used to be a dead area has become a hub of activity.’

One historic landmark has been restored and stands small but proud among the modern buildings: the ‘Sinbin’, which was dilapidated and used as a pub when the developers bought the land from the Blue Bulls Rugby Union. After being reconstructed, it is now home to the Vovo Telo coffee shop. 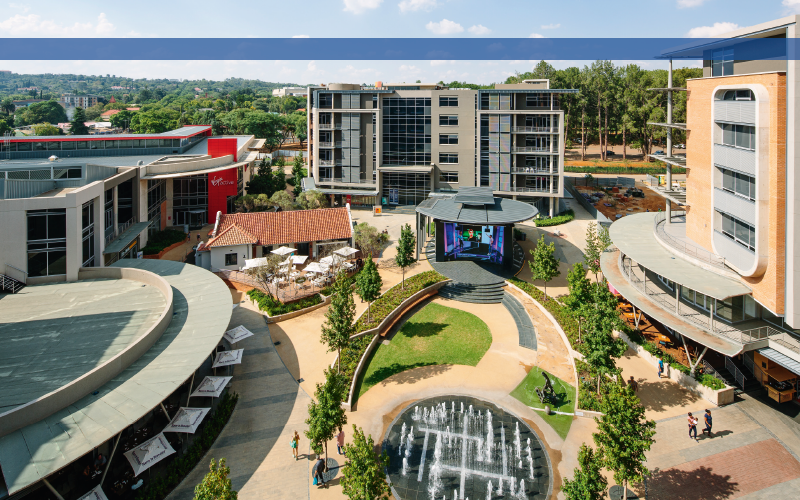 The building dates back to 1929, when it was built as the Eastern Sports Grounds’ tennis clubhouse. The architect is unknown but as one of Tshwane’s few remaining historical clubhouses, the building is protected under the National Heritage Resources Act.

The simple, neo-Cape Dutch clubhouse is ‘quite a unique building with a white-plastered face-brick plinth’, says Dirk Henzen of Studio 3 Design, the firm responsible for designing Loftus Park’s masterplan and restoring the Sinbin. ‘After years of neglect and abuse, the building was in a very bad state,’ he says. ‘It wasn’t always a clubhouse for tennis and bowls, but became a nightclub and drinking hole,’ he says. ‘The building is slap bang right in the middle of the piazza, so we approached the Heritage Council [regarding] how to proceed with the excavations for the basement parking. It was decided to deconstruct and later reconstruct the Sinbin, which we took apart brick by brick and stored in a warehouse until we could eventually restore it to its former glory.’

The lengthy process had some educational benefits, says Henzen, as architecture students from the nearby University of Pretoria were invited on-site to observe and learn. He adds: ‘It’s a feather in the cap of the developers that they kept the Sinbin as a contrast between the old and the new.’ The ‘new’ in the precinct is decidedly high-tech, for instance the state-of-the-art access control and number-plate recognition. ‘We are preserving history but are also openly embracing the future with fast connectivity through fibre, WiFi and solar power,’ says Strydom. ‘We have also adopted green-building techniques to ensure it is future-fit, and Loftus Park carries a 4-star Green Star rating from the Green Building Council.’ 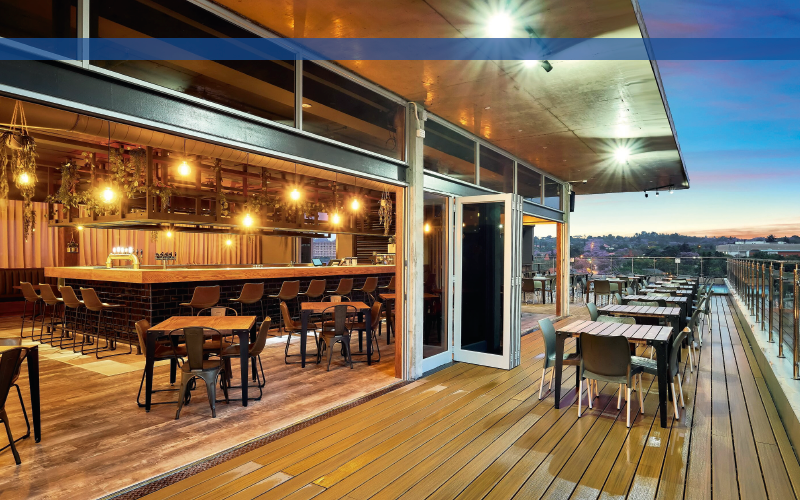 The green elements include a smart building management system that controls the air con and heating to limit energy consumption; and LED energy-saving lights, as well as recycling and waste sorting, the use of solar power, an advanced greywater collection system and water-saving devices throughout the precinct.

Passive building elements also play a role. To obtain approval from the GBCSA, the architect optimised the building orientation and size of the floorplate, kept the building height to six and seven floors and used window shutters for shade. It was also important to harmonise with the scale and height of the stadium and the adjacent Clydesdale residential area. ‘We used off-shutter concrete to blend in with Loftus Versfeld, which has quite a reddish Kirkness brick,’ says Henzen. ‘I would describe the design as having a modern look and feel but not conventional: it’s about glass and steel and beautiful spaces, but definitely not a glass box.’ 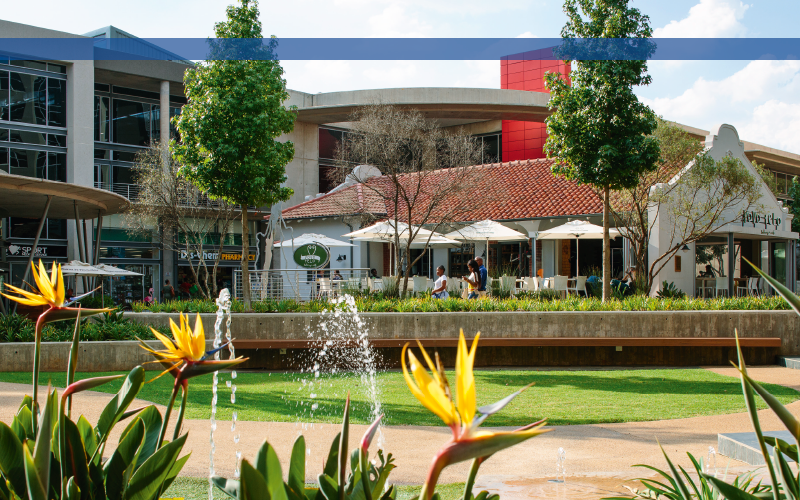 One of the unusual design features is the poetically named Pool of Light, which is a light-well that channels natural light down into the basement parking. ‘When you’re in the parking area, light is spilling in to create a focal point that guides you to the lifts, escalators and stairs,’ says Henzen.

The result is a mixed-use experience that is closely linked to rugby, which according to the architect is the first of its kind in SA. The real beauty of it is that you don’t have to be a rugby fan to appreciate it.

Jane Molony, executive director of PAMSA, on how paper and its  by-products are a... END_OF_DOCUMENT_TOKEN_TO_BE_REPLACED