As the story goes, Paul Kruger – back when he was president of the Transvaal Republic – imported a load of corrugated metal roofing sheets for his farm near Rustenburg. By the time the sheets arrived, Kruger’s farmhouse had expanded, and there weren’t enough sheets to cover the roof. After a moment’s thought, Kruger in-spanned his oxen and had them roll the wheels of his wagon over the iron sheets, flattening them out and making them just wide enough to fit. That, they say, was the origin of the old Afrikaans saying, ‘’n Boer maak ’n plan’ (a farmer makes a plan).

Nobody really knows whether that story is based on fact or not – but what’s certainly true is that corrugated metal sheets were a feature of the many mine towns that sprung up along the Witwatersrand during SA’s (and Australia’s, and California’s) gold rushes at the turn of the century. Houses, shops and churches – dubbed ‘tin tabernacles’ by British churchgoers and early frontiers folk – had their walls and roofs built out of those ubiquitous corrugated galvanised iron sheets, decades before those same sheets became the building material of choice in townships and informal settlements across SA.

Indeed, ‘silver shacks’ – where the walls and roof are made of shiny, corrugated steel sheets – are much sought-after in SA’s low-income areas, for the same reasons that Paul Kruger wanted it for his farmhouse roof. They don’t rust, they don’t rot; they’re cheap to make and easy to install; and they seem to last forever.

They’re trendy, too. In late 2015, Architects without Borders wowed SA’s Design Indaba with Casas Melhoradas, a double-storey, low-cost house created to improve housing conditions for low-income groups in Maputo, Mozambique. The house featured a ground-floor concrete base, with another lightweight double-storey wooden and corrugated iron house on top. Then influential architecture magazine Dezeen featured a corrugated aluminium-clad building called Tinhouse, which ‘celebrates corrugated metal sheeting, commonly used on the agricultural buildings of the rural landscape. It does so in a thoroughly contemporary way by using mill-finished corrugated aluminium as the external cladding for both roof and walls’. That will certainly help, given its location facing the unforgiving climes of Scotland’s Outer Hebrides.

Corrugated iron sheeting was actually originally developed in and imported from the UK – the first units made from wrought iron. By the 1890s the material had changed to mild steel, which was (and remains) easier to stack and move around the globe. It also lasted longer than timber, with a hot-dip galvanised finish preventing the rust that often comes with remote farms and mining outposts.

The repetitive folds, which Kruger’s oxen are supposed to have flattened out, are another key part of the material’s longevity. That shape makes the sheets stronger, allowing even lightweight metals such as aluminium to withstand decades of bad weather and exposure to the elements. Today, corrugated sheets are often coated in polyester paint or PVC plastisol to increase their economic efficiency and aesthetic value. The base metals are interchangeable (zinc, copper, tin, you name it), and even the shapes of the grooves can be customised from the classic S-rib or inverted box rib profiles.

As to the material’s undying popularity? Maybe it’s the stark, spartan look that attracts designers and architects to corrugated sheeting. More likely, it’s the sheer toughness and surprising energy efficiency of a good, old-fashioned tin roof. A study funded by the US Department of Energy, conducted by the Oak Ridge National Laboratory and published in 2013 found that metal roofs ‘showed the potential for substantial energy savings compared to an asphalt shingle roof, which was used as a control for comparison’. 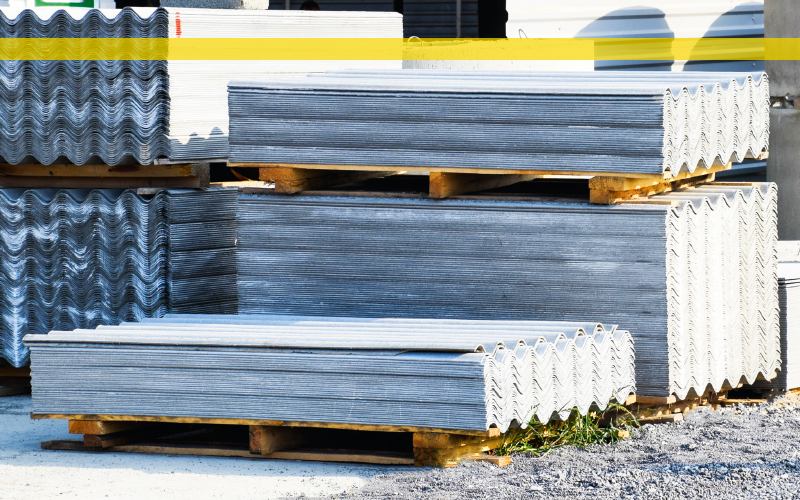 The researchers used a solar spectrum reflectometer and an emission meter to conduct their three-year study, which confirmed that the high solar reflectivity and emissivity levels of cool metal roofing can greatly mitigate the effects of urban ‘heat islands’. The study found that metal roofing that was attached with a batten/counter-batten system, which allows airflow underneath, resulted in a 45% decrease in the flow of heat, leading to a 25% cut in cooling costs. Corrugated metal sheets are also greener than many other materials, in that they contain up to 40% recycled steels, and are completely recyclable at the end of life.

And that, on its own, would be enough to sell the idea of corrugated metal sheeting to builders of all stripes. But a range of new, environmentally friendly technologies are now emerging to add another layer of utility to the material. For example, while the energy-saving properties make corrugated sheet metal such an effective heat retainer, they are also one of the product’s biggest drawbacks. Step into a ‘silver shack’ in the heat of a SA summer’s day, and you’ll feel like you’re entering an oven. While working in Cape Town’s Blikkiesdorp (literally, ‘Tin Town’) settlement in 2013, entrepreneur Mark Algra experienced the insulation problem and developed a solution to make life inside those corrugated box houses more comfortable.

Algra’s Thermotrap Project attaches a layer of durable white fabric to both sides of the corrugated metal sheet. This deflects the sun’s rays while creating air cavities (perfect for insulation) under the ridges of the metal. Added to this is Thermocrete, a mixture of polystyrene beads and cement which, when poured over the corrugated sheets, creates a fire-resistant plaster coating to further enhance the insulation. 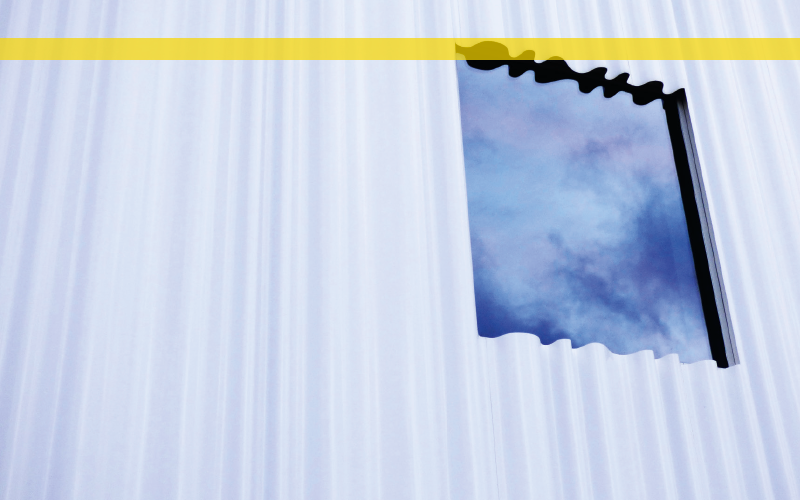 ‘You’re taking the heat that is normally transferred into the surface, which is zinc or steel, and it’s completely covered,’ Algra is reported as saying. ‘The sun’s rays don’t even touch it and whatever little bit does […] is reflected because we’ve painted it white. It’s like if you walk in a road and you put your hand on a white car and then a black car or a silver car, you can feel the difference in the heat. That’s the difference; you want to reflect the heat.’ The project formed part of the World Design Capital 2014 showcase, and moved into a second design phase in 2018.

The past year has also seen global companies exploring new ways of enhancing the energy efficiency of metal roof sheeting by building solar panels into the material. For example, Estonian company Roofit recently launched a two-in-one solution that combines corrugated metal roofing material with an ultra-thin (0.5 mm) PV layer. It promises a lifetime of more than 50 years for the roof materials, and 85% of initial power output from the solar panels after 30 years.

When Roofit co-founder Andres Anijalg pitched the product at the Ecosummit Berlin in mid-2018, he was brutally honest about its place in the market. ‘Our roof is about two to three times cheaper than Tesla’s solar roof,’ he said, placing it in direct competition with the US company’s shingle-style design. ‘When we started the installation of our first roofs, we identified a gap in the market. Traditional PV companies have no idea how to install a traditional roof, and vice versa; traditional roofing companies have no clue what a PV [roof] is,’ he added. To close that gap, Roofit has developed software that enables the end customer to predict the cost and power generation figures for their home, along with installation plans for third-party roofing companies.

Swedish company Midsummer, meanwhile, also brought an integrated solution to market recently, combining its flexible, thin film solar panels and its corrugated metal roofs. The company claims that these roofs provide the best of both worlds: the solar panels promise 90% of installed peak power after 10 years (and 80% after 25 years), yet they are strong enough to be walked on and have an expected lifetime of 25 years. ‘In recent years, solar energy and the installation of solar panels has grown rapidly across the world,’ Midsummer CEO Sven Lindström told Solar Builder magazine. ‘In order for this development to continue and for even more customers to be attracted by it, products with stylish design are required. We take the next step in this development with our refined metal roof, [the] Midsummer solar roof. With the solar panels pre-integrated into the roof, this product is a no-brainer for both new buildings and for many older buildings.’

Midsummer reports that it is rapidly expanding its production capacity to meet the increasing demand from mainly the US market; and it is looking into issuing green bonds of up to kr500 million (US$52 million, or R760 million). That seems a long way from Paul Kruger’s farmhouse, or from the ‘silver shacks’ of SA’s townships. But is it really?

Corrugated metal roofs have remained popular precisely because of their simplicity, their cost effectiveness and their energy efficiency. Adding layers of enhanced insulation or power-producing capabilities only adds to the value of what is already a proven product. Sure, you don’t want to get caught in a ‘silver shack’ at high noon in the middle of summer. Nor do you want to hold a conversation under a tin roof during a hailstorm.

But, as Roofit’s Anijalg told the delegates in Berlin: ‘Our roof looks awesome, it makes economic sense, and regulation will come that forces people to take this solution.’

Jane Molony, executive director of PAMSA, on how paper and its  by-products are a... END_OF_DOCUMENT_TOKEN_TO_BE_REPLACED