Due in part to its concrete facade, rough brick and floor-to-ceiling windows, 37 Commerce Crescent looks like it went up in the last year or two, designed to tap into our seemingly insatiable appetite for an industrial-chic aesthetic that speaks to an urban work ethic and an honest, no-frills approach to space.

Yet this is certainly no new build: the 2 500 m² gross lettable area (GLA), A-grade development in the Kramerville Creative District is in fact a revamp, and represents one of the many ways that building owners and property developers are tackling the challenge of using predominantly old buildings in Johannesburg, and indeed, SA. In the ever-increasing pursuit of sustainable buildings and certification through Green Star ratings, various adherence models have emerged over the years: new builds, revamped or renovated buildings, and the sustainable management of old structures, among others. 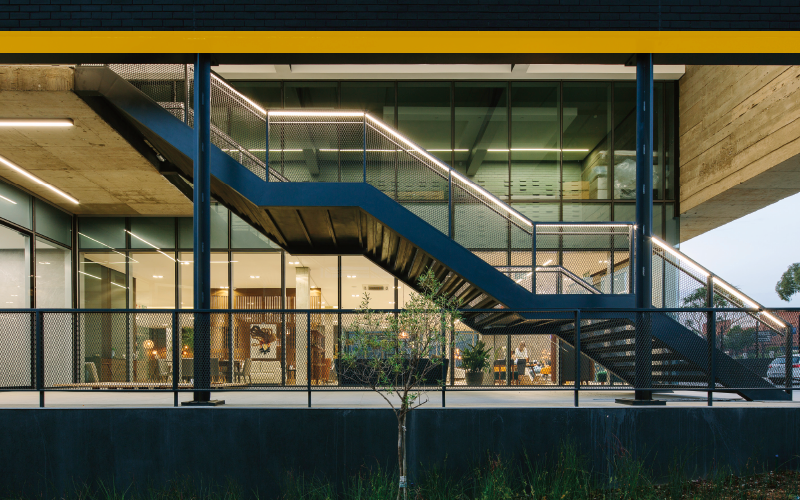 37 Commerce Crescent is one of the inbetweeners, a revamp that’s been recognised for its achievements in reinventing itself. It’s truly been given a new lease on life. The property, set among the growing commercial buildings in the developing node of Kramerville, lies just off South Road – a convenient stone’s throw from Sandton and a short drive to the M1.

Its renovation can certainly be put forward as an example of best practice for structural renewal at a time when budgets are limited and there’s often no ready cash to spend on new builds. The cherry on the top is, of course, the fact that, with its smaller footprint, a nip and tuck is also better for the environment than starting from scratch.

According to James Welsh, of James Welsh Consulting, the quantity surveyor on the project, the aim of the 37 Commerce Crescent project was to ‘repurpose’ an existing building ‘from a warehouse to a modern showroom and office building, which included adding an additional floor’. In addition to Welsh, the 37 Commerce Crescent team included architects Paragon, project manager Astek and building owner Alchemy. Paragon’s Kim Newell, chief architect on the project, says: ‘In the current economic climate, developers just don’t have large amounts of capital available for developments.’ 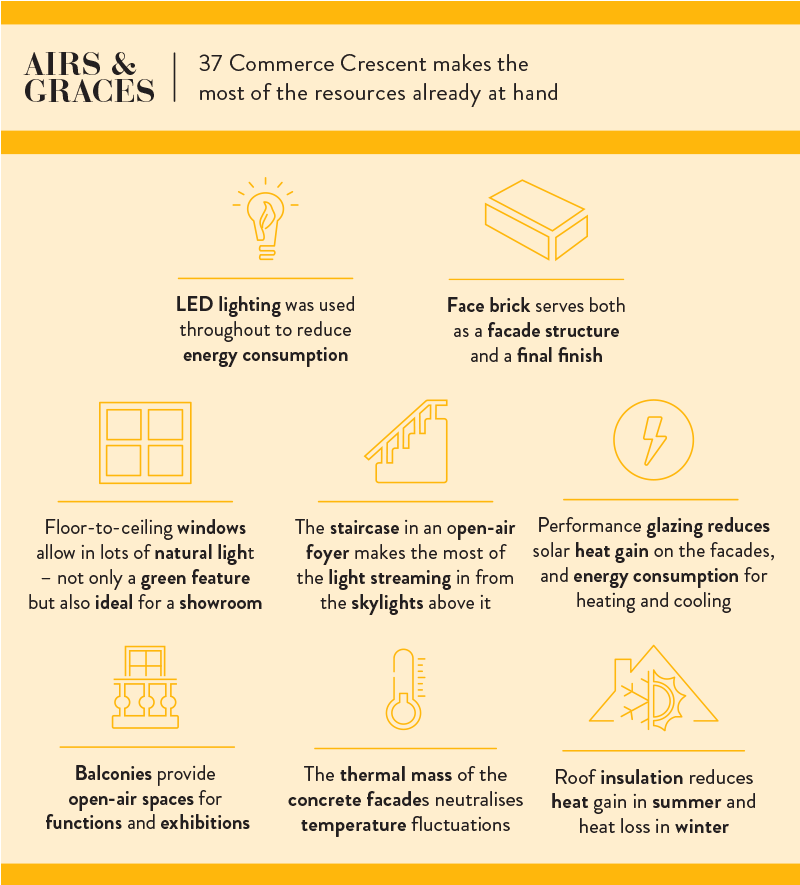 However, she adds that this building proves that simple materials used in creative ways can transform an old warehouse into something new and interesting. ‘We worked within a tight budget and a short eight-month construction period, but managed to transform the building,’ she says.

By reusing the existing structure, Paragon was able to make the development feasible. The original building at 37 Commerce Crescent was a two-storey warehouse with a steel roof. During demolition, the steel roof structure was disassembled, and a further floor added. The original roof structure was then reinstalled. The result? A multi-tenanted retail space with the bigger occupants on the upper floors and the lower-ground level divided up into spaces for smaller tenants. While this was just one of the many changes, it was significant – delivering value by expanding the lettable space.

The architectural design drew inspiration from its industrial setting. Concrete was chosen for the structural expansion, and off-shutter concrete – that raw-concrete look achieved when shuttering is removed – was used as a textured facade material. This is not only extremely durable and hard-wearing but aesthetically appealing too. ‘We had to get creative with the facade materials to stay in budget,’ says Newell, adding that the remaining facades were constructed of face brick, which had economical as well as practical advantages.

Using face brick produced a facade structure, and a final finish in a single material. The brick facades were stained black to enhance the aesthetic even further, as well as delivering an added bonus of it being maintenance-free for the building’s lifespan. ‘By using a typical or traditional building material – the brick – in an unconventional way, we also managed to achieve a new aesthetic,’ says Newell.

Meanwhile, an abstract pattern formed out of recessed bricks, which runs down the face of the building, gives the facade a tactile quality. ‘This not only articulates the texture of the exterior of the building, but the interior too,’ according to Newell. ‘The facade, when experienced from the interior, echoes an inversion of the texture.’ For the architect, the most satisfying aspect is the brick facades. ‘We worked hard to develop the aesthetic – and the play of light on the facade and the texture we achieved with the bricks worked successfully.’ 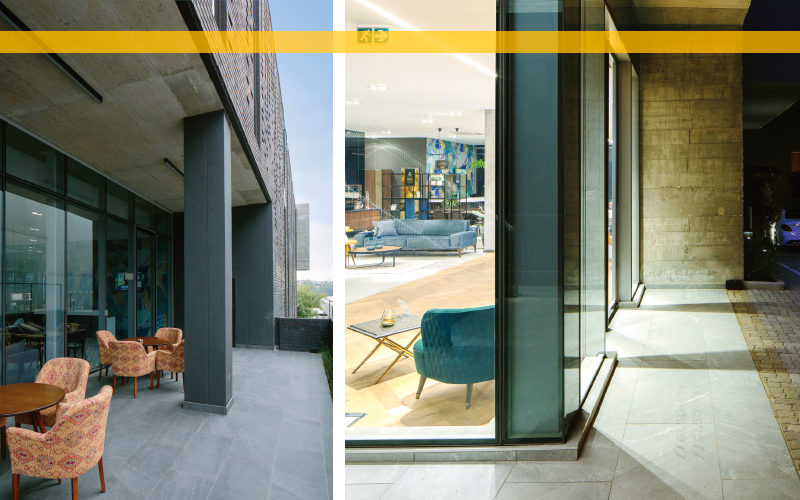 The fact that the large windows allow light to stream into the space has also drawn praise. The skylight installed above the open-air staircase floods the atrium with diffused natural light, while thick concrete walls on the west facade help to mitigate heat gain in the sweltering summer.

Sustainability was always top of mind when planning how to reinvent the space. LED lighting was used throughout to reduce energy use; contractors used performance glazing to reduce the solar heat gain on the facades, and to lower the energy consumption costs of heating and cooling the building. Insulation was installed below the roof sheeting, reducing heat gain in summer and heat loss in winter, while the concrete facade added thermal mass to the building. Simply put, thermal mass is the ability of a material to absorb and store heat energy, ‘neutralising temperature fluctuations’.

Of course, there were challenges, too. According to Welsh, a revamp is often much more difficult than a new build. ‘It is not always the case, but on this project we were fortunate enough to be able to use a significant amount of the existing building, as the architects were able to work around the existing footprint and existing two floors – and to increase the return on the project by adding [a] floor. It therefore made sense not to demolish the existing building.’

From a quantity surveying point of view, he says, ‘the biggest challenge was to bring the project to completion within budget. We needed to clearly understand the architectural and engineering intentions or vision from the start and be able to interpret them financially’. Craig Baker, project manager at main contractor Astek Property Group, underscores the challenging aspects of the project – a tight timeline and budget. ‘[The partial] demolition aspect was also not very easy,’ he adds. ‘The roof structure needed to be disassembled and then reinstalled. ‘There was such a great sense of achievement when it was over all though. We got it done – and the building had a whole new floor,’ says Baker. Shafts for the lift and services needed to be demolished in the existing slab, and teams had to work within the building’s existing levels.

The floor-to-ceiling height on the lower ground was considered problematic and teams needed to compress the services into a very tight ceiling void. The existing floor slabs had to be scabbled away to allow sufficient waterproofing thresholds. On the upside, the reuse of the roof structure meant the existing steel structure could be adapted and used to tie in with the architect’s design. Steel cross bracing was repositioned to ensure the new skylight had unrestricted openings, and existing trusses needed to be modified to make way for box gutters that could sit inside the facade walls. 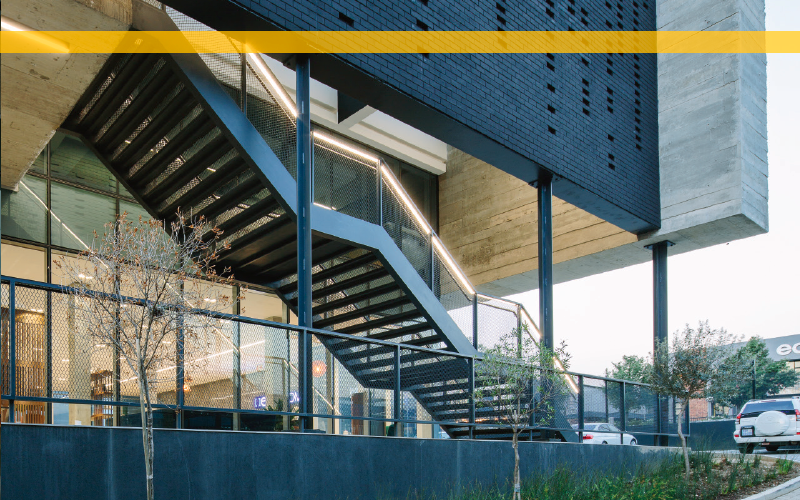 There are of course pros and cons with this type of reinvention. Baker points to the fact that it is more sustainable, costs less than a new build and one can still benefit from a great existing location. ‘The downside is that demolition can be tricky, an existing design may be limiting, and there could potentially be hidden problems with the existing building, such as mechanical, electrical and plumbing issues, etc,’ he says. ‘Thorough inspections need to be done.’

The new-and-improved existing building forms part of a larger development on Commerce Crescent, with No 37 being the second building to be constructed in the precinct. The off-shutter concrete aesthetic was also used in the design of the adjoining Casarredo building – and the material was re-used throughout the precinct to continue the look and feel. ‘Once [it is] complete, customers will have the opportunity to visit a variety of tenants in a pedestrian-friendly precinct,’ says Newell.

Overall, the improvement of the building will have a positive impact on the area once the precinct is complete, with the development transforming what was once an industrial street into a new retail hub.

Jane Molony, executive director of PAMSA, on how paper and its  by-products are a... END_OF_DOCUMENT_TOKEN_TO_BE_REPLACED